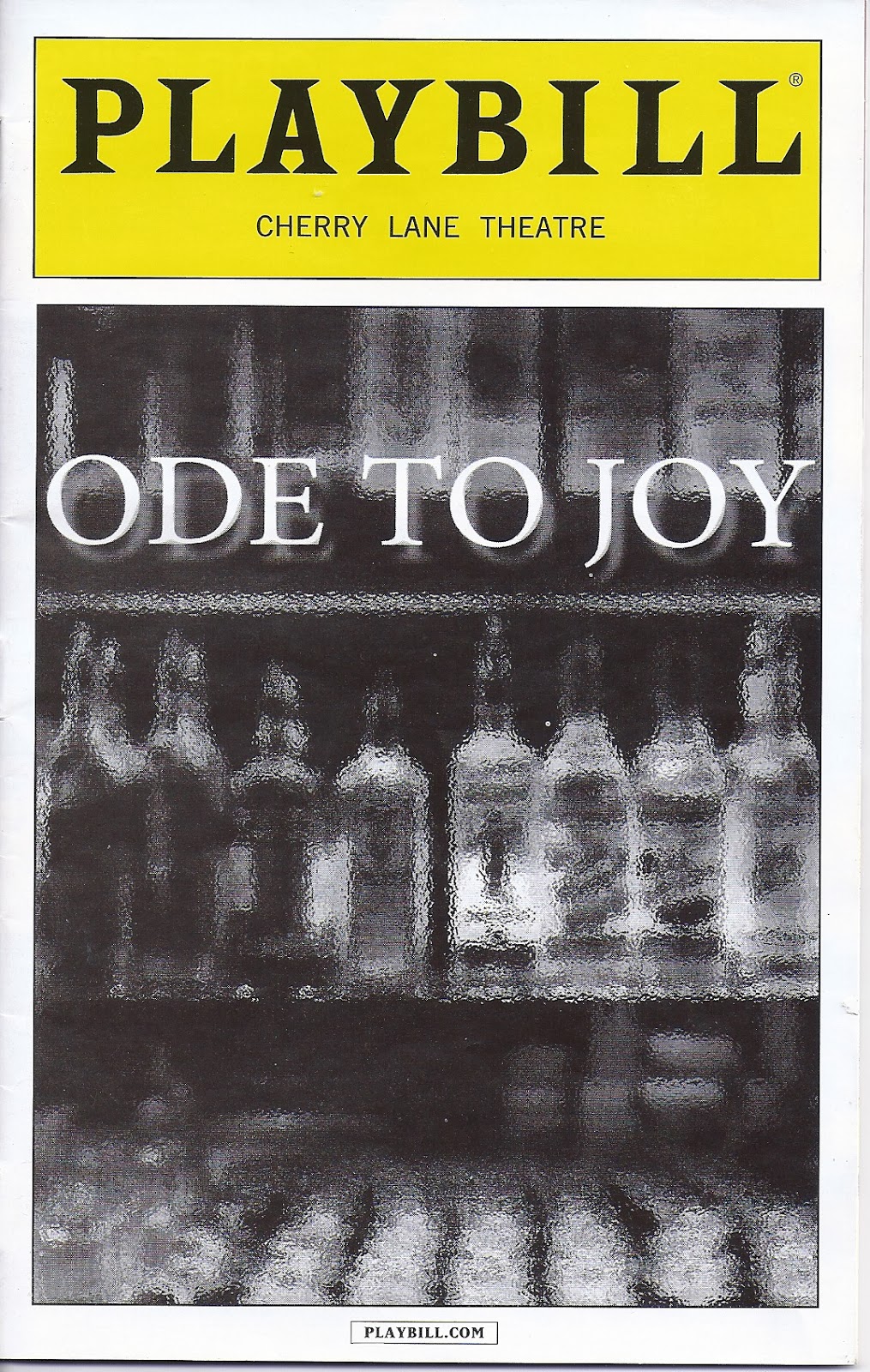 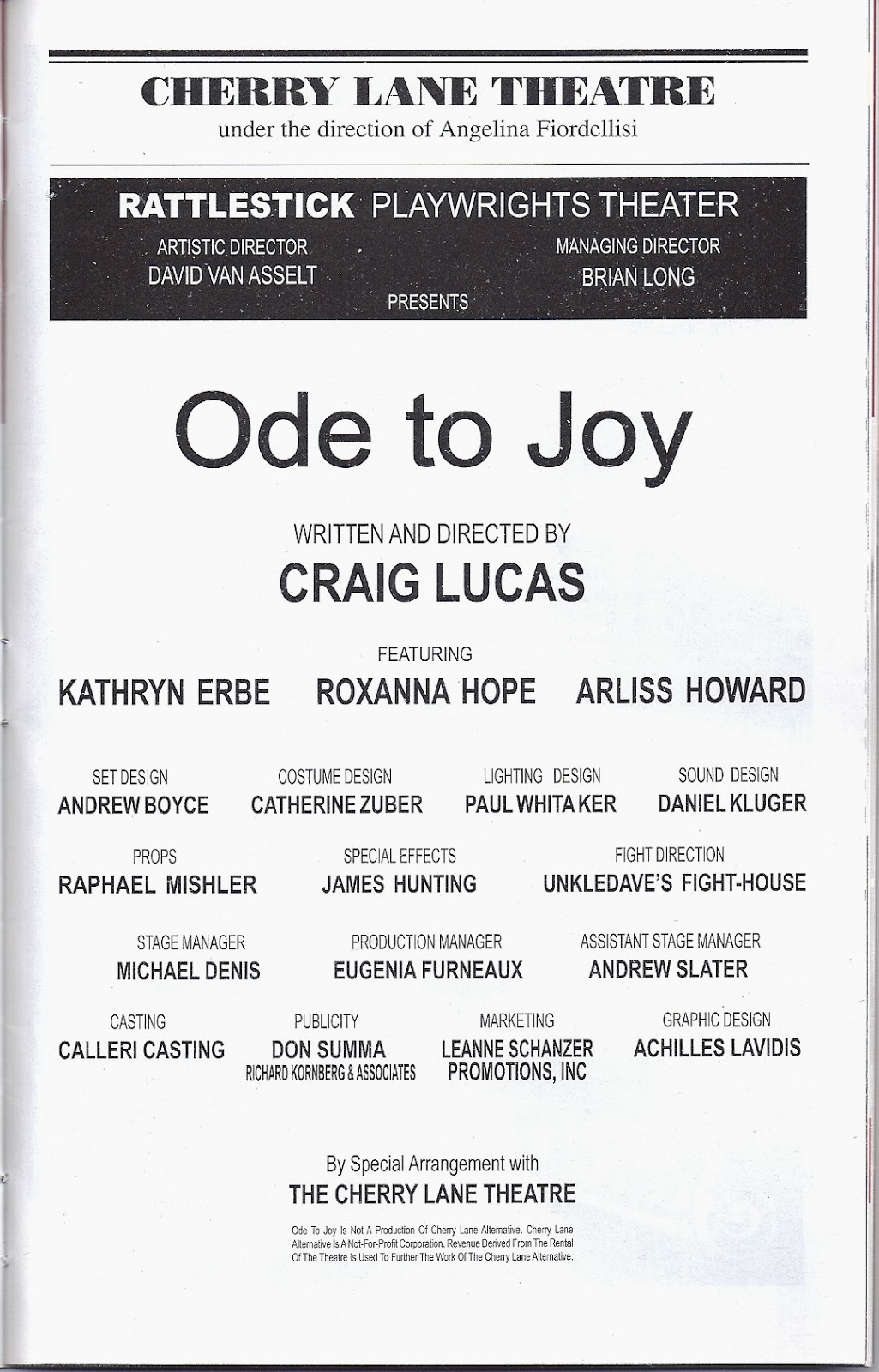 Despite its optimistic title, getting to the final scene of Craig Lucas’s new play, ODE TO JOY, when the suffering characters finally discover the presence of that uplifting feeling, is a rather joyless theatrical trip. Now playing at the Cherry Lane Theatre in a slow-moving staging provided by the playwright himself, the play has many dramatic elements, but few of them mesh artfully or convincingly, and the result is more an ode to depression and substance abuse than anything approaching joy. 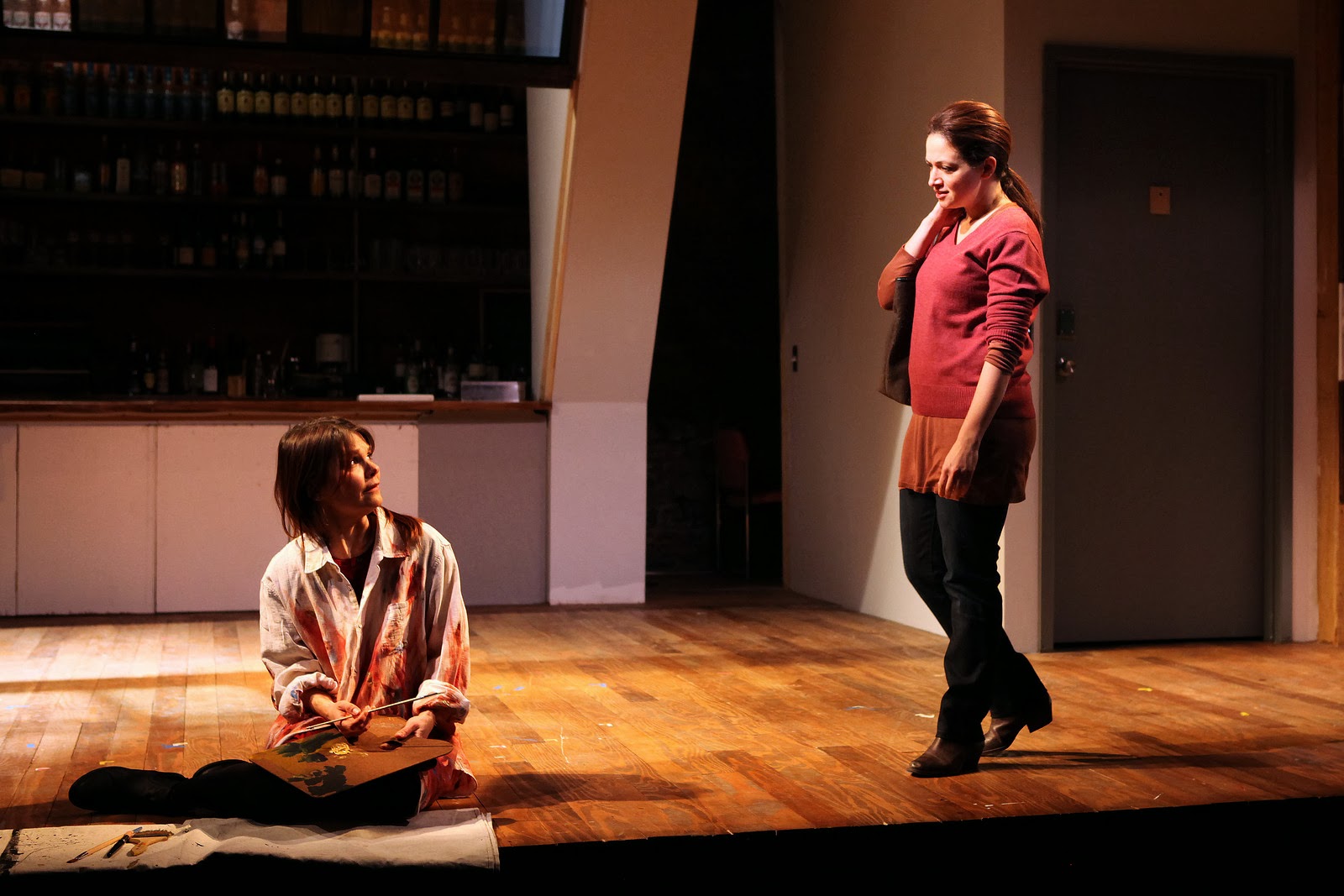 
The play takes place over a period of fifteen or so years, but it jumps around in time, beginning in 2014, flashing back to 2007, moving to 1999, returning to 2007, sliding back to the eve of the Y2K scare, going back to 1999, then on to Y2K again, and finally tying its loose ends together in the present day. The scenes occur on a set designed by Andrew Boyce for maximum flexibility to envision a variety of locales, such as an artist’s studio, a bar, a loft, and a hospital room. The various design elements, like Catherine Zuber’s costumes, Paul Whitaker’s lights, and Daniel Kluger, are all serviceable but not especially noteworthy, and the same might be said of the performances by the otherwise highly competent three-actor company.


Mr. Lucas’s themes concern drug and alcohol abuse (which he admits to having struggled with himself), the struggle of an artist to succeed commercially while refusing to abandon her noncommercial principles, and the ways we deal with pain and illness, both physical and moral, including how the artist transforms his or her anguish into beauty. The three characters, each of them the victim of some awful disease (in addition to the self-inflicted ones of booze and pill addiction) are Adele (Kathryn Erbe), an attractive painter whose work presents horrific (one character calls them “scary”) images that make it difficult to sell; Bill (Arliss Howard), a recently widowed cardiac surgeon diagnosed with prostate cancer, and also an alcoholic; and Mala, a pharmaceutical executive who becomes Adele’s lover, but is a victim of heart disease requiring a transplant. Bill and Adele also are romantically involved, and even marry and divorce twice, but, just as happens with Mala, Adele’s issues make it difficult for them to have a permanent relationship; a third marriage is in the offing at the end, allowing the play to reach what it hopes is a joyous conclusion, but after two hours of angst amid these talkative and unappealing characters, it seems highly unlikely that, for all their blather, any of them will find true bliss.

The play slogs along, building image on image, in language that, for all its occasional wallowing in profanity, sounds pretentious and unnatural. No hint is offered of how time is being manipulated for dramatic effect, so the sequence of events is cloudy; occasionally, time jumps occur without warning even within a scene. Now and then, Adele briefly addresses the audience, as if telling us her story, but not much is made of this and its presence seems unnecessary.


The actors demonstrate intelligence and clarity in their choices, especially when speaking Mr. Lucas’s often self-consciously elusive dialogue, much of it crammed not only with allusions to torture, but to obscure philosophical (think Kierkegaard ) and religious (think Jesus Christ) ideas; however, they’re unable to turn these characters into real people. Ms. Erbe, in particular, with her sweet and girlish features, is an interesting choice for the character, but she’s ultimately unconvincing as the self-destructive Adele.


There are a number of crude one-liners that spark sporadic laughter, as when Adele, dismissing Mala’s criticism of her paintings, says, “You don’t want a painting. You want an enema.”  At one point, when an accident occurs and Bill and Adele have blood on them, Bill gets turned on. Adele doesn’t find the moment amorous, but Bill recalls all the women on whom he’s performed cunnilingus when, let us say, it was their time of month. Coupled with dramatic incidents such as Adele’s vomiting in Bill’s mouth when making love, it’s hard to avoid feeling that Mr. Lucas is straining for attention.


ODE TO JOY seems almost like a Stations of the Cross  journey (in 12 steps rather than 14) for its characters as they trudge toward some form of salvation, especially when enlightenment is introduced by Bill in what he says have been verified as the words of Christ: “The kingdom of God is within us,” for example, or “True joy is acceptance.” Still, for all its upbeat pronouncements before the final curtain, Mr. Lucas’s new play is anything but an ode to joy.
Posted by Samuel L. Leiter at 11:09 AM