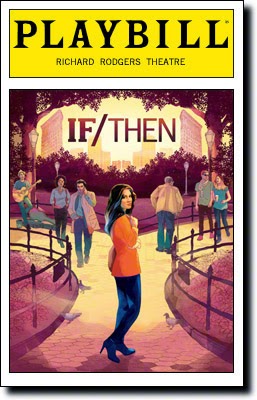 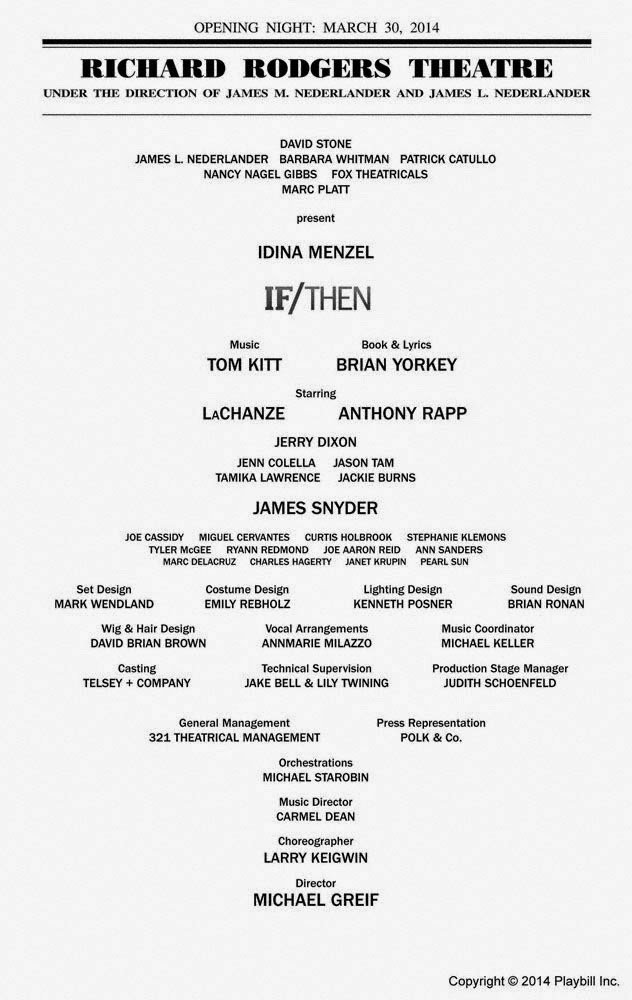 If Idina Menzel weren’t starring in this new Broadway musical at the Richard Rodgers Theatre, there’d be little interest in seeing it. When the star makes her first appearance, there’s a cannonade of applause and shouts, even greater than when Denzel Washington enters in A RAISIN IN THE SUN, albeit under less auspicious applause-generating circumstances. Ms. Menzel’s fame, recently boosted by John Travolta’s mangling her name to Adele Dazeem (or Nazeem, according to your source), is certainly warranted, and she belts and acts her heart out in this mediocre show, so perhaps her star power will fuel it for a while. The fact that the work was loosely inspired by the experiences of Ms. Menzel and her costar, Anthony Rapp, with whom she first came to fame in RENT in 1996, makes her personal connection to the show that much greater, so one can only wish the result were something more substantial. Michael Greif, who directed the stars in RENT, is also responsible for IF/THEN, which has a book and lyrics by Brian Yorkey and music by Tom Kitt, a team best known for NEXT TO NORMAL.


The show’s conceit is similar to that in the 1999 Gwyneth Paltrow movie, SLIDING DOORS; in the film a woman’s future depends on whether she catches a train. If she does, her life will go in one direction, if not, in another. The story allows us to see what happens on each path. (A slightly related idea supports J.B. Priestley’s 1932 play, DANGEROUS CORNER, which shows what happens when someone makes a chance remark at a party. Toward the end, the action reverts to the moment when that remark was made, but now it’s not spoken and the action moves in a less eventful direction.) In IF/THEN, Mr. Yorkey’s book explores the ways in which chance and coincidence, choice and fate, alter our lives irrevocably by having Elizabeth’s career and romantic life move along two parallel paths. One is represented by her Beth persona (for which she wears glasses), the other by her Liz persona (no glasses).


Idina Menzel, Anthony Rapp. Photo: Joan Marcus.
﻿
All takes place in an antiseptically appealing New York City, beginning with a scene in an idealized Madison Square Park that, with its blue cyclorama against which people and folding chairs are silhouetted, might just as easily be at the beach. This is one of those works about the city’s well-educated, sophisticated, attractive, young upward strivers. Elizabeth, who holds a Ph.D. in city planning, is a recently divorced woman nearing 40 who has moved to New York, where she puzzles strenuously over the life choices before her. As each of her potential lives is performed, the audience must take note as to which one it’s watching: in one Beth abandons romance (although wooed by her presumably bisexual friend, Lucas [Mr. Rapp], and her married boss [Jerry Dixon]) to become a powerhouse urban planner; in the other, Liz gives up her urban planning career to become a professor and marry Josh (James Snyder), a handsome doctor-soldier, with whom she has two kids. If she were to have it all, there’d be no show. The presence of her friend Lucas, a housing activist, and her lesbian friend Kate (LaChanze), a kindergarten teacher, complicate matters; the story becomes only fuzzier, as each of Elizabeth’s lives also means alterations in the lives of her friends—Kate with her lover (Jenn Colella) and Lucas with his (Jason Tam).

Like so many musicals today, the Sondheim influence is pervasive, both in the storytelling songs that move the action along, and in the dull melodies that underlie many (not all) of those songs and that mostly lack distinction. When Ms. Menzel suddenly launches into a song where she keeps asking, “What the Fuck?,” we get a breath of fresh air, even if at the expense of taste and plausibility. Of course, there’s a big 11 o’clock number, “Always Starting Over,” with which Ms. Menzel brings down the house, but it fails to save the show from a feeling of prefabrication.


It’s hard to avoid the impression that the plot was sketched out in workshops with suggestions from multiple contributors. Too many of the choices seem predictable.  There’s even a scene where, after Josh tries to pick Elizabeth up in the park and is more or less dismissed, he meets her on the subway some time later and the relationship picks up. The exact same thing happens in the new Off Broadway musical, A SECOND CHANCE, where it’s just as unsurprising. The show lacks edginess, tension, and suspense, and the characters are paper thin.


Of considerable value is Kenneth Posner’s lighting, which does its best to clarify which story line we’re watching, and Mark Wendland’s bi-level set, which allows for a huge mirror to hang at an angle over the proceedings so we can see the movement on the stage proper reflected overhead. This works very nicely during the scene in which the night sky is illuminated, a lovely effect even if so common this season someone could write a term paper on the many ways to show a starlit sky.


The performers are all at the top of their game, LaChanze being a charming standout among the supporting players. The sole reason to visit IF/THEN is Idina Menzel. If that’s what you’re after then you’ll enjoy the show. The choice is yours to make.
Posted by Samuel L. Leiter at 11:48 AM