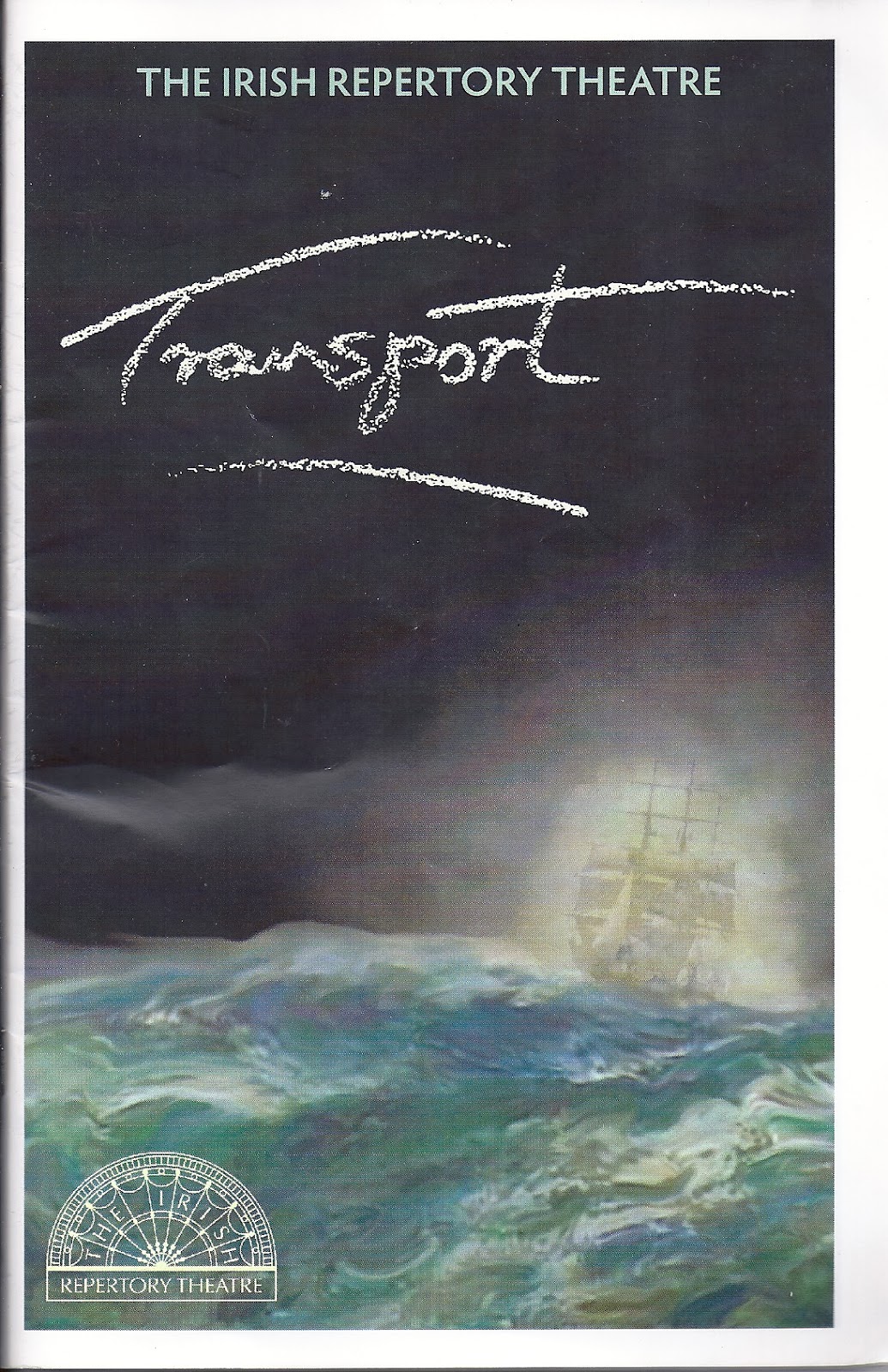 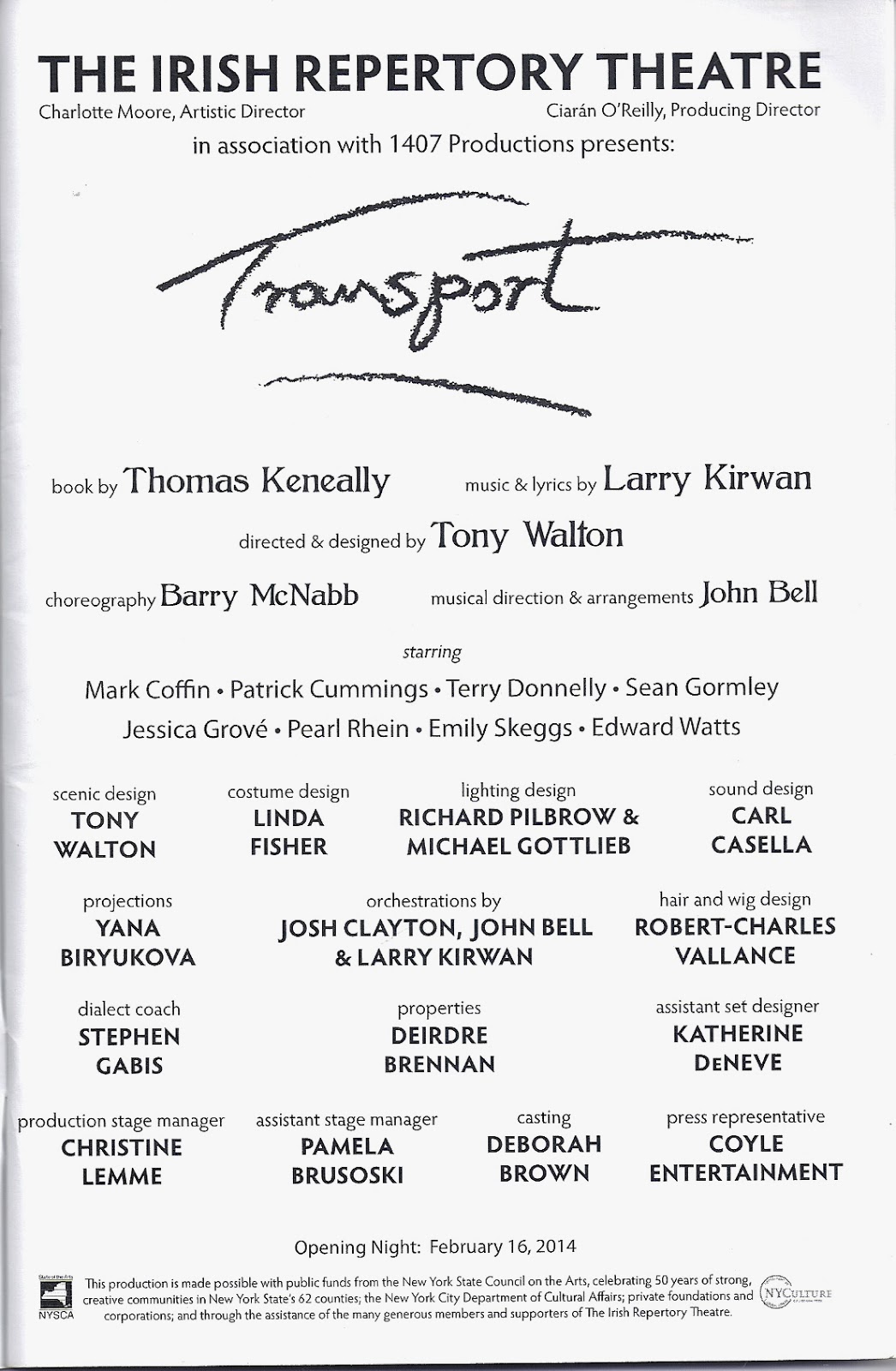 During the 1830s and 1840s the British government transported over 40,000 Irish women, mostly from the lower classes, to Australia, then mainly a penal colony for British and Irish felons. The women were intended as brides and sex partners for the convicts, and were transported after being found guilty of various infractions, serious, minor, and sometimes trumped up. (In the 1840s the Great Potato Famine would exacerbate the transport system when it was deemed necessary to reduce Ireland’s population.) The new musical at the Irish Rep, TRANSPORT, with a book by SCHINDLER’S LIST author Thomas Keneally and music and lyrics by Black 47 front man Larry Kirwan (recently responsible for HARD TIMES), places us aboard a transport ship, The Whisper, in 1838, as it makes its four-month journey from Cork to Sydney’s Botany Bay, with its human cargo of women and their male overseers. 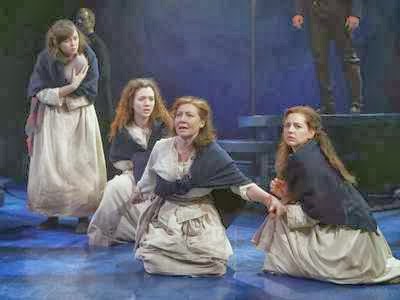 
Four stereotypical women are depicted, representing a microcosm of the many thousands who made the trip: Bride Riordan (Pearl Rhein), a widow convicted of stealing butter; Kate O’Hare (Jessica Grové), a redheaded rebel; Polly Cantwell (Emily Skeggs), falsely accused of theft and embracing her newborn child; and Maggie Carroll (Terry Donnelly), an odd, older woman with prophetic gifts. Their lords and masters are the ship’s duty-bound leader, Captain Winton (Mark Coffin), ruthless yet with hints of a softer side; Surgeon Delamare (Edward Watts), a tall, handsome, blonde in full leading man mode; and Hennessy (Patrick Cummings), a good-looking Irish soldier in the British army seeking a land grant in New South Wales. There’s also a rebel priest, Father Manion (Sean Gormley), whose politics have caused his exile. We must accept as a dramatic convention the sense that there is no one else on the ship but this handful of characters.


Only Captain Winton shows signs of villainy; all the others are kind to the women, and two men have romances with them, the doctor with Bride, whom he makes his hospital orderly, and Hennessy with Kate, although circumstances bring that story to a tragic end. No single character—all of them skimpily drawn—dominates the plot, which attempts to express each woman’s personal dilemma, an approach that dissipates the book’s dramatic thrust. With so many stories to tell, and the day to day trials of life aboard the ship (including a big and fatal storm) to convey, the show’s dynamic rapidly thins out as you begin to wonder just where—apart from Down Under—the story is going.There are also multiple themes woven in, political, social, and religious. Still, the subject matter is sufficient to sustain interest for much of the time, and, despite the questionable contrivances (do we really need two shipboard romances?) and “happy” ending, the 90 minutes (with one intermission) are relatively pain-free (except, perhaps, for the mutinous Kate, who—in another contrivance—gets severely whipped for trying to take over the ship so she can sail it to New York).


Larry Kirwan’s score for five musicians (piano, guitar, violin, drums, flute/whistles), combining the elements of traditional Irish music with a contemporary sound, are moderately successful, some more so than others, but not especially distinctive. They serve their dramatic purpose but quickly fade from consciousness. The cast sings them well enough, although not all the voices are of comparable quality (I heard a few flat notes), with Pearl Rhein’s performance being the most notable among the generally successful ensemble. With her strong personal presence, and rich, deep-throated vocals, she makes an excellent romantic interest for Edward Watts’s Surgeon Delamare, who assigns her the role of his hospital orderly.


The distinguished 79-year-old British designer Tony Walton (once married to Julie Andrews) has directed and done sets, lights, and costumes. His staging is a bit stilted, even with lively choreographic assistance from Barry McNabb, but I greatly appreciated his set and lighting contributions. The Irish Rep’s stage, with a thick pillar at one corner, is notably problematic, but Mr. Walton wraps a spiral staircase around it and makes it the bridge, albeit without the ship’s wheel. His flexible use of a small rampway under which the women sleep, and of a turntable (increasingly common this season), are effective, and his lighting creates magic on the stage’s bare walls, especially with the inclusion of a ship’s sail at the rear. The men’s costumes are standard for such characters, but I kept wondering if Mr. Walton’s keeping the women in white muslin shifts, shoulders and feet bare, was appropriate for a period in which the female body was never as exposed.


TRANSPORT introduces us to a little-known moment in 19th-century history and it does so through the entertaining ingredients of music, song, dance, and romance. The result, for all the subject’s inherent tragedy, however, is rather upbeat, especially when the show closes with the full cast singing a rousing song about arriving in “Au-stral-i-yay.” TRANSPORT, while moderately pleasing, is never quite transporting.
Posted by Samuel L. Leiter at 1:33 PM