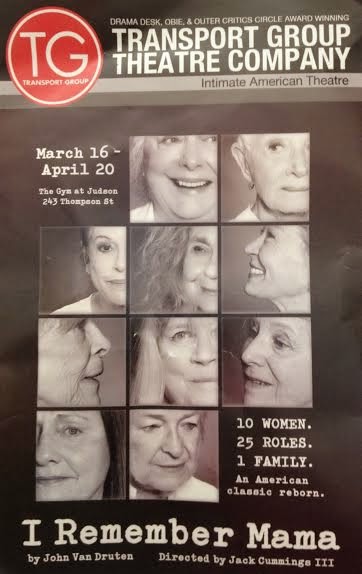 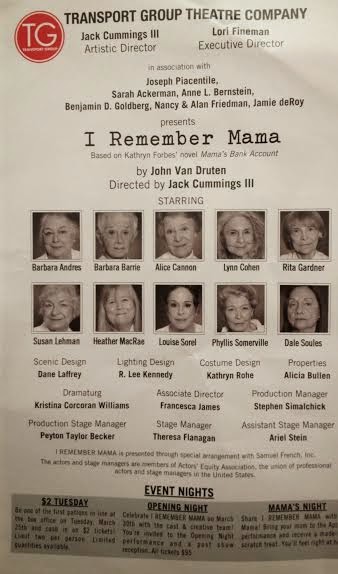 When I was growing up in the early 1950s, a time when family members watched the same shows together on the single TV set most families owned, one of everybody’s favorites was “Mama,” a weekly show that ran from 1949 to 1957 on CBS. The eponymous star was the great stage actress Peggy Wood, playing the Norwegian immigrant Marta Hansen, matriarch of a San Francisco family whose lives in San Francisco in the 1910s had been immortalized by the family’s eldest daughter, Katrin (known as Kathryn Forbes), in her best-selling fictionalized memoir, Mama’s Bank Account. This, in turn, became a Broadway hit (714 performances) in a 1944 adaptation by British dramatist John Van Druten, starring Mady Christians; the production was the first of many works produced by the composer and lyricist, Richard Rodgers and Oscar Hammerstein.  An excellent movie version arrived in 1948, starring the wonderful Irene Dunne. Marlon Brando made his Broadway debut as Marta’s 15-year-old, Nels, in Van Druten’s play. A 1979 musical version of the play, starring Liv Ullman, was a flop. 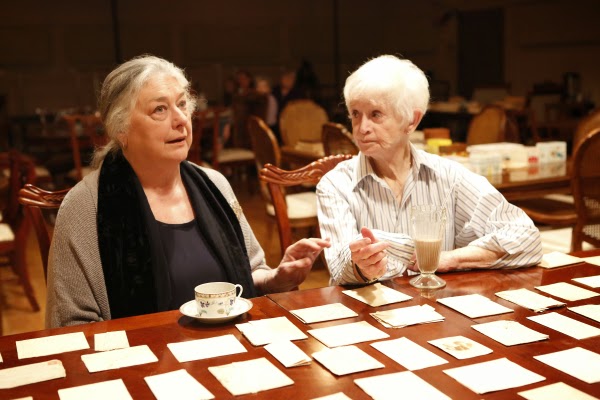 
Each episode of the TV series began with Katrin reciting the following words as she looked through a family album: “This old album makes me remember so many things in the past. San Francisco and the house on Steiner Street where I was born. It brings back memories of my cousins, aunts, and uncles; all the boys and girls I grew up with. And I remember my family as we were then. My brother Nels, my little sister Dagmar, and of course, Papa. But most of all when I look back to those days so long ago, most of all, I remember . . . Mama.” The show would then segue into that particular episode’s story. These words are a much shorter version of those that begin the play, where the next to last sentence is, “But first and foremost, I remember Mama,” followed by an expository line about recalling Mama counting out Papa’s money, from his earnings as a carpenter, at the kitchen table every Saturday night. Mama, as I described her in my Encyclopedia of the New York Stage: 1940-1950, is a “resourceful wife, cook, banker, housekeeper, friend, nurse, and guardian,” who keeps “everyone happy and secure in good times and bad.”


Even hearing the play’s altered words, read by the eternally delightful Barbara Barrie, gave me a nostalgic thrill when I visited the curiously wonderful revival of Van Druten’s highly episodic (30 scenes) old chestnut being presented in the expanse of the Judson Gym near NYU.  The audience sits in one or two rows around the edges of the room, facing a sea of ten dining room tables, each with its own artfully arranged props, books here, silverware there, glassware here, typewriters there, napkins here, curio boxes there. Seated at each table is a veteran actress, most of them with hair in shades of gray, silver, and white, but with a smattering of red and blonde mixed in. (There’ll be no snarky comments on the authenticity of those colors.)


Having heard that this production would be performed by 10 actresses, some of them more widely familiar than others but all well known to the theatre community, I thought that I was in for some sort of god-awful conceptual production in which a wiseass director was going to deconstruct and de-sentimentalize the play. But I was wrong. Jack Cummings III, artistic director of the Transport Group, which is responsible for this throat-lumping revival, has been absolutely faithful to Van Druten’s play, even though his cast of 10 plays all 25 roles in it (22 actors were in the original staging).


The dining room tables and chairs scattered about the room, each of them different, become a metaphor for family life, and are the only scenery provided, as the actors rise and enter the action as needed, or else sit and watch, patiently awaiting their next entrance or speech. While one table serves as the main family gathering place, others become neutral spaces associated with wherever the action happens to have moved—another room, a hospital, wherever. The actors occasionally move to other tables, but mainly remain where they were at the beginning. They wear contemporary casual clothing of sweaters, jeans, and slacks, although Barbara Andres, as Mama, wears a loose fitting, simple black dress with a gray sweater. For those actors playing multiple roles, a slight vocal or physical alteration is enough to suggest the essence of the character they’re playing, and there's never a moment when it’s not clear who is who—a process helped enormously, of course, by the narrative insertions of Katrin (Ms. Barrie), whose reminiscences are the basis of the play.


I can’t praise the ensemble nature of the performance highly enough; even thinking back on it days later, my eyes moisten and my heart thumps with affection for these grand dames whose accumulated stage years come to around 500, which is how old Noah was when he built the ark. In addition to Ms. Andres and Barrie, there are Alice Cannon in three roles, including Aunt Jenny; Lynn Cohen as both Mr. Hyde, the Hansen’s British boarder, a former actor who reads to the family nightly, and the cantankerous Uncle Chris; Rita Gardner, mainly as Aunt Trina, the spinster who finds a husband; Susan Lehman as Aunt Sigrid and two others; Heather MacRae as both Nels, Katrin’s brother, who wants to be a doctor, and Mr. Thorkelson; Phyllis Somerville, in three roles but mainly as Dagmar, the youngest daughter, who wants to be a veterinarian; Louise Sorel as Christine, the middle daughter, and F.D. Moorhead, the famous writer convinced by Mama to read something Katrin has written; and Dale Soules, as Papa, and two other male roles. I will not single anyone out because each is perfection itself, whether it be in the role of a boy, a girl, a doctor, a gossipy relative, a father, a lover, or a dying old man.


Mr. Cummings’s unusual production subverts our understanding of theatre by casting talented actresses, aged 67 to 82 (Ms. Barrie, if you must know), to play a gamut of characters only a few of whom come close to them in age, and many of them being male instead of female. Yet there is not a smidgen of overacting, or indicating, or any of the conventional techniques one might imagine most performers would resort to in order to embody characters so ostensibly different from themselves. The overall tone is remarkably restrained, natural, and honest. You will not hear a false note in the slightly two hours-plus production, although, because of the large space, you may have lean in to catch every word spoken around a table at the other end of the room. The concentration on what the characters are saying forces you to listen closely to the dialogue, and you ultimately hear this play even more than you see it; in fact, you even begin to forget the silver threads among the gold, as well as their modern clothes, and to see within them the characters they’re playing. This adds an immeasurably rich patina to their performances that breaks your heart by the contrast between the remembered youth of the actors (or those you may remember) and the current signs of their maturity.


For an idea of how the play was received in 1944, allow me to quote again from my encyclopedia entry:


It was widely appreciated that van Druten had respected the form of the original book. “His play is the theatre equivalent of a book of short stories, rather than the theatre equivalent of a novel,” approved Rosamond Gilder (Theatre Arts Monthly). . . . To Burton Rascoe (New York World Telegram), it was “breathtakingly beautiful. . . . It is not a great drama . . . but it is superb theatre.” “The evening provides the sheerest, tenderest joy of the new season,” exclaimed John Mason Brown (Saturday Review). But George Jean Nathan (Theatre Book of the Year) objected to the narrator device, which he found shopworn and unnecessary. . . . He was impressed, however, by the author-director’s simplicity and delicate restraint. “Episode after episode . . . is dramatically manipulated in its own artless terms and never once is there resort to an overemphasis which would play havoc with its simple internals.”


I feel much the same way as these reviewers, although Nathan’s remark about the narrator doesn’t convince me. The convention is still widely used, and has to be judged for its value in each instance. Otherwise, the play comes through with humor, pathos, love, and sweetness; it is rarely cloying, but always engrossing. The director’s concept strips away the period trappings to reveal the universality of the characters, and not so specific to a time and place that we might easily dismiss nostalgically as “the good old days.” Mr. Cummings’s staging of I REMEMBER MAMA pays tribute to the virtues of traditional family life and love in a way I will long remember, as will you if you’re wise enough to see it.
Posted by Samuel L. Leiter at 7:20 AM