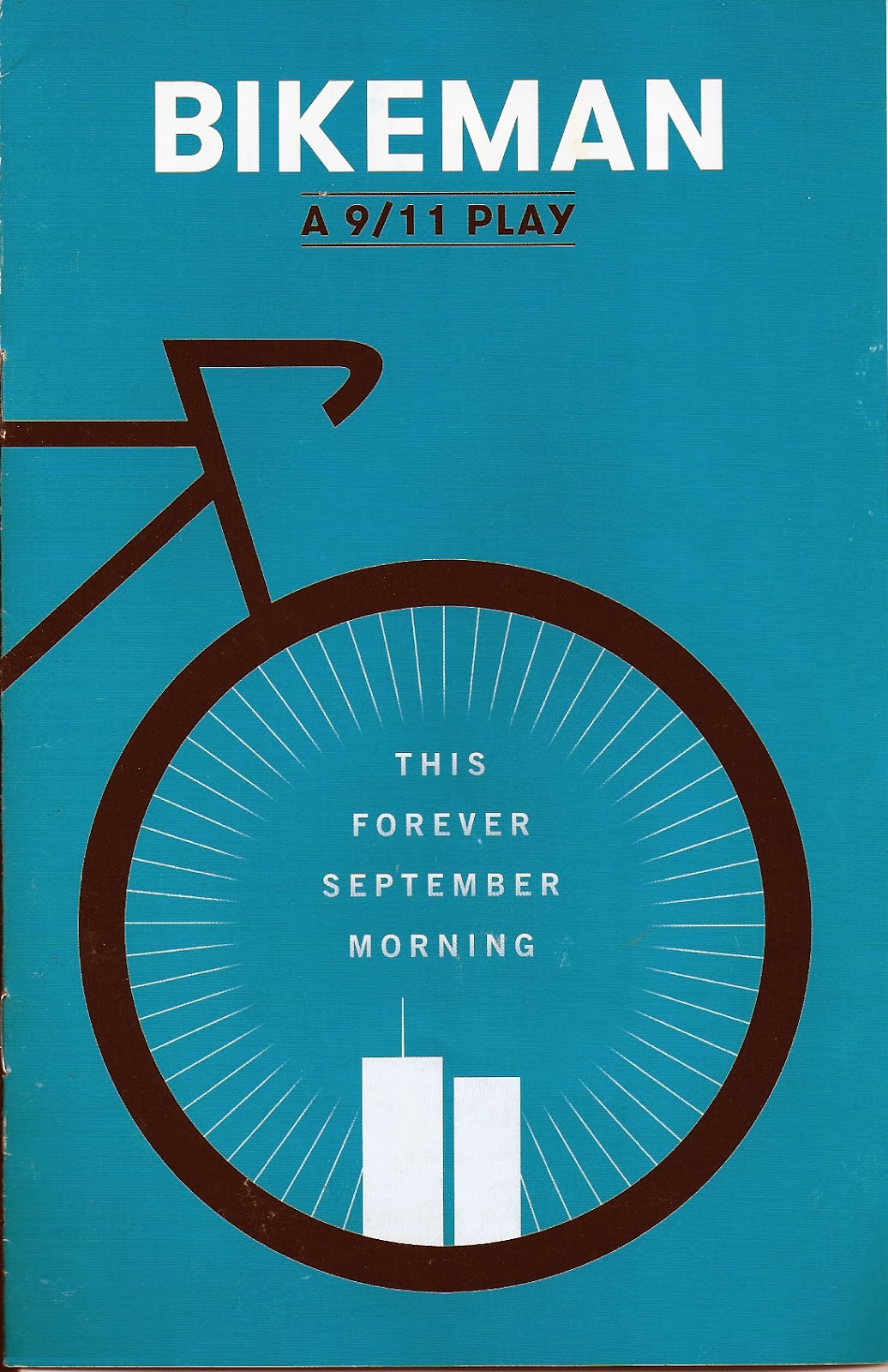 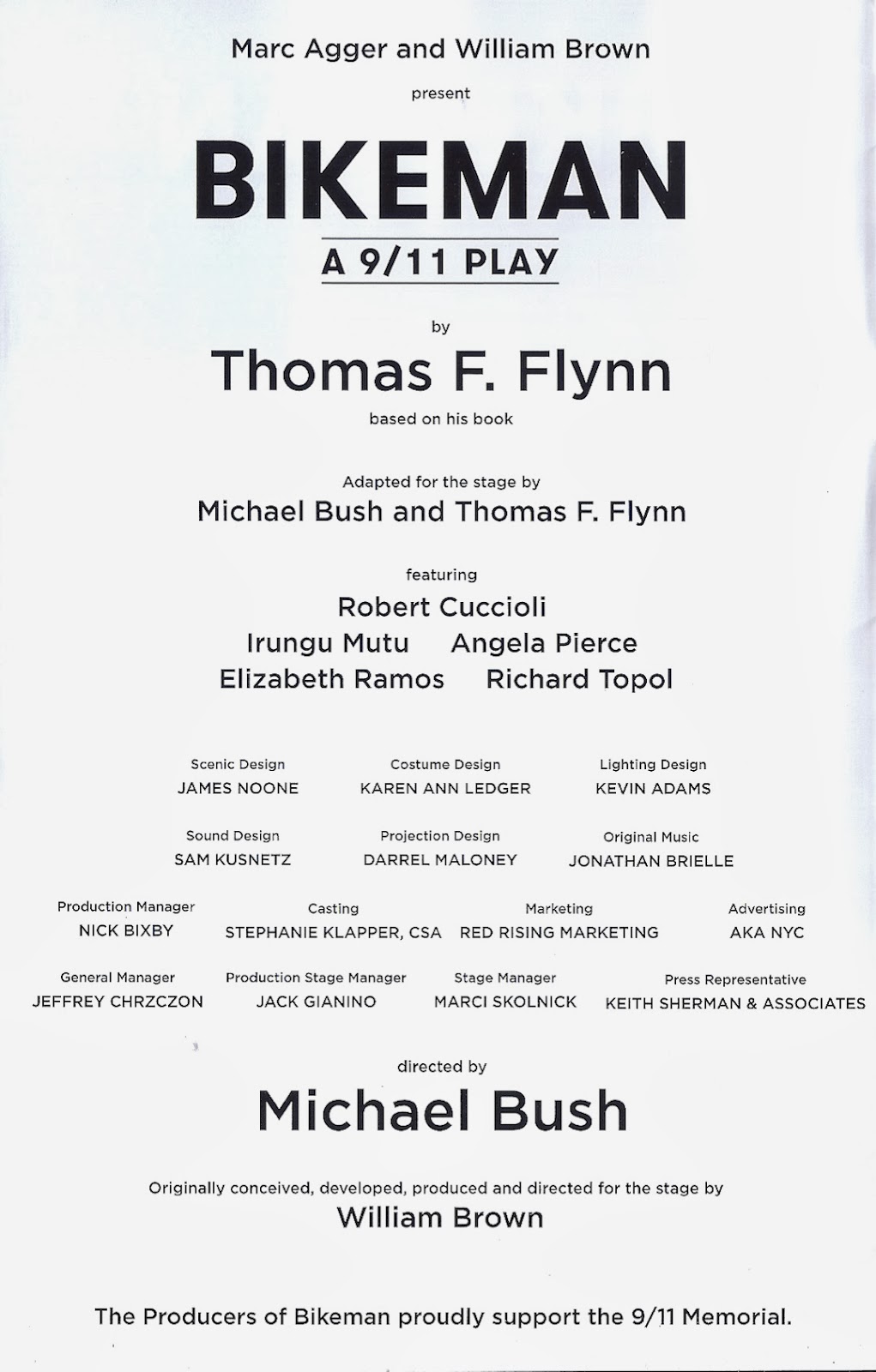 What happened to the Twin Towers and, by extension, to our country, on September 11, 2001, has insptired only a handful of plays so far; one of them, THE GUYS, about a firehouse victim's was even made into a movie, but none has truly been able to come to grips with the tragedy on a level commensurate with its immensity. The problem is, perhaps, insurmountable, and all that playwrights have been able to do is try to somehow deal with the event through the eyes and experiences of individual survivors or witnesses. Very little good has come of 9/11, and most people’s memories of it are clouded in anger and grief, so finding a way into the story that will be both moving and informative is a Sisyphean task. 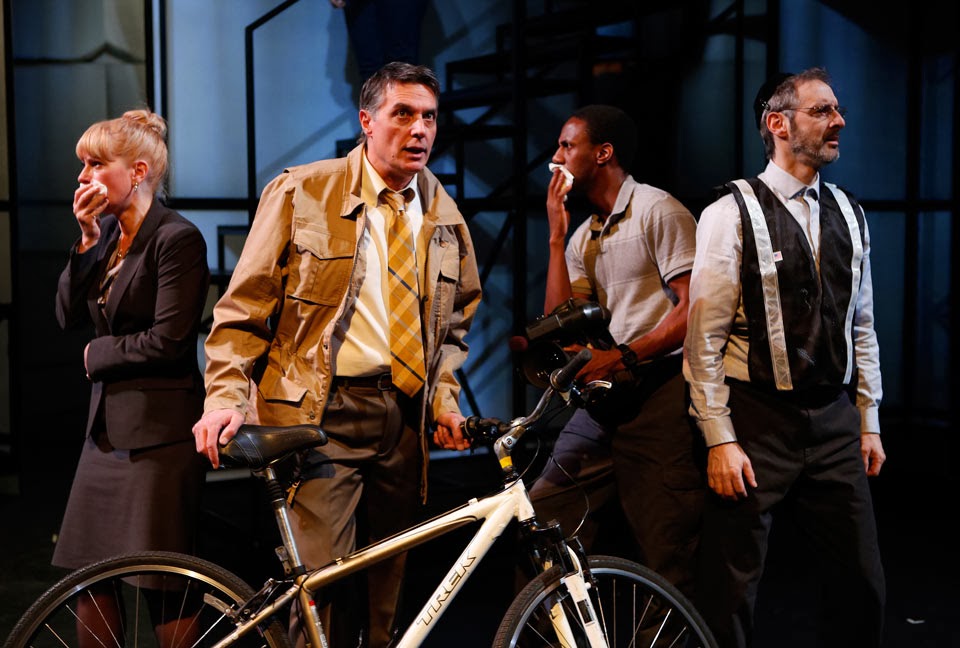 The most recent attempt to recover “that forever September morning” also takes a personal approach. This is BIKEMAN: A 9/11 PLAY, a brief piece written by TV journalist-producer Thomas B. Flynn, and adapted by Mr. Flynn and Michael Bush, who also directed it. BIKEMAN is running at the BMCC Tribeca Performing Arts Center, a brief walking distance from the site where those two hijacked airliners crashed into the World Trade Center. BIKEMAN is essentially Mr. Flynn’s poetic meditation on the event, which he experienced firsthand when he bicycled to the site in the wake of the first plane’s collision with the WTC. The stage seems mostly bare when you enter the theatre, the only scenic elements being 1) a huge, multi-paned window showing blue sky and wisps of clouds on a perfect day, and 2) a bicycle standing alone down left. The window will soon become a projection screen for stills and videos (including an introduction by Dan Rather) of the events, and will also break apart and be turned around on casters to show steep metal staircases for characters to run and up and down. (The manipulation of the staircases is a bit reminiscent, in fact, of the handling of a wooden staircase in the Broadway musical THE BRIDGES OF MADISON COUNTY.) Powerful sound effects by Sam Kusnetz, original music by Jonathan Brielle, and lighting by Kevin Adams greatly enhance those moments when chaos arrives.


The piece centers on the eyewitness report of Tom, played with dead-on seriousness by Broadway musical star Robert Cuccioli, who speaks most of his lines in a first-person, present-tense narrative style, reflecting in literary language the horrors he was experiencing as the first building came crashing down and bystanders were covered in ash and trapped in the parking garage amidst the rubble, waiting to die and, in Tom’s case, pondering the possibility of being found encased in dust in the manner of Pompeii’s victims. Four other actors, two men (Iringu Mutu as Photographer/ Policeman and Richard Topol as Ambulance Man) and two women (Elizabeth Ramos as Neighborhood Woman and Angela Pierce as Business Woman), represent both witnesses and survivors. There’s barely any pure dialogue, everyone speaking in the distanced tone Mr. Flynn has chosen; no matter how awful the circumstances, the play has an emotional coolness created by its lack of engagement among the characters, who seem more like images and metaphors than real people. Much of the movement is robotic, and the atmosphere eventually becomes soporific. Even at less than an hour, and as vivid are some of its images, BIKEMAN never pedals hard enough to raise our temperature, and we experience it more as an intellectual, elegiac artifact of the disaster than as a gut-wrenching, dramatic reflection of what happened.


One wonders, in fact, if we need our guts wrenched, when the mere reminder of 9/11 is still enough to make us shudder a dozen years later.
Posted by Samuel L. Leiter at 2:12 PM