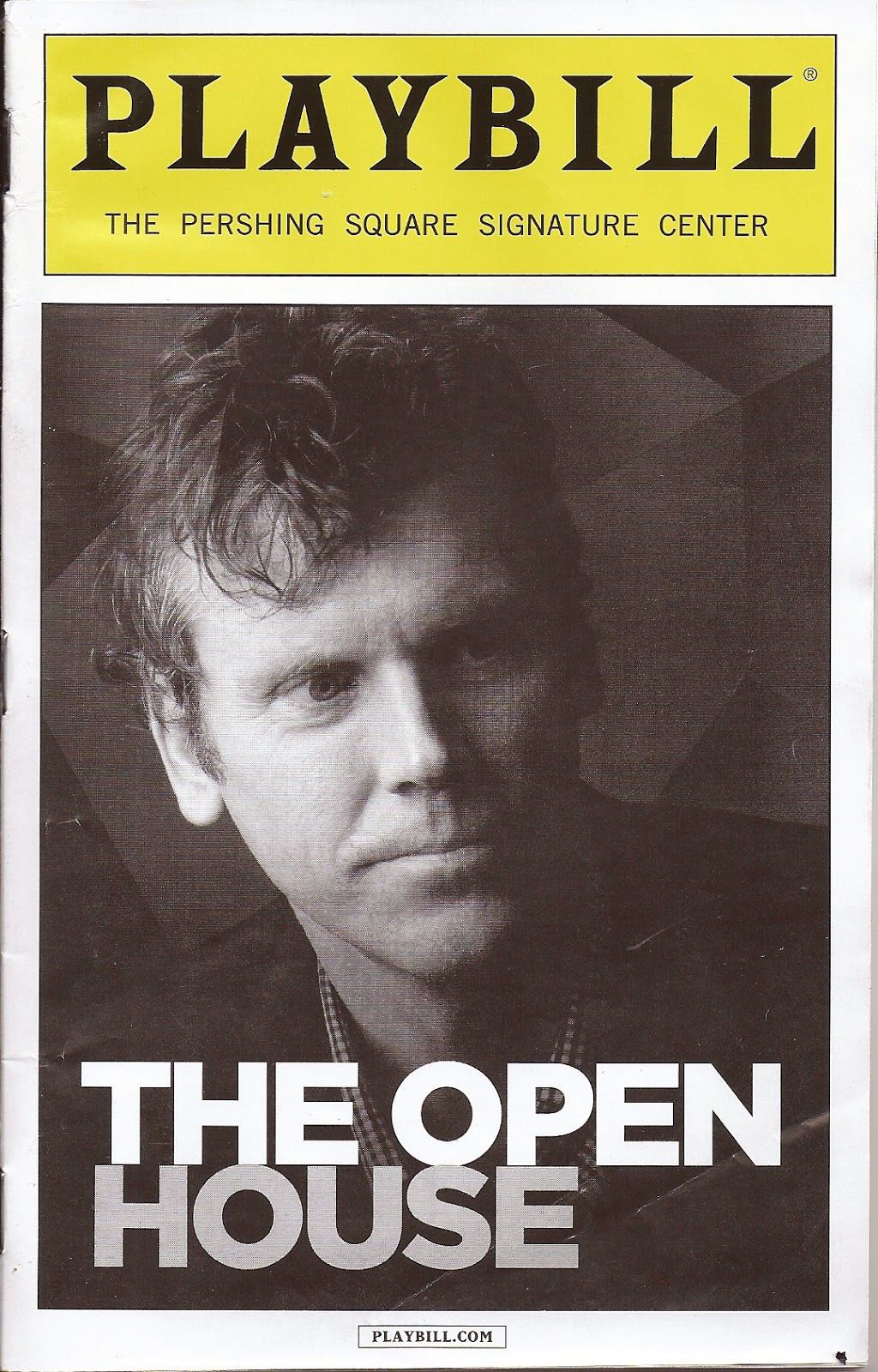 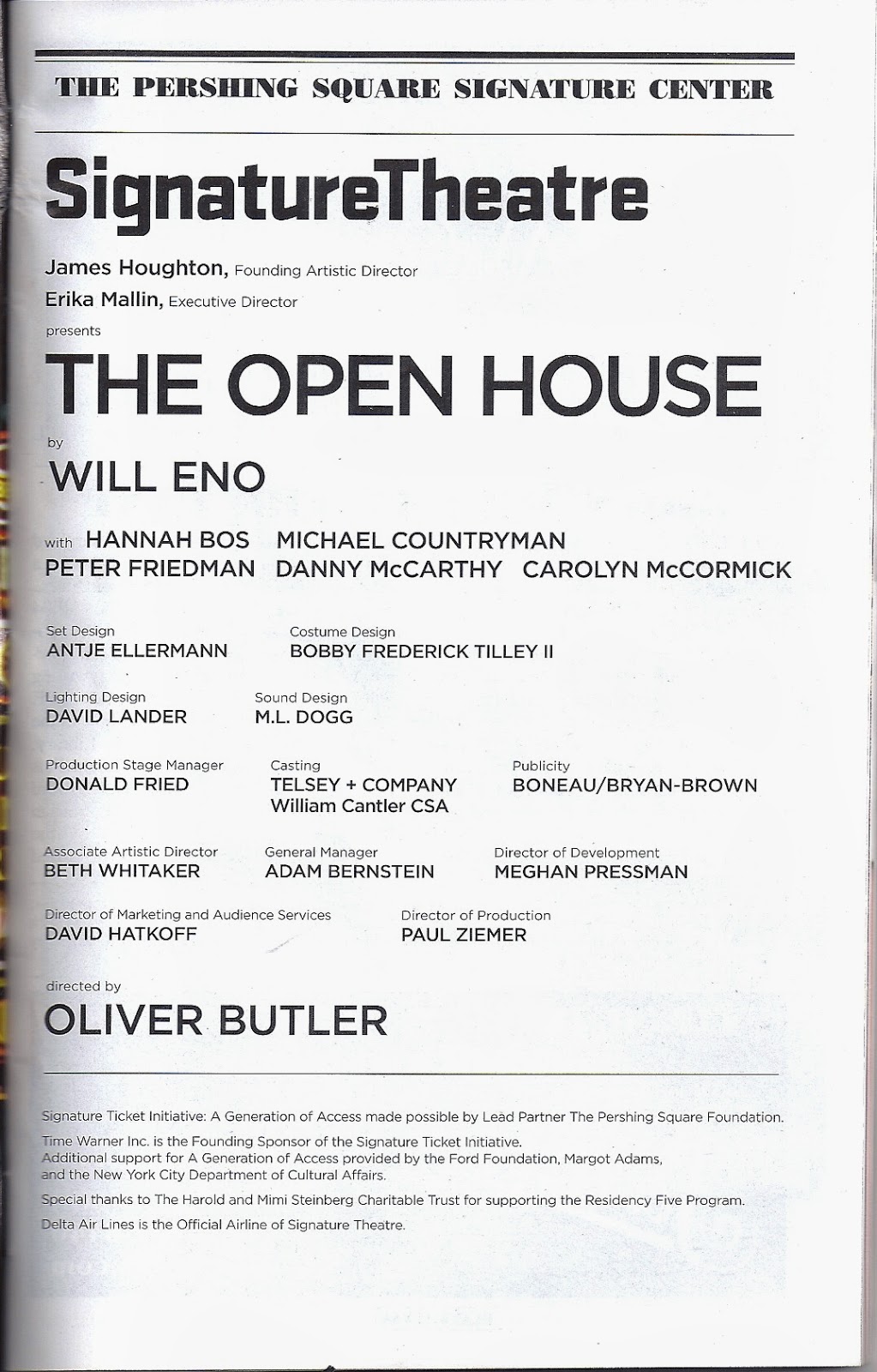 Will Eno’s THE OPEN HOUSE, at the Signature’s Linney Theatre, is a fascinating, funny, but decidedly offbeat family drama  set in the “family room” of a generic suburban house (nicely realized by Antje Ellermann), where we meet a father (Peter Friedman), sitting at stage right in a wheelchair, with a blanket over his knees, because of a recent stroke; his wife (Carolyn McCormick), seated on stage left in an easy chair, doing a small jigsaw puzzle; their grown children, (Danny McCarthy and Hannah Bos), placed on the couch separating their parents; and the father’s brother (Michael Countryman), standing upstage of the couch. (None of the characters in the play is given a name in the program.) They remain in these positions for a considerable time with little movement as they make small talk on the occasion of the parents’ anniversary. 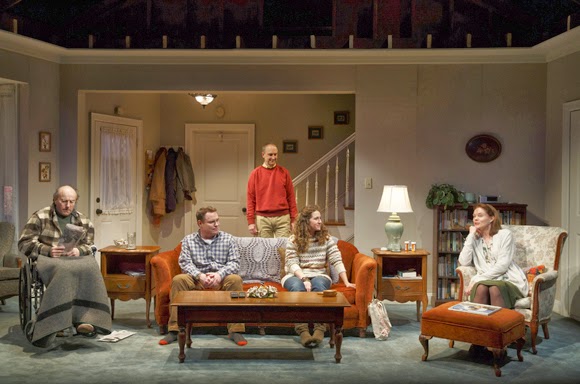 From left: Peter Friedman, Danny McCarthy, Michael Countryman, Hannah Bos, Carolyn McCormick. Photo: Joan Marcus.
The brother, who’s been in rehab, is a hapless sort, who has little to say and whose every remark is greeted with dryly cutting sarcasm by the father. In fact, nearly everything anyone says is followed with a snarky crack by this bitterly sardonic invalid, although no one loudly objects to or argues with his nastiness, taking it in stride, more or less, as if used to a lifetime as his verbal punching bags. The daughter wants to know why the family can’t be more like other families, but her attempt to ask even that question is deflated by the her father’s snotty reactions. The mother, too, is given to disconcertingly off kilter discourse, as when the daughter asks, “Does anyone want anything? Coffee or anything?” and the mother answers, “I should be offering you a cup of coffee,” although making no move to do so. When the daughter responds, “So is there some? . . . Is there any already made?” the mother replies, “Your father and I stopped drinking it.” Adding to the tone of dysfunctional familial alienation is the absence of the family dog, who has run away (as who wouldn’t in this atmosphere?). Still, for all their lack of communication, the family remains implacably stuck with one another, as if that’s a given of their existence, even if they’d prefer to be someplace else.


Gradually, each of the characters, except for the father, has to leave for one reason or another, beginning with the daughter going off to get lunch, followed by the mother’s exit when she learns that the daughter had an accident. Soon the house is visited by other characters, the first one being a real estate agent (Ms. Bos) there to prepare the house for sale. The father has secretly arranged for this to be the day of the open house. The agent goes about her business efficiently and with good cheer, taking barely any notice of his behavioral oddities, and before long the house is filled with other people of good cheer, all of them involved one way or the other in the sale or purchase of the house: a landscaper-house painter (Mr. McCarthy), a married couple (Mr. Countryman and Ms. McCormick) interested in buying the house, and, after the father, who has taken ill, departs by ambulance, a lawyer (Mr. Friedman). Each of these characters is played by the same actors who appeared in the play’s first half, but with quite different personal characteristics, which mildly disorients the father. They all get along nicely and, as they gather in the family room to talk about the house, they seem much more like a happy family than the suffering group we saw at first. As for the dog . . .


We see the original family’s presence vanishing as new people prepare to take over the house, possibly to bring happiness to a place that has been corroded by unexplained tensions. The characters are real, yet not real. They speak in everyday vernacular, but there's something wryly off about them, as if they live in some parallel universe. Everyone is recognizable but the very fact of their not being given names (or any other identifying labels) suggests their essentialness, as if we all know people like them but not quite as unresponsive or weird in how they respond. The second group of characters acts in more recognizably reactive ways than the first, but they too are so preoccupied with their immediate concerns that their behavior seems slightly disconnected from reality.


THE OPEN HOUSE is rife with witty, occasionally absurdist dialogue, spoken in conversational tones by the superb ensemble in a low-key, dry, and completely convincing manner, with Mr. Friedman’s irascible father being especially noteworthy. After seeing so much scenery chewing in recent productions, watching actors behaving rather than showing off was like applying salve to a sunburn. (Sadly, NO EXIT, a night later, scrubbed off all the ointment.) Under Oliver Butler’s perfectly calibrated direction, there's no shouting or playing to the rafters, and the subtle variations within each character are limned with honesty and quirky humor.


If it were any longer THE OPEN HOUSE would quickly wear out its welcome, but the 80-minute running time is just right for Mr. Eno to set up and develop his situations. In a sense, with its generic environment and characters, it’s like an extended sketch, but it maintains a strong enough sense of something happening to keep it from floating away. Mr. Eno's take on family life is a bit disconcerting, but it’s also oddly diverting. I’m glad I was able to walk in the door and check out his house.
Posted by Samuel L. Leiter at 8:15 PM