Henrik Ibsen’s 1879 play, A DOLL’S HOUSE, is an indispensable part of the modern repertoire, one of those classics that appears regularly in both noncommercial and commercial productions, and that makes periodic appearances in all the world’s leading theatres. It has been made into a number of motion pictures and, of course, it has had various distinguished TV productions. 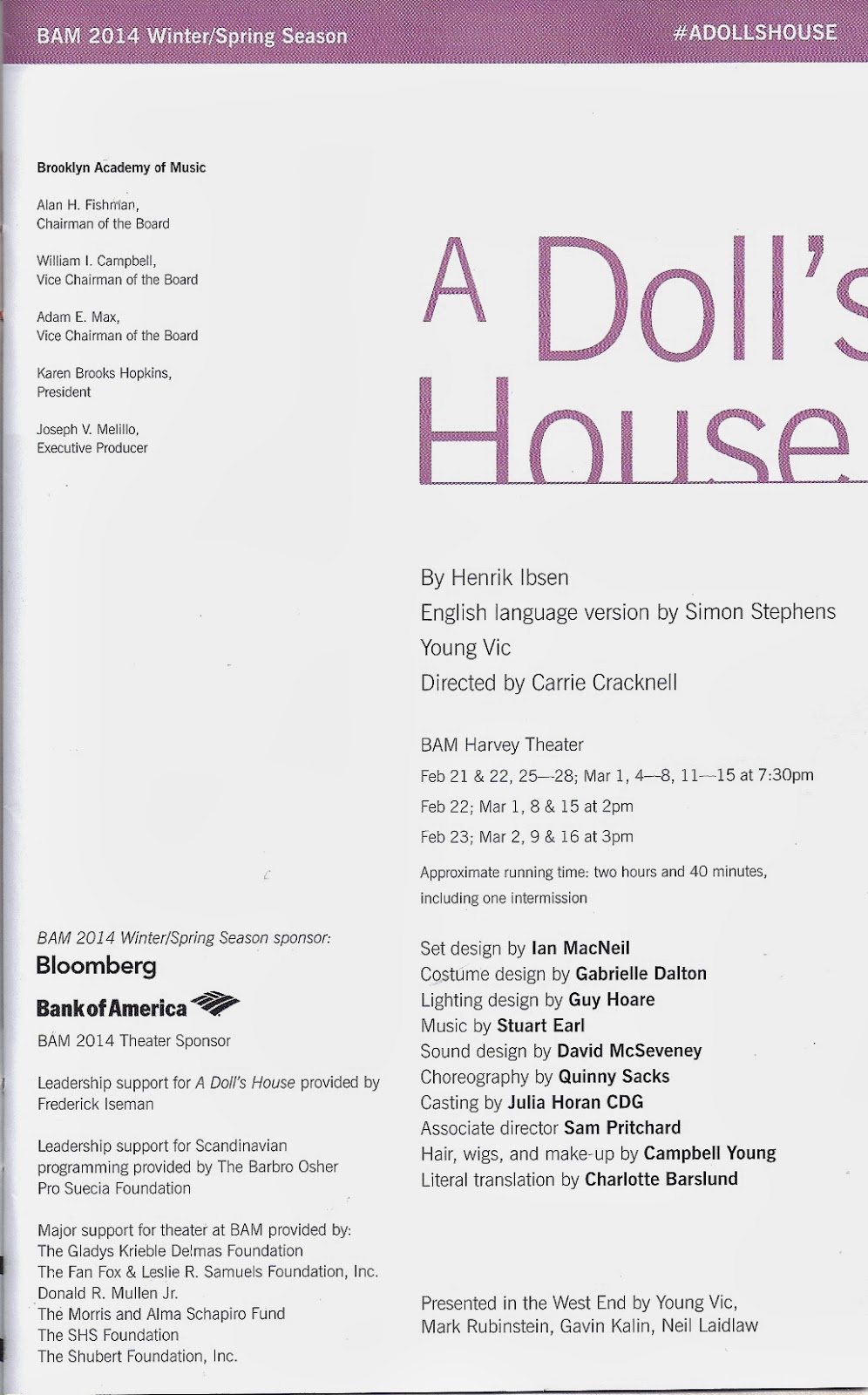 Its first American production was in Louisville, Kentucky, in 1883, starring the Polish actress Helena Modjeska as Nora Helmer, but it had to wait until 1889 before it was seen in New York. The 20th century saw leading actresses such as Minnie Maddern Fiske, Alla Nazimova, Ruth Gordon, Claire Bloom, Liv Ullman, and Janet McTeer play Nora on Broadway, the last in 1997. In nearly every case, the reviews have been mainly positive, sometimes ecstatic, especially for the star. Ms. McTeer even won a Tony for her performance. These actresses were already stars when they tackled Nora, but Hattie Morahan, performing the role in the imported production from London’s Young Vic now at the Brooklyn Academy of Music’s Harvey Theatre, has gained such acclaim that she is being propelled from the ranks of the relatively unknown into the realm of stardom.


Ibsen’s play, about a doll-wife, that is, a woman who seems to flourish in a household in which her husband appreciates her more like a toy or a pet than a full partner in their marital relationship, was, of course, once highly controversial. Nora makes a crucial, but secret, decision to forge her father’s signature in order to raise funds to save the life of her ailing husband, Torvald (Dominic Rowan). When Torvald discovers what she’s done, he’s furious, claiming she’s an unfit wife and mother. Seeing how shallow his respect for her is, she decides to leave him and their children in order to discover the self that she has been unable to express while living under such oppressive conditions. Realizing what he has wrought, Torvald desperately pleads for forgiveness, but Nora will not listen. Given the patriarchal attitudes toward marriage prevalent when the play was new, the door slamming behind Nora when she walked out of the house at the end is said to have been heard round the world.

The stir it created by challenging conventional marriage relationships was international in scope. Even now, one feels the chill of Nora's decision, feminist or not. We still wonder how a woman can walk out on her husband and children for reasons that have nothing to do with the usual reasons, such as infidelity or physical abuse. (Even when the children remain with the woman, we may view her decision to abandon her spouse a betrayal of the kids.) Ultimately, A DOLL’S HOUSE came to be considered a flag bearer in the fight for female empowerment, despite Ibsen's own denial of any such intention. 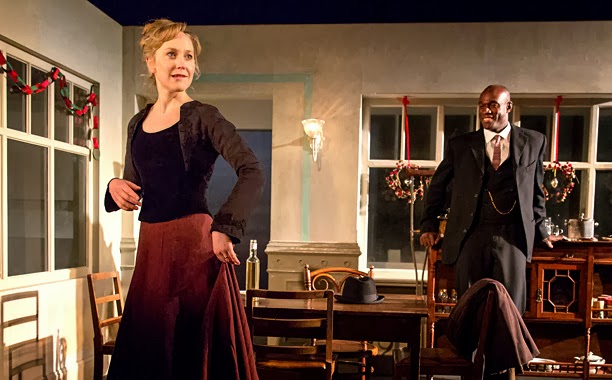 Hattie Morahan, Steve Toussaint. Photo: Richard Termine.
Ms. Morahan meets all the demands of her complex role, playing the doll-wife with studied childishness because Nora knows that’s what’s expected of her, but revealing with subtle hints of behavior and line readings that she’s far more self-aware than anyone gives her credit for. She leaves enough seeds behind in the early scenes of the person into whom she’ll evolve for her transformation not to come as a surprise, and when she finally confronts Torvald’s narrowness and lack of understanding, her passion is potent and explosive.


But this is not only Nora’s play. It’s a well-crafted, if wordy, drama with multiple characters filling out the Helmer household. Each of the chief characters, from Mr. Rowan’s Torvald to Nick Fletcher’s Krogstad, Caroline Martin’s Mrs. Linde, and Steve Toussaint’s Dr. Rank, is beautifully etched, with superb direction by Carrie Cracknell that keeps you riveted to the plot’s convolutions and to its increasing suspense. Simon Stephens new English-language rendering sounds natural and contemporary.


Still, there’s nothing in the uniformly excellent performances that’s uniquely revelatory. It’s a remarkably well done revival of a play that has had many similarly remarkably well done revivals. Then again, its scenic concept is special enough to make it memorable. The Helmers’ home has been designed by Ian MacNeil with multiple rooms to imply the doll house environment in which Nora is ensconced. Like the current revival of MACHINAL, the set frequently revolves, although here all the scenes are part of the same milieu, and one can see the life of the house going on as the turntable turns, especially if you’re seated a bit further back from the stage in the steeply raked Harvey. The activities of the serving girl, the children, and whoever else is moving from place to place or occupied with business in their own room, like Helmer in his office, are clearly visible, an effect enhanced by windows set into rooms on either side of a hallway that runs down the middle of the house. The architecture is spare and unfussy, not at all like the overstuffed Victorian aura of many other revivals.  With Guy Hoare’s lovely lighting making each room discrete, the exceptional background music of Stuart Earl, and the attractive period costumes of Gabrielle Dalton, this Young Vic production has gathered all the right decorative ingredients into a splendid visual and aural ensemble that matches that of the acting company.


With so many top notch revivals of A DOLL’S HOUSE already in the history books, each new one can only hope to be as good as the last. No one can truly say which is best, but, to all intents and purposes, this one is surely as good as any that came before. And it has the added fillip of transforming Hattie Morahan into a budding star.
Posted by Samuel L. Leiter at 7:29 AM