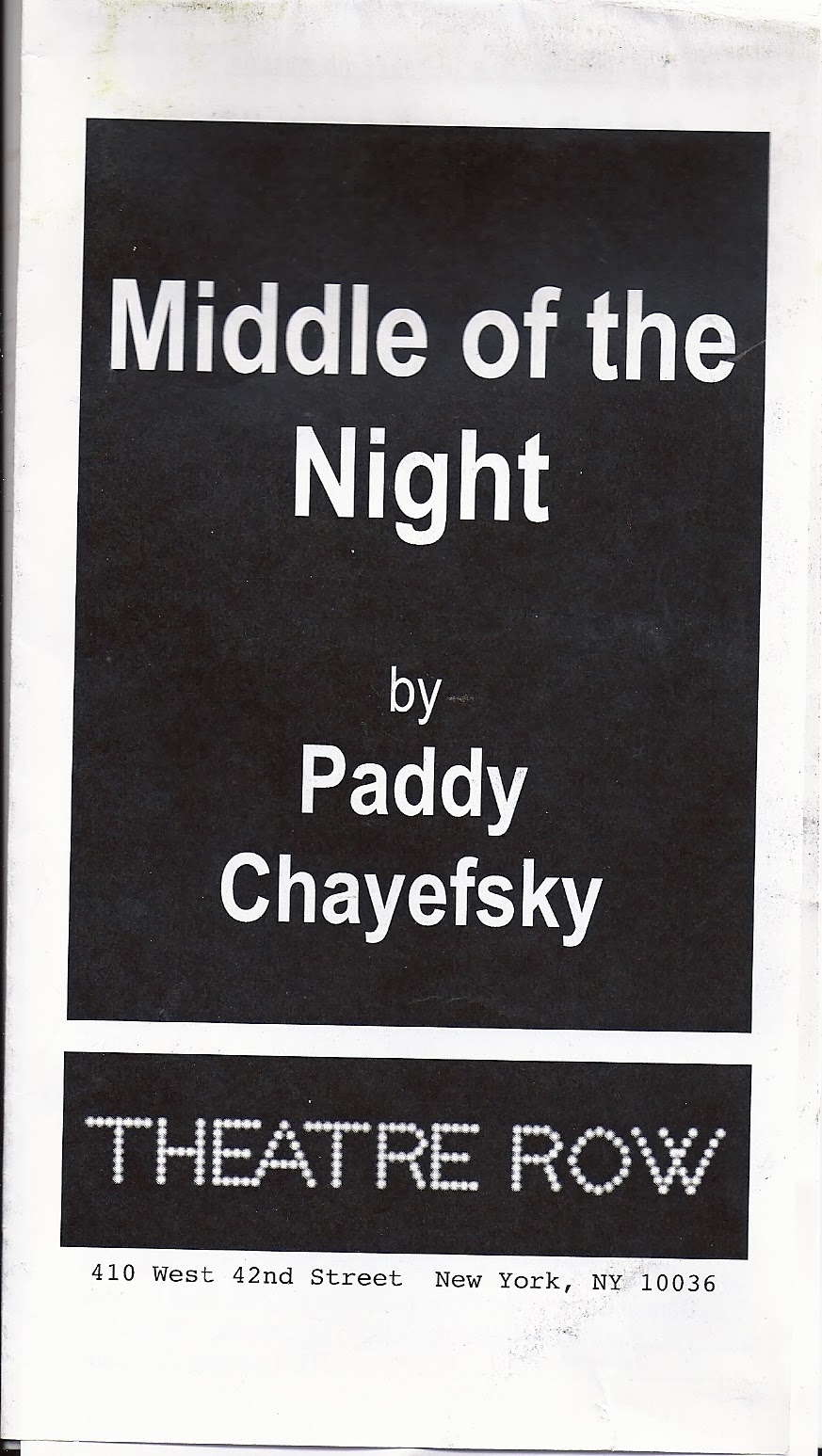 Paddy Chayefsky’s MIDDLE OF THE NIGHT, which debuted on Broadway in 1956, originally starred Edward G. Robinson as Jerry Kingsley, a successful, Jewish, 53-year-old garment manufacturer who, after his wife dies, finds a new lease on life when he falls in love with Betty, a pretty, 24-year-old, Gentile woman who works in his office. Her husband has alienated her, and Jerry represents the warmth and understanding no one else seems able to provide. The families are upset, of course, each trying to talk its relative out of the arrangement, but nothing can stop Jerry and Betty from fulfilling their respective destinies. 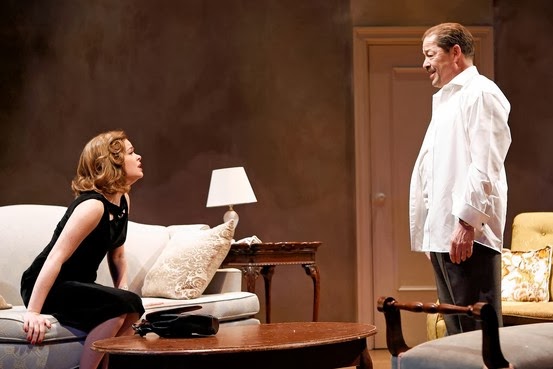 Betty was first played by the great Gena Rowlands. Robinson was 63 at the time, and Rowlands was 26, so it may have been necessary for Chayefsky to take 10 years off Jerry’s age to make the disparity less controversial. The movie version of 1959 starred Fredric March, who was 62, and Kim Novak, 23. The Keen Company’s revival, the play’s first in New York since its original production, stars Jonathan Hadary, 65, and Nicole Lowrance, whose age I don’t know, although an Internet article places her in high school in 1997, which would put her somewhere in her 30s. I note this because the play is about the fuss everybody in the play makes over the May-December romance. Ms. Lowrance can easily pass for someone in her mid-20s, but Mr. Hadary looks every wrinkle his age, just as did Mr. March, according to Bosley Crowther’s New York Times review of the movie. Mr. Robinson’s performance, on the other hand, was so good that not much was made of his actual age when he created the role.


A friend of mine suggests that in today’s world, an actor in his early 50s, like Tom Cruise, is likely to look 10 years younger, so it may be necessary to cast an older actor to make the age difference more visibly striking. Be that as it may, Mr. Hadary, one of New York’s busiest and most respected character actors, lacks the special charisma that would allow an Edward G. Robinson or a Fredric March to succeed in this role. His bearing, nasal delivery, and other physical characteristics make it hard to buy Betty’s falling in love with him, and, despite one or two effective scenes, he’s rarely convincing. When he must hold a baby (played, of course, by a doll), it appears to weigh practically nothing, and he even engages in a shouting match while holding it (admittedly, director Jonathan Silverstein can be faulted for this).


Even if the role were better cast, however, it would be difficult to appreciate this misconceived production. From the minute the lights go up there’s an air of phoniness to Mr. Silverstein’s over-obvious attempt to replicate the aura of ordinary middle-class people in mid-1950s Manhattan.  None of the actors is able to truthfully embody their roles, although Denise Lute as Evelyn, Jerry’s sister, who may be objecting to Jerry’s affair because it means her possible replacement in the household, is one who gradually improves as the play proceeds.


For what must be budgetary reasons, the set, by Steven C. Kemp, remains the same for both the upper West Side apartment of the prosperous Jerry and his family, and for the lower middle-class family of Betty. No attempt is made, other than the use of a chandelier for Jerry’s apartment, to differentiate one space from the other, despite the importance for the audience of understanding how unalike are the circumstances in which each family lives. Moreover, among other strange ideas, the upstage door in Jerry’s apartment leads directly to the street, where—with the help of a wall made of scrim that allows us to see through it—mounds of extremely artificial snow are heaped.


Making the production even more confusing is the casting of a number of actors in double roles. While several are able to make clear enough distinctions between one role and the other, there are those, like Amelia Campbell and Melissa Miller, who look so much alike in each of their characters that seeing them in both apartments is a jolt. Chayefsky was a naturalistic playwright. You have to believe in the reality of his world, made palpable by environment and individual personalities. Distractions created by scenic and casting choices are bound to drive a plausibility wedge between audience and performance that make watching the play mentally akin to sitting on a burr.


Almost as exasperating are some of the other choices. The play takes place in the dead of winter (the presence of all that fake snow on stage is not a welcome sight) but when characters dress to go out into the bitter cold they put on light spring jackets; Betty wears one of bolero length. At the end of the play, Jerry walks through his door into the freezing street wearing only a wool cardigan, without so much as a scarf or gloves. And what man didn’t wear a hat outside in a 1956 winter? Couldn’t costume designer Jennifer Paar have found period winter clothing that was more acceptable?


MIDDLE OF THE NIGHT is still worthy of production. Its dialogue sounds true to the characters, and Chayefsky gives us several richly drawn characters who embody values associated with the period. However, if a company is too strapped to provide this play with the kind of design and casting values it requires, it would simply be better to choose something else. Chintziness has its place, but MIDDLE OF THE NIGHT doesn’t deserve it.
Posted by Samuel L. Leiter at 9:10 PM