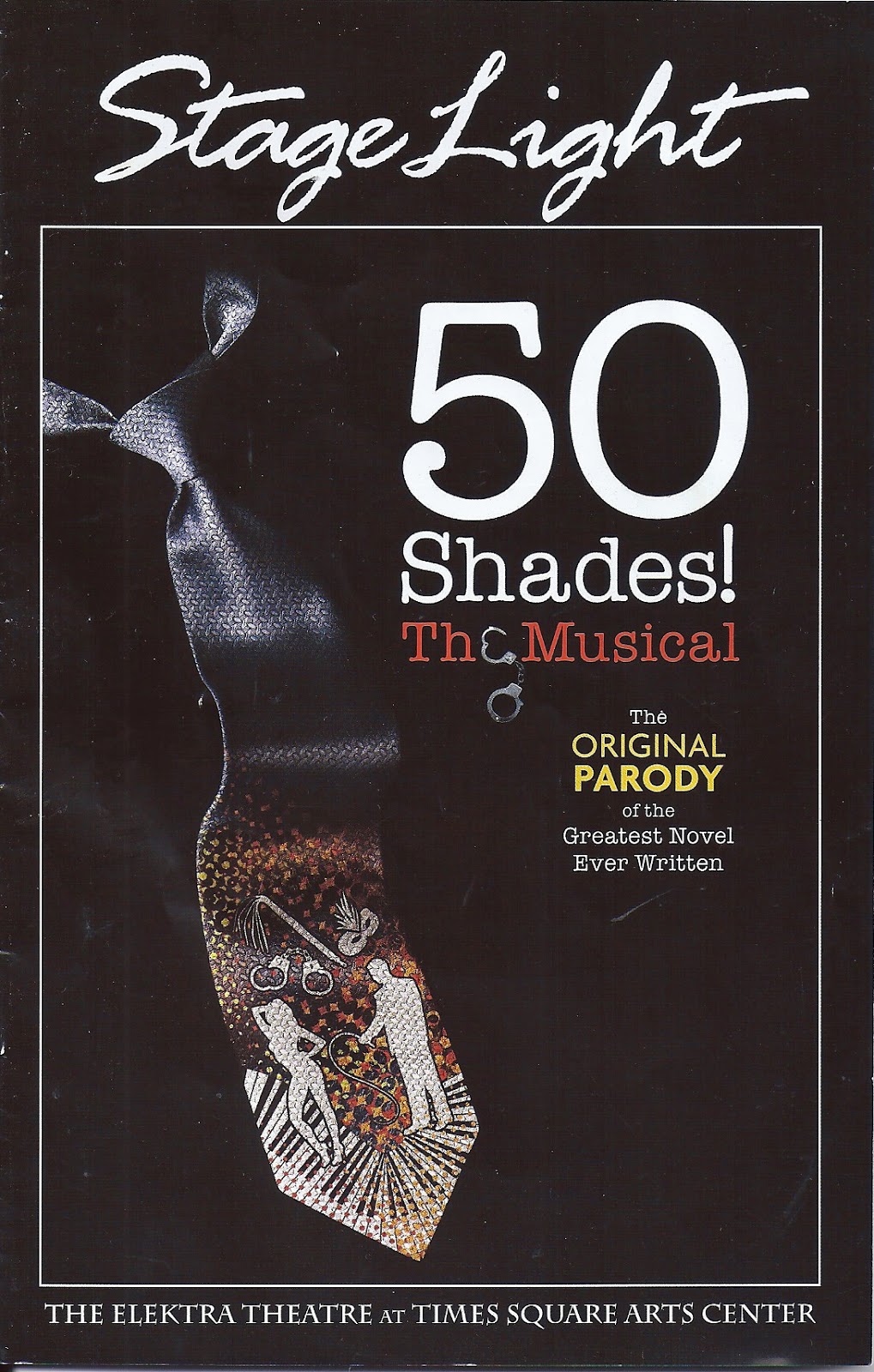 This is the second musical parody this season of E.L. James’s blockbuster, potty-mouthed bestseller, FIFTY SHADES OF GREY. The last arrived as last June’s CUFF ME: THE FIFTY SHADES OF GREY MUSICAL PARODY, and you can read how bad I thought it was by clicking on this link: http://slleiter.blogspot.com/2013/06/42-review-of-cuff-me-fifty-shades-of.html. In that similarly off-color show, the premise is that three women in a beauty parlor begin talking about the book and the show then morphs into a broadly farcical musical reenactment of the story. 50 SHADES! THE MUSICAL has been assembled by a rather large team, with music and lyrics by Al Samuels, Amanda B. Davis, Dan Wessels, Jody Shelton, and Ashley Ward, and a book by the same group, except that instead of Dan Wessels we have Emily Dorezas. In place of the women in the beauty parlor, they’ve given us three book club members (Kaitlyn Frotton, Chloe Williamson, and Ashley Ward) reading the book, a framework that inspires a similar reenactment, with the women getting their rocks off from their literary encounter. (The New York company, by the way, which is doing the show at the Elektra Theatre on W. 43rd Street, is different from the one that has been successfully touring the country since last year.) 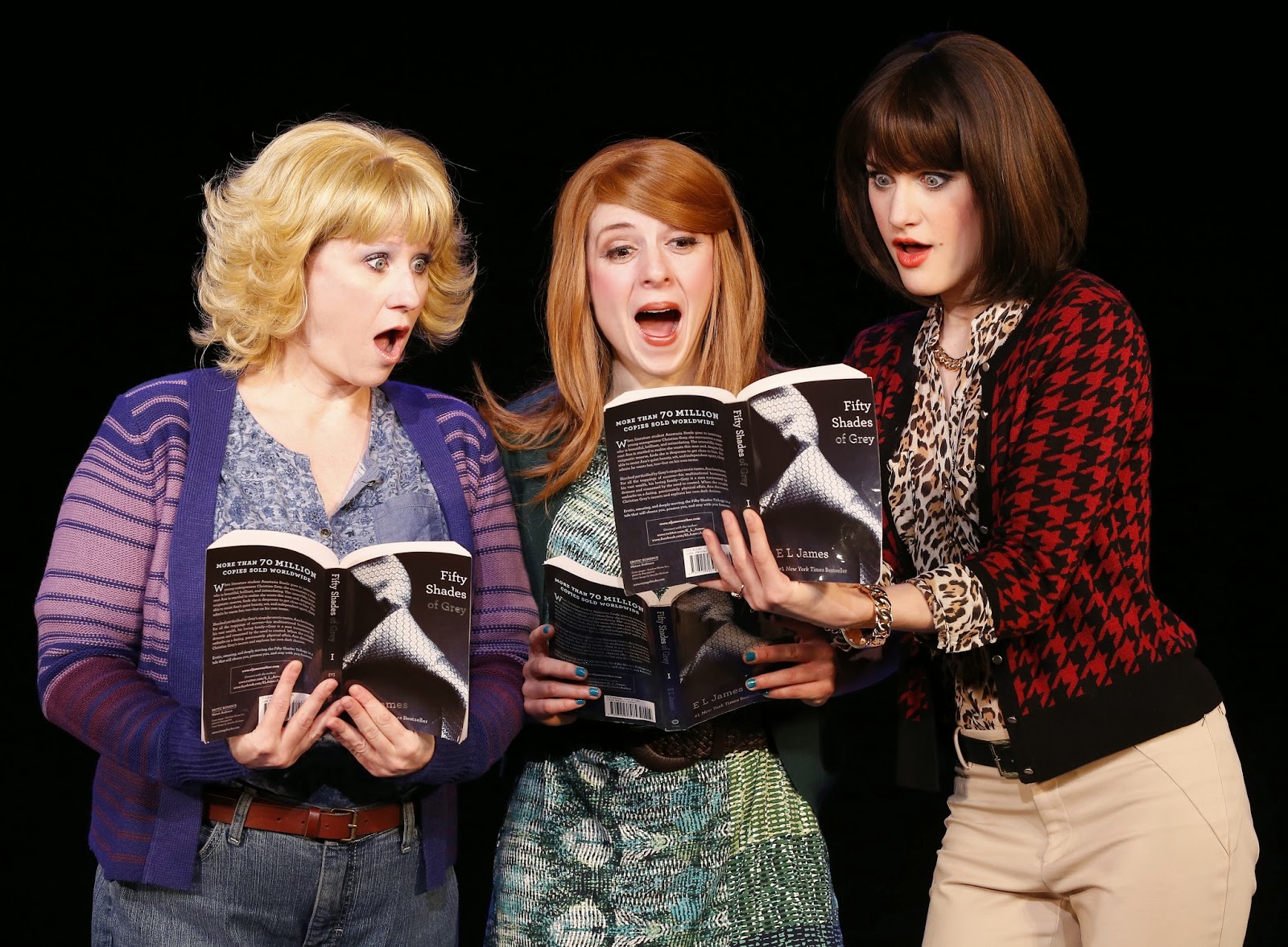 
James’s novel, of course, is famous for its chic-porn tale of Anastasia Steele, a virgin whose cherry is popped by a thrillingly handsome, kinkily sexual billionaire named Christian Grey, who wants her to sign a contract allowing him to do, do, do to her what he does, does, does. What gives this new takeoff its initial zest and sharply differentiates it from CUFF ME is that Christian is played by a fat (there’s no kinder word) and comical-looking Asian-American actor (Chris Grace) while Ana is portrayed by an actress (Amber Petty) who, while far from being as oversized as her sex partner, is nonetheless on the plus-size of svelte. (I'm describing the New York casting, of course, but Christian is played by a potbellied actor, although not an Asian-American one, on the national tour as well.) Mr. Grace seems perfectly at ease with comical  physicality, and, by playing his part straight only makes his presence funnier. When he shows up to work out in a one-piece spandex gym suit with a spaghetti-strap tank top cut so that his huge belly protrudes, with him behaving as if he had Matthew McConaughey's six-pack, the joint rocks with laughter at the incongruity. For those in need of eye candy, though, the show features two truly ripped performers, Adam Hyndman and Alec Varcas, who play, respectively, Christian’s valet, Taylor, and Christian’s brother, Elliot; both lark about like male strippers, while the display of feminine pulchritude is the well-represented responsibility of the superhot Casey Rogers, who plays the Inner Goddess. 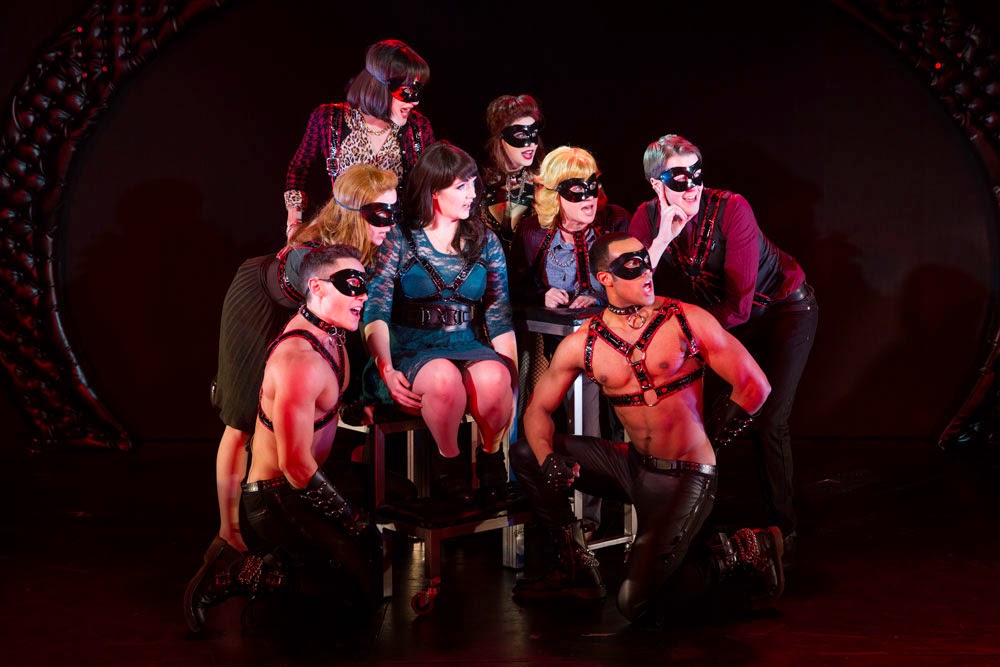 
Aside from this surprising twist in the way the book’s two chief sexpots look, the show is as outrageously profane as the book, and the lyrics and stage business are filthy, filthy, filthy, which is just what the raucously responsive audience is there for. They laugh until they wet themselves, for example, when Christian, the rotund romancer, rocks the song “I Don’t Make Love: I Fuck,” and points directly at woman after woman in the audience as he does so, while each of said women squeals with delight at being picked out for his attention. He even playfully threatens a woman by pointing at her and saying, “I’ll fuck you right in front of this dude.” ROAR OF LAUGHTER!


Ana, not to be outdone, has her big numbers, too, as when she sings that “There’s a hole inside me, that I need to fill.” The lyrics, of course, attempt every variation on double entendre in the book, and then some. And some are simply what they are. I think one goes, “Would you like a margarita? Show me your tita.”


The set by John Dunnett, who also did the costumes, is functional, being little more than set pieces brought on in front of a black background with an oval shaped archway. There’s not much of interest in the staging by Al Samuels and Rob Lindley apart, perhaps, from a scene in a helicopter where an actor holds a helicopter aloft, dangling from a pole, while Christian and Ana sit on a platform as if they’re in it. Another big moment arrives with a giant orgasm expressed via an explosion of silver streamers over the audience, not unlike a similar effect, using confetti, in SEX TIPS FOR STRAIGHT WOMEN BY A GAY MAN.


The music, unlike that in CUFF ME, is original, but it’s mostly pastiche in a variety of styles, from R&B to Latin to Gospel, and none of it will stay with you when you leave. However, if you’re a fan of the book, as so many on the distaff side were the night I went, the jokes at the book’s expense will probably linger. For me, when I remember the show (and I may) it will be for the sight of a raunchy, paunchy Christian Grey, slyly covering one nipple with a strap of his tank top, as if to say, there’s more where that came from.
Posted by Samuel L. Leiter at 6:09 PM