242. THE MEGILE OF ITZIK MANGER 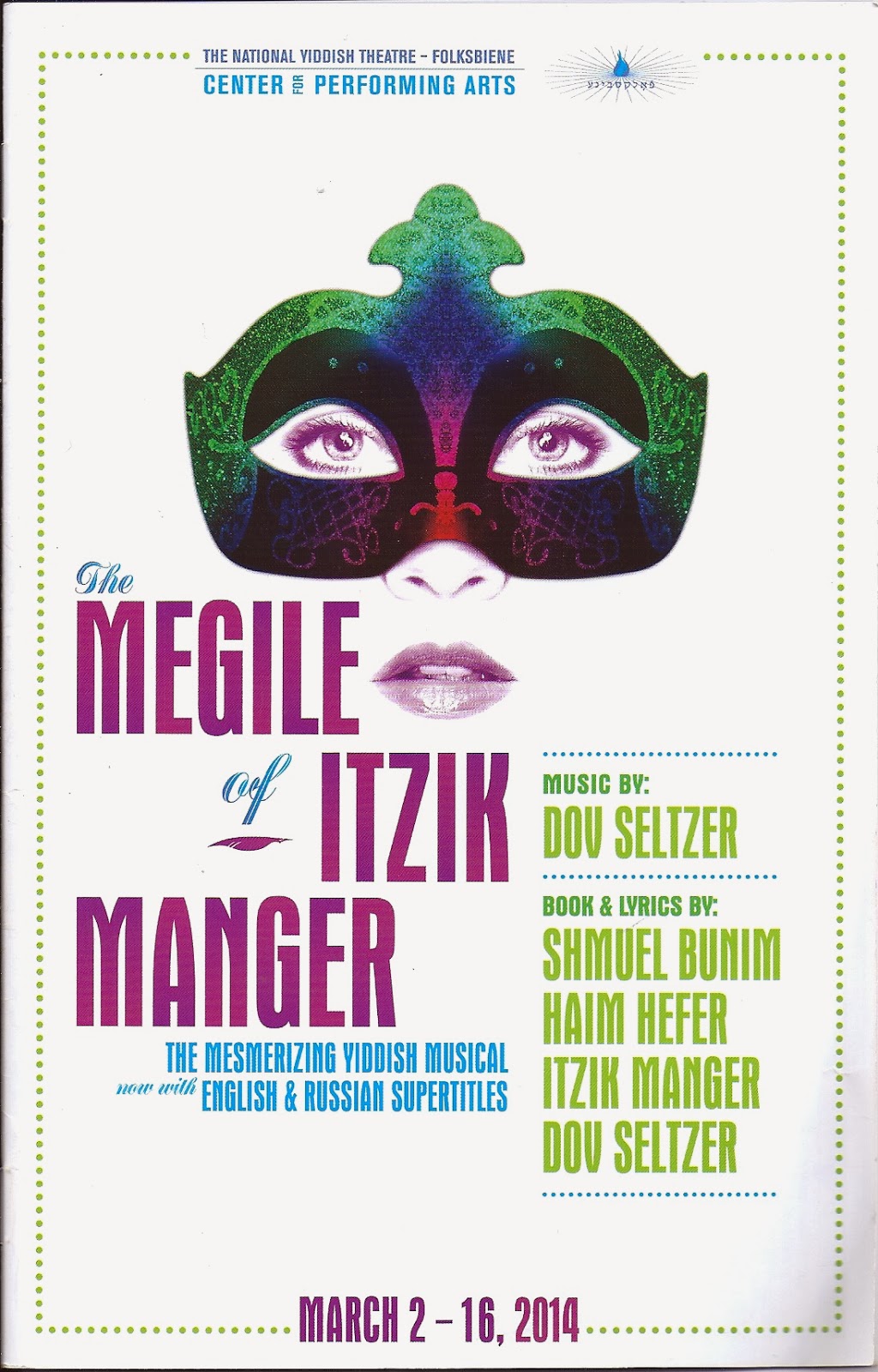 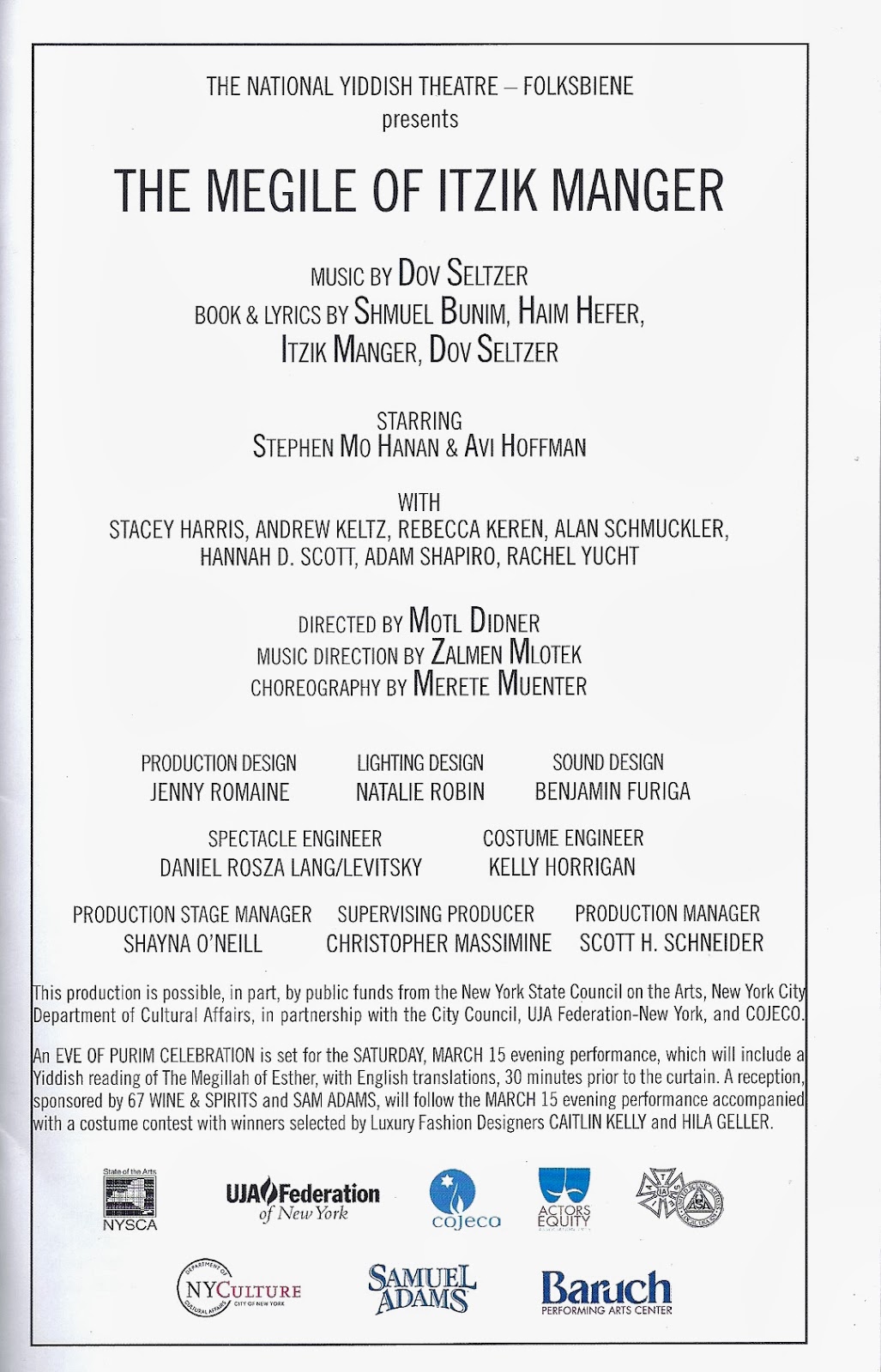 This musical comedy version of the Jewish Purim Play (Purimspiel), energetically directed by Motl Didner, is not about someone named Itzik Manger; Manger (1901-1969) was an Eastern European poet-playwright who wrote a modernized version of the Purim scroll called the megillah read in synagogues at Purim; it is generally considered a synonym for the Old Testament’s Book of Esther. Manger’s poetic version was transformed by Shmuel Bunim into a sprightly, highly theatricalized version of the Purim Play.

The name Itzik Manger is not very well known among non-specialists in Yiddish literature, so when someone at a meeting suggested I order tickets to the show, I did so using the name the person gave me. Thus I requested tickets to THE MEGILE OF ITZIK MENGELE, losing the irony that Mengele was the name of the evil Nazi doctor who carried out so many horrible experiments on concentration camp inmates. Oy veyz mir. On the other hand, the story has its own Mengele in the person of the wicked, anti-Semitic villain Haman (or Homen, as it’s spelled here). 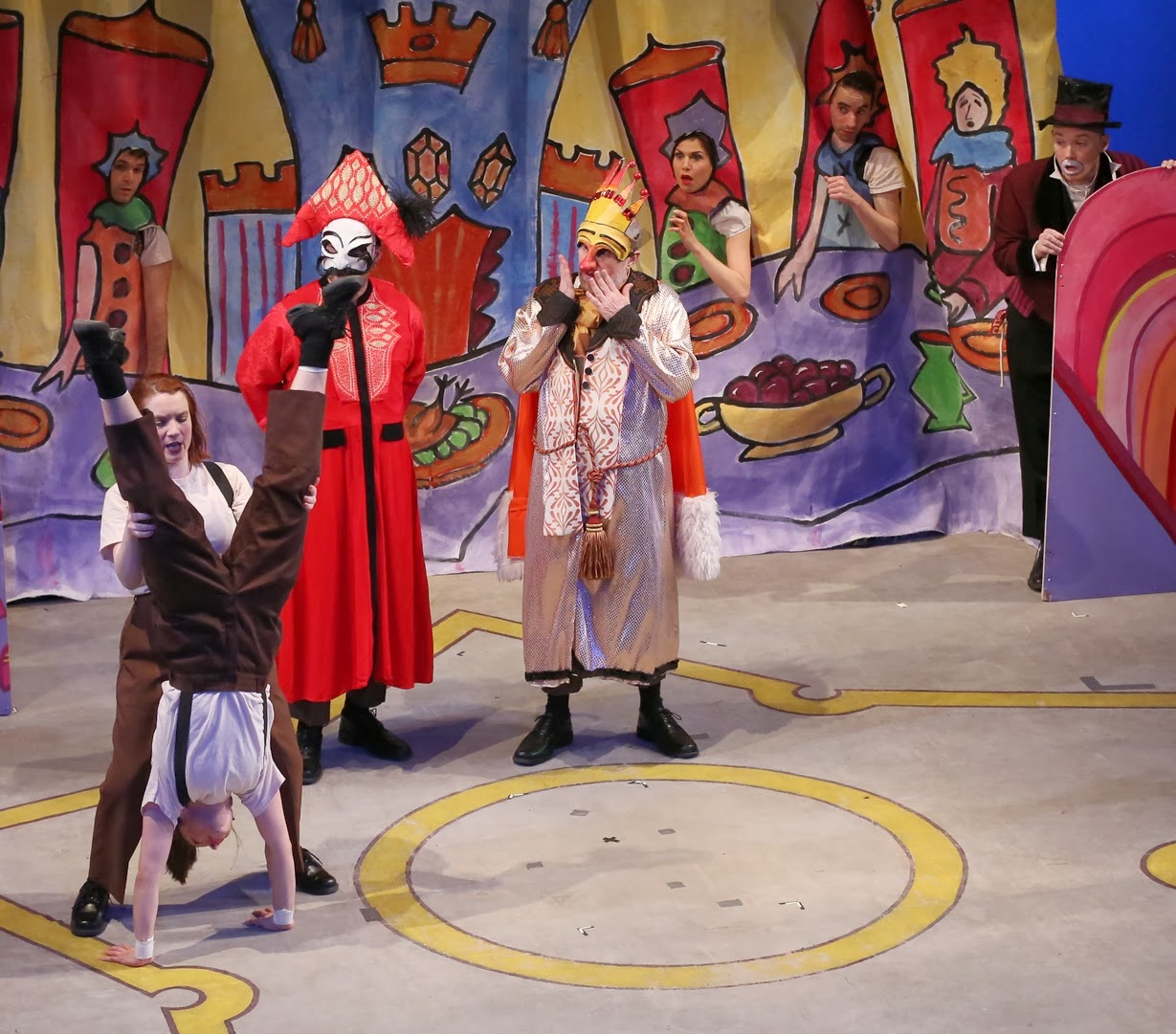 In red costume and hat, Adam Shapiro; to his left, Stephen Mo Hanan. Photo: Crystal Arnett.
THE MEGILE OF ITZIK MANGER is being produced by the National Yiddish Theatre, the venerable Folksbiene, at the Baruch Performing Arts Center. It originally was seen on Broadway at the John Golden Theatre in 1968, where it was set in a Jewish village. With the title spelled THE MEGILLA OF ITZIK MANGER, it was given in both Yiddish and English, and starred leading Yiddish players Pesach Burstein, Mike Burstein, and Lillian Lux. The lighting design was by my college professor Eldon Elder and the assistant director was Amnon Kabatchnik, a later colleague of mine. It returned a year later to Broadway's Longacre Theatre for a week-long run. There are no program notes in the current program, but here's some of what the 1968 program had to say:

"The Megilla of Itzik Manger is a very old story told in a new, or rather a different way. Itzik Manger [then still living] is a true folk poet, and folk poets sing in a simple manner. Taking the story of Esther, the Purim story, from the Bible, he has added to it the wisdom, the tears and the laughter of a culture he was born into and knew very well. His first environment was the Jewish "shtetel", the village of Eastern Europe. Manger himself was once a tailor in such a shtetel. So now he tells this story of kings and queens, of arch villains and high events, as they would be seen through the eyes of such a man. The king is not a king. He is what a simple village workingman imagines a king to be. Manger wrote his Purim story as a series of related poems. And it is not accidental that a tailor's apprentice creeps into the legend for the first time, for it is the tailors themselves who bring the story to us."

The notes go on to tell us that Shmuel Bunim dramatized the poems and created the play for its premiere in Israel. "Using the 'Purimspiel' as a basis--and the Purimspiel was true folk theatre, perhaps the only theatre practiced by the Jews of the Shtetlach--he added modern theatre techniques and even a touch of Commedia dell'arte where he thought it was needed. . . . What has resulted from this work is not a continuation of the Yiddish Theatre as we know it, but a complete departure from it into a new form."  Composer Dov Seltzer wrote all new music for the show, keeping it as close to the folk quality as possible.
The Folksbiene version conceptualizes the story within the world of a Polish circus, where the performers resort to various theatrical devices to tell it. (The same idea informs the current revival of PIPPIN.) Except for some introductory remarks in English by the always amusing Avi Hoffman, who plays Loyfer, the circus master emcee, the show is entirely in Yiddish, with English and Russian surtitles projected on an upstage screen and on another placed over a high platform at stage right. The title projections work well enough, keeping pace with the dialogue and lyrics, but it’s always a distraction when watching a live show to keep looking up to read the translation, forcing you to take your eyes off the performance. I’m an avid watcher of subtitled movies, where the placement of the titles in front of the action doesn’t hinder your involvement in the story going on behind them.  I even use them when they’re available for English-language movies on DVD because I thereby don’t miss any mumbled dialogue. But the theatre has yet to find a comparably effective system for plays in foreign languages. In the 1968 version, Joe Darion created English commentaries to help the audience follow along, but it's not clear how these were introduced.


Company of THE MEGILE OF ITZIK MANGER. Photo: Crystal Arnette.


Still, a show like this, with its easily digestible, even sometimes simplistic book and lyrics (by Shmuel Bunim, Haim Hefer, Itzik Manger, and Dov Seltzer) suggestive of a fairy tale, makes the surtitle problem less bothersome, and before long you get more or less used to their presence. Everything takes place inside a thrust stage designed by Jenny Romaine like a circus ring; most of the actors perform as an ensemble, in white T-shirts, slightly shortened trousers, and suspenders when not playing specific characters, but in a variety of period costumes, some of them highly stylized, for the major roles. Those roles include the foolish, drunken king, Akheshveyresh (Stephen Mo Hanan, very good); his beautiful wife Vashti (Rebecca Keren, appealing), whom he executes when she refuses to appear naked before his guests; the righteous Mordkhe (Adam Shapiro, admirable), an influential businessman; his lovely niece Esther (Stacey Harris, charming), who wins a beauty contest to become the new queen; Fastrigosse (Andrew Keitz, earnest), the poor tailor who loves Esther; and Homen (Mr. Shapiro, hiss-worthy), the wicked minister who seeks to bring destruction to the Jews but, through Esther's heroism, ends up being hung for his efforts.

Several of the principals also wear exaggerated masks and both shadow and traditional puppets of varying sizes are introduced. Everything is designed and performed broadly, with lots of vigorous choreography by Merete Muenter, and with almost nonstop klezmer music under the stirring direction of Zalmen Mlotek.


The idea of setting the show within a Polish traveling circus sometime around the turn of the 20th century works fine for the old story, but after an hour or so the conceit eventually wears thin, the music begins to sound repetitious, and the cartoonish characters become less interesting The circus skills displayed are fairly rudimentary when compared to those that have filled the stages of recent shows like LA SOIRÉE, CIRKOPOLIS, MOTHER AFRICA, and the like, and consists of things like basic juggling, acrobatic flips, and an aerial act using hanging strips of cloth.


The familiar Purim story gives us the word hamentash for the triangular cookies stuffed with fruit or other goodies eaten at Purim and named for the villainous Hamen, whose three-cornered hat is reflected in the cookies’ shape. Just as you can eat only so much hamentashen on Purim, you can appreciate only so much of THE MEGILE OF ITZIK MANGER before feeling sated. Nevertheless, many will get a kick out of the show, which would be especially worthwhile for kids. It’s good to see that Yiddish theatre continues to live in New York and that there are still highly talented young actors with the language skills to provide it.
Posted by Samuel L. Leiter at 1:42 PM