234. THE SHAPE OF SOMETHING SQUASHED 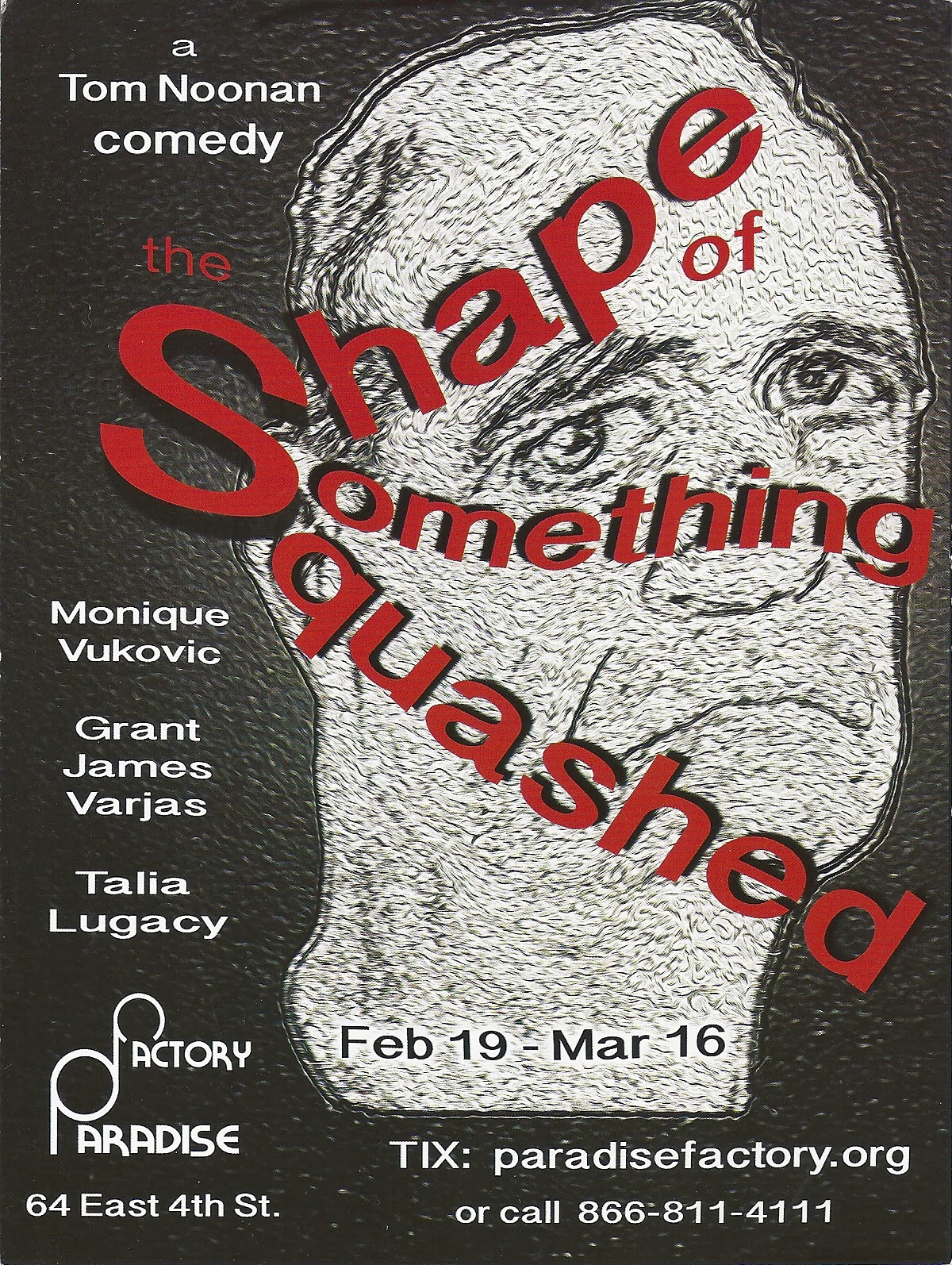 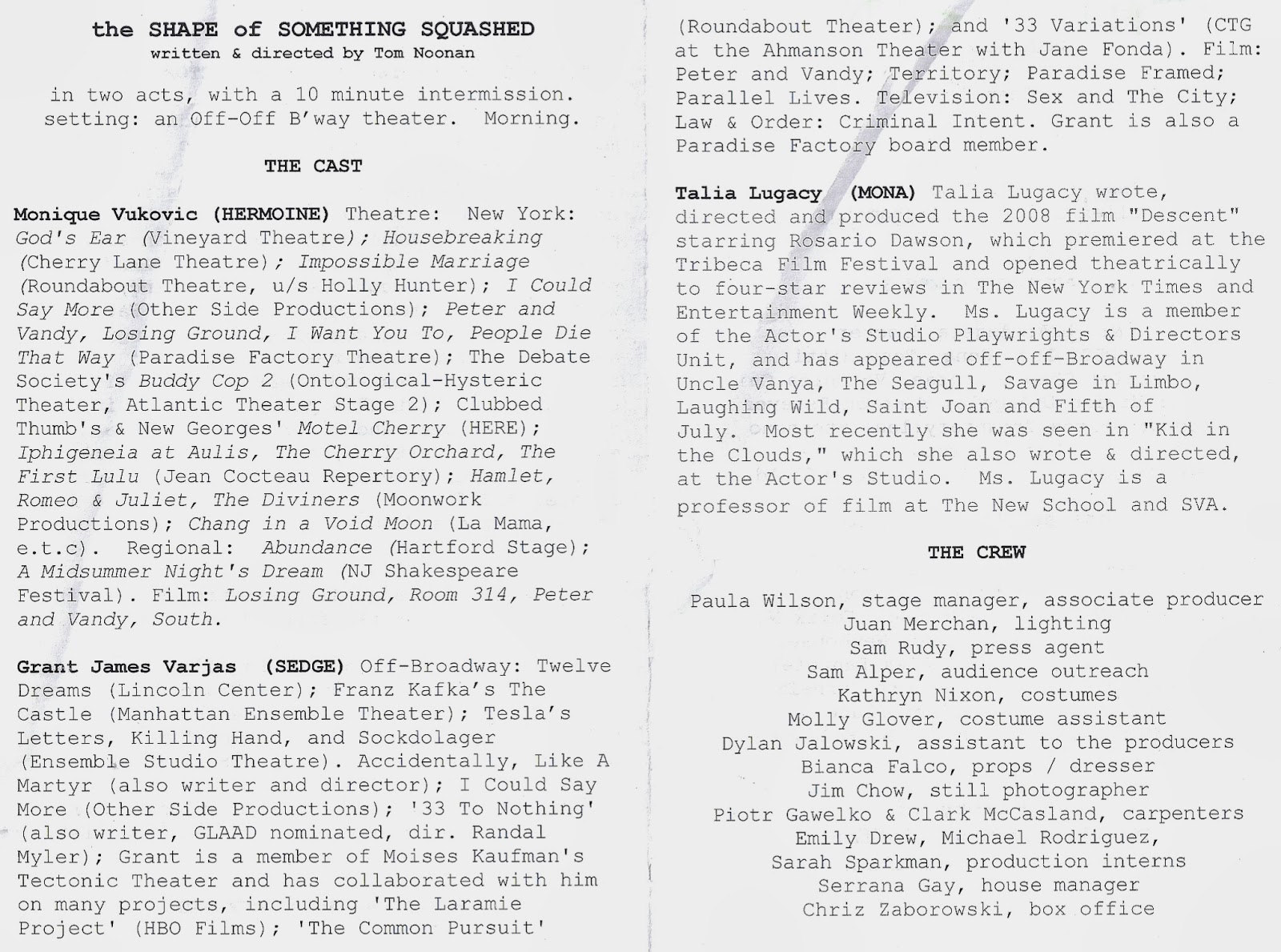 Tom Noonan, an interesting actor I first saw in Sam Shepard’s BURIED CHILD in 1978, is an imposing figure, 6 feet 7 inches tall. His presence dominates THE SHAPE OF SOMETHING SQUASHED, which he also wrote and directed, and is made even more distinct by the dyed black hair and bushy mustache he wears. For some reason, neither he nor his role are listed in the rather amateurishly printed program provided for the play (which spells the character name Hermione as Hermoine). The four-character drama is being shown at Paradise Factory, an East 4th Street venue down the block from La Mama and across from the New York Theatre Workshop. Reportedly, the place has undergone a multimillion dollar renovation before reopening for business with this production. Mr. Noonan seems to be the proprietor, as in references to Tom Noonan’s Paradise Factory. 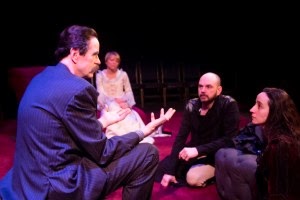 
There’s nothing particularly noteworthy about the theatre, it being a small, black box with variable seating, in this case arranged in a three-quarter round configuration. The locale for the play is backstage at an Off Off Broadway theatre, presumably one like the Paradise Factory itself. For a set, there are curtains along the back wall, a divan, and two round ottomans. No designer is credited. 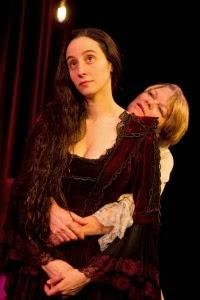 Talia Lugacy, Monique Vukovic. Photo: Jim Chow.
The characters are all theatre people, and the premise is that they are hoping to present a producer’s reading of a new work by Sedge (Grant James Varjas), the theatre’s eccentric, self-involved artistic director; his company’s life or death depend on the success of the reading. The company star is Hermione (Monique Vukovic), a diminutive actress in early middle age, with pixie-like features and short, blonde hair. Another character is the heavily accented Mona (Talia Lugacy), from Uzbekistan (I think), whose long, wavy hair is constantly referenced in the dialogue. Like Sedge and Hermione, she wears a Renaissance-style costume; her name, given to her by Sedge, is a tribute to her resemblance to Mona Lisa. She’s something of a servant-intern-sex slave (which she denies), doing everything needed around the theatre, including keeping a verbatim record of whatever anyone says (although we never see her do this), in hopes of getting a green card. She fears for her life if she returns to her native country. Into this mélange comes Douglas Whymper (Mr. Noonan), a hapless, has-been actor-musician, wearing a black, pin-striped suit and, instead of a shirt and tie, a sort of scarf tucked under his jacket. The costumes are by Kathryn Nixon.


A famous actor, Sir Oliver, is supposed to participate in the reading, which is aimed at a pair of Toronto producers, but he may not be able to do so; he hates Hermione, it seems. Hermione refuses to read with anyone else. Eventually, Douglas is allowed to audition to replace Oliver. Up till now he’s been treated disparagingly by everyone as if he’s there as a chauffeur or “driver,” and no one ever allows him to explain his presence. When he finally reveals that he’s an actor, and is given a chance to read, he somehow already knows all the lines. This angers Hermione, who blames him for showing her up. She finds him unimpressive, inspiring her to give an impassioned speech about what it takes to be a real actor and how she hates all mediocre actors and doesn’t believe in doing anything to help them; only Mona is upset by this outburst of artistic selfishness. Douglas gets another chance, however, and this time allows all his feelings to come out, which awes everybody so much that he’s allowed to read for the producers. But then Sir Oliver changes his mind, and Douglas is overlooked again. Such, after all, is life in the theatre.


The production has an odd, snail-paced aura that deprives it of any sense of reality. It’s very hard to get caught up in any of the plot’s machinations or to believe in any of the characters, although the actors all are professionally qualified. Oddest of all is Mr. Noonan, who plays his role (which also allows him to perform at a keyboard) with a kind of hangdog shyness and hesitancy; he speaks and reacts with tentative half smiles, starts, and stops that reveal he’s clearly not the driver he’s mistaken for; he simply hasn’t the gumption to say who he is. This approach grows increasingly monotonous and uninteresting in both the writing and the acting. As it is, Douglas is not merely an actor, but a composer-writer who created a one-man musical about Friedrich Nietzsche. (For more on Nietzsche on stage, see my review of PHILOSOPHY FOR GANGSTERS.) Perhaps that explains the mustache, at any rate. I'm not sure it explains anything else.


Mr. Noonan’s relentlessly tedious play began to make me feel uncomfortable even before the intermission arrived. By the time it ended, after two hours of sitting on an uncomfortable chair, I myself felt very much like something squashed.
Posted by Samuel L. Leiter at 8:53 AM