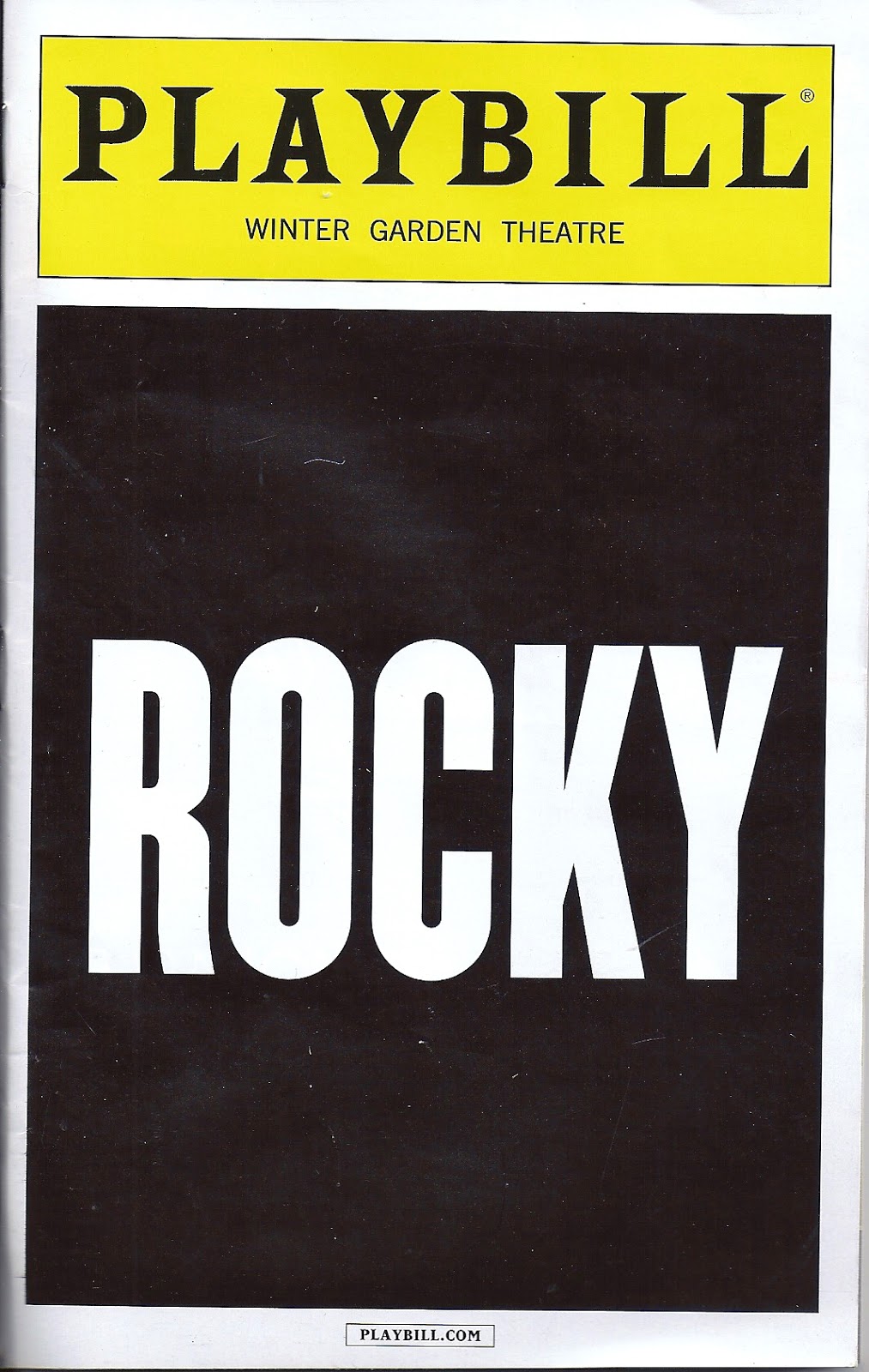 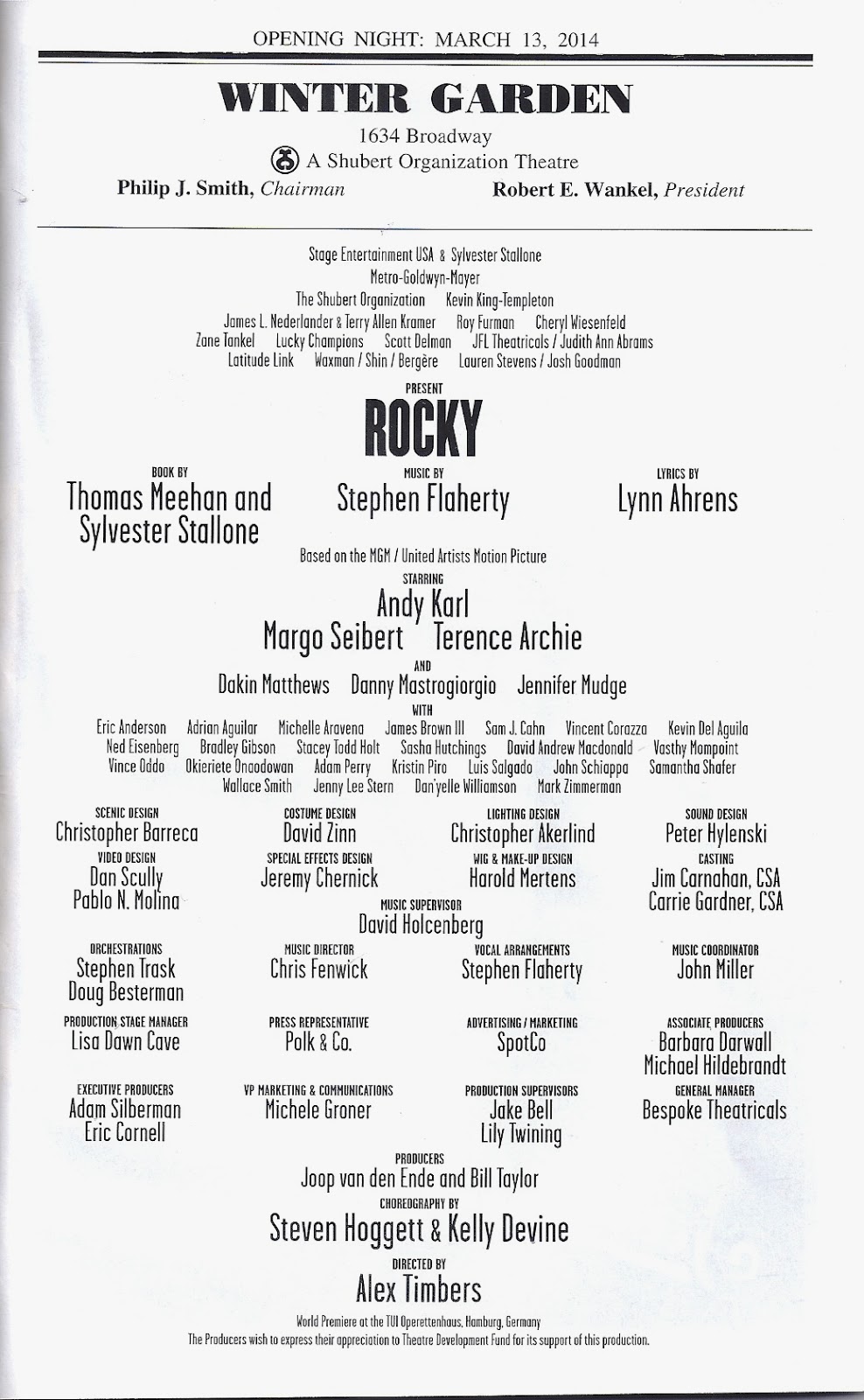 ROCKY, the muscle-bound Broadway musical—or should I say bruisical—that opened on Wednesday at the Winter Garden Theatre, lumbers along for its first 14 rounds, punching and jabbing listlessly with only a few blows actually landing. Then, two hours after the bout begins, it explodes in a flurry of sensational theatricalism that gets the audience’s adrenaline soaring and that may be the most spectacular and rousing conclusion to a Broadway show I’ve ever seen. But to get there you have to sit through a faithful but sluggish replication of the enormously popular Sylvester Stallone 1976 movie of the same name. (It’s nice, by the way, to have a movie-based musical without “The Musical” as part of its title.) Stallone, of course, wrote the film script and played Rocky Balboa, the intelligence-challenged South Philadelphia pug who, at 29, is reduced to earning his living as a thug by bill collecting for a local hoodlum, but who, out of nowhere, gets a chance to compete against the world champion heavyweight, Apollo Creed, and goes head to head with him for fifteen brutal rounds. ROCKY (the movie) became a franchise leading to four sequels, three of them also directed by Stallone. (The first film, shot in only 28 days, cost $1 million to make, the Broadway show $30 million.) 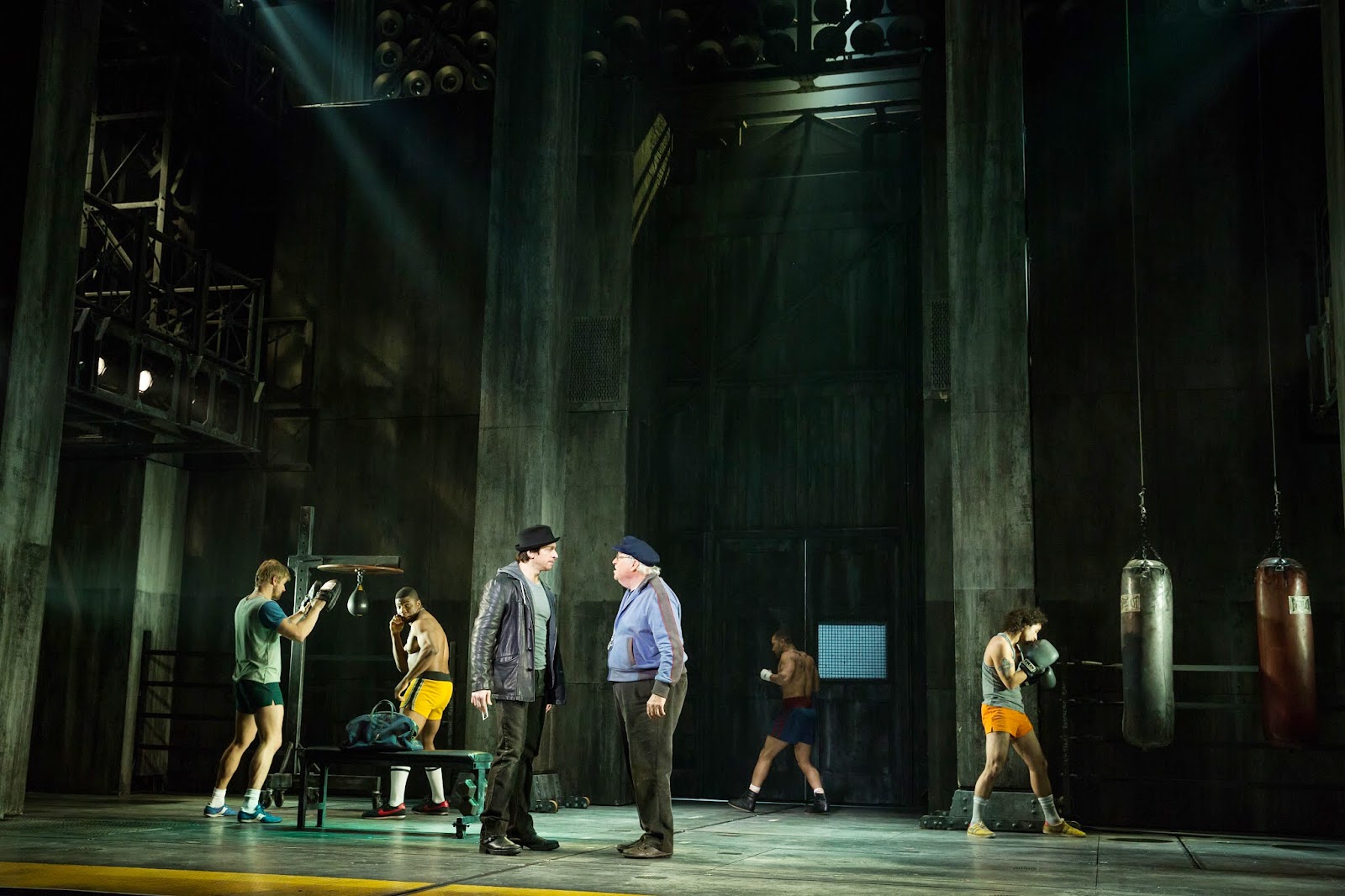 
Almost every iconic element of the movie has been transferred to the stage, including Rocky’s (Andy Karl) love affair with the overly shy Adrian (Margo Siebert), his downing of three raw eggs when in training, his working out by punching slabs of beef in a meat packing freezer (a great visual effect), his early morning runs, and his famous dash up the steps of the Philadelphia Museum of Art. Of course, “Yo, Adrian” runs like a light motif throughout, as does, unfortunately, Bill Conti’s “Eye of the Tiger.” I say unfortunately since it’s as catchy and hypnotic an anthem as ever and completely overshadows the new score by Stephen Flaherty (music) and Lynn Ahrens (lyrics). Mr. Stallone and Thomas Meehan are credited with turning the film script into a libretto. None of the new songs is more than passably interesting, and the only one that sticks in my mind is Rocky’s paean of self praise, “My Nose Ain’t Broken,” mostly because of its innocuousness. 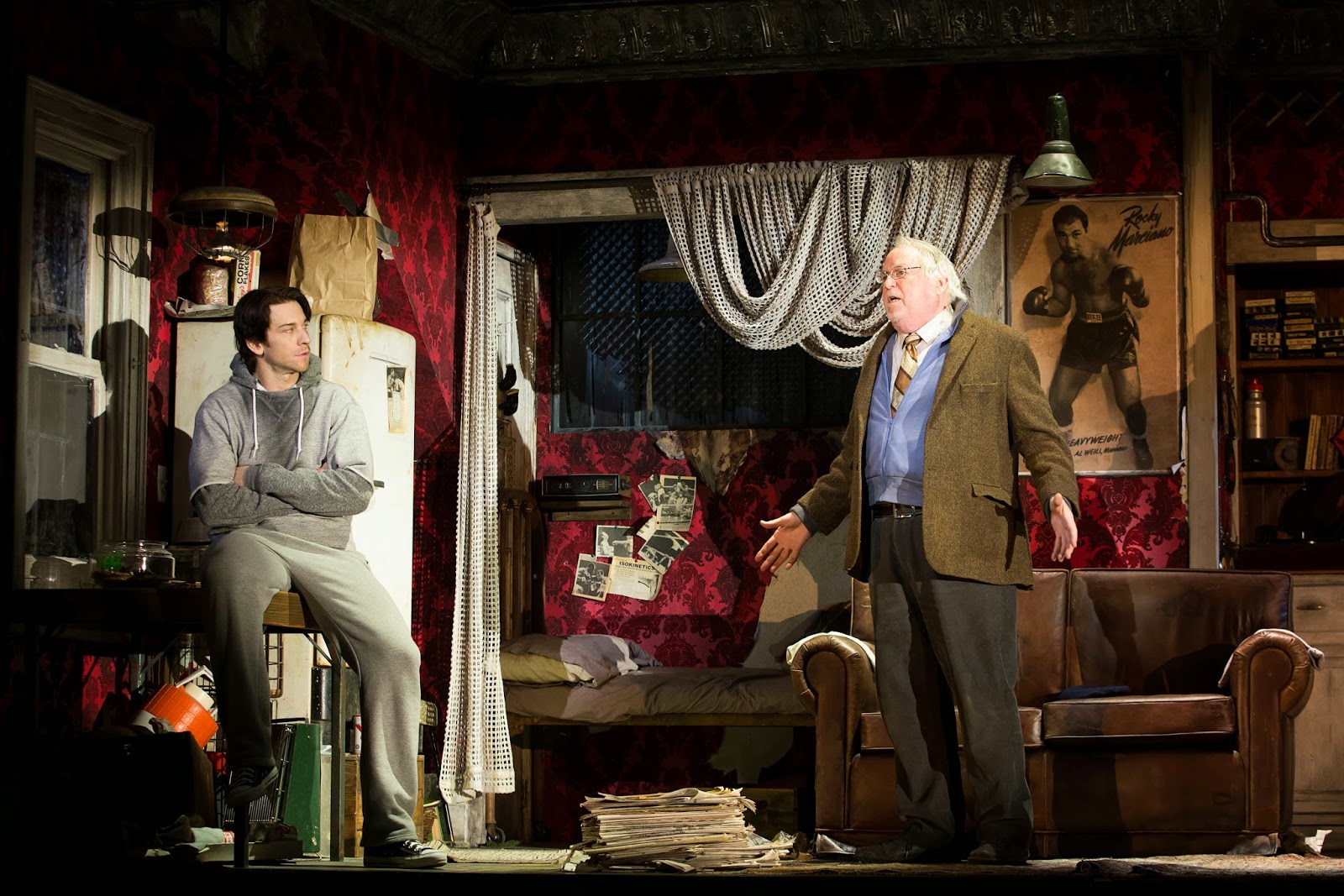 
Of course, Mr. Stallone was sui generis as Rocky, and it would probably be impossible to find someone who could play the character with the same convincing level of lower-class Philly speech, behavior, and emotional sweetness, while also looking like someone who could take the punishment administered by a heavyweight champ. Andy Karl, pumped up with months of gym work, is physically impressive, and is a superbly talented Broadway singer (I loved him in last season’s THE MYSTERY OF EDWIN DROOD), but for all his earnest attempts to capture Rocky’s working-class cachet, he succeeds only in demonstrating the attempt and not the realization. The result is an ersatz Rocky, lacking the genuine honesty of the original; Mr. Karl, whose natural speech keeps seeping through, simply sounds too smart. Margo Siebert as Adrian, the meek pet shop worker who becomes beautiful by taking off her glasses (where have we seen that before?), sings beautifully, but she’s essentially  colorless in a colorless role, and neither Dakin Matthews as Mickey, the grizzled old trainer, nor Danny Mastrogiorgio as Paulie, Adrian’s crudely aggressive brother, come near the distinctively etched characterizations of Burgess Meredith or Burt Young in the movie, not unless shouting is considered a mark of acting distinction. Terence Archie, however, as the egotistical showman cum boxer Apollo Creed, displays an incredible physique (he has fun rippling his pecs), and terrifically smooth performance chops when singing and dancing. His seems the only role that makes the transition from the movie's gritty realism to the musical's more stylized intentions.


There isn’t much traditional Broadway dancing in the show, which has been choreographed by Steven Hoggett and Kelly Devine, but the fight sequences, especially the climactic one, are brilliant expositions of the use of boxing movements within a strict rhythmically controlled framework. That scene is the culmination of a design-oriented show in which every expensive technical element (including marvelously complex lighting by Christopher Akerlind) has been corralled to produce fast-moving scene changes that move from naturalistically detailed interiors on sliding stages to the huge concrete pillars of Mickey’s gym to the impressively soaring walls of fight promoter Miles Jergens’s (David Andrew MacDonald) office to the predawn streets of South Philadelphia (aided by video projections by Don Scully and Pablo N. Molina) to the final scene of the Creed-Balboa championship match.
Aside from Jergens’s office, most of the scenery favors a grim, industrial tone, with grid-like metal columns, flying catwalks, and bridgeways, all in shades of gray and black, but with the big fight scene the theatre becomes an actual boxing arena. Spectators in the first seven or so orchestra rows are shepherded onto upstage bleachers; the onstage boxing ring slides forward to replace them so that it sits over their former seats; a large, four-sided video and information tower hangs overhead; and the space above the onstage audience is filled with oversized videos of announcers covering the fight. As the fight proceeds, first in real and then in speeded up time, the ring revolves and we see the fight from various angles, with powder flying like a haze of sweat when blows are landed. This montage-effect of showing the entire fight, with video technicians running here and there, and gorgeous card girls moving through the action showing which round we’re in, is something spectators will take away as a lifetime memory.


The same thing might be said, though, of the flying sequences in SPIDERMAN: TURN OFF THE DARK, a major flop. A Broadway musical needs more than spectacle, no matter how unforgettable, to succeed. In that sense, ROCKY, like its hero, is an underdog--an expensive one, at that--for whom success will depend more on guts and good luck than on mere talent and ability. If twenty minutes of spectacle can do the job, then ROCKY, shaky as its legs may be, has a chance of going the distance.
Posted by Samuel L. Leiter at 9:26 AM