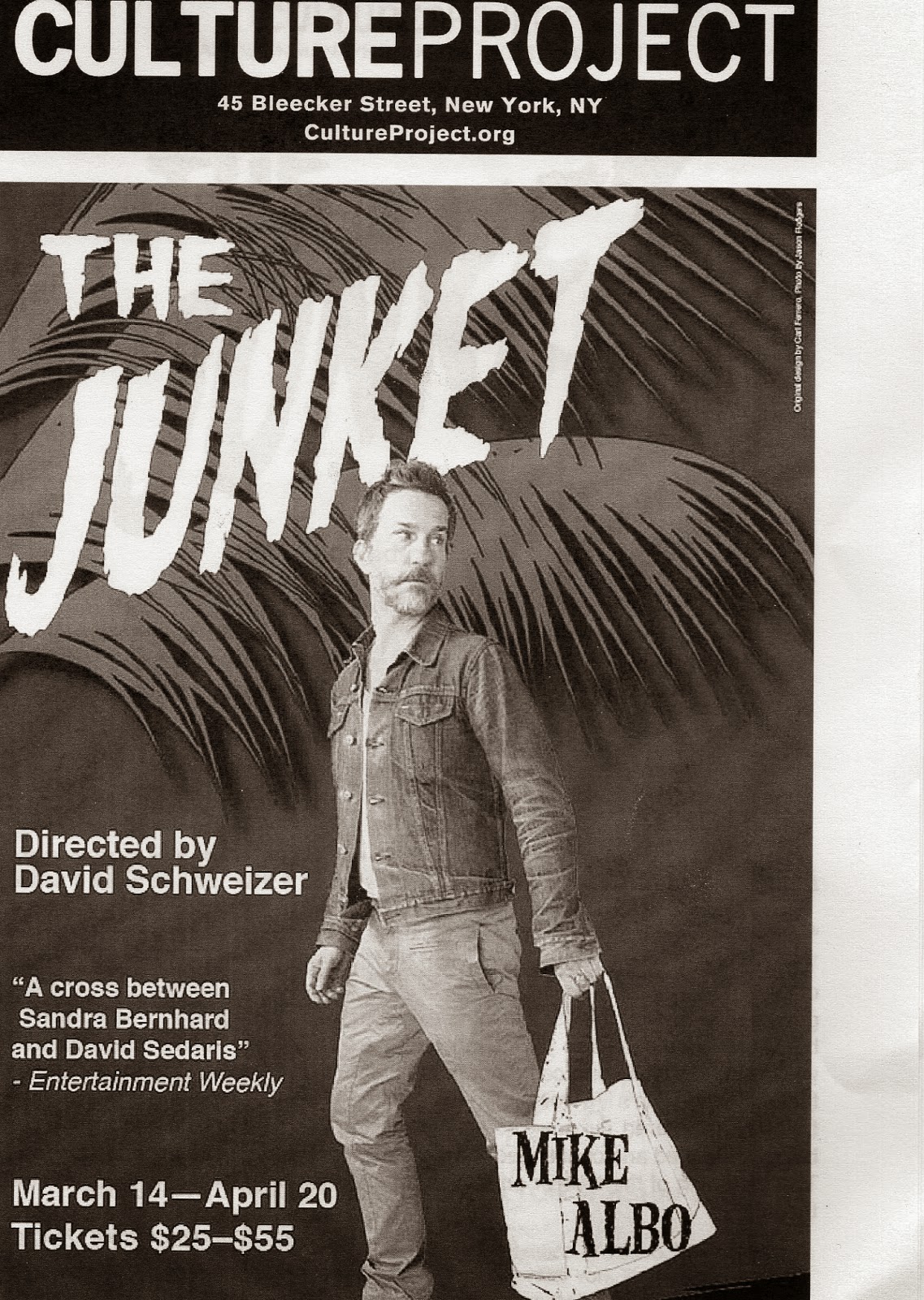 Trying to squeeze in as many shows as possible before the official end of the awards season, I visited the Culture Project at the Lynn Redgrave Theatre on Bleecker near Lafayette Thursday night to catch a pair of one-man plays: Mike Albo’s THE JUNKET and Dan Hoyle’s THE REAL AMERICANS. They’re playing in repertory and their time schedules vary, but when I went THE JUNKET started at 7:00 and THE REAL AMERICANS at 9:00, with about 50 minutes between them. Each is around an hour and 15 minutes. Both are well-done exercises based on the performer-writers’ personal experiences; they use a bare stage with only a few basic props or chairs. Albo’s play employs a considerable amount of projections and videos (nicely done by Larry Shea), while Hoyle’s employs only some subtitles for one section.  Sound design plays no part in THE JUNKET but David Hines has created an effective sound design, with both effects and music, for THE REAL AMERICANS. Both plays also are carefully lit, Albo’s by Robert Lilly, and Hoyle’s by Jason Miller, but, for the most part, these are barebones presentations, with the actor and his story at their heart.
THE JUNKET, directed by the well-known veteran David Schweizer, has been around for a couple of years, including a brief stint at Dixon Place, and is an adaptation of Mr. Albo’s 2011 novella of the same title.  He’s best known as a widely published journalist, and it was his stint as a writer for the New York Times, writing the “Critical Shopper” column, that inspired THE JUNKET. A slight, nice-looking, lightly bearded, somewhat pixie-like gay man, Mr. Albo appears looking something like a beachcomber, barefoot and in short white slacks and a white shirt (Roy Napier is the costume designer), to tell his story of how, in 2009, he accepted, with some reservations, an offer made to a number of journalists to go on an expense-paid promotional junket to a nice hotel in Jamaica in hopes of getting them to write about it. Although Albo went without intending to write anything, his trip was reported online by a gossipy blogger and the Times, after first declaring there was nothing wrong with his going, changed its mind in the wake of the bad publicity on the Internet, announced that he’d violated their ethical code, and fired him.

Using fake names--Thrillist becomes Dudester,  JetBlue becomes TripBlue, Gawker becomes Jabber, and the New York Times becomes the New York Tomes--Mr. Albo tells his story with colorful anecdotes about what he encountered, making especially clear that he wasn't a regular employee of the Times but instead only a freelancer, who, ordinarily, would not feel constrained about accepting such swag, especially as it had nothing to do with the Times. 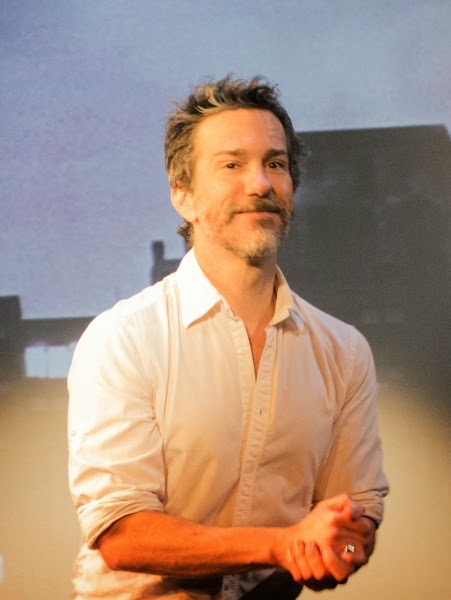 The piece, which is a mildly fictionalized account of the actual events, provides a diverting cautionary tale about the murky world of contemporary journalism, and the tension between the new world of electronic media and the old world of print journalism. Although Mr. Albo maintains an equitable disposition in telling the story, the Times doesn’t come off as equitable in the way it handled the situation.


Mr. Albo is a pleasant presence, but, despite his having performed other solo shows, he doesn’t have the equipment of a professional actor, and his consistently low-key and often almost whispered presentation could use more vocal variety. He moves nicely and does some amusing physical things, especially when posing comically in front of one of those backgrounds filled with commercial logos, and he’s always ingratiating, which is part of the piece’s charm, but I’d like to have seen some more vitriol from him. Still, he can be quite funny, and does a nice job of mimicking several people, including Taylor, the PR woman he meets on his junket. There are a number of gay-oriented elements, such as his sharing another man with a Condé Nast editor, which leads to his singing “cock in common” to the tune of “Rockin’ Robin.” 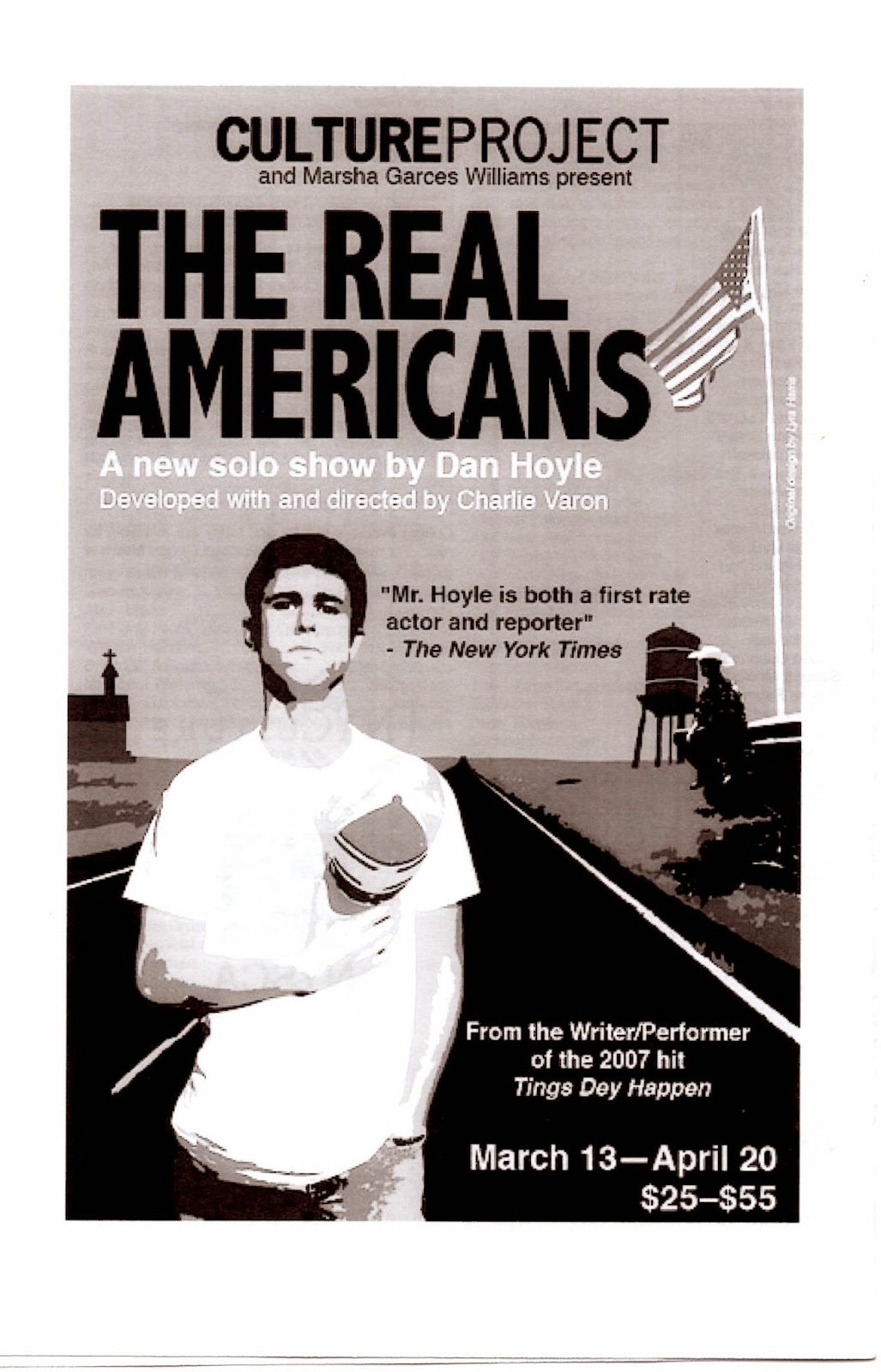 Much more polished as a performer is Dan Hoyle, the journalist who stars in THE REAL AMERICANS, but, for all his remarkable versatility, I was more taken by Mr. Albo’s tale in THE JUNKET. Mr. Hoyle's piece, previously seen at Joe’s Pub, is also a work of reportage, and deals with his departure from San Francisco’s hip life, the “latte liberal bubble,” for a three-month trip to America’s heartland, including Texas, Alabama, Wisconsin, and Chicago, to gauge the difference between the “real Americans” (as per Sarah Palin) he would encounter and the life and attitudes he knew in his liberal cocoon. He met black, Latino, and white, male and female, straight and gay, employed and unemployed, Rapture-believing, Obama-hating, gun-toting, pie-eating, and beer guzzling folks, each of which he embodies with chameleon-like alterations of his face, body, and voice, using little more than a hat or rolled-up sleeves to differentiate one person from another. Several characters have accents bordering on the impenetrable, and one is, indeed, so hard to understand he uses subtitles flashed on a black velvet curtain to help us understand.


Mr. Hoyle discovered the same racism, ignorance, and fundamentalist feelings he had hoped to confound, giving one chills about many of the people who call themselves "real Americans." But the liberal elite characters he limns don’t come off very well either; Mr. Hoyle is an equal-opportunity observer. Whoever you are, you’ll find something here that stings.


Interesting and funny as much of this is, it becomes a string of narratives that gradually lose interest. Perhaps I’ve seen too many TV documentaries about similar people, like those filmed by Alexandra Pelosi, but there aren't many surprises; ultimately the performance overwhelms the material. The audience, however, was with Mr. Hoyle throughout, and many will surely enjoy his marvelous incarnation of so many “real Americans.”
Posted by Samuel L. Leiter at 8:33 AM