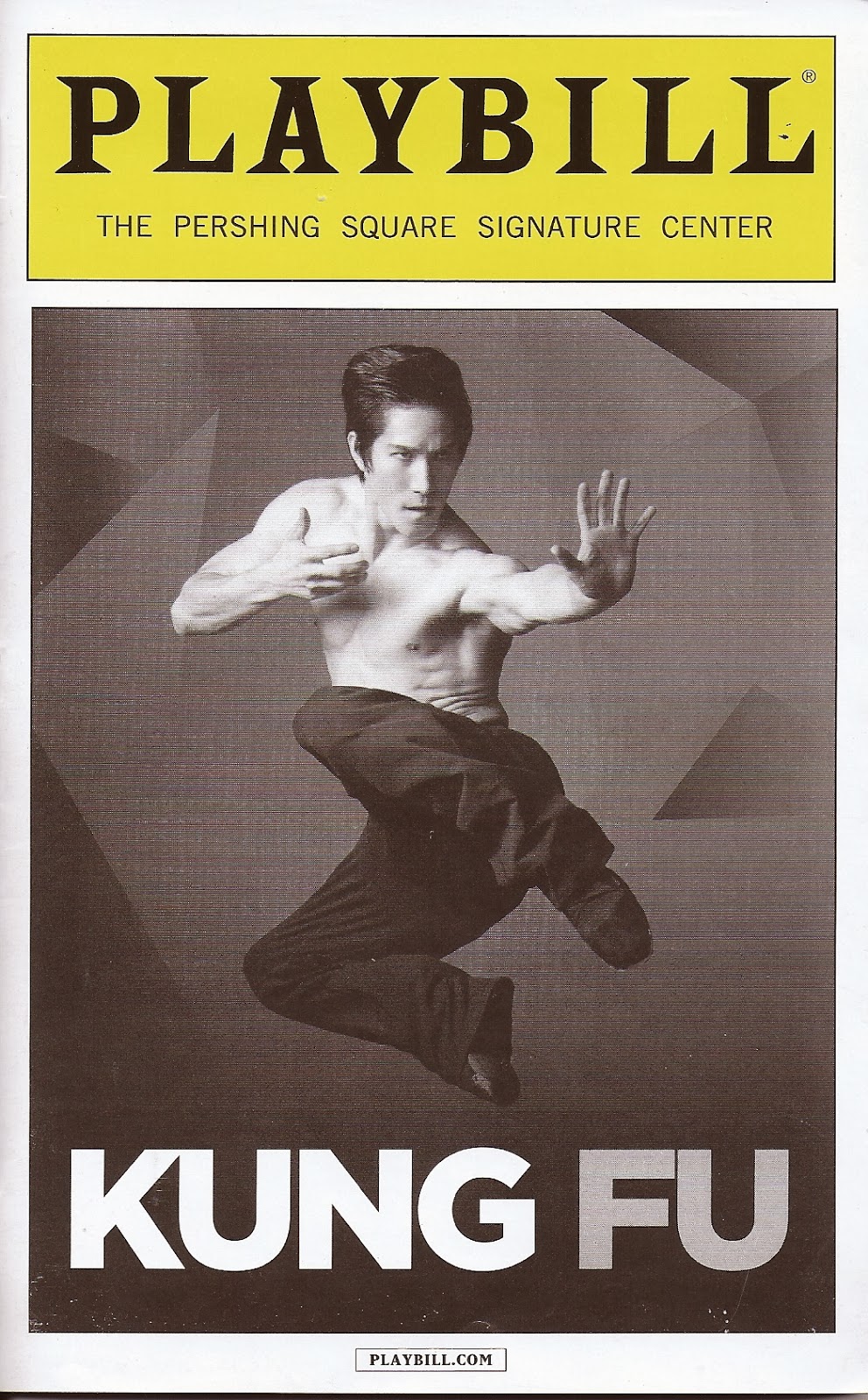 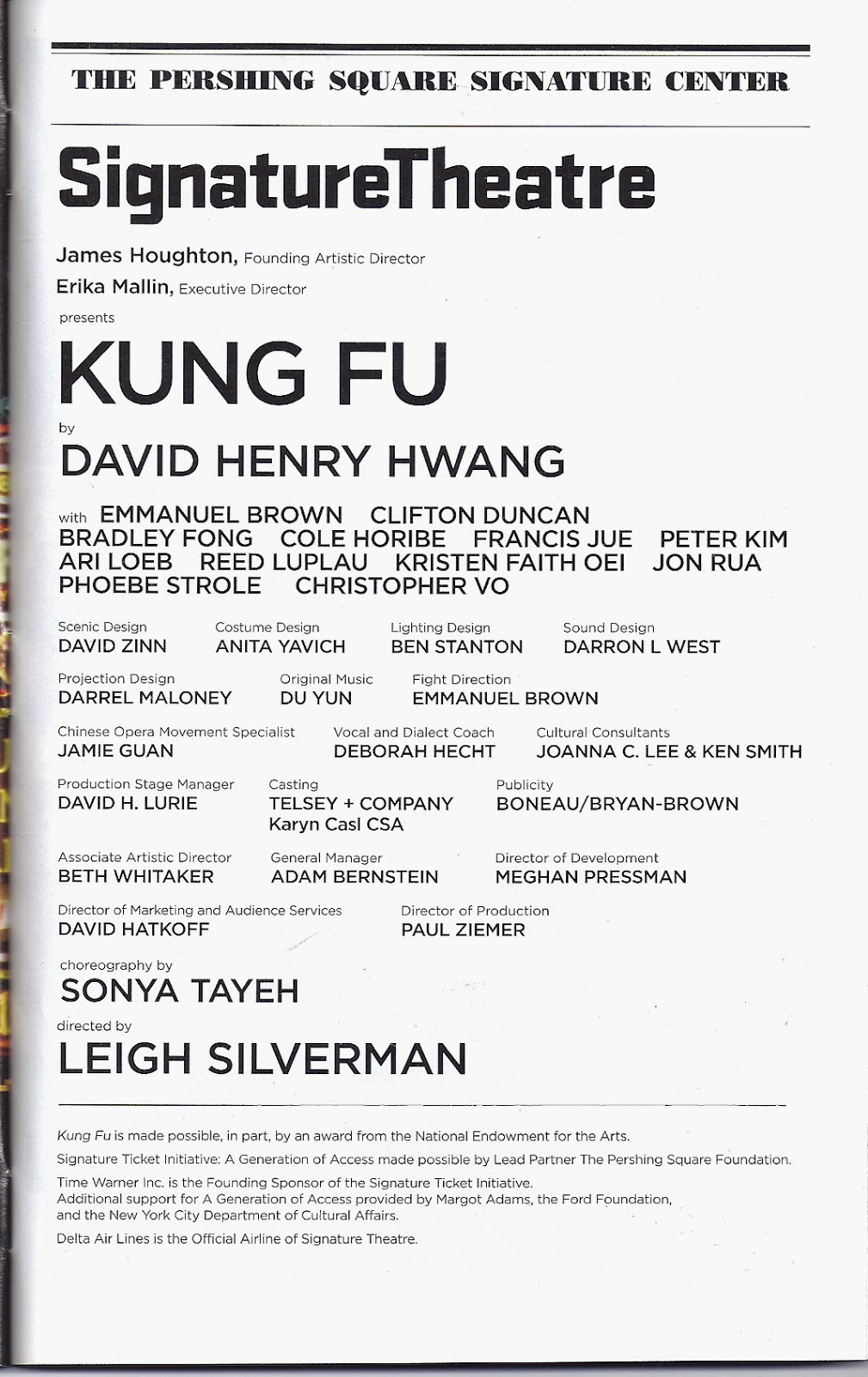 Bruce Lee, the American-born, Hong Kong-raised Asian martial arts actor who died just as his career was exploding, is a fascinating subject for a biodrama. Handsome, beautifully built, articulate, supremely gifted as a teacher, theorist, and practitioner of kung fu and other combative sports, and with a background in traditional Chinese theatre, where his father was a famous performer, he had all the qualities to become the first major Asian Hollywood action star. However, Hollywood’s suits were too narrow-minded to see just what they had in him, thinking that the American public wasn’t ready for an Asian star, and he had to establish himself with a career in Hong Kong movies before his moment arrived on this side of the Pacific.


David Henry Hwang, America’s foremost stage chronicler of the Asian-American experience, puts Lee at the center of a promising and often entertaining, if unfulfilled, play, KUNG FU, at the Signature Theatre, that tells his story in episodic fashion, using flashbacks and various theatrical devices to introduce his childhood (during which he acted in Hong Kong movies); his uneasy adolescence as a street fighter (my daughter-in-law’s father went to school with him and vouches for him as a troublemaker); his strained relationship with his father, an actor in the Cantonese-style traditional theatre; his career in Los Angeles as a successful teacher of martial arts to movie stars like Steve McQueen and James Coburn; his short-lived success as Kato, the fighting chauffeur in service to the Green Hornet on the TV show of that name; his creation of the idea for the popular TV show, “Kung Fu,” which overlooked him in favor of David Carradine; and various aspects of his private life, including his marriage to a Caucasian woman, Linda (Phoebe Strole), who bore him two children. 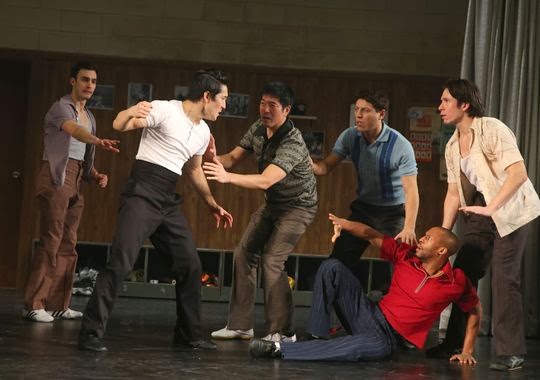 With Japanese-American Cole Horibe, a runner-up on TV’s “So You Think You Can Dance,” as Lee, Mr. Hwang and director Leigh Silverman have a reasonable physical manifestation of the original to carry off their project, even though Mr. Horibe seems to be making his acting debut in it. His bio establishes his martial arts expertise, both in taekwando and kung fu, and his dancing talents are brilliantly in evidence; his acting, while lacking in subtlety (he tends to shout too much, for one thing), nevertheless is sufficient unto the task, and he does a pretty good job of standing in for a man of legendary charisma.


When we first see him, he’s a hotshot with a tall pompadour, glasses, a wad of gum at which he chews away, and a noticeable if mild Chinese accent (more pronounced than his actual one, which can be heard in YouTube interviews) but he soon enough overcomes the nerdy image as he picks up a Japanese-American girl at a gym and soon has her enthralled by his cha-cha moves. Quickly, he matures into the cocky, ambitious, chauvinistic, hot-tempered Lee, who marries and begins to make enough money to buy a fancy L.A. house (which he barely furnishes), but eventually has to return to teaching (at high prices) when his career gets punched around. Lee, always philosophical, is prone to spouting spiritualistic aphorisms about the martial arts, such as those about fighting without fighting.


The story unfolds on a stage designed by David Zinn that very believably recreates a martial arts training studio but that, by changing the back wall via sliding units, allows for a variety of other locales—from Seattle to Hong Kong to L.A. to India—to be suggested without ever altering the gym-like framework. With terrific lighting by Ben Stanton (my son thought the light streaming into the gym was from the street outside), costumes by Anita Yavich ranging from stylized Chinese theatre garb to everyday wear, original music by Du Yun, projections by Darrel Maloney (including comic book effects to emphasize the violence), sound design by Darron L. West, Chinese theatre routines staged by Jamie Guan, fight direction by Emmanuel Brown, and sensational fighting-inspired choreography by Sonya Tayeh, the show sometimes crosses the border into musical theatre, with outstanding set numbers that help to tell the story, effectively combining naturalism and theatricality. Most of the supporting actors play multiple roles with gusto and versatility, and the blend of stylization and realism makes it possible to accept, for example, black actor Clifton Duncan playing white actor James Coburn without being concerned for authenticity.


Biodramas of famous people, especially film stars, are often stiffly written enterprises, forced to stick to the known aspects of the lives being shown so as not to offend knowledgeable fans, yet also required to make their subjects seem convincing as human beings. Moreover, an audience attending a show like KUNG FU will be very interested in seeing something of what the central character was famous for, in this case Bruce Lee’s martial arts skills. To a great extent, this production, while imperfect as a drama, is triumphant in putting a semblance of Lee’s abilities on stage, albeit in the difficult context of live action where actors have to avoid actually hitting each other and lack the kinds of technical aids, like sound effects, camera angles, and editing, to make their blows seem true. Audiences at KUNG FU should be pleased with the fight and training sequences, several of which are expanded into group dance numbers creatively managed by the choreographer and her support staff.


Having expected the paint-by-numbers approach typical of most biodramas, I found myself thoroughly engaged by the play’s first act, which moved swiftly, introduced its themes clearly (especially that of Lee’s conflicted relationship with his dad, Hoi-Chuen, played excellently by Francis Jue), and left me fairly exhilarated when it concluded. Act two, however, bogs down, with talky family scenes that go on too long, especially a couple that have Lee flat on his back because of an injury, forcing him to shout his lines even more than in his other scenes, and restricting his movements drastically. Scenes with the ghost of his dead father also border on the hokey. But the play's racial, familial, and cultural themes give the play substance, even when the dialogue sounds a little clunky and the situations somewhat forced.


The play doesn’t take us past the beginning of Lee’s meteoric rise in Hong Kong films, and we are deprived of seeing him finally becoming a Hollywood star in movies like ENTER THE DRAGON, only for him to die at age 32.


There are some fine, enthusiastic performances from the supporting cast, including Peter Kim as the doofus student Tōshi and, in a sharp character turnaround, the Hollywood producer, William Dozier. There’s also a nice job by a child actor, Bradley Fong, who plays both the young Bruce Lee and Bruce’s own son, Brandon, who also died tragically young as his own career was beginning to soar.
KUNG FU is uneven drama, but much of it is engrossing theatre. Cole Horibe, while not a new Bruce Lee, gives a focused and efficient performance as the late star, and helps make the production eminently watchable. There are quite enough flying kicks and lightning fists to keep most audiences engrossed in the action, and the energetic cast keeps things humming even when the playwriting is taking its lumps. For all its flaws, I see the potential for an exciting movie in KUNG FU. Can you?
Posted by Samuel L. Leiter at 7:34 PM