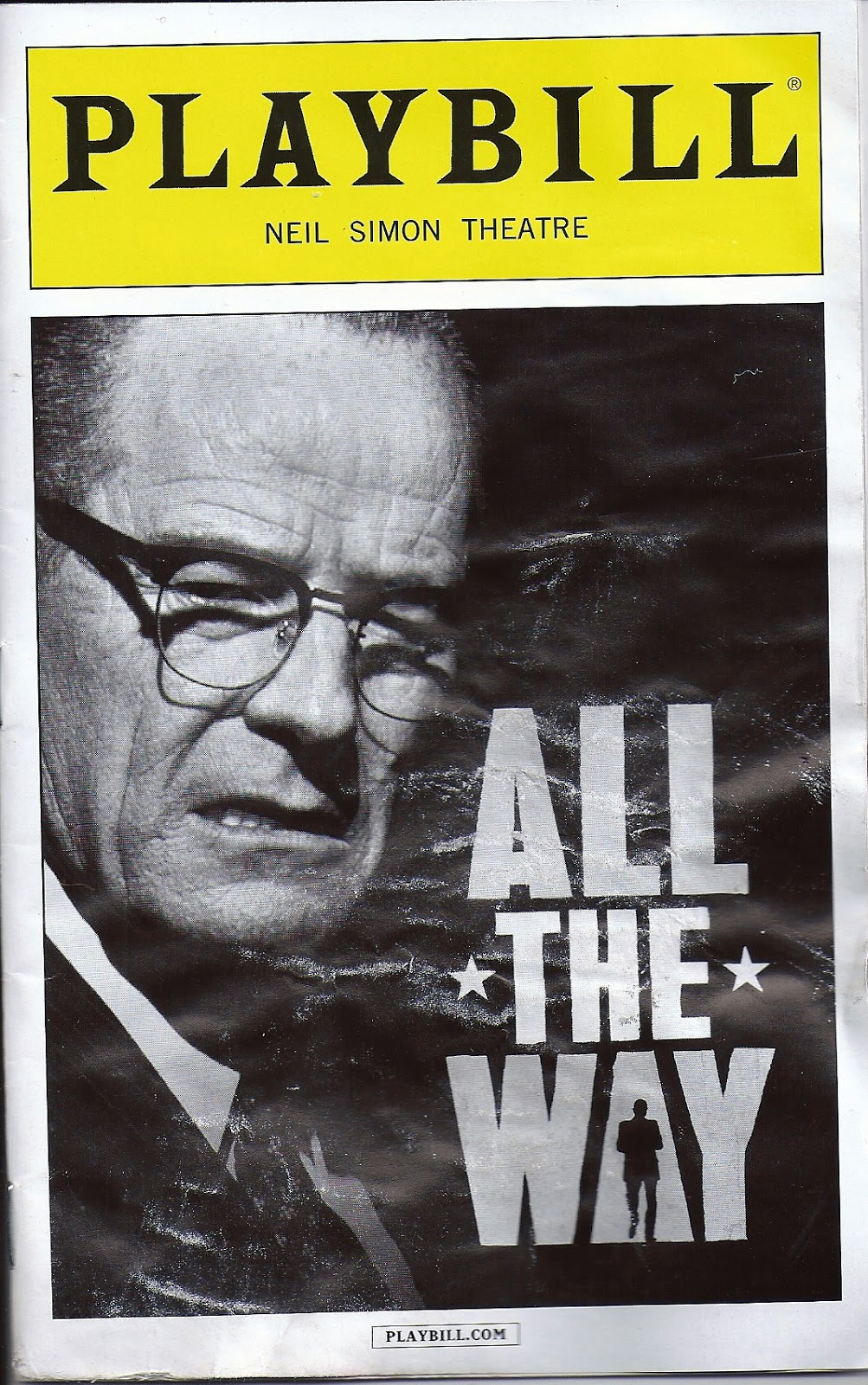 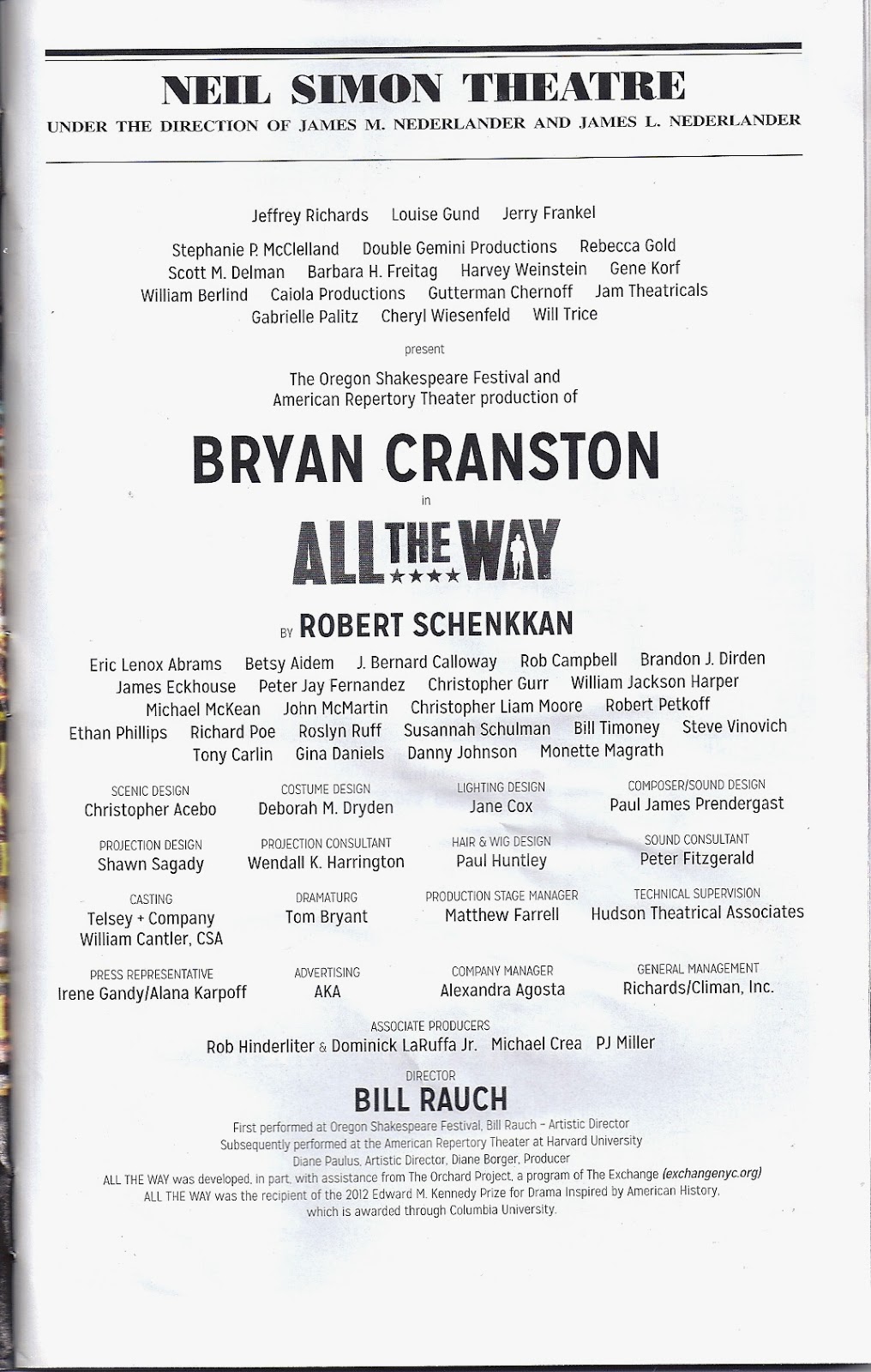 Full disclosure: much as I wish I had, I’ve never seen an episode of the hit TV show “Breaking Bad,” which made Bryan Cranston into a superstar, although I’ve seen him in a movie role or two. Mr. Cranston is now giving Broadway a look at his live acting chops in what has been widely hailed as a brilliant portrayal of President Lyndon Baines Johnson in Robert Schenkkan’s ALL THE WAY, at the Neil Simon Theatre (after a run at Cambridge’s American Repertory Theatre). Mr. Cranston is clearly a strong actor and holds the stage with dynamic energy for the greater part of the two hour 45 minute production; however, the nature of the writing and staging of a play that attempts to cover all the often devious political machinations behind Johnson’s ramming through his landmark 1964 Civil Rights bill require a kind of bravura performance that ultimately results more in appreciation of the actor’s commanding technique than full belief in the character he’s embodying. It’s the kind of role that requires a deep-fried Texas accent, a passel of identifiable gestures, and enough shouting to call the cattle home. He also uses prosthetic ears, high-waisted slacks, and two-inch heels (Johnson was 6 feet 3 inches tall). Many (not all, thankfully) of the actors on stage with Mr. Cranston are similarly big but, given the amount of detailed information being covered and the need to hold the audience’s interest for so long a time, it seems that anything more subtle might have stampeded the audience at intermission. 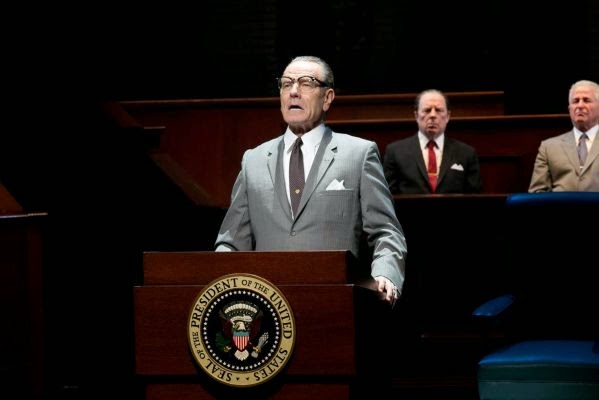 Bryan Cranston, Michael McKean, Stephen Vinovich. Photo: Evgenia Eliseeva.
The Broadway stage, unlike the movies, often has to exaggerate to get its points across. If you consider the recent movie, LINCOLN, about another president’s fight with Congress, you’ll see how often quiet scenes are balanced by more overtly dramatic ones. There are few quiet scenes in ALL THE WAY, and even when they do appear they’re quickly gobbled up by the next big crisis or diatribe. Still, despite its length and the amount of historical material one must digest, the play is often engrossing and its production impressive.


With JFK having been assassinated in November 1963, LBJ is his at first reluctant successor. He soon finds his bearing in determining how he’ll make his mark in the nation’s highest office. He’ll seek to pass a landmark Civil Rights bill, and also engage in a war on poverty. Meanwhile, the Vietnam War is heating up and, under prodding from Secretary of Defense Robert McNamara (James Eckhouse), serious decisions have to be made. The 1964 election looms less than a year away, and, as the action progresses, we see titles projected telling us of how many months are left, intensifying the pressure. Johnson, using (and abusing) Sen. Hubert Humphrey (Robert Petkoff) as his principal defender, is fighting to get his policies enacted as the clock ticks toward the Democratic convention and then the election itself (opposite Barry Goldwater), and he’s obstructed at every turn by the racist Southern Democrats, led by Rep. Richard Russell (a suitably unctuous John McMartin), and various black civil rights leaders, such as the Rev. Martin Luther King (Brandon J. Dirden, a pale reflection) and the fiery Stokely Carmichael (William Jackson Harper), each with their own agenda. The murders of young civil rights workers James Earl Chaney, Michael Goodman, and Andrew Schwerner in Mississippi create a crisis, and, among other tension-producing developments, there's the issue of J. Edgar Hoover’s (Michael McKean, nicely restrained) spying on civil rights activists and LBJ himself. (The relationship between Hoover’s surveillance and today’s NSA activities was the subject of a scathing attack just yesterday by Senator Rand Paul.)


There are occasional longeurs in this fact-filled drama, but there’s also enough life to sustain most of it. Still, so many of the once-familiar politicians taking part in the story are now forgotten that it seems only an audience of seniors with some knowledge of who these people were might find much interest here, although Mr. Schenkkan does his best to telegraph at least an idea of their importance. It’s always fun to learn more about what the people that run our country are like in private; Mr. Schenkkan offers a colorful picture of the big-eared 36th president that shows him as a volatile, foulmouthed leader, with a penchant for vulgar anecdotes that support his political points, yet we also see what a cunning operator he was, how capably he could twist people into doing his bidding by the sometimes sly, sometimes bullying way he handled his considerable powers, and how ruthless he could be to get his way.


Late in the play, LBJ directly addresses the audience about what they’ve been watching and asks, “Did it make you feel a little squeamish?” Only those who have their head in the clouds would not already know instinctively that this is how things work in the corridors of power; nevertheless, seeing it enacted before your eyes has a kick of its own. Making this particular X-ray of our recent political past even more disgusting is the depiction of the unapologetically prejudiced attitudes of our elected leaders only half a century ago, when Jim Crow still ruled the South.


ALL THE WAY is given a rather elaborate production under Bill Rauch’s smooth direction, with two dozen actors, many of them playing multiple roles. Deborah M. Dryden’s period costumes and Paul Huntley’s wigs do yeoman service in taking us back in time and differentiating one character from another. Christopher Acebo’s set resembles a semicircular Congressional arena of wooden desks, behind which a large screen allows for many still and video projections, excellently created by Shawn Sagady to establish the varying locations. The bulk of the action transpires in the well at center, often with Johnson at his desk speaking by phone to various politicos seated around him.


Things have changed a lot since 1964, in the South as well as elsewhere, but the parallels of 1964 with American life in 2014 can't be denied, whether it be issues of race, poverty, war, surveillance, backroom political deals, perceived sexual misconduct, and so on. ALL THE WAY (“with LBJ,” Johnson’s election slogan), reminds us of this in an episodic drama, part history lesson, part exposé, part biodrama. Despite its broadly depicted characters, often simplistic storytelling, considerable length, and occasional overacting, most theatergoers should be able to go a good deal of the way, if not all of it, with this one.
Posted by Samuel L. Leiter at 8:47 PM