In January 1980 novelist, critic, and journalist Mary McCarthy appeared on Dick Cavett’s PBS talk show and was asked by the host to cite who she felt were bad writers. After dismissing John Steinbeck and Pearl S. Buck, she zeroed in on famed playwright and memoirist Lillian Hellman, whose most important plays included THE CHILDREN’S HOUR, THE LITTLE FOXES, and WATCH ON THE RHINE. When asked why, McCarthy declared that Hellman was a “liar” and said that everything Hellman wrote was a falsehood, “including the words ‘and’ and ‘the.’” Hellman was so offended she immediately called her lawyer and told him to sue McCarthy. She refused Cavett’s offer to come on his show and rebut McCarthy’s claim. Hellman sued McCarthy for $2,225,000 in damages, not to mention suits filed against Cavett and Channel 13. The wealthy Hellman could afford to pursue her suit, but McCarthy, much less deep pocketed, was nearly bankrupted. The case was highly controversial because many considered it an attack on free speech, despite Hellman’s status as a liberal. 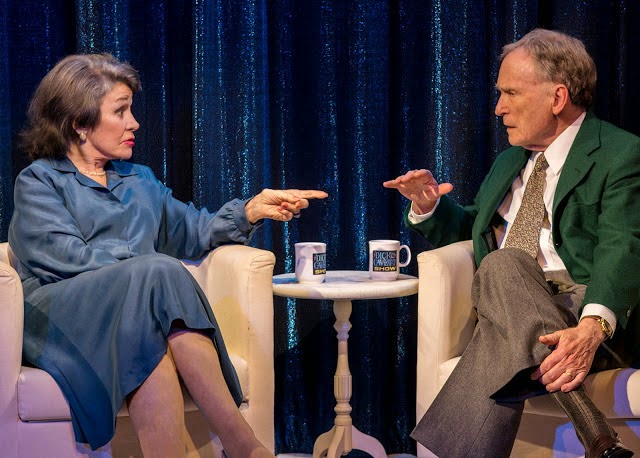 Marcia Rodd, Dick Cavett. Photo: Kim T. Sharp.
The 74-year-old Hellman, frail, and suffering from numerous ailments, was notorious for her temper and angry outbursts, not to mention her sailor’s vocabulary, while McCarthy was famous for her biting critical reviews. The women had a history of bad feeling, partly because of McCarthy’s displeasure (shared by many in the anti-Communist liberal intellectual community) with Hellman’s tacit support of the USSR and Stalinist practices. Cavett’s question to McCarthy ignited an explosive keg of ire that was only subdued when Hellman died, four years after initiating her law suit.


Brian Richard Mori has turned this fascinating feud into a viable 90-minute play, now at the Abingdon Theatre, fictionalizing certain aspects and even creating an encounter between Hellman and McCarthy. He’s changed the names of the lawyers involved (Joseph Rauh represented Hellman, for example, not someone called Lester Marshall), and added a gay male nurse, Ryan Hobbs (Rowan Michael Meyer) to be Hellman’s constant helpmate and provide not only some gay-oriented quips but to act as a backboard against which Hellman can lob cutting comments demonstrating her dismissive sarcasm. 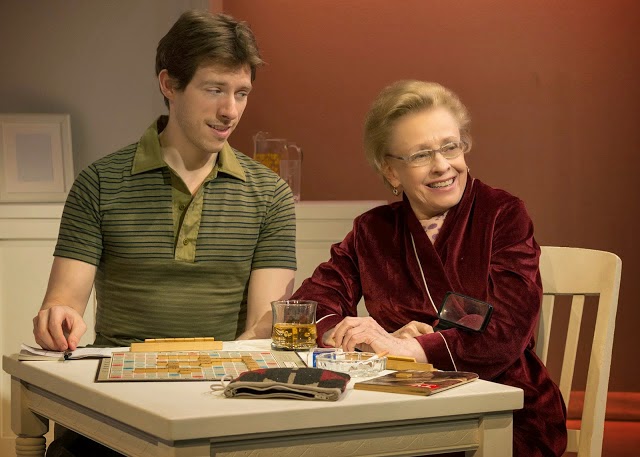 Rowan Michael Meyer, Roberta Maxwell. Photo: Kim T. Sharp.
A sleek and neutral set, designed by Andrew Lu, serves as the interior of Hellman’s home and, with a curtain drawn partway across the stage, as the TV studio; it allows the action to move inexorably forward, with the actual Dick Cavett, still hale at 78, playing himself as he was in the early 1980s and serving as a sort of interlocutor for today’s audience. (At the end of the play, he takes questions from the audience about the events enacted.) Roberta Maxwell, not far in age from Hellman’s when the events took place, is a suitable choice for Hellman, although Hellman in her 70s was far less pleasant looking and had a much raspier voice. (Ms. Maxwell was wearing a blue foot cast the night I saw the show; since she wore it throughout it seemed the result of a personal condition, not one belonging to Hellman.) Ms. Maxwell finds most of the unpleasant aspects of Hellman’s persona to play upon, and makes the character appropriately human and believable, but not as vitriolic as one imagines Hellman to have been. Hellman’s chain-smoking is only suggested, a necessary concession, perhaps, to Ms. Maxwell’s health, even with herbal or e-cigarettes. Marcia Rodd’s McCarthy is smart and attractive, and provides a convincingly worthy opponent in the writers’ war of words. 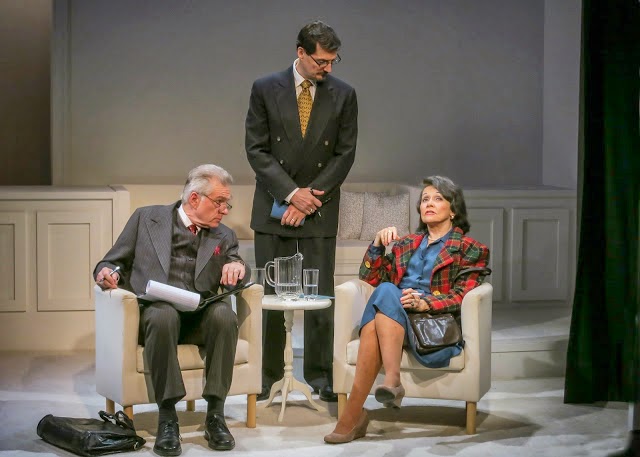 
The lawyers representing Hellman and McCarthy, played by Peter Brouwer and Jeff Woodman, are effective, but Mr. Meyers’s male nurse is a gay stereotype. Jan Buttram’s direction adds some nice touches to the TV studio opening, with cameramen and technicians creating the sense of an actual broadcast about to happen, but the slow pacing and lack of tension in many scenes must also be laid at her feet. Stronger direction might have given the play the tiger’s bite it often seemed to lack.


In general, HELLMAN VS. MCCARTHY is pretty faithful to the facts, especially as they’re presented in William Wright’s masterful Hellman biography, Lillian Hellman: The Image, The Woman, but the playwright goes a bit too far in conjuring up the scene between McCarthy and Hellman. This is, arguably, the most interesting part of the play, with McCarthy ostensibly visiting Hellman to apologize but finding herself engaged in a battle of spiteful invective instead. Only after it’s over does Mr. Cavett appear to tell us that the meeting never happened, deflating its impact. Of course, Schiller did the same thing in MARIA STUART, but the historical distance involved between his fictional scene between Queen Mary and Queen Elizabeth gave him some leeway; Mr. Mori’s events are too recent, and too well known (to some audience members, at least) to allow for similar liberties. If you know in advance the scene is fictional, you sit through it waiting to see if it’s acknowledged.


There’s also insufficient information provided to justify McCarthy’s charges. A cottage industry of fact-checkers grew up while the law case was in progress detailing all the misrepresentations of the truth in Hellman’s writings, but only a passing bit about the questions raised by her famous story about the woman named Julia is introduced, leaving the audience unsure of the validity of McCarthy’s accusations. Even a program note would be useful.


Still, the feud makes for compelling drama, the characters are vivid enough to hold our attention, and the play, for all my reservations, is worthy of consideration.
Posted by Samuel L. Leiter at 7:57 AM