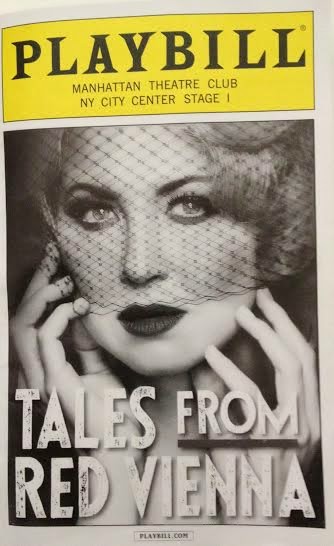 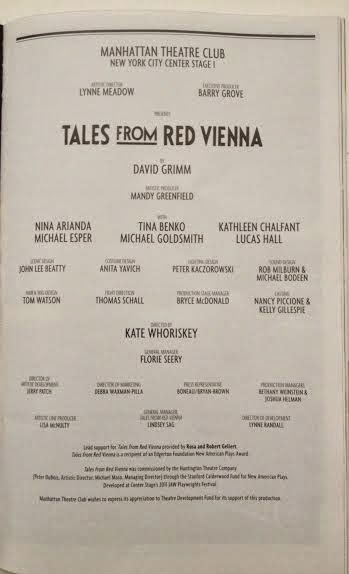 The knowledge that Nina Arianda, so brilliant in VENUS IN FURS (which I saw) and BORN YESTERDAY (which I missed), was starring in David Grimm’s new play, TALES FROM RED VIENNA, at the Manhattan Theatre Club’s City Center Stage 1, was made even more exciting by the show’s alluring publicity photo of her in a widow’s veil. Unfortunately, the photo is far more glamorous than the role she plays in this disappointing drama set in 1920 Vienna, where Ms. Arianda’s character, Heléna Altman, an aristocrat whose husband, Karl Hupka, was reported killed at Ypres during World War II, is forced to turn to prostitution to survive. The wordless first scene of the play, which takes place behind a sheer, dark curtain in the threadbare apartment she’s been forced to move to with her elderly, commonsense housekeeper, Edda Schmidt (Kathleen Chalfant), shows her clearly reluctant encounter on a tabletop with a bearded client. This gent will turn out to be Béla Hoyos (Michael Esper), a young Hungarian journalist and acquaintance of a more fortunate aristocratic woman, the snooty gossip Mutzi von Fessendorf (Tina Benko), who is herself in an unhappy marriage. Later, when Béla learns who Heléna is, he becomes her conflicted suitor (one who, because of the social rot he partly represents, gives her a snort of cocaine). Béla, a committed Marxist socialist, also represents the contemporary political regime, which was briefly under the control of the social democrats, thus giving the play the color in its title, and which deprived aristocrats like Mutzi of their former status. It's too bad that the political background of the play remains just that, background.


TALES FROM RED VIENNA, flatly staged by Kate Whoriskey, appears at first to be an historical drama exposing the social corruption in Austria’s postwar society, when numerous newly impoverished women, many from the middle and upper classes, found themselves in Heléna’s predicament; it isn’t long before it goes off track and becomes conventional romantic wiener schnitzel, with a dramatic twist at the end of Act Two signaled by the arrival of the mysterious Karl Hupka (Lucas Hall). This ultimately turns the three-act play (remember them?) into a variation on A DOLL’S HOUSE, except that it’s not the woman who walks out the door at the end.


Some topicality--the theme of anti-Semitism--is introduced by Rudy Zuckermayer (overacted by Michael Goldsmith), a Jewish boy infatuated with Heléna, while an attempt at comedy is provided by Edda, the wise old housekeeper, some of whose would-be laughs stem from her fondness for a nip or two, others from anachronistic cracks like, “Now you’ve given him a stiffy.” Ms. Chalfant, normally one of New York’s most dependable character actresses, is unable to make a real person out of the role; for one thing, she wears even more makeup than Ms. Arianda.


Very little rings true, either in the acting (Ms. Benko comes closest), the dialogue, or the characters, and the old-fashioned plot development that justifies Act Three is highly questionable. The sense of period authenticity is limited to the snatches of Viennese waltzes we hear (courtesy of sound designers Rob Milburn and Michael Bodeen), Anita Yavich’s lovely costumes (although the impoverished Helena and Edda wear clothes that are far too neat and fine looking), and John Lee Beatty’s two sets, one showing Heléna’s living room, and one the cemetery where, implausibly, Heléna spends Act Two, near the grave of her husband. Neither is up to Mr. Beatty’s usual standard (as is, for example, his just-opened MOTHERS AND SONS).


By the time the play has run its course after two and a half hours, so has our patience with TALES FROM RED VIENNA, a stale piece of strudel from playwright Grimm.
Posted by Samuel L. Leiter at 8:53 PM