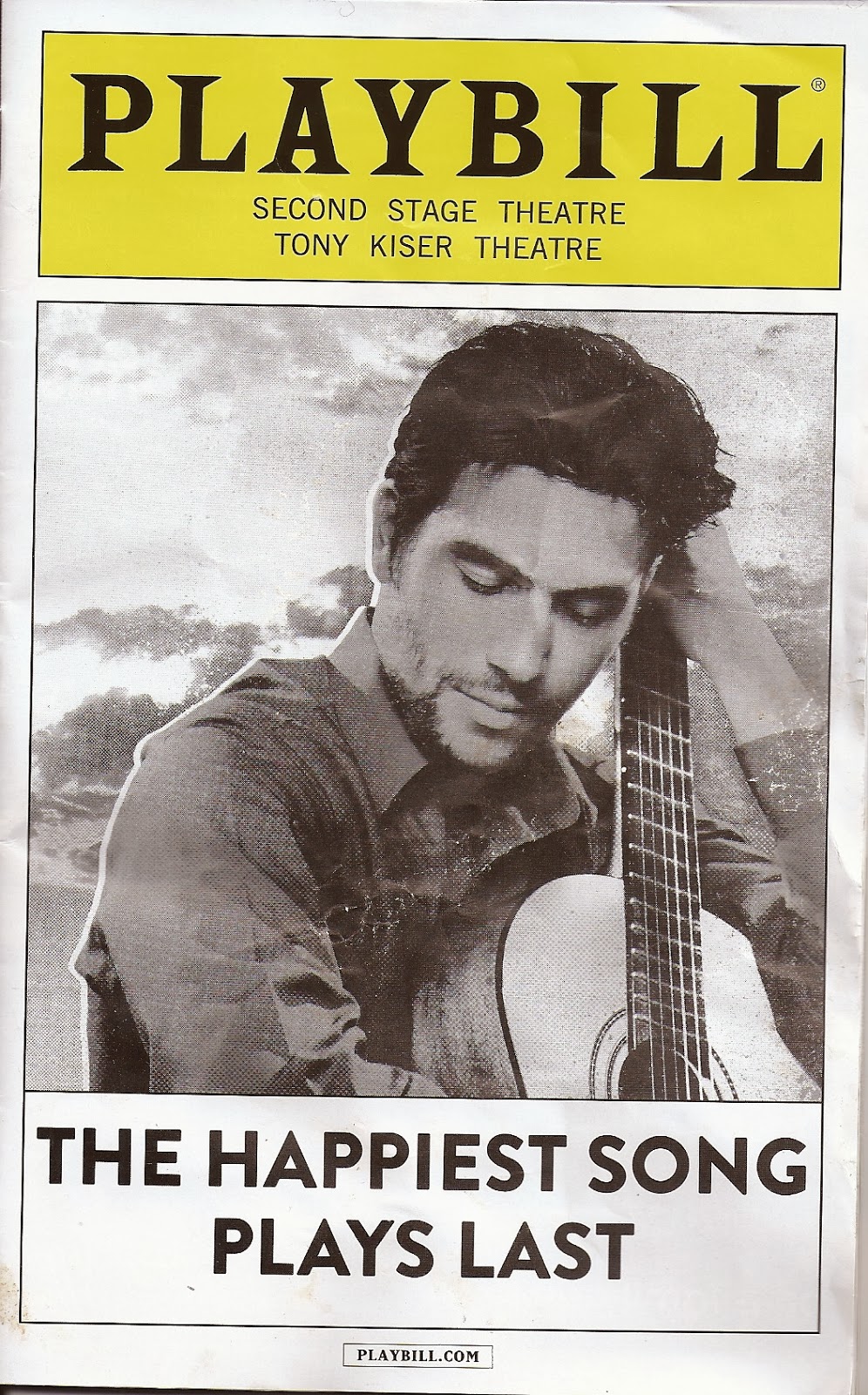 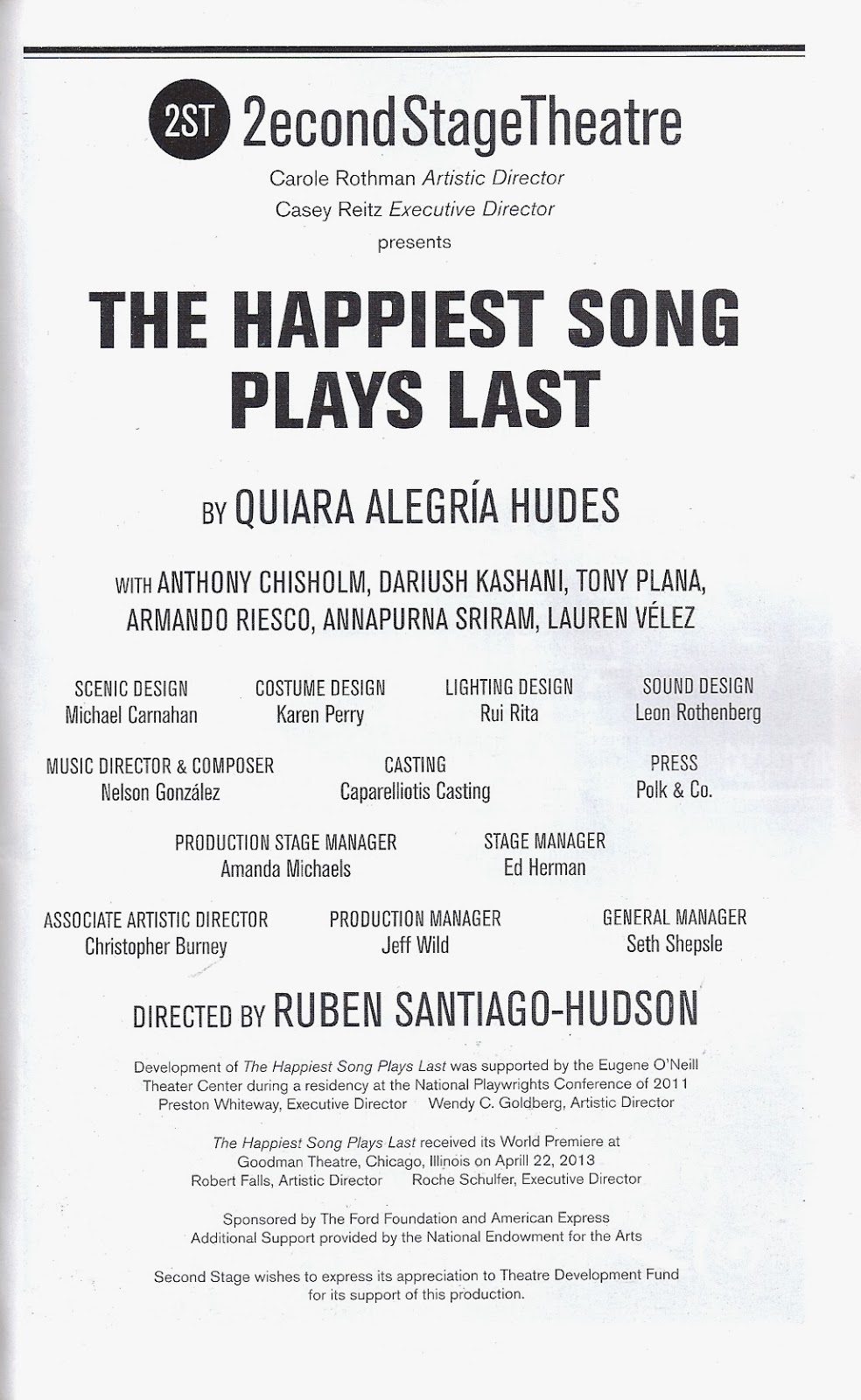 THE HAPPIEST SONG PLAYS LAST is the final play in a trilogy by Quiara Alegria Hudes that began in 2006 with ELLIOT: A SOLDIER’S FUGUE, and continued last season with the Pulitzer Prize-winning A SPOONFUL OF WATER. It's playing in a fine production directed by Ruben Santiago-Hudson at the Second Stage, starring Armando Riesco as Elliot Ortiz, a Marine veteran of the Iraq war, a role he played in each of the other plays. Costarring as his cousin Yaz is Laurén Velez, probably best known as Maria LaGuerta on the TV series “Dexter.” 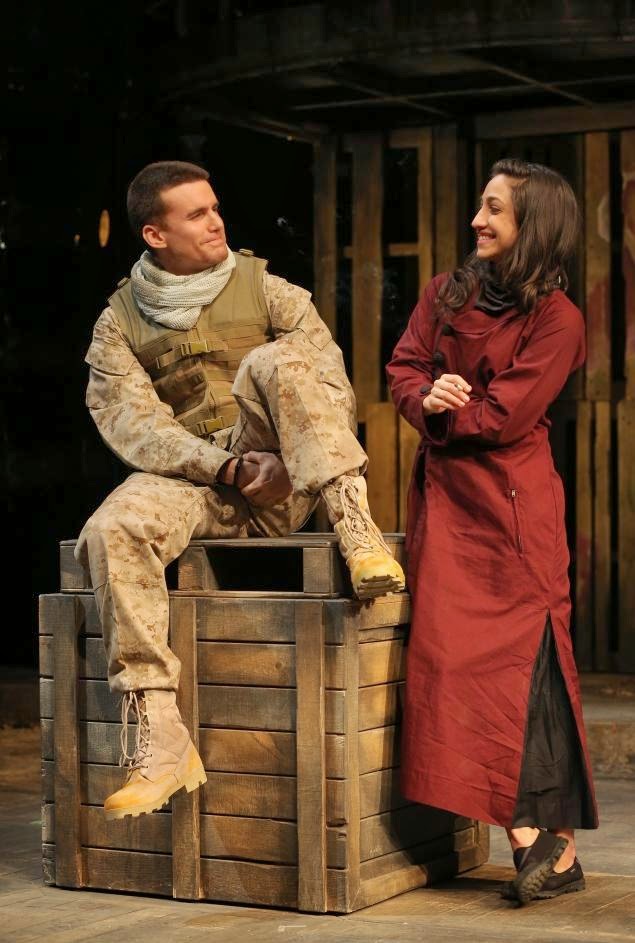 The action is split into two stories that come together and separate through the use of Skype conversations. Backing the action is an attractive set mainly consisting of a high wall of wooden planking and windows, with a flower-adorned staircase leading to a large balcony on which a small band intermittently plays delightful Puerto Rican Jibaro music under the leadership of composer Nelson Gonzalez. The play, though, is not a musical, and the setting, redolent of Puerto Rico, serves instead as a background for action occurring in Jordan, mostly at stage right, and South Philadelphia, mostly at stage left.


The scenes in Jordan show Elliot at work as a military adviser on a movie taking place in Iraq, where he falls in love with Shar (Annapurna Sriram), an actress of mixed, mainly Middle-Eastern (including part Egyptian) ancestry, and befriends the film’s well-educated driver, Ali (Dariush Kashani), an Iraqi refugee. When the movie’s star is forced to leave the production, Elliot gets his big break when he’s asked to take over the actor’s part. “Two countries away” is Egypt, where the 2011 Arab Spring revolt against Mubarek is unfolding. Elliot’s drama concerns his convincing the reluctant Ali and Shar to accompany him to Egypt, where he can witness firsthand the revolution in Tahrir Square, and his use of Ali to help him resolve his deep-seated guilt in having killed an innocent Iraqi civilian during the war.
Laurén Velez, Tony Plana. Photo: Joan Marcus.


The Philadelphia scenes involve Yaz, a music professor who has abandoned her nice high-rise pad to move to a shabby neighborhood where she can serve the needs of the community, who come to her for food and advice. Among them is a homeless black man, Lefty (Anthony Chisholm), who is preoccupied with serving as a self-appointed traffic guard because he was so devastated when a child was run over by a car. Also close to Yaz is Agustin (Tony Plana), a boozy, married musician of Puerto Rican music toward whom the supposedly much younger (Ms. Velez is actually 50) is attracted.


The plot of THE HAPPIEST SONG PLAYS LAST runs along two parallel lines that barely come together, except when Yaz and Elliot use Skype to talk, and when he visits her in Philadelphia with Shar. The characters are all well meaning and excellently acted, but the play meanders along without much actually happening, lost in conversation and character relationships as Elliot and Yaz find whatever it is that they’ve been searching for to make their lives meaningful. There also are unnecessary plot detours, such as Yaz’s advocating for a hospital boycott in the wake of a tragedy. The lack of anything particularly compelling to focus on becomes a boredom inducer, and as the too-talky play finally slumps to its conclusion you wait impatiently for that happiest song to play.
Posted by Samuel L. Leiter at 12:38 PM