238. THE BRIDGES OF MADISON COUNTY 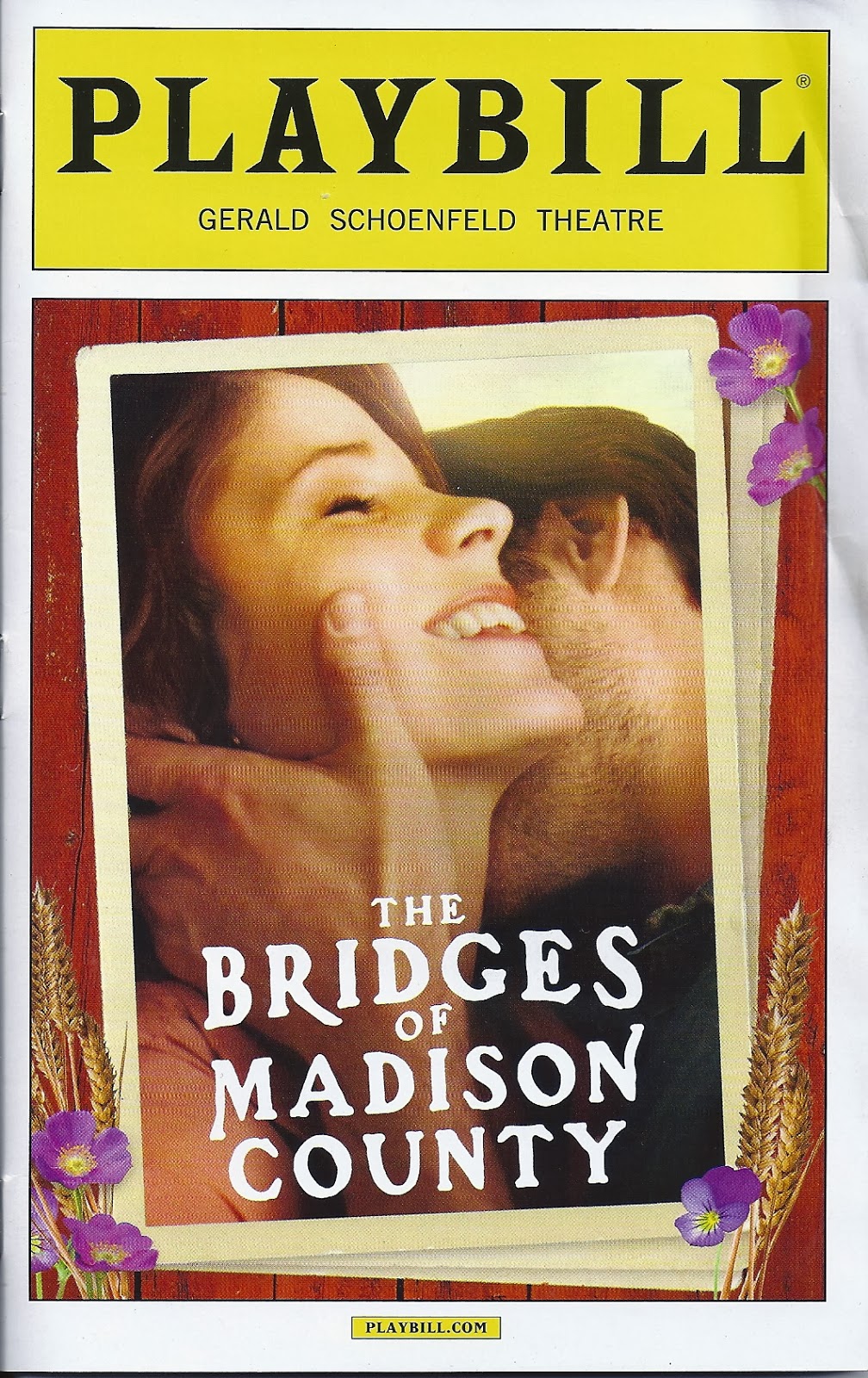 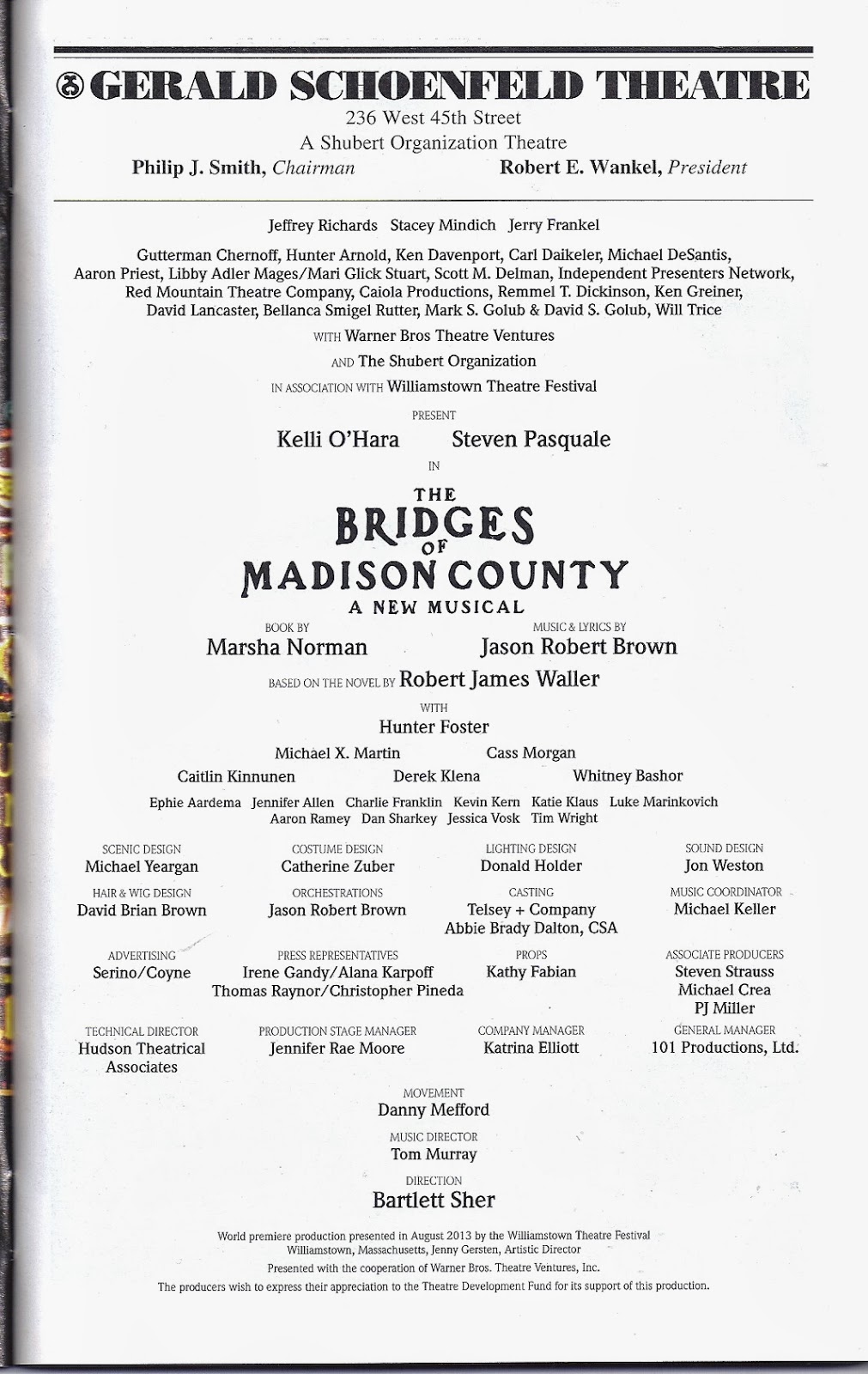 The year is 1965, the place a farm in Winterset, Madison County, Iowa, in the midst of the nation’s Corn Belt. A still attractive, lightly accented, Italian war bride, Francesca (Kelli O’Hara), lives there with her farmer husband, Bud Johnson (Hunter Foster), and two teenage kids, Carolyn (Caitlin Kinnunen) and Michael (Derek Klena). Bud and the kids drive off to spend a week at the Indiana State Fair where Carolyn’s steer, Stevie, will be entered in a state competition. No sooner are they gone than Robert (Steven Pasquale), a hunkily handsome, gently appealing, top-flight photographer for National Geographic, stops by the farmhouse to ask directions to one of the seven local covered bridges he’s been asked to shoot for a photo spread. Instantly intrigued, Francesca, whose loneliness and sense of alienation in the boring open spaces of Iowa needs just this inducement, offers to give him directions. They drive off in his truck, come back to the house, prepare dinner together, and gradually fall in love. As the week passes and they become lusty lovers, Bud deals with the sibling rivalry of his kids, with Michael’s growing rebelliousness, and with the increasingly distant tone of Francesca’s voice whenever he calls. Meanwhile, friendly neighbors, Marge (Cass Morgan) and Charlie (Michael X. Martin), suspect hanky-panky in Francesca’s house. Finally, Bud and the kids come home as Robert wraps up his assignment and prepares go home to New York. Will Francesca leave her family and run off with him? 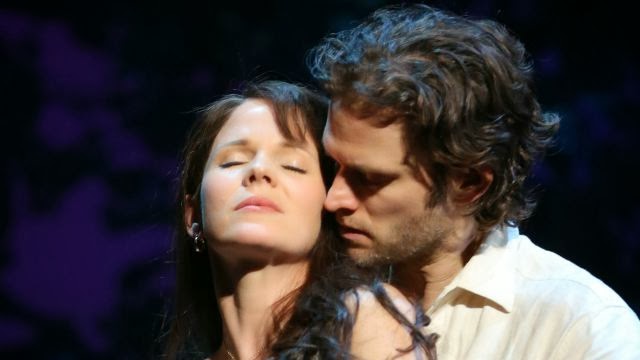 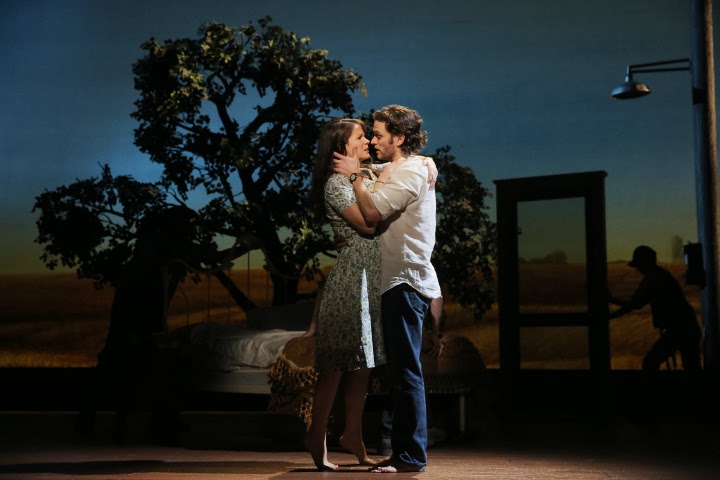 This simple love story of a conventional housewife’s passionate but impossible life-changing, one-week romance with the perfect stranger, originally told in Robert James Waller’s 1992 enormously popular best-selling novel, and later made into a 1995 movie starring Meryl Streep and Clint Eastwood, has now been blown out of proportion into a Broadway musical directed by Bartlett Sher with a book by Marsha Norman and music and lyrics by Jason Robert Brown; the result is an overlong, overly sentimental bathroom read of a show. This is not to detract from the fine performances of the good-looking, highly talented, big-throated stars, who give their all in the struggle to make something at times almost semi-operatic out of a paper thin, completely implausible, schmaltzy love story, the kind that keeps Harlequin romances popular, albeit on a slightly higher literary level. To emphasize the romantic illusion (while, unfortunately, diminishing the last-chance-for-love perspective), both leading roles have been cast with actors younger than those in the original, and Ms. O’Hara, whose accent is consistent but not convincing, seems more like the corn-fed natives of the Hawkeye state than someone from the mean streets of Naples (Sophia Loren’s home town).


The book intertwines Bud and his kids’ week at the fair with Francesca and Robert’s sinful sojourn in bed and bath, and then moves several years into the future, when the kids have grown and Bud has died. The sentiment comes pouring out like syrup as the show nears its conclusion when, after we learn of Robert’s fate, the show concludes with what surely is hoped will wrench floods of tears from theatergoers as . . . well, if you haven’t read the book or seen the film, but are really interested, you’ll go to the Schoenfeld Theatre and find out for yourself. Be prepared, though, for an ending that differs somewhat from that in the book.


Perhaps THE BRIDGES OF MADISON COUNTY might have worked better if half an hour had been lopped off, or if it had been produced at one of New York’s quality Off Broadway nonprofit theatres, like Second Stage or Playwrights Horizons. Seeing it given the full treatment of Michael Yeargan’s flying and sliding scenic units against a huge expanse of Iowa farm country, with a large tree upstage, only underlines the shallowness of the material. This is a non-dance musical, with only the choreography of actors rolling scenery and furniture into place offering a sense of musical movement (credited to Danny Mefford), so the burden falls mainly on Robert Jason Brown’s music.


The show begins with a promising prologue song of sorts, “To Build a Home,” sung gloriously by Ms. O’Hara, but only sporadically reaches similar heights as the story progresses. Much of the music is of the literal tell-the-story type, and even the big 11:00 duet between Francesca and Robert, “Before and After You/One Second & a Million Miles,” has a pseudo-soaring effect that never fully registers emotionally, for all the passion invested in it by Ms. O’Hara and Mr. Pasquale. There are, though, several musical delights, such as “Another Life,” a Joni Mitchell-like tune sung by Robert’s ex-wife, Marian (Whitney Bashor); “Get Closer,” a doo-wop pastiche sung by neighbor Marge, who harbors an itch of her own; and a gospel number, “When I’m Gone,” performed by Charlie, Bud, and the company at the time of Bud’s demise.


Most of Catherine Zuber’s costumes look right without drawing too much attention to themselves, but several outfits appear slightly out of period. For me, the standout design element is Donald Holder’s exquisitely romantic lighting; I especially appreciated the effect of the light changing on the scenic background and covered bridge (cleverly created by rectangular arches that fly in from above) whenever it appeared.


Although the couple seated next to me failed to return for the second act, forfeiting the hefty price of down front orchestra seats, there surely is an audience for THE BRIDGES OF MADISON COUNTY. Only time will tell whether there’s enough of one to sustain a successful run.
Posted by Samuel L. Leiter at 8:16 PM