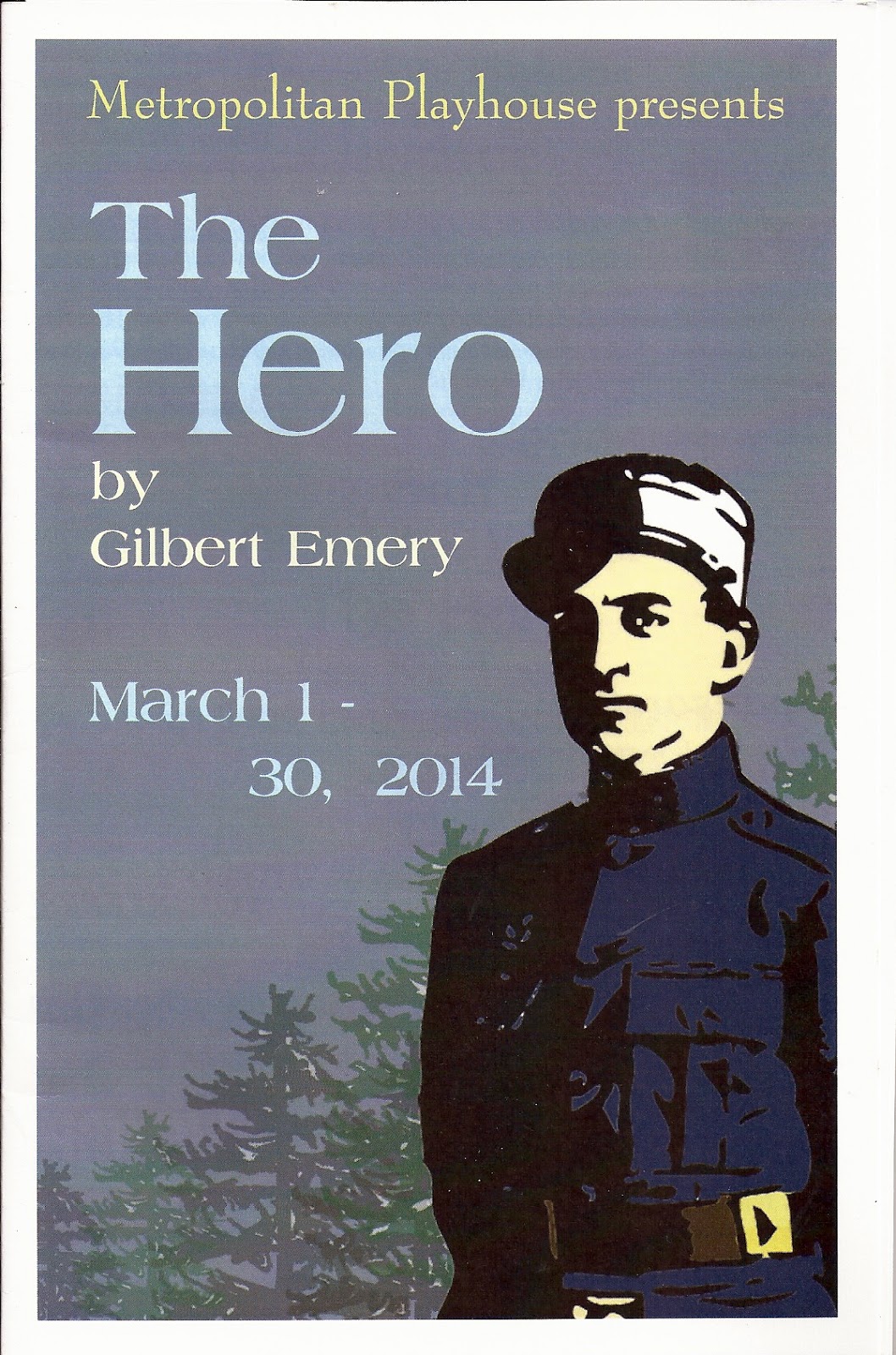 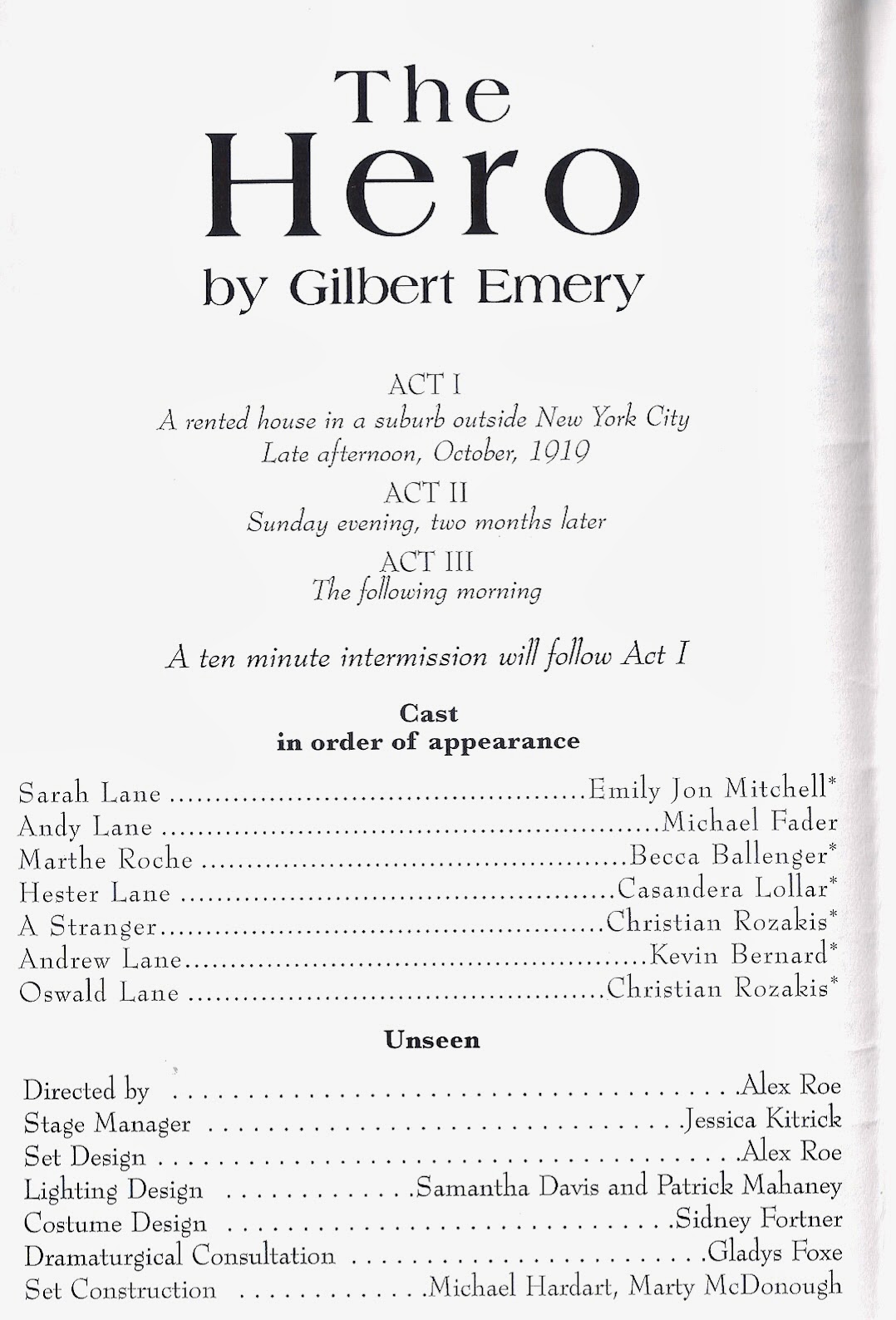 Alex Roe’s enterprising little Metropolitan Playhouse on E. 4th Street in Alphabet City, which is given to rediscovering forgotten American plays, usually picks pre-20th-century works; with THE HERO, by Gilbert Emery (better known as short story writer Emery Pottle), it has chosen a play closer in time. THE HERO opened at the Belmont Theatre on September 5, 1921, and ran for 80 performances, making it a commercial failure but not preventing it from being selected by Burns Mantle for inclusion as one of the ten best plays of 1921-1922. Plays on that year’s list that still see occasional revivals include O’Neill’s ANNA CHRISTIE, Andreyev’s HE WHO GETS SLAPPED, and Maugham’s THE CIRCLE, but, like THE HERO, most of the rest have faded from memory, except among buffs.  In my Encyclopedia of the New York Stage: 1920-1930 I wrote about THE HERO’s first production thusly [names in brackets are those of actors in the Metropolitan production]:


THE HERO was first produced as a matinee-only production [at the Longacre Theatre] but several months later returned in a regular mounting at the Belmont Theatre and became a success d’éstime, its original leading player [in the role of Andrew] being replaced by Richard Bennett [a major star of the time, father of the movie actresses Joan and Constance Bennett]. Alexander Woollcott was only one of many who urged his readers to see this ironic work that explored the question of what true heroism is.


During the war [World War I] n’er-do-well brother Oswald [Christian Rozakis] apparently redeemed himself by a career of valiant heroics in the Foreign Legion. Brother Andrew [Kevin Bernard] stayed home, struggling to care for his family, despite a small income. Welcomed home as the conquering hero, Oswald soon seduces Marthe [Becca Ballenger], the refugee Belgian maid, and attempts the same with his doting sister-in-law Hester [Casandera Lollar]. Finally, he dies before he can run off with the church funds he has stolen, having performed a final courageous act in saving a child from a kindergarten fire. Yet no one, no matter what he has done, condemns his previous acts of dishonesty or immorality. Which brother, the play asks, is the true hero—the morally or the physically brave one?


This plot, said Heywood Broun, was superficially old-fashioned but was raised to artistic heights by Emery’s dramatic insights.


THE HERO does, indeed, creak like an old-fashioned play at times, especially with its rushed final minutes when so many dramatic threads are quickly woven together, but it does warrant revival and consideration as a thoughtful treatment of the problem set by the playwright. As we walked toward the subway, my companion was buzzing with reactions to Mr. Emery’s perceptions. Mantle observed that the Great War was, perhaps, too recent, and that more time was needed before its ideas could be appreciated without the still warm sentiment accorded to war heroes. Have we changed our attitudes toward returning soldiers, or, indeed, toward anyone involved in major catastrophes? Do we not, perhaps even more than ever, instantly label someone a hero just because they died or were injured while doing their job in some horrific event, especially one with political overtones? 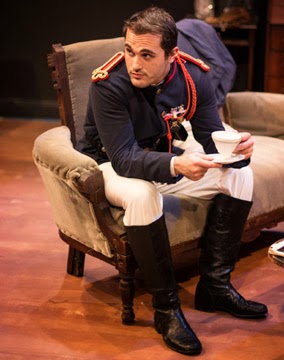 The Metropolitan’s production, directed by Mr. Roe, who also designed the simple set, is restrained and rather quiet, sometimes too quiet as when the younger actresses mumble. The venue’s upstage wall, which has served in many recent shows, has been removed so that a staircase could be installed, and the three-quarters round performance space includes furniture that allows the single set to be both the dining room and sitting room called for by the script. Despite the low budget, Sidney Fortner’s costumes adequately capture the world of a post-World War I lower-middle class family.


The lack of histrionics among the actors is welcome, and helps to underscore the subtextual feelings, but the production, which runs two hours and ten minutes with one intermission, eventually tends to drag and there are too many moments where cues could be picked up more briskly and the pace quickened. Ms. Mitchell’s portrayal of the nagging Sarah is perhaps the most believable and true to the period, while Mr. Bernard comes close as the unsophisticated insurance salesman brother, with his habit of snapping his fingers that so annoys his wife. As the good-looking but caddish brother, Mr. Rozakis looks right, but he runs a bit short in the charisma department. Ms. Lollar is suitably cast as the mother who’s guilty of allowing the thought of her brother-in-law’s corrupt intentions to affect her, but Ms. Ballenger’s maid, and her impenetrable accent, is out of tune with the ensemble.


A nod is in order to the Metropolitan Playhouse for its valiant efforts to restore forgotten plays like THE HERO to the New York stage. It is the true hero behind this production.
Posted by Samuel L. Leiter at 8:53 PM