237. THE ARCHITECTURE OF BECOMING 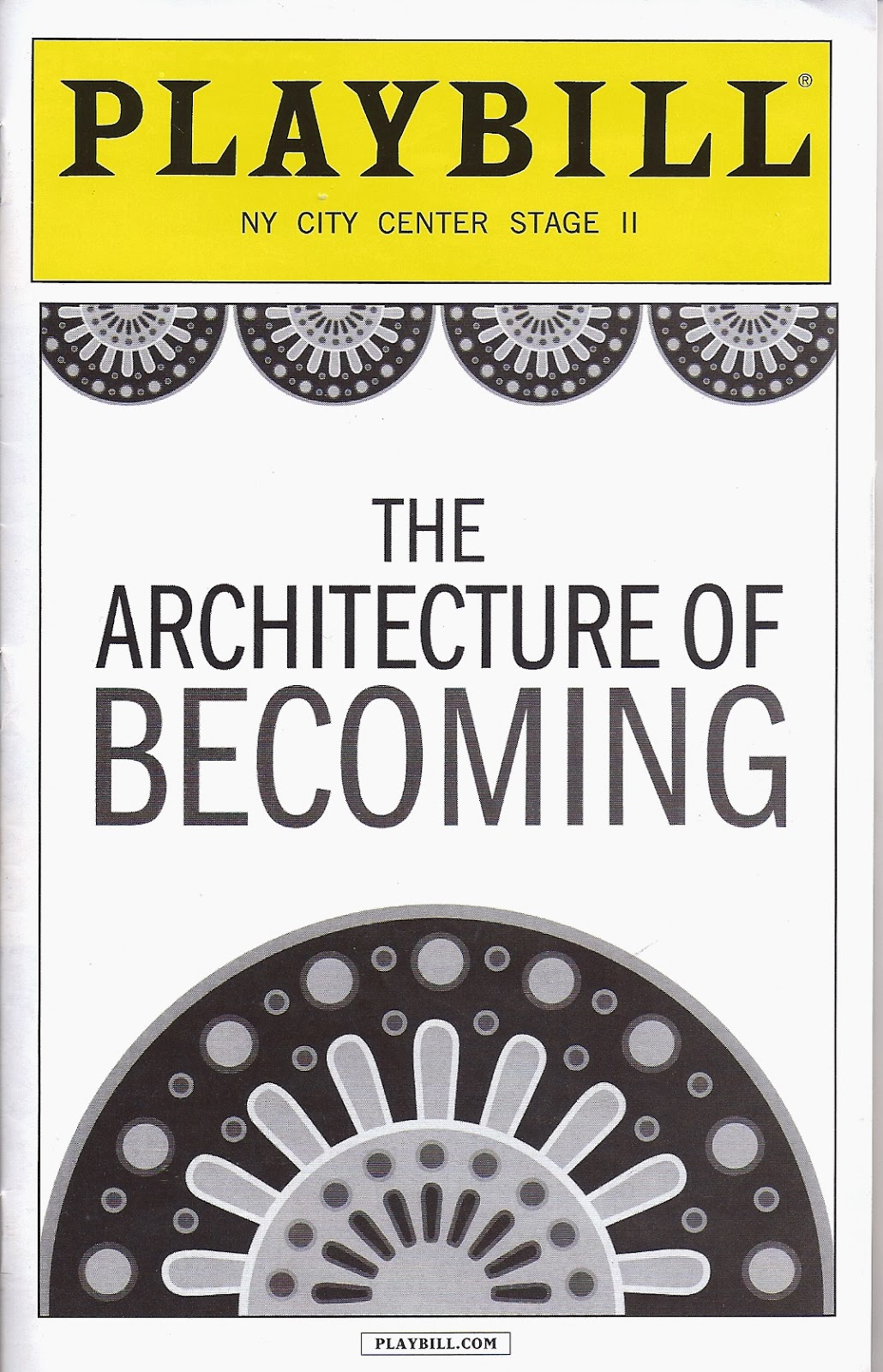 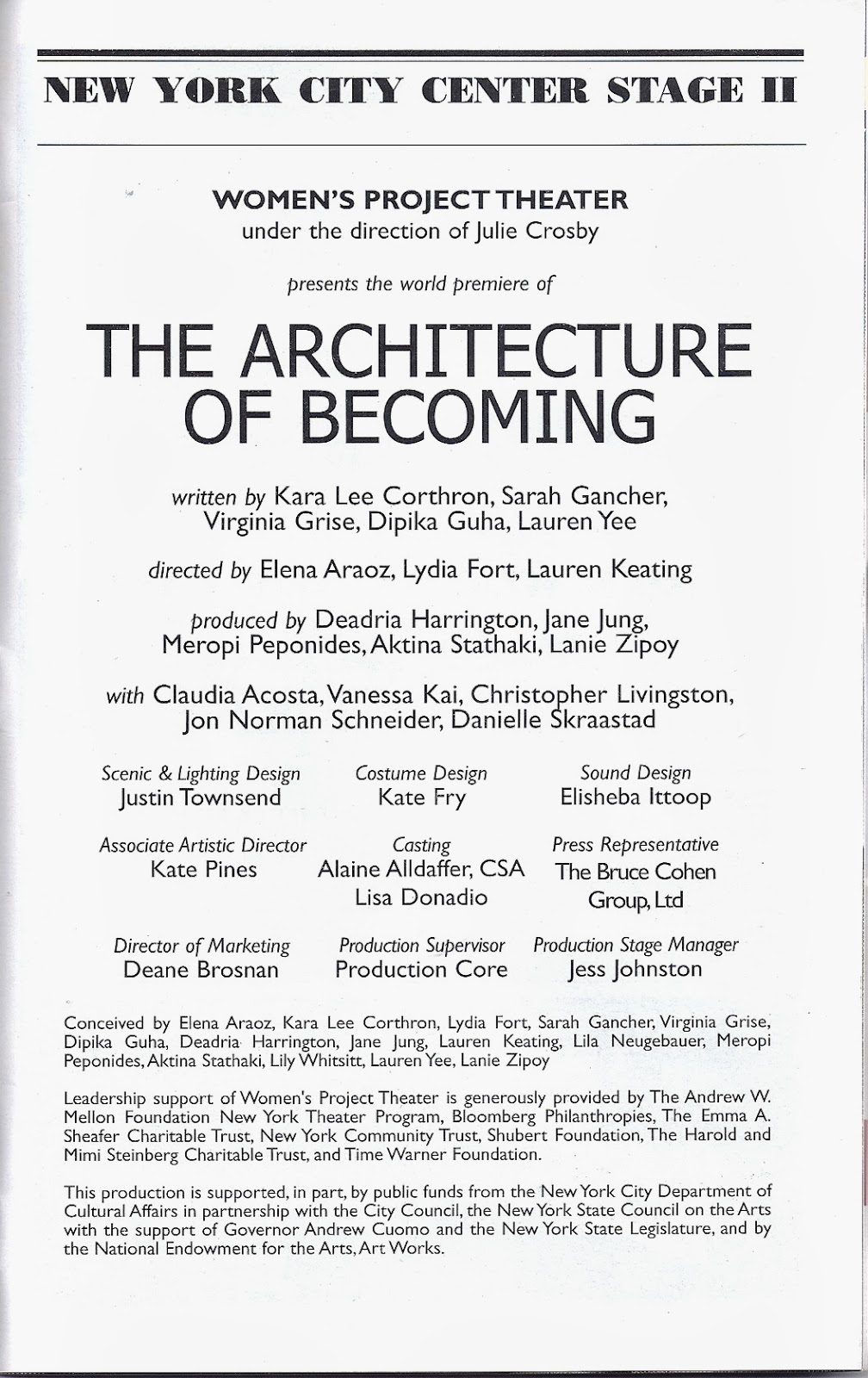 The press release for this multi-authored, multi-directed Women’s Project Theatre piece at City Center reads: “The 15 hottest theater artists in NYC bring you this evocative theatrical tapestry. A lost postcard, the ghost of an opera diva and the siren call of the City. Erupting from the shadows of New York City Center, expect history and mystery in this world premiere production.” For many, this is likely to be the clearest explanation of the weirdly static, often incomprehensible, and dramatically baffling exercise titled THE ARCHITECTURE OF BECOMING. The writers are Kara Lee Corthron, Sarah Gancher, Virginia Grise, Dipika Guha, and Lauren Yee. Elean Araoz, Lydia Fort, and Lauren Keating are the directors. I count six producers and six actors (Claudia Acosta, Danielle Skraastad, Jon Norman Schneider, Christopher Livingston, and Vanessa Kai), so I’m not sure how the total of 15 is arrived at, but then again, I’m not sure about anything else concerning this too-many-cooks-spoil-the-broth concoction, and I don’t really care that much. 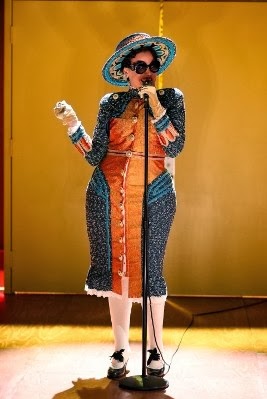 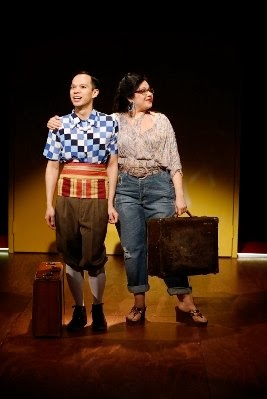 Jon Norman Schneider, Claudia Acosta. Photo: Carol Rosegg.
All I could think of while watching it were the words of Emperor Hirohito in his famous broadcast following Japan’s defeat in World War II when he asked the Japanese people to be ready for “enduring the unendurable and suffering what is unsufferable [sic].” As I looked around the theatre from my seat at one side of the three-quarters round setting, I saw a number of people following the emperor’s advice by resorting to 40 winks. 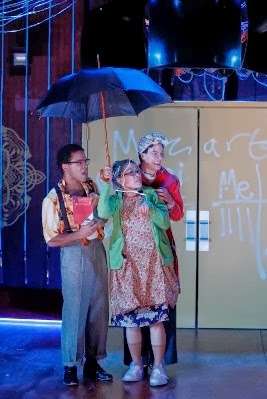 
If you think that this production is going to be a dramatized history of the New York City Center, the huge, neo-Moorish performing arts complex on W. 55th Street (opened in1924), in the bowels of which (Stage II) it’s being shown, you’ll be about 10% correct, as there’s enough historical information embedded in the text to warrant such an assessment. (Read the Wikipedia article on it if you want the other 90%.) Most of it, however, is so overlaid with peculiar and extraneous stories about Asian, gay (male and female), and black characters peripherally related to the building over the course of its history, that you quickly forget the theatre and struggle to puzzle out who these people are and what they mean.


The premise is that a Hispanic writer from Texas named Siempre Norteada  (Claudia Acosta) wants to write something about the City Center; a bizarre woman with oversize hips, the Grande Dame (Danielle Skraastad), wearing a costume seemingly composed of Moorish elements lifted from the theatre’s architecture, magically appears. Speaking in a New York accent and tone not unlike Mae West’s, she opens the upstage doors on designer Justin Townsend’s spare stage to introduce characters and stories that will inspire the writer.


Aside from a few moments of potentially interesting theatricality, and extensive sequences from the old silent movie, THE SHEIK, starring Rudolph Valentino, you soon give up and either take a snooze or find some other way to endure the unendurable.
Posted by Samuel L. Leiter at 8:18 PM