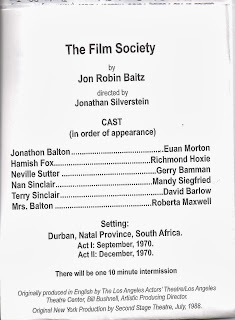 When you enter the Clurman Theatre for the Keen Company’s thoughtful if uninspired revival of Jon Robin Baitz’s 1988 THE FILM SOCIETY you see the stage’s wide open space cleared from side wall to side wall by designer Steven C. Kemp to allow for three simultaneously present acting areas: slightly raised platforms at right and left representing separate interiors, and an open space at center with a large desk, standing in for classrooms or office space as needed. The back wall carries the symbolic image that dominates the action, a huge, seriously distressed remnant of the wide cross and X bars that form the familiar image of the Union Jack; fragments of African patterns are pasted to it here and there like faded billboard ads. The play performed before this evocative set suggests the endangered empire of 1970 South Africa; apartheid is still the law of the land but white colonial society is feeling increasingly insecure and desperate to retain its prerogatives in the wake of growing black unrest. 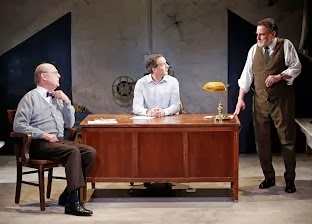 From left: Gerry Bamman, Euan Morton, Richmond Hoxie. Photo: Carol Rosegg.
The microcosm reflecting the dilemma is the Blenheim School, in Durban, Natal Province, where the Afrikaner boys of privilege continue to be educated in the traditional British public school manner, including the practice of caning to punish infractions. The school’s declining infrastructure, however, is most vividly described in regards to the disgusting smell and physical conditions of the rest rooms. The headmaster, Neville Sutter (Gerry Bamman), is losing his sight and needs an operation, and a cantankerous teacher named Hamish Fox (Richmond Hoxie) has spinal cancer. Something is rotten in the province of Natal. Within this troublesome place, Neville is worried about endowments and enrollments, and, despite a generally avuncular manner, is ready to fire anyone who upsets the apple cart by doing anything political that might be problematic for the school.


The central character is Jonathon Balton (Euan Morton), a 40-ish teacher who loves to show innocuous commercial movies to his weekly Film Society club (he’s upset when a print of Orson Welle’s nourish A TOUCH OF EVIL arrives instead of A TOUCH OF MINK, starring Doris Day), but, because of cutbacks, accepts the restriction of showing only educational films on a reduced schedule. He and another teacher, Terry Sinclair (David Barlow), are close friends who both were Blenheim students; Terry’s wife, Nan (Mandy Siegfried), also teaches at Blenheim. Jonathon and Terry are the offspring of gentlemen farmers, a class whose future is threatened by the nation’s problems. Jonathon seeks to find a way of supporting the school with a combination of liberal and conservative ideas, even in the face of apartheid, but Terry is unapologetically leftwing. When his activism gets him fired, he is unable to find another suitable position. Meanwhile, Jonathon, who already has been promoted to assistant headmaster, becomes the new headmaster when his wealthy, conniving mother, Mrs. Balton (Roberta Maxwell), agrees to provide the school with a major endowment if Neville steps down in Jonathon’s favor.  Terry’s radicalism becomes ambiguous when, despite his professed distaste for the people and system represented by the colonial bastion that Blenheim represents, he asks Jonathon for his job back. Further complicating matters is Nan, of whom Jonathon is very fond. Her job is on the line, presumably because of classroom comments that some students and another teacher found objectionable, harmless as they sound when we hear them. (The actual charges against her are annoyingly vague, made worse by her not having a chance to defend herself.)  So, at the end, Jonathon, no longer able to retreat from the real world, must face the moral dilemma of deciding whether or not to buck the establishment by rehiring Terry and not axing Nan. 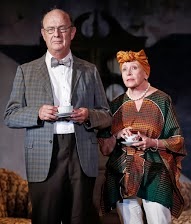 
Mr. Baitz is American born but spent six years growing up in South Africa before returning here, so the world he captures in THE FILM SOCIETY comes from his own experience, and, to these untutored ears, rings true, even though we never see either the students or the black persons whose presence lurks only in the dialogue. But beyond the specific politics of South Africa, which provide the backdrop, the play is rife with political and moral issues of a universal nature. Jonathon, for example, although nothing explicit is said about it, is clearly gay, and is made painfully aware of the loneliness he faces, whatever decisions he may make. Nearly all the principal characters are faced by serious ethical questions whose answers will alter their lives; Baitz carefully demonstrates the ways in which people must compromise in order to survive. Helping to bring these issues to life is the playwright’s richly literate language, sounding authentically like what one would expect to hear from people educated in schools like Blenheim.
Euan Morton and Mandy Siegfried. Photo: Carol Rosegg.
'

Director Jonathan Silverstein cannot always prevent the talky play from lapsing into longeurs, but his staging is generally brisk and efficient. Euan Morton plays Jonathon Balton with intelligence and care, but his prissy manner, and upper-class British tone seem a bit more redolent of Oscar Wilde than Jon Robin Baitz (I wonder if there’s a connection between the names of the playwright and character). Nathan Lane originated the role at Second Stage 25 years ago, and a review of his performance notes “his finely drawn comic performance.” This comes as a surprise because Mr. Morton’s somewhat acidic Jonathan has about as much humor as a juicy lemon. Although his accent is irregular, I liked Gerry Bamman’s Neville Sutter; he combines friendly warmth with steely strength, and humanizes a role that could easily become unlikable. Roberta Maxwell’s Mrs. Balton exudes the required essence of control and canny manipulation, but Ms. Siegfried’s Nan is uninteresting, and David Barlow’s Terry, for all his anger and frustration, lacks the depth this fine actor recently brought to his roles in The Castle and Serious Money with the Potomac Theatre Company. In the smaller role of the irritable Hamish Fox, Mr. Hoxie brings force and vitriol.


THE FILM SOCIETY is one of several American plays being revived at the moment, on and Off Broadway. You may be interested in seeing this early work of Mr. Baitz, which demonstrates the promise that has since materialized in plays like his Tony-winning OTHER DESERT CITIES of recent memory. If you know the difference between A TOUCH OF EVIL and A TOUCH OF MINK, you’ll find it leans more toward the former than the latter, but without the genius of Orson Welles.
Posted by Samuel L. Leiter at 7:41 PM