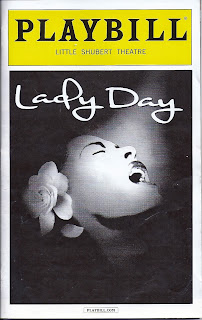 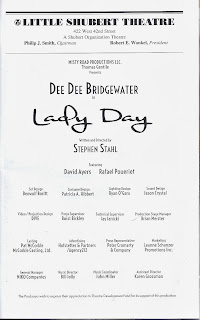 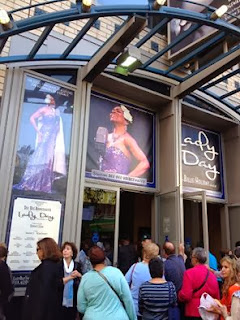 Outside the Little Shubert Theatre.
Whoever needs a reminder of why Billie Holiday was one of the greatest jazz vocalists of the last century should get on down to the Little Shubert Theatre on W. 42nd Street where the outstanding Dee Dee Bridgewater is channeling the singer in LADY DAY, a concert cum drama about the vocalist’s tragic life. Let’s get one thing out of the way: the part of this show that can loosely be called a tribute concert is terrific, and fans of Lady Day, as this major African-American artist (who died at 44 in 1959) was popularly known, will be more than satisfied by how well her singing has been captured by Ms. Bridgewater. Without the music, however, the drama part is disposable. For this, one would need a play in which the music was secondary to the story, if that were possible, as was the case back in 1986 when Lonette McKee tackled LADY DAY AT EMERSON'S BAR AND GRILL, a work revived just this year in Chicago. That play included 15 songs; this one has 29.


Playwright Stephen Stahl (who also directed) places the action of LADY DAY in 1954, when Holiday, completing an extensive European tour, performed in London. His first act shows her arriving late for a rehearsal with her band, represented by a marvelous four-piece ensemble composed of Sunny (Bill Jolly), a pianist; Deon (James Cammack), a bassist; Kelavon (Jerome Jennings), a drummer; and Elroy (Neil Johnson), a saxophonist, the only white man in the group; the great black saxophonist Lester Young, who was so intimately involved in Holiday’s career, is referred to but not represented.


The locale is the unadorned stage (designed by Beowulf Boritt), with its soaring brick walls and upstage loading dock, where the concert is going to be performed; a ruggedly handsome assistant stage manager (Rafael Poueriet)—briefly ogled by Holiday—goes about his tech business as the band members banter among themselves and with Billie and her white road manager, Robert (David Ayres), a pleasant-looking, blandly acted young man who worries over her troublesome habits. Billie, after all, has a serious history of drug and alcohol addiction. As she rehearses a string of songs from her popular repertory, she suggests ways she wants to approach several of them (as if she hasn’t sung them over and over with this band throughout the tour).  When she’s alone, the devils of memory besiege her and, spotlighted down left, she reenacts key moments of trauma in her life as the bastard child of a troubled Philadelphia woman, including when she was raped by a friend of her mother’s at age ten. Sometimes, like Tevya in FIDDLER ON THE ROOF, she talks to God. Ms. Bridgewater, although she doesn't vocalize the other characters in her recollections, engages in dramatic confrontations with them in the glare of harsh spotlighting (designed by Ryan O'Gara), as vivid video projections of images reflecting the indignities faced by blacks in the pre-Civil Rights era rush by. Meanwhile, since it’s pouring outside, the clichéd aura of impending doom is emphasized by flashes of lightning seen through the open dock door.

Dee Dee Bridgewater. Photo: Carol Rosegg.
In act two, which is when the show truly comes alive, we're at the actual concert. The stage is decorated with fancy upstage curtains, and a large flower arrangement; all the musicians are in tuxes. Ms. Bridgewater has changed from the simple red dress and pony-tail of the rehearsal to the glamour of the classic Holiday look, her brown arms and shoulders (the 63-year-old Ms. Bridgewater’s are notably toned) embraced by the warmth of white ermine; a white, sequined, floor-length gown (the costumes are by Patricia A. Hibbert) enveloping her body; and her hair tied back and adorned with a white gardenia. Now, instead of reliving her disastrous life in flashbacks, Holiday gets drunk, strays from the script she’s supposed to be following, and in the playwright’s conceit, exposes her private life to the English audience; this allows her to tie many of the songs together with her personal narrative, as in so many biographical and autobiographical cabaret acts. What makes her ill-advised behavior especially problematic is that she knows she has to keep her nose clean because she needs to demonstrate to law enforcement back in New York that she deserves to have her cabaret card restored to her; it was  taken when she got was sent to prison on drug charges and without one no nightclub can hire her, regardless of her stardom.


The scripted portions provide interesting information for the uninitiated but are awkwardly written, artificially motivated, and, often, distractingly intrusive; they are basically exposition in search of a play. Happily, Ms. Bridgewater is a damned good actress and does a bang-up job of making her weak material sound believable. She plays Holiday’s direst moments without any partners (including her rape) and shifts gears radically from one emotional peak to another, all the while sliding instantaneously back to the present to chat with her musicians or the audience, or to sing one sensational number after the other. She plays Holiday with a sassy, fast-talking, no-nonsense attitude that brings to mind the late Pearl Bailey, although I’m not sure how closely this behavior matches the real Holiday’s personality; also, there’s a bit too much self-congratulatory laughter whenever Holiday says something she thinks is funny. Listening to rare interviews with her on YouTube reveals a more restrained and subtle person, with a somewhat slurry speaking style that resembles the tone Ms. Bridgewater very believably captures when Holiday gets drunk. This Holiday occasionally speaks to the English audience using mild profanities (like “shit”) that I doubt would have gone down well on a 1954 London stage, so I have to assume playwright-director Stahl is taking liberties here.


The glory of this show, as I've indicated, is Dee Bridgewater, not only making silk out a sow’s ear script, but incarnating the memorable Holiday singing style and vocal chops across an enormous range of mostly terrific songs. Among the best known, of course, are “A Foggy Day in London Town,” “All of Me,” “Lady Sings the Blues,” “Lover Man (Oh, Where Can You Be?),” “Strange Fruit,” “My Man,” “God Bless the Child,” “Please Don’t Talk About Me When I’m Gone,” “T’ain’t Nobody’s Bizness,” “Mean to Me,” “You’ve Changed,” and so on. Some are sung without much ado, some are encased in an anecdote, like the famous social protest song, “Strange Fruit.” Click on YouTube and type in Billie Holiday and any of these or other songs and get yourself in the mood for the next best thing to the real thing—Dee Dee Bridgewater as Lady Day.
Regrettably, there were too many empty seats at the Saturday matinee I attended; this show is far more deserving of an audience than a lot of others out there. Despite its drawbacks, LADY DAY made my day.
Posted by Samuel L. Leiter at 4:55 PM