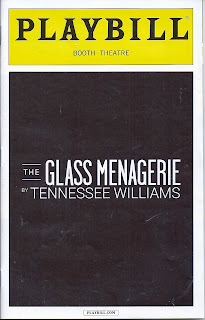 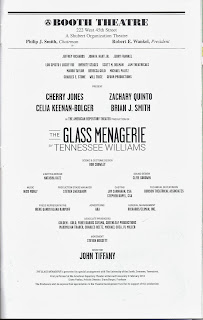 When intermission arrived during the Booth Theatre’s smash hit revival of Tennessee Williams’s eternally beautiful THE GLASS MENAGERIE, I spent the time re-reading on my Iphone Ben Brantley’s A+++ review in the New York Times, one of many that agreed that this was a revival for the ages. As Mr. Brantley put it, the production “promises to be the most revealing revival of a cornerstone classic for many a year to come,” with “career-defining performances” by Cherry Jones as Amanda Wingfield and Zachary Quinto as Tom. Why wasn’t I feeling “the breath knocked out of” me, as Mr. Brantley predicted; why was I not being as emotionally shattered as I have by other productions of this frequently revived play? And why did two women seated in my row, who must have spent a fortune for their tickets (a friend of mine paid over $200 for his), not return after act one?


Director John Tiffany, to his credit, has sought to break free of the relatively substantial scenery so common to the play’s productions ever since its 1944 Chicago debut prior to its New York premiere in 1945. As Tom’s opening monologue declares, “The play is memory. Being a memory play, it is dimly lighted, it is sentimental, it is not realistic.” Alluding to Jim O’Connor, the Gentleman Caller of act two, he notes that only that one character is to be considered realistic, “being an emissary from a world of reality that we were somehow set apart from.”


These and similar signposts in the text have inspired set designer Bob Crowley to abandon walls entirely, as well a naturalistic fire escape entrance into the apartment; instead, he has provided some simple platforming, with a table, chairs, and wooden screen at stage right, a large couch and small cabinet for Laura’s glass “menagerie” at center, and an expressionistic fire escape at left that ascends into infinity in jagged forced perspective. Memory’s vast spaces are suggested by a black drop at the rear, thus allowing us to focus on the actors. According to what I’d read in the reviews, there were pools of dark liquid downstage of the platforms; I say this because, seated in row F, I couldn't see them without standing.
This stripped-down visual approach left me missing the sense of period a more considerable environment would have provided. As many previous revivals have shown, it is certainly possible to create an imaginatively theatrical impression of the Wingfields’ cramped and rundown apartment without replicating it in detail, and even without solid-seeming walls. (Just Google THE GLASS MENAGERIE and then click on Images.) Similarly, I question the decision to suggest that the photo in a doughboy’s uniform of Amanda’s long-gone husband, the “telephone man who fell in love with long distances,” is somewhere out in the auditorium, forcing the actors to look out there when referring to him. Tom, of course, calls him the play’s fifth character, and without his constant presence overseeing the action, where we can see him, the play is robbed of an important dimension.


Mr. Crowley also designed the costumes, which are more or less acceptable for the 1930s, but Amanda’s old white cotillion dress, which she pathetically dons in an effort to recapture her days as a Southern belle so as to impress the Gentleman Caller, is too overdone with frills and furbelows; while supposed to be rather sad in its tattered glory, it seems distractingly farcical.


Natasha Katz’s lighting, despite its eloquence when illuminating the Wingfield apartment, begins to pall when it has only the same black curtains backing all the action. With all the fire escape business and the references to the nearby Paradise dance hall, the lack of some magical aura of neon jazziness coming from offstage seems especially surprising. There is also a considerable amount of appropriately moody music, composed by Nico Muhly, to the degree that the play sometimes resembles a film in the way music is used to underline the action; sound designer Clive Goodwin, though, eschews familiar period music when it might have proved useful, thereby once again distancing the play from its particular time and place in what is perhaps an effort to universalize it. But since Williams so specifically makes time and place a driving force (the Depression, workers’ salaries, World War II), without the kind of aural markers that elicit emotional responses to those dark days the play is greatly weakened.


To heighten the poetic feeling further, movement specialist Steven Hoggett has inspired the actors, at various moments, to use their bodies and arms with dance-like expressiveness, as when Laura and Amanda set the table; such movements are made even more evocative by the infrequent use of actual props, which are often mimed. Laura’s collection of glass animals is represented by a single tiny unicorn, which sometimes gets its own narrowly focused spot shining through it onto Laura’s face. When Tom finishes his opening monologue he seems to be thrust from the fire escape into the living room, as if crashing through the barrier between his memories and his present state of being. These touches, including Laura’s first appearance, when she magically emerges from the couch, to which she returns at the end, add a touch of artful whimsy to the proceedings. They are, however, relatively infrequent, and, despite their presence, the acting, for the most part, remains solidly rooted in realism, heightened as it often may be. Then again, director Tiffany has very carefully calibrated the pacing, giving the performances a musical substructure that works to their advantage.
Ever since Laurette Taylor, making a comeback from alcoholism, introduced the self-dramatizing, maternally smothering Amanda Wingfield, constantly recalling her life in genteel society, her performance has been considered the role's benchmark for all later actresses. Writing in Catholic World, critic Euphemia Van Rensselaer Wyatt said that Ms. Taylor “has discovered the Duse method of making the most delicate delineation indelible. She seems to speak in whispers yet can be heard in the farthest seat in the balcony; her Southern accent is never accented and yet it colors not only her diction but her gestures; she appears too fluttery to be sure of her next line yet she dominates imperceptibly the whole action. Her gentleness may appear flabby but it is indestructible. . . . She is a presence, pathetic, comic and tragic that her son can never forget—nor her audience.”


Some of the greatest actresses of our time have assayed the part, and many have succeeded gloriously, but Cherry Jones’s Amanda is being lauded as one of the greatest, if not the best that veteran critics have ever seen. I’m a devoted fan of Ms. Jones’s, and have always been extremely impressed by her creations; it is impossible to deny that her Amanda is a powerful, incisive, authoritative, funny, and often beautiful piece of work; many of her readings, combined with perfect timing, a grand voice, and a magnolia-thick Southern accent, highlight the lines with new insights. But her emphasis on Amanda as a larger-than-life eccentric, one whose behavior sometimes borders on the bizarre, makes her hard to sympathize with. For all the fluency of her movements, Ms. Jones's big-boned physical presence lacks fragility and the urgency of her plight never quite comes off. It is this plus her tendency toward the uncomfortably neurotic, I think, that robs the production of the poignancy and pathos it requires.


Although he has been widely lauded, a small number of critics have found Zachary Quinto’s Tom too overtly gay, as if he were channeling the playwright himself (Tom is, of course, based on Thomas Lanier “Tennessee” Williams), but I wasn’t particularly aware of anything overdone in this regard. On the other hand, Mr. Quinto’s readings of Tom’s lyrical passages, delivered in an attempt at poetical panache, don’t always ring true; this was made especially apparent when, speaking a line in the manner of his friend, Jim, he suddenly sounded like a real person. Tom’s confrontations with Amanda in this production are sometimes very harsh, and these moments are quite effective in conveying the frustrations of the characters and how uncomfortable and angry they make each other, but I didn’t see anything else in his performance that raised it to the landmark status others have conferred on it. On the contrary, the impression he left was merely ordinary.


As Laura, Celia Keenan-Bolger is convincing as the pathologically shy Laura, who hobbles about with one foot turned in to suggest the limp that has crippled her both physically and emotionally. Laura’s classic scene with the Gentleman Caller, sensitively played by Brian J. Smith, does not disappoint, but, then again, I can’t remember any production where it failed to work, even the two college productions I’m familiar with.


THE GLASS MENAGERIE is not as delicate as the creatures the title brings to mind; good acting and direction can make it work even when no stars are involved. And stars can sometimes do serious damage to it, as reportedly happened when Jessica Lange and Christian Slater received a drubbing in the 2005 Broadway version. In the present production, the stars are out again, and for all their brightness, they and the play are never quite in full alignment.
Posted by Samuel L. Leiter at 8:05 PM