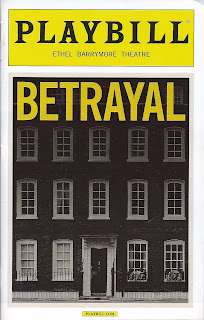 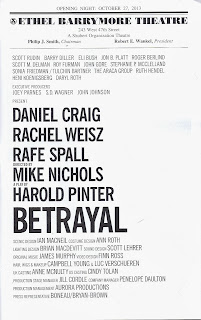 Harold Pinter, a Nobel Prize winner, was probably Britain’s foremost playwright when he died in 2008. The playwright who would likely be considered his equivalent today was standing right next to me as I waited for the crowd in the aisle to move after the new revival at the Barrymore Theatre of Pinter’s BETRAYAL ended. As we stood there I could swear I overheard him whisper to his companion, “I’m going to see this again.” The remark stuck with me as I wondered what prompted him to say it. Did he really like it that much? Is he a close friend of any of the stars, Daniel Craig, Rachel Weisz, or Rafe Spall, or perhaps with director Mike Nichols? Did he feel he’d missed something important? Was it so richly layered that only a second viewing could bring out all its nuances?  Did I simply mishear? Whatever his reason, if he said it, he would probably have to pull strings to get in since the show reportedly is sold out through its limited run. 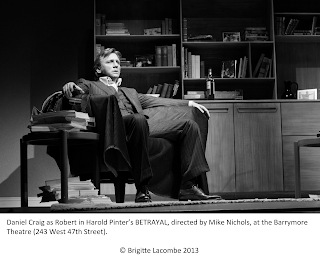 The audience’s response was certainly warm enough to suggest that the production had gone over very well. Despite the large contingent of critics and journalists present, enough people had paid heavy prices for their seats to suggest either that they were applauding something they believed had been a good investment or that, on the contrary, they felt that, by gum, they had spent all that money and refused to believe it wasn’t worth it. As for me, I’m almost reluctant to say the show was mostly a big ho-hum. 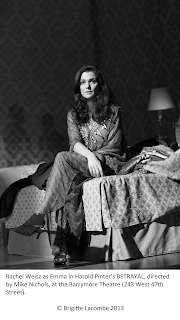 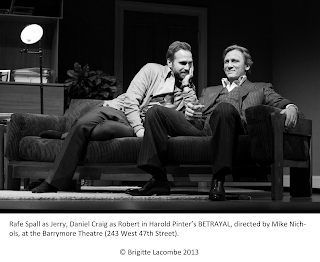 Pinter’s play, premiered in London in 1978, and had a Broadway production in 1980 starring Raul Julia as Jerry, Blythe Danner as Emma, and Roy Scheider as Robert. And, of course, there was the fine 1983 film starring Jeremy Irons as Jerry, Patricia Hodge as Emma, and Ben Kingsley as Robert. I recall thinking that the Broadway production was miscast with otherwise excellent American actors who never convinced me that they were British nor in full command of Pinter’s finely shaded writing. In the present case, three major British actors--Daniel Craig, Rachel Weisz (Craig's real-life wife), and Rafe Spall--are doing the play under the guidance of one of Broadway’s leading directors, Mike Nichols; although there is no longer a problem of their Englishness, they never manage to embody the multileveled, subtle interplay among the characters, and there is nothing revelatory about the performances.


BETRAYAL is Pinter’s admittedly autobiographical, if fictionalized, account of his seven-year extramarital affair in the 1960s with a BBC TV personality, Joan Bakewell, while he was married to actress Vivien Merchant. It tells the story of how, in 1968, Jerry, a literary agent (Pinter’s avatar), a married man and father, falls for and begins his affair with Emma. She is the gallery-owning wife of Robert, a publisher who is Jerry’s closest friend (his best man, in fact). The affair lasts seven years and ends in 1975. For much of the time,  the lovers conduct their clandestine romance in a rented flat. A coda, set in 1977, two years after the affair ends, brings the former lovers together at a pub, and Emma reveals that she is now involved with another writer, one of Jerry’s clients whose publisher is Robert. What makes this otherwise straightforward tale of adulterous love and deception intriguing is its backward chronology, with the 1977 post-affair coda actually being the first scene, and with the play then proceeding to eight scenes set, respectively, in 1975, 1974, 1973, 1971, and 1968 (1977 has two scenes and 1973 has 3).


Apart from Pinter’s lauded use of elliptical language and meaningful pauses (when properly used) the story, even with its creative ways of exploring the multiple ramifications of betrayal, seems--at least in this version--rather thin, and dull patches keep cropping up in the colloquies among this civilized, sophisticated, and articulate trio, navigating the treacherous waters of friendship and marriage. The characters play ongoing games of power and positioning, occasionally hinted at metaphorically by the seemingly friendly competition at squash between the cuckold and his deceiver. Robert, aware of the ongoing affair, dispassionately uses his knowledge as a way of dealing with Jerry, who doesn't know until the affair is over that Robert knew of it. The play can only work if each of the actors is able to fully express layered levels of mendacity and guilt (Robert is also an adulterer). Watching the affair from the time of its conclusion to the time of its inception allows us to see how and why it had to end, but without a deeper sense of the characters’ psychological underpinnings the intended impact loses its force.


The flashiest role is that of Jerry, the lover, and Rafe Spall gives a forceful but often clownish performance, making me wonder what it was in him that led Emma to poison her relationship with Robert. Rachel Weisz is an enticingly beautiful Emma, but, while she offers an intelligent and heartfelt reading, she fails to leave a memorable impression, possibly. The biggest letdown comes from Daniel Craig, whose star power is not enough to make his Robert interestingly three-dimensional. I missed any subtextual menace in his behavior toward either Jerry or Emma, of whose affair he has known for years. (For some reason, Mr. Nichols's staging suggests he knew of it from the start, rather than from 1973, when Pinter's script says he learned of it from a letter.) Overall, Mr. Nichols runs some scenes at too brisk a pace, paying too little attention to the pregnant pauses called for by the script.

Set designer Ian MacNeil has created a series of rooms whose walls consist of translucent, scrim-like material (opaque under Brian MacDevitt's lighting) that rise into the flies when no longer needed and are replaced by other rooms that descend. The scenery is interestingly attractive but the floating rooms take too long to change. When appropriate, Finn Ross’s projections help to set the scene, notably when we see lovely video of gondolas floating by in Venice. There is some nice incidental music by James Murphy, and Ann Roth's costumes capture well the changing times and places.


I can’t say I felt totally betrayed by this production of BETRAYAL; it's certainly nice to be in close proximity to famous movie stars. I still wonder, however, what it was that today’s leading British playwright felt about it that would make him want to see it yet again.