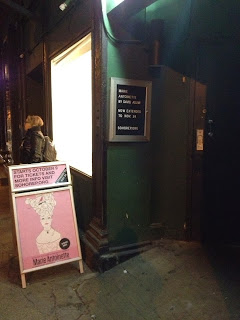 Outside the Soho Rep, on Walker Street in Tribeca.
In his poem, “If,” Rudyard Kipling wrote, “If you can keep your head/ when all about you are losing theirs and blaming it on you . . .” Someone who literally couldn’t keep her head and was blamed for the loss of others was Marie Antoinette, the pretty Austrian woman who, at 14, married King Louis XVI of France, and who epitomized by her lavish life style the lack of equality that led to the French Revolution. This famous queen of bling has been the frequent subject of movies, fiction, and drama.


The latest play to bring her back from the dead, with her hair piled high on a head once more in place, is David Adjmi’s satire, on view at the Soho Rep, where—as nicely directed by Rebecca Taichman—it’s being given a bare bones production that barely hints at the excesses that made Marie notorious. The costumes (by Anka Lupes) and scaled-down wigs (by Amanda Miller) only wink at an18th-century flair, combining a few select period elements with mostly modern clothing. 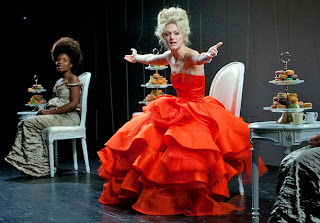 
The runway model-thin Marin Ireland plays the fashion-conscious queen, who's dressed nearly throughout in a full-length red party dress with flaring flounces. In Mr. Adjmi's take, Marie comes off as a ditzy, spoiled, self-involved airhead, stuffing her face with macaroons and speaking like a gossipy high school mean girl until all around begin losing their heads; then, her own life in danger, she begins to grow serious and even engages in political back and forth with her jailer and a sheep (yes, a sheep).  Until then she’s not so much cruel and ruthless as she is clueless; her arrogance and ignorance are explained as the outcome of an upbringing methodically designed to make her into a queen, with no appreciation for the niceties of behaving decently toward those less fortunate.


The play reportedly had a more visually sumptuous production when coproduced by the Yale Repertory Theatre and the American Repertory Theatre earlier in the year. The limited circumstances of the Soho Rep’s tiny Walker Street theatre have inspired a less elaborate presentation. Riccardo Hernandez's simple set makes no attempt to conjure up the splendors of Versailles, where much of the action transpires. The audience sits mostly in two rows along one wall of the rectangular space; it faces a long white wall about 10 feet high on which the words MARIE ANTOINETTE are emblazoned in relief. When necessary, the wall serves as a screen for projections (by Christopher Ash) of pertinent historical information about dates and events in the French Revolution. Furniture is limited mainly to a handful of white chairs and a bench. Stephen Strawbridge’s excellent lighting goes a long way to vivifying this empty setting, and a powerful sound design by Matt Hubbs, which sometimes threatens to blow your eardrums out, does a great deal to create a sense of the trouble brewing offstage as the revolution moves into gear.


Few of the characters have any dramatic weight other than as foils for Marie’s garrulous chatter; among them are her brother, Joseph (Karl Miller), who insists on the importance of her bearing an heir; her presumed lover, the handsome Swedish officer Axel Fersen (Chris Stack); and her Danny DeVito-like husband, Louis XIV (Stephen Rattazzi), wearing a period powdered wig; poor Louis, we learn, can’t get Marie pregnant because his penis is blocked and “the stuff” can’t get out unless he has surgery. There are also a pair of ladies-in-waiting, Yolande de Polignac) (Jennifer Ikeda) and Therese de Lamballe (Marsha Stephanie Blake); a child, the Dauphin (Aimée Laurence), played by an adorable little girl; a Revolutionary (Will Pullen) representing the rabble, who sat in the seat next to me like a member of the audience until jumping up midway to join the action; and the aforementioned sheep, a whimsically philosophical creature played both by a puppet manipulated by David Greenspan, and by Mr. Greenspan himself.


Much of the play—which, to its detriment, brings to mind Sofia Coppola’s exquisite 2006 film of the same title—has a tongue-in-cheek feeling, but it does eventually make points on issues of power and democracy, noting that there can be no true equality because power can’t be shared. Democracy, in this view, is merely illusory. The play sticks closely enough to the historical facts to give a rough idea of what happened to the royal family in the years from 1777 to 1791; still, satire or no, its humor is insufficient, its history is unilluminating, and its presentation is often dull. Wonderfully, Marin Ireland rises above the weakness of the material to deliver a memorably smart and varied performance, but, like everyone else involved, her character is too cartoonish to care much about, even when she’s moving inexorably closer to her date with that falling blade.


Despite material that promises considerable dramatic and visual excitement, MARIE ANTOINETTE is neither dramatically nor visually exciting. Cue the guillotine.
Posted by Samuel L. Leiter at 8:42 AM