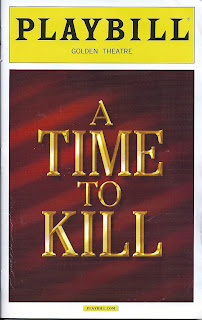 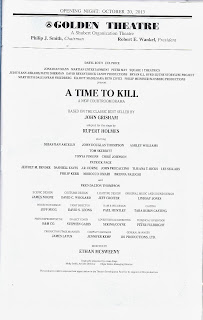 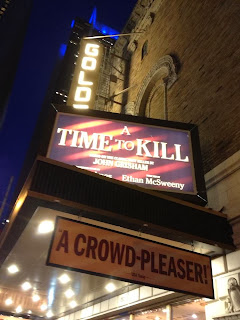 Although the  Web site “Did He Like It,” one of several that reprints reviews of new shows, sometimes offers only the reviews of Ben Brantley or Charles Isherwood of the New York Times, it more often aggregates up to five reviews, as it did last week for Rupert Holmes’s A TIME TO KILL. This adaptation of John Grisham’s best-selling courtroom novel has moved to Broadway after receiving its world premiere at Washington, D.C.'s Arena Stage in 2011, with a different cast. It's also familiar from its excellent 1996 movie version starring Matthew McConaughey as Jake Brigance, the idealistic young lawyer; Kevin Spacey as the DA, Rufus Buckley; Sandra Bullock as Ellen Roark, Jake’s legal assistant; and Samuel L. Jackson as Carl Lee Hailey, the black man who shoots to death two rednecks who brutally raped and nearly killed his 10-year-old daughter. “Did He Like It” prepares the reader for the reviews by running a banner showing vivid cartoon figures showing their reactions: the critic who likes the show has a bright smile and big thumbs up; the one who isn’t sure sits on a fence; and the guy who didn’t like it sticks out his big red tongue and holds his thumb down in disgust. Of the five reviews the site chose to collect for this play, four were thumbs up, one showed the fence sitter, and there were no raised thumbs.
Photo: Carol Rosegg.
Had the little cartoons included the opinions of my companion and me there would have been two more little fence sitters, although in my case I’d be holding on tight not to fall off and break my neck. I’m not a Grisham reader, and know his books only from their movie adaptations (this is his first to be made into a play). Seeing A TIME TO KILL, as my friend noted, is like reading a book you pick up at the airport; you want to burrow into it, hoping it will make your flight go faster. The play moves quickly, the characters are boldly outlined, the acting is boilerplate, everything looks handsome, and it ends in an audience-comforting manner. It is, you could say, entertaining enough to get you through two-and-a-half hours of being squeezed into a non-reclining Broadway seat while hitting frequent dramaturgical air pockets that bounce you around mentally before you arrive safely at your destination. 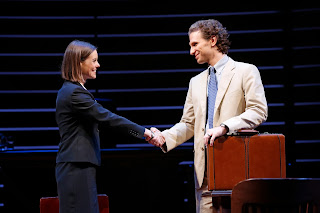 The minute I saw photos of the show before it opened I noticed how closely its leading actors, Sebastian Arcelus as Jake and Patrick Page as Rufus, resembled the movie stars who’d originated these roles.  As I watched the play, the film lingered vaguely in my mind as a point of comparison; it suggested that the producers were banking on its familiarity as a starting point, rather than going for a new and original take on the characters.

Most of A TIME TO KILL, set in the fictional Mississippi town of Clanton, takes place in a courtroom, presided over by Judge Omar Noose (Fred Dalton Thompson, the former presidential wannabe), and, yes, there’s a wisecrack at the expense of his name. Carl Lee Hailey (John Douglas Thompson), the well-liked black man whose daughter has been raped, takes vengeance into his own hands by shooting the two sleazeballs who raped his little girl, and goes on trial for murder and for injuring a deputy hit by a ricocheting bullet. The smart, good-looking young attorney, Jake Brigance, takes the case, and agrees to take on as his legal assistant, a pretty young whiz kid, Ellen Roark (Ashley Williams). They are up against a crafty and powerful DA in the smoothly confident, well-tailored Rufus, who has his eyes on the governorship and could use this victory to enhance his political position. The case hinges on Jake’s employment of the insanity defense. When things go wrong with the shrink who agrees to be his expert witness (John Procaccino) because of damaging information about him dug up by the prosecution, Ellen comes up at the last minute with a masterful bit of research that turns the tables on the prosecution’s witness. 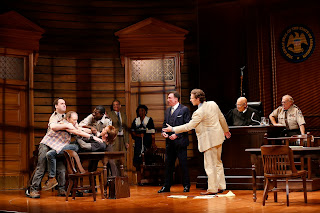 Photo: Carol Rosegg.
The plotting is palpably contrived; the courtroom theatrics are in the good old grandstanding tradition, including the interjections of the crusty but witty judge; the melodramatics are slathered on like sauce on a Southern barbecue; and, despite the good ol’ boy ambiance, with the KKK making threats (there's a huge burning cross), and the difficulties of a black man getting a fair shake in a Mississippi venue, justice prevails. Or does it?
Ashley Williams, Sebastian Arcelus, Tom Skerritt. Photo: Carol Rosegg.
What the play actually does, even if unintended, is demonstrate that when you’re on trial, you’re merely as good as your lawyer, and even then, only if there’s a skeleton in the legal closet you can uncover and wisely use to your benefit before your case implodes; this playwriting ploy has been used in countless TV legal dramas, and its employment here only serves to underline the flimsiness of the case on view. What Carl Lee Hailey did could easily be considered premeditated murder, and many spectators are likely to feel coldly manipulated by the way the story plays upon their feelings to gain sympathy for him. 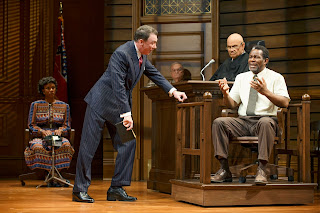 James Noone’s attractive set is a high, semicircular wall of horizontal wooden planks with four tall courtroom-type doors. It is built to allow multiple locales to roll into place on moving platforms, or to alter the angle at which the audience views the courtroom. Video projections, by Jeff Sugg, of external events bring the outside world into the space (although they're too often indistinct), and the exterior of Jake’s home is created by a projection that allows one of the doors to serve as the house’s entrance. Jeff Croiter’s expert lighting does much to create the proper atmospherics. Lindsay Jones contributes a significant amount of background music and sound effects.

Director Ethan McSweeny has the actors playing almost continuously at high-energy, high-decibel levels. He has staged the big courtroom scene as if the audience is the jury, which grows annoying as the lawyers pace back and forth across the stage’s expanse speaking to an orchestra filled with people who have rushed down during intermission to occupy the many empty seats (surely, those reviews!); the kind of intimacy between attorney and jury in a real courtroom is sadly weakened by this choice, which requires even more lawyerly grandiosity than normal.

Another questionable decision has three actors play multiple roles, two of them being especially problematic. John Procaccino plays both the public defender replaced by Jake Brigance and the expert witness selected by Brigance at the suggestion of Lucien Wilbanks, the disbarred, alcoholic lawyer played by Tom Skerritt (Donald Sutherland in the movie). Lee Sellars, who plays one of the rapists, reappears in the guise of the state’s expert witness (he plays another role, as well, in which his face is not always visible). The effect of seeing these actors attempting to play totally different parts (Sellars is more successful) is to remind you of the phoniness of the whole enterprise, when the last thing you should be thinking of is wondering why the producers couldn’t have hired other actors.

Patrick Page stands out as the calculatingly smooth Rufus, and, as he always does, dominates the stage with what is probably the most resonant actor's voice on Broadway. Fred Dalton Thompson, a veteran of roles like that of the judge, is a welcome presence of gravity and humor, but few others on the stage give other than standard-issue performances.

As I’ve said, A TIME TO KILL, like many airplane (or beach) novels, is entertaining enough to keep you occupied for a couple of hours, but not enough to pass it along to anyone else when it’s over--unless, that is, they have plenty of money to burn and time to kill.