126. Review of THE DOWNTOWN LOOP 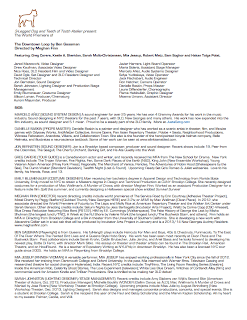 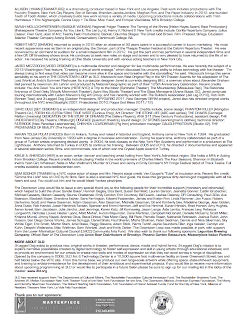 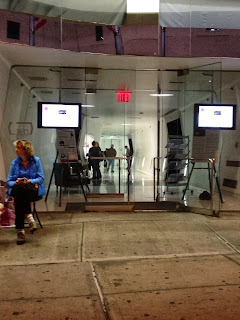 The outside entrance to 3-Legged Dog, 80 Greenwich Street.


I could have used a ride on the downtown loop to get from the A train at Fulton and Nassau over to 80 Greenwich Street, where Ben Gassman’s unusual play, THE DOWNTOWN LOOP, is running at 3-Legged Dog. I’m a native New Yorker (Brooklyn and Queens) but this venue, in the financial district, is not in my geographical comfort zone, so I relied on my trusty Iphone map app, which also seemed the guide du jour for other intrepid citizens navigating the narrow streets near Trinity Church. It was rather eerie, actually, walking the post-dusk, emptying streets of old Nieuw Amsterdam with shadowy figures passing by and glowing dimly in the light of their handheld devices as they progressed cautiously, like two-legged Peter Stuyvesants, down Nassau, Liberty, or Rector. This was all to the point, though, as I was heading for a night where technology ruled, the mission of 3LD—a.k.a. 3-Legged Dog—being to “explore the new narrative possibilities created by digital technology, and to provide an environment for our artists to create new tools and modes of expression so that they can excel across a range of disciplines.” 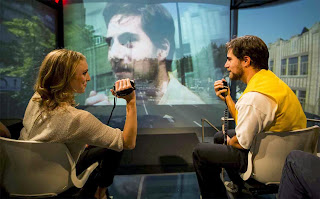 Sarah Mollo-Christensen and Greg Carere. Photo: Todd Carroll.
THE DOWNTOWN LOOP, directed by Meghan Finn, makes considerable use of technology in its attempt to recreate the feeling of a tour bus ride through Manhattan, although the play to which the experience is tied gradually runs out of gas. When you enter the performance space you climb a short flight to the rear of the “bus,” a series of steel and glass risers with narrow white, plastic seats arranged in rows of two and three on either side of a center aisle. Large video screens surround the entire space, and the bus has neither walls nor ceiling, as you’re supposed to be on the upper deck. To either side are metal railings to keep people in the outer seats from falling off, and beneath your feet is a floor made mostly of glass through which you can see a double bed, meant to be in a hotel room, and a graffiti-covered bathroom at a club. Depending on where you’re sitting, you can either view the several scenes played in these lower-deck spaces by peering straight downward, or you can watch them on the live video feed projected on the screens; camera operators with long, narrow microphones can also be seen. 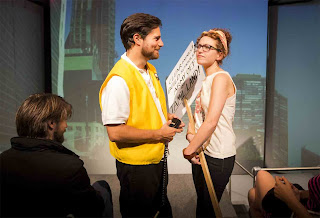 The principal tech achievement, however, is the projections of New York City that fill the big screen in front of you and the screens to either side, obviously shot with multiple cameras from an actual bus. Our vehicle moves at a slow and steady pace; I found the most effective moments to be when it gradually turned from one street into another. You may want to know that my theatre companion later said he experienced some mild symptoms of motion sickness. The technology, however, while promising, is not yet advanced enough to blend the frames, so there is some unevenness to the effect, and the images (which also include still montages) are not sharp or bright enough to even approach the colors and vibrancy of the real thing. The event's uniqueness, therefore, while initially intriguing, tends to dissipate, and you begin to search for familiar city landmarks to help you determine precisely where the bus is located at any point in time. Since the video (expertly designed by Jared Mezzocchi) has been carefully edited, you don’t get a sense of real time and place, nor are you supposed to. Eventually, the city becomes just a generalized backdrop to the personal problems of the Tour Guide.

As the bus proceeds, the cynical guide (well played by Greg Carere) delivers an offbeat explanation, mingling fact and fiction, about the city’s locations while periodically encountering Her (Keelie A. Sheridan), the young woman with whom he has been having a diminishing relationship; at one point she enters from near the U.N. carrying a protest sign on behalf of Sri Lanka's Tamil Freedom Fighters. As this suggests, the play veers from realism to surrealism; nothing can be taken at face value, including the several occasions on which the guide, needing a meditative break, says he’s going swimming. The guide also has sexual liaisons in the aforementioned hotel room with a Basque tourist (Sarah Mollo-Christensen) and with a Finnish woman (Mia Jessup) in the bathroom. There are other digressive events/characters that crop up as well: Shimon (Robert Metz), an Israeli peddler of souvenir tchotchkes, has an oddball relationship with Faoud (Hakan Tolga Polat), an Egyptian hot dog vendor. The Tour Guide and his idealistic Trainee (Sam Soghor) discuss the former’s obsession with asking for tips and his fondness for including inaccurate information in his spiel. The action, which also takes place in the Blarney Stone pub and something called the Couldn’t Club, appears to cover several days.


The play proper, which runs 75 minutes, is an offbeat experience I'm sure many will enjoy, but it never is as funny as it tries to be; once the premise is established, the bus’s wheels keep turning but it never really goes anywhere. The play deals with issues of authenticity, but, if you’re looking for an authentic--if touristy--bus tour, with comedy and music thrown in, you might consider THE RIDE. Its tour guides won’t bother you with their personal angst, and you won’t be so relieved to get off the bus.
Posted by Samuel L. Leiter at 6:30 AM