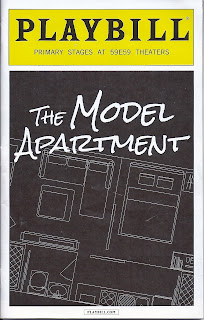 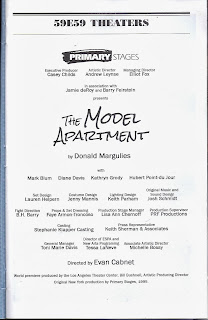 As I left 59E59, where I’d just seen Primary Stages’ revival of Donald Margulies’s THE MODEL APARTMENT, a drama about Holocaust survivors, I overheard another theatergoer complaining to his companion about the surfeit of plays about what happened to the Jews well over half a century ago, when there are much more recent genocidal catastrophes that go unnoticed by contemporary dramatists. He may have had a point, but for many New York playgoers, at any rate, the Holocaust remains a lingering sore that refuses to heal. Besides, there seem to be few playwrights around writing interesting plays about Rwanda, for example, or audiences clamoring to see them. 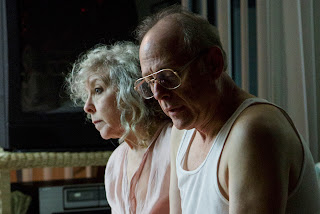 
In Mr. Margulies’s play, written in 1988 but not premiered until 1995, when its run was cut short by an actor’s unexpected departure, Max (Mark Blum) and Lola (Kathryn Grody) are an aging, Yiddish-accented Jewish couple from Brooklyn who have been trying to escape their wartime memories, while simultaneously reliving them, ever since they emigrated here. They’ve raised a daughter, Debby (Diane Davis), seen as the product of their horrendous experiences, Lola’s in the Bergen-Belsen concentration camp, Max’s as a fugitive hiding out in the woods. Debby, a morbidly obese, mentally unstable (but not stupid) woman has become such a burden that Max and Lola have slipped silently out of Brooklyn to leave her behind so they can occupy a condo they’ve bought in Florida and live out their retirement in peace.


The futility of this dream starts coming into focus when they have to stay in a model apartment while their own condo is being finished. The model, you see, is a fake, meant only for show, and about the only thing that works are the lights, toilet, and sofa-bed. The TV has no tube, the fridge has no outlet, the ashtray and candlesticks are glued down. Moreover, unlike the one-bedroom place Max and Lola bought, this one is a studio.  But, for all their disappointment, Max and Lola are survivors; they’ve seen far worse and are ready to accept their lot for a few days when—bam—their idyll is instantly destroyed by the unwanted intrusion of Debby, loud, vulgar, and prone to spouting stories laced with Nazi references: she’s left her institution and is off her meds.
Diane Davis, left, and Kathryn Grody. Photo: James Leynse.


Lola tries to remain calm and motherly, for all her distress, and does her best with the obstreperous Lola, who got their address from a neighbor and drove down on her own. Max, though, keeps trying to hide from his responsibilities; he escapes to bed, as if he could hide there silently, the way he did from the Germans. But Debby is only one unwelcome presence in the couple’s search for peace, for soon the apartment becomes a refuge for Neil (Hubert Point-du Jour), a homeless black man who is Debbie’s lover, and who begins to have noisy sex with her right after he arrives; while not a dangerous presence, he is a disruptive one, and does physical damage to the pristine apartment Max and Lola were told to take good care of.


The play lurches forward in ominous starts and stops, with brief blackouts interrupting scenes that resume only minutes later. All takes place in the middle of the night, allowing the headlights of passing vehicles to occasionally flash behind the vertical blinds. Despite the sitcom atmosphere of Max and Lola’s arrival in the sham apartment, an ominous mood creeps in, aided immeasurably by Keith Parham’s lighting and Josh Schmidt’s sound effects and music. The apartment, designed by Lauren Halpern, is a perfect replication of a generic, white-walled Florida condo, which somehow seems luxurious to Max; it gradually assumes the feeling of a prison from which Max and Lola can’t escape, just as they can’t abandon the horrors of the war.


As we learn about Debby’s relationship with her parents, we see that she’s the living embodiment of what they went through, her obesity a symbol of all the horrible stories with which they’ve filled her through the years. "They're all inside me. All of them. Anne Frank. The 6 million." (Lola and Max question just who's responsible for their grotesque offspring.) These stories, in fact, appear to have become a family tradition, as witness the long monologue in which Lola recounts to Neil her allegedly close relationship with Anne Frank, on whose famous diary Lola says she had a big influence. As she tells this fictionalized account, we see that it has been told many times, in precisely the same words, since Debby is able to recite them verbatim along with Lola or to help spur her memory. Ironically, when Lola is finished, Neil reveals he has no idea at all who she’s been talking about.


There’s another character involved as well, Deborah, the daughter Max had with a previous wife and lost during the war; he fantasizes her as a warm, lovely, caring young woman ministering to his needs. (Debby, at one point, reviles Max for giving her the name of his dead child, another instance of Max’s clinging to his past suffering.) At the ambiguous conclusion, Deborah speaks softly over Max as he lies unmoving (might he be dead?) in a recliner. In an excellent display of virtuosity, Ms. Davis plays both the manic Debby and the composed Deborah, making rapid changes back and forth between a realistic fat suit and a simple blue dress.


Despite the high marks accorded this revival by a majority of critics, I’m not quite ready to go that far myself. Theatre A at 59E59 (which contains two other venues, B and C), is a shoebox shaped theatre with 15 steeply raked rows. For whatever reason, my seat was in row O, the last one, and, even in this smallish theatre, viewing the stage was like looking at it through the wrong end of a telescope. (Because of the auditorium’s steep rake, I learned only from someone else that the set had a realistic stucco ceiling.) Moreover, Evan Cabnet, whose staging is otherwise fine, has directed the actors, especially the otherwise admirable Mr. Blum and Ms. Grody, to speak many of their lines in quiet, almost whispered (but not stage whispered) tones; while I might have relished this approach were I sitting closer, too much of what they mumble borders on the inaudible.


THE MODEL APARTMENT, which clocks in at around 80 intermissionless minutes, is a noteworthy play being given a generally worthwhile revival. Just make sure you’re sitting close enough to hear it; if not, and you have hearing issues, ask for an infrared listening device. And be sure it works, since the one my wife used was, like so much else in Max and Lola’s temporary abode, no more useful than its TV and refrigerator.