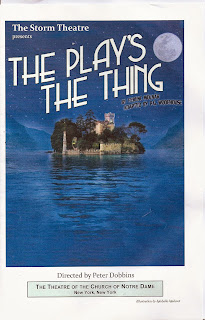 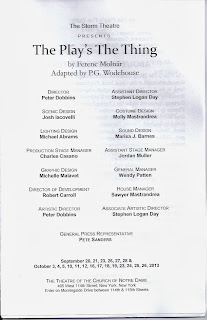 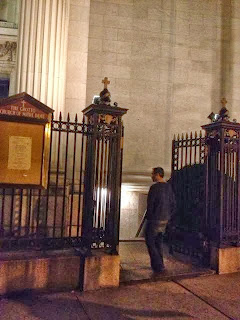 The entrance to the Storm Theatre, in the basement of the Cathedral of Notre Dame, Morningside Heights.


During the 1920s Budapest was a major European theatrical hub, its leading playwright being the Hungarian Jew Ferenc Molnar. His plays enjoyed an international reputation, the best known probably being LILIOM, the inspiration for Rodgers and Hammerstein’s classic musical CAROUSEL. Rivaling it in popularity has been THE PLAY’S THE THING, which—as adapted by P.G. Wodehouse—had its world premiere in Great Neck, NY, in 1926, shortly before opening on Broadway for a hit-length run of 313 performances. It has subsequently had several New York revivals, both on and Off Broadway, two of which I vaguely recall seeing. New York Times critic Brooks Atkinson wrote of the 1926 staging: “the enjoyment is not always constant, but Molnar’s complete relaxation, his remarkable understanding of situation, his coruscating dialogue, his sly innuendo refresh and exhilarate.” Seeing it now at the tiny Storm Theatre, located in the basement (I’m tempted to say catacombs) of the imposing Cathedral of Notre Dame at 114th Street and Morningside Drive, does not inspire me to pen a similar encomium, although the Storm deserves support for resuscitating the play as part of its Molnar project, which plans to revive two more of the playwright’s plays.

Alexis Kelley and Brian Linden. Photo: Michael Abrams.
The play (THE PLAY AT THE CASTLE in Hungarian) takes place in a count's castle on the Italian Riviera where star actress, or prima donna, as she is called, Ilona Szabo (Alexis Kelley), is staying, and which is visited a day earlier than expected by leading Budapest playwright Sandor Turai (Joe Danbusky), his collaborator, Mansky (Andy Allis), and the handsome young composer Albert Adam (Jeff Kline), in love with Ilona. The walls are so thin that this trio overhears the actress in a compromising conversation with the romantic actor, Almady (Reginald Owen), a married man with four children. Although Ilona soon dismisses Almady, Albert is driven to distraction with jealousy, but the gifted Sandor, who needs Albert to write music for his new play, concocts a scheme whereby, overnight, he writes a one-act to be performed at a castle entertainment. In it the dialogue from the illicit lovers’ conversation is employed to convince Albert that what he overheard was actually one of Sandor’s plays being rehearsed and not the conduct of an illicit encounter. Two other characters take part in the play: the buffoonish Mr. Mell (James Henry Doan), who struggles to stage manage the evening's entertainment, and the dryly solicitous Johann Dwornitscheck (Spencer Aste), the accommodating footman who seems a direct steal of the Waiter in Shaw’s YOU NEVER CAN TELL.


Presented in the three-quarters round under the direction of Peter Dobbin, the low-budget set, designed by Josh Iacovelli, is unable to do more than hint at the glamor of what should evoke a lavish environment. This is one of those plays whose elegance demands an exquisite physical representation. The steps and platform at one end of the room, replete with medieval arch and glassless. arched window openings, was seen in last season’s LE CID; it’s too bad that Michael Abrams’s lighting can’t keep the shadows cast by the arch and windows from being visible on the sky drop. Most of the men dress in a semblance of 1920s formal evening wear or, during the day, off-white linen suits; the one area where the revival approaches the required gossamer beauty is Ilona’s costumes, attractively designed by Molly Mastrandrea.


THE PLAY’S THE THING (available as a musical, ROUGH CROSSING, by Tom Stoppard) is often called a farce, and, at one time, it was also considered a risqué piece worthy of adult enjoyment.  Today’s audience would barely consider the material even mildly naughty but it’s still possible to detect vestiges of what might once have been hilarious here. I wish I could say, though, that the show I viewed raised more than an occasional titter, a word that reminds me of how Almady’s overheard description of what sounded like Ilona’s breast turns out to have been merely a reference to her shoulder. Are you tittering yet?
Although it’s hard to appreciate the play’s charm and wit without the presence of veteran players gifted at portraying urbane ladies and gents stuck in some ridiculous situation, the play does wake up, if belatedly and all-too-briefly, during the last act’s fast-paced, expertly constructed play-within-the-play. In it, Molnar creates a challenging give-and-take between the masterfully manipulative Sandor and the desperate Almady, who must avoid his indiscretion being found out by his wife.


One of this play’s most admired features is its Pirandellian playing with the difference between illusion and reality, or between authenticity and artificiality; ironically, too much of the acting seems fake (except, as in the play-within-the play, when it’s supposed to be), and few performances rise above competence. Sandor is played by Mr. Sandusky with an appropriate combination of smugness and pseudo-sophistication, but it mostly remains on the same level throughout; he captures Sandor’s superior intelligence, but fails to make it continually diverting. Technically, the most challenging role is that of Almady, whom Sandor wishes to ridicule for his extramarital canoodling; during the long play-within-a-play scene—meant to satirize the florid style of 19th-century dramatist Victorien Sardou—Almady complains about being forced to speak the names of people and places containing multiple, hyphenated components. Mr. Linden (an ectomorph who, sorry to say, is anything but a matinee idol) manages to run off these memory-challenging tongue-twisters with admirable precision and timing; like so much else in this production, however, his work is earnest but fails to roll ‘em in the aisles. Ms. Kelly as Ilona is very attractive, but her voice is often shrill and her acting superficial.


To sum up: if the play’s the thing, so must be the performance.
Posted by Samuel L. Leiter at 6:53 PM