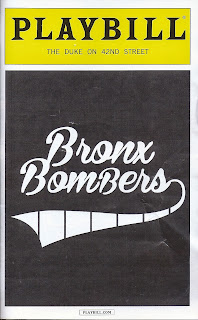 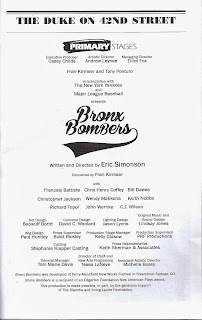 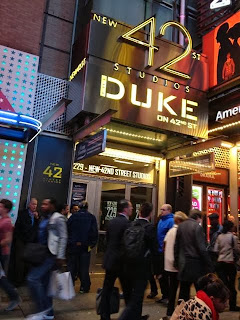 
The New York Yankees have been the subject of movies, TV shows, and even Broadway musicals. One of the most respected iterations of Yankee drama was the 2007 TV miniseries, The Bronx Is Burning, based on Jonathan Mahler’s book, Ladies and Gentlemen: The Bronx Is Burning, which covered the incredible 1977 championship season, focusing not only on the on-field action but on the off-and-on field warfare between feisty manager Billy Martin and the newly acquired slugger Reggie Jackson, with owner George Steinbrenner smack dab in the middle of the fireworks, which also included the city’s myriad social problems. Now Eric Simonson has taken that 1977 season and turned it into a play (“conceived by Fran Kirmser”), which he also directed, and which is playing at the Duke Theatre on 42nd Street. Mr. Simonson and Ms. Kirmser were responsible for two previous sports-centered plays, LOMBARDI and MAGIC/BIRD, both of them more effective than BRONX BOMBERS.


The Duke is one of New York’s variable theatre spaces, a large room allowing for multiple seating arrangements. In this case the seats have been placed around all four sides of the square space, with two or three rows on three sides and five rows on another. Overhead, surrounding the space, designer Beowulf Boritt has placed replications of those iconic Yankee Stadium mezzanine arches, but the acting area is reserved for interior scenes, none on the playing field itself. The play begins in a room at the Boston Sheraton in June 1977, moves to the bedroom of Yogi (Richard Topol) and Carmen Berra (Wendy Makkena), shifts to a large banquet table in the Berra’s home, and ends in the Yankee’s locker room in September 2008, on the last baseball day at Yankee Stadium before it was torn down to be rebuilt.


As the audience enters, it hears Bill White’s radio broadcast of a June 1977 game at Fenway Park; when the names of Mickey Rivers and Willie Randolph, among others, are mentioned, Yankee fans (among the only theatergoers who will eat up this over-sweetened play) will surely get an injection of nostalgia, but they are likely soon to be disappointed. (Allowance can be made for the anachronism of having present-day announcer Suzyn Waldman ask the audience to turn off its cell phones.) As the broadcast continues we hear about a dugout fight between manager Billy Martin (Keith Nobbs) and right-fielder Reggie Jackson (Francois Battiste); this spark ignites the play.


In that Boston hotel room we meet Martin, Berra, Jackson, and team captain Thurman Munson (Bill Dawes); also occasionally present is a room service waiter (Christopher Jackson). Berra, the Hall of Fame catcher, who was then a coach, is trying to reconcile the feuding Martin and Jackson, whose conflict began when Martin pulled Jackson from the field when he thought the outfielder wasn’t hustling. Martin, tearfully frightened of being fired, is a volatile firecracker dressed in black cowboy gear and speaking in a Southern accent (although born and raised in Berkeley, California), while Jackson is an arrogant dude rigged out, as was his style, in a tight-fitting maroon suit making him look more like a pimp than a superstar. (The spot-on costumes are by David C. Woolard.) Berra, probably more famous today for his unintentional mangling of English syntax than for his catching brilliance, is the frustrated peacekeeper, hoping to keep Jackson from venting to the media. Every now and then, Munson, presented as another voice of reason, puts his two cents in, but not without being irritated by Jackson’s raising questions about their relative salaries. Wherever possible, playwright Simonson injects information well-known to baseball fans, such as Munson’s recent purchase of a plane; later, news of his eventual death in that plane is wrung for tears.


So far, so good. A straightforward drama about a personality clash among super-famous, super-wealthy, and super-egotistic sports figures, with flaring tempers and smartass attitudes. Issues of race ("I'm a nigger to you," shouts Jackson to Martin) and money are brought to the floor and we sense the potential for interesting drama, even if the material is, for fans, overly familiar. Berra is doing his best to argue that personal issues must not interfere with the team’s unity, especially since the Yankees have a pristine tradition to uphold.


But then the playwright shifts gears sharply, taking us into Berra’s private life, and giving him an ulcer attack that brings on a dream sequence (cue the thunder, lightning, and fog) in which his wife, Carmen, hosts a dinner party around a large banquet table for Mickey Mantle (Mr. Dawes); Elston Howard (Mr. Battiste), the first black Yankee; Babe Ruth (C.J. Wilson); Lou Gehrig (John Wernke); Joe DiMaggio (Chris Henry Coffey); and Derek Jeter (Mr. Jackson. All, except for the overly good-looking, blue-suited DiMaggio, wear the carefully recreated uniforms of their eras; eventually, Jolting Joe changes into his uniform as well. These legendary dream figures, alive, dead, and one only three-years-old in 1977, represent the wide variety of Yankee personalities that make up the team’s legend, from flamboyant to reserved. While there to underline the idea that big egos, argumentative personalities, and monetary concerns (before and after free agency) are nothing new in the Yankee universe, these famous figures spend most of their time trading well-known anecdotes about their lives, and we even see Gehrig (whose close relationship with his mother is endlessly referenced) gradually succumb to the disease now known by his name. Unable to leave out anything that might bring a lump to your throat, Simonson even throws in a reference to 9/11.


The play becomes even more schmaltzy in the last scene, when Yogi is interviewed by a reporter (Keith Nobbs) on the occasion of the last Yankee game at Yankee Stadium, and he asks Derek Jeter to deliver the speech he, Yogi, had been asked to give on the field. It is Jeter’s actual voice we hear over the loudspeaker as the play draws to an end, as the legends gather around the large Yankee logo on the floor, with Lou Gehrig standing in its center. The play has gone from a dramatization of the personal conflicts of 1977 to a sentimental tribute to the Yankees legend.


One of the biggest problems in doing a work with such recognizable celebrities is finding actors who resemble them. It is rare that producers can cast someone as close to the original as, for example, Ray Fisher playing Muhammad Ali in FETCH CLAY, MAKE MAN. Fans familiar with the faces and body types of the players enacted in BRONX BOMBERS are likely to feel let down. Francois Battiste bears a slight facial resemblance to Reggie Jackson, but is much slighter and shorter than the real McCoy; it's hard to believe he could ever have hit over 500 home runs. Mr. Battiste looks nothing at all like Elston Howard, his other role. Happily his acting compensates for the discrepancy to some degree, and he does manage to express Jackson’s oversized personality, intelligence (an IQ of 160, he tells us), and huge self-image (he refers to himself as “the immensity that is Reggie Jackson”).

Keith Nobbs faintly resembles Billy Martin, but he is not only far too young, he is much too short, looking more like a batboy than a ballplayer. Richard Topol (replacing Joe Pantoliano, who left because of “creative differences”) struggles valiantly to embody Yogi's  rough voice and clownish mannerisms, but his shuffling gait makes him seem more like someone with an incontinence problem than a onetime catching great. Mr. Simonson fills his mouth with so many Yogi-isms ("I made too many wrong mistakes back then") we may never have to watch another Aflac commercial.

Bill Dawes is sufficiently close to Thurman Munson and Mickey Mantle to get away with his impersonations, and C.J. Wilson brings so much boyish energy to his portrayal of the Babe that we can forgive how different he is from the model. Christopher Jackson is believable enough as Derek Jeter, but Chris Henry Coffey's movie-star looks have nothing about them to suggest DiMaggio, nor does John Wernke's All-American appearance create anything like the impression made by Lou Gehrig's luggish mug.


Maybe rabid Yankee fans, like my cousin Ronnie and his son, Adam, or my friend Jerry from the Upper West Side and my friend Jerry from Howard Beach, would find something to like in this unsatisfactory effort at pin-stripe glorification. The material is rife with explosive possibilities, but—and I say this not because I happen to be a Mets fan—the payload carried by BRONX BOMBERS--like the way the Yankees ended the season this year--goes off more with a whimper than a bang.
Posted by Samuel L. Leiter at 9:07 PM