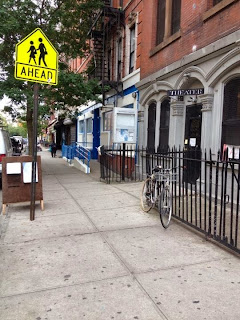 
An interesting, if not especially scintillating, group of American plays, most of them long forgotten, has been hitting the stages of New York this season, mostly Off Broadway. Among them have been THE HENRIETTA, THE SILVER CORD, THE TWO-CHARACTER PLAY, PHILIP GOES FORTH, NATURAL AFFECTION, and, of course, THE GLASS MENAGERIE, all reviewed on this blog. The tiny Metropolitan Playhouse, in the East Village on E. 4th Street between Avenues A and B, a specialist in such revivals, recently resuscitated Bronson Howards’s late 19th-century THE HENRIETTA, and has now mounted Rachel Crothers’s 1910 proto-feminist play, A MAN’S WORLD, an interesting relic that bears the marks of its age but yet has some worthwhile things to say about male-female relationships that still hit their mark. Rachel Crothers was once one of America’s foremost dramatists, her intellectually stimulating plays including SUSAN AND GOD (1937), which starred Gertrude Lawrence. The Metropolitan staged A MAN’S WORLD in 1999, so this is their second go at it. I didn’t see their first production, but was disappointed by the second.


A Greenwich Village boarding house in 1909 is the home for a diverse, if stereotypical, group of mostly artistic bohemians (not unlike those in the current revival of PHILIP GOES FORTH): Émile Grimbeaux (Dane Dandridge), a French artist; Clara Oakes (Kendall Rileigh), a bedraggled female painter of portrait miniatures; Fritz Bahn (Perri Yaniv), a German musician; Wells Trevor (Christopher Goodwin), a playwright; Leona Brune (Regina Gibson), an operatic diva; Frank Ware (Kathleen Dobbs), a female novelist; and Michael Gaskell (Kelly Dean Cooper), a writer. Also resident and central to the plot is an 8-year-old boy, Kiddie (Michael Fader), the adopted son of novelist Frank Ware, who writes socially aware books about downtrodden women. Her name suggests both the character’s candidness and, it seems natural to assume, something of her gender consciousness, although she’s straightforwardly heterosexual.


Here’s the principal issue: Frank has raised Kiddie as her own after the child’s mother died during childbirth when Frank was living in Paris. Fritz is in love with Frank, and the diva, who loves Fritz, is jealous, moving her to speculate that Frank is the child’s biological mother and that Michael Gaskell, who also loves Frank, is the father. The reason for the suspicion is that one of the miniaturist’s paintings shows how much alike Kiddie and the man look around the eyes. No need for then nonexistent blood or testing; a tiny painting is enough evidence to seal the case. As the melodramatic developments reach their apex, Frank, chilled by the possibility, confronts Michael; he, despite all his upstanding virtues, is forced to admit to having been the lover of the boy’s mother, whom he abandoned and whose friendship with Frank he’s shocked to discover. (The very long arm of coincidence, without which melodrama wouldn't exist, rears its head again.) Michael, quick to condemn women who have lost their virtue in such circumstances, is adamantly opposed to expressing any remorse for his part in the affair. This is, as he says, a man’s world, and that’s not an opinion, it’s fact, always was and always will be. The double standard has never been expressed more clearly. He argues vociferously for Frank to overcome her revulsion at his position, and is flabbergasted at the decision she arrives at regarding their relationship.


Until the scene with Frank and her lover, the play, for all its occasional highlights, meanders along, somewhat lamed by a troupe that can do little more than play the surfaces of their characters, and with a leading lady who, while attractive, has a thin, piping voice that belies the strength Frank needs to convey. Nor do fake French and German accents help. The only performer whose presence has any vivacity or smidgen of truth is Ms. Gibson as the opera singer; she actually can sing and does so to cover the scene changes—performed by the actors—as Fritz, referred to as a violinist, accompanies her on the piano.


Sidney Fortner’s costumes are satisfactorily in period, despite the company’s low budget, while Alex Roe’s set, which seems to be the same one used in THE HENRIETTA, is a green-walled interior that remains unchanged throughout, regardless of the action moving to different rooms. Furniture shifts help to alter the appearance, an accommodation we can accept, but director Michael Hardart makes an odd choice when he neglects to have the furniture changed during the intermission. When act two begins, it does so with an extended shifting of furniture that we are forced to watch as if the director thought it so interesting it was worth a scene of its own. It’s not; it doesn’t.  And it wastes time in a play running well over two hours.


This revival of A MAN’S WORLD is mainly for American theatre buffs who are interested in seeing such historical artifacts brought to life, even if it’s only the semblance of life. Those interested in the way the rising feminist movement was reflected in drama over 100 years ago will also find things to ponder here. Later in the day, I saw a new play called feeling. at the New Ohio Theatre. If the acting at the Metropolitan only had the depth and imagination of the company at the New Ohio, A MAN'S WORLD would have appealed to more worlds than those I've noted.

NOTE:  coming up later today, reviews of feeling.,  JERICHO, and A NIGHT WITH JANIS JOPLIN.
Posted by Samuel L. Leiter at 10:14 AM