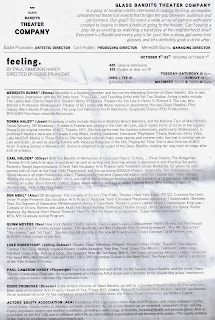 A wide-open stage, a wall of white vertical blinds running on a slant from upstage right to left, and an open doorway for entrances and exits. A double bed. A kitchen table and chairs up left. A coffee table and chair down right. Large spotlights on the floor at either side. A young woman, Emma (Meredith Burns), lies crumpled on the ground. A man stands there with a suitcase. “I do love you,“ he says before walking out. Blackout. So begins feeling. , a sometimes creepy, memorably well-acted, but not fully satisfying psychological thriller presented by the Glass Bandits Theater Company at the New Ohio Theatre. 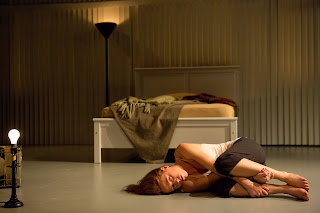 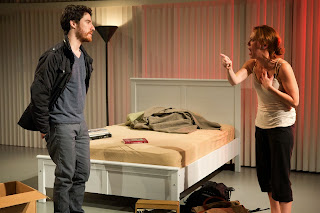 Ben Mehl and Meredith Burns. Photo: Hunter Canning.
Three more brief, slowly done scenes follow, all ending in blackouts. Two are silent but, in one, Emma, a doctoral student, calls in to her college teaching job complaining of a stomach bug. These scenes set us up for the arrival of Emma’s brother, Oliver (Carl Holder), a gay grad student, who is worried about her and comes to help out; Emma is not suffering from a bug, but is sunk into a deep depression because her boyfriend, Alex (Ben Mehl), seen in the first scene, has left her after a 9-year relationship. By now, the smart director, Eddie Prunoske—in collaboration with set and lighting designer Josh Smith, costume designer Andrea Hood, and, most especially, Erik T. Lawson, who created the atmospheric sound effects (could those be bones being crushed?) and original music—has established an ambience of dread as we contemplate Emma’s collapsing state of mind. On the one hand, she tries to shrug off her gloominess and to deny she needs her brother’s care; on the other, she gradually displays signs of an obsession that possesses her and that she struggles to rationalize to those who care about her.


Meanwhile, Emma tries desperately to convince her seriously skeptical dissertation adviser, Janet (Donna Haley), that she simply must add a chapter on Dahmer to her dissertation, although Janet insists it's totally irrelevant.  In an attempt to legitimize her Dahmer interest in academic terms, Emma explains: “I'm interested in portrayals of premeditated violence committed by homosexuals, differentiated by both gender and sexuality of author.”


Her behavior continues to grow more erratic, yet she is able to somehow stand outside of herself and observe her own emotional breakdown, indicated by her taking cell phone pictures of her face after she’s had some traumatic experience. Janet and Oliver do their best to shake her out of it but to no avail. Finally, she invites a 19-year-old student she's been advising, Ben (Quinn Meyers), to her apartment, where she greets him in red herring fashion, and what happens during their encounter takes Emma’s desperation in an unexpected direction. 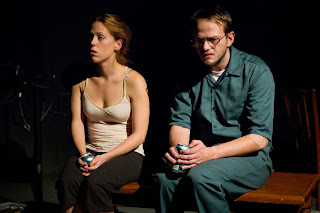 
Ultimately, however, Dahmer’s imaginary presence wears out its welcome and the play loses its edge as a potential bloodletter (Dahmer himself has been neutralized, since he isn't real), becoming instead a case study in a woman’s psychological disintegration following a romantic breakup. The writing is always intelligent but the dramatic arc fizzles during the overlong Dahmer scenes and the play, even at 90 minutes, begins to drag; if 15 minutes were shaved off, the evening would profit greatly. At one point, I wrote a note: "Where is all this going?" We are left as puzzled by the Dahmer connection as Oliver and Janet, although the playwright may be trying to equate Dahmer the presumed demon, who killed all those people, with the demons that can possess any human being against their will; in other words, just being human can turn you into a demon. As Emma tells Dahmer:  “I hate that you are a human being. That there is no such thing as demons. That we share the same emotions. Do you know how hard that is?” Perhaps Alex, whose leaving triggered Emma’s condition, is the demon who truly possesses her.


Whatever the explanation, the catalyst that makes this play worth viewing is the acting. I can’t imagine how a lesser cast could glue an audience to the script as this one does, especially the riveting Meredith Burns, whose sometimes neurotically rapid speech, occasionally too rapid to follow easily (which, in this context, is okay), self-justifications, and irrational reactions, always while fighting to seem reasonable and in control, make this one of the best performances I’ve seen this season. She is teamed with a superb supporting cast, beginning with Carl Holder, whose affect as the friendly gay brother, quick with a quip, goes far deeper than any stereotype. His totally sincere wish to help Emma, his frustration at her resistance, and the confrontation they have when her preoccupations prevent her from giving full attention to his own academic work, is fraught with raw, honest friction.  Donna Haley, as Emma’s seriously concerned mentor, trying hard to be supportive but maintaining her necessary role as an authoritative advisor, brings total believability and depth to what could easily be a hackneyed role, while Ben Mehl’s Alex is fully credible as a guy conflicted in his need to separate from the woman he still loves. Luke Robertson brings just the right quality of offbeat friendliness to Dahmer, making him a combination of android and human that embodies both this maniac’s insanity and his humanity. In the play’s smallest role, Quinn Meyers, as Emma’s student, handles a role that could easily come off as shallow and uninteresting, capturing just the right touch of vulnerability to make what happens to him convincing. My companion felt he nearly stole the play.


feeling. (God, I hate typing these pretentious lower-case titles; see stop.reset.) has lots of feeling, but without talented actors to embody them, this play might never have gotten off the ground. Regardless of my reservations about the play, about which others may feel differently, I still recommend seeing it for an example of the kind of thoroughly grounded acting one sees too rarely on local stages.
Posted by Samuel L. Leiter at 5:49 PM