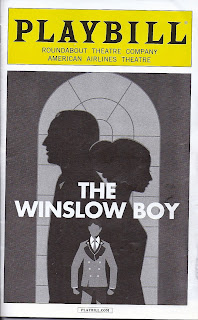 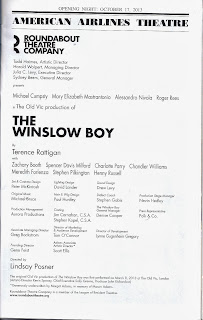 Ever since Greek tragedy gave us Aeschylus’ EUMENIDES, courtroom dramas have provided theatergoers with suspenseful, thought-provoking plays. Classics like THE MERCHANT OF VENICE and modern plays like WITNESS FOR THE PROSECUTION, INHERIT THE WIND, THE CAINE MUTINY COURT MARTIAL, and A FEW GOOD MEN hold audiences in thrall with their combination of battling lawyers and baffling crimes. Next week Broadway will offer the first dramatization of a John Grisham novel, A TIME TO KILL, which hopefully will add another to the list.

I mention these because the Roundabout Theatre’s revival of Terence Rattigan’s 1946 THE WINSLOW BOY has opened at the American Airlines Theatre. This British play, which first appeared on Broadway in 1947, starring Frank Allenby as Sir Robert Morton and Alan Webb as Arthur Winslow, has all the makings of a rousing courtroom drama, except it never steps foot in a courtroom. Instead, it remains all the while in the home of Ronnie Winslow, the 13-year-old boy who is kicked out of the Royal Naval College in 1912 for allegedly stealing a 5-pound postal order, and who, in 1914, eventually goes to court against the British Crown in a David and Goliath case to clear his name. The internationally-watched incident was of great importance in symbolizing the rights of the average man. (The play is based on a true story about a boy named George Archer-Shee, who died at Ypres in World War I.)


THE WINSLOW BOY, which has been made into two films--the last one, directed by David Mamet, produced in 1999--tells of how the boy’s expulsion inspires his defiant father, Arthur Winslow (Roger Rees), to take on the British government in his fight to prove his son’s innocence, even when, over the course of two years of legal fighting, it causes his family irreparable financial, physical, and emotional damage. Unfortunately, all the arguments in the House of Commons to allow the case to go forward (the government considers the Naval College, as a representative of the Admiralty, to be infallible), culminating in the king’s signing a “petition of right,” with the words, “Let right be done,” and all the actual trial activity is reported in the Winslows’ living room, secondhand; the only scene approximating the excitement of a trial is when Sir Robert Morton (Allesandro Nivola), the brilliant, high-powered attorney and opposition member of the House of Commons, asked by family solicitor Desmond Curry (Michael Cumpsty) to consider taking the case, cross-examines Ronnie (Spencer David Milford) to determine for himself the boy’s guilt or innocence. When the actual trial concludes, most members of the family are not even present at it (Ronnie is at the movies), and the news is delivered by Violet (Henny Russell), the maid, like a Greek messenger, albeit a comic one.
This is THE WINSLOW BOY’s first Broadway revival, although it was given a previous Roundabout production in 1980, starring Remak Ramsey as Sir Robert, when the company was still ensconced in a small Off-Broadway basement theatre; it was a fine production I still remember. The current production, given the kind of physically impressive  and professionally polished Broadway presentation that the Roundabout could not provide in 1980, starts off well, with a cast including Mary Elizabeth Mastrantonio as Grace Winslow, Ronnie’s loving mother, who eventually begins to doubt the wisdom of keeping the case alive; Zachary Booth as Dickie Winslow, Ronnie’s fun-loving older brother, a student at Oxford; Charlotte Parry as Catherine Winslow, Ronnie’s 30-year-old, leftwing, suffragette sister; and Chandler Williams as John Watherstone, Catherine’s straitlaced fiancé, who initially supports the family’s case but proves to be spineless when his conservative father threatens to cut him off if the Winslow case proceeds. All have convincing accents (Ms. Parry, and Messrs. Cumpsty and Rees are British) and suitably convey the style and atmosphere of Edwardian England.
The action transpires in the expansive, green wall-papered drawing room of a house in Kensington, provided by Peter McKintosh with all the period appurtenances; there is a curtained window area at stage right, and a large set of white folding doors upstage center leading to a dining area. Mr. McKintosh also is responsible for the attractive, minutely researched costumes, and David Lander’s lighting capably captures the changing weather and times of day.


The production is in the hands of British director Lindsay Posner, whose London staging at the Old Vic so impressed Roundabout producer Todd Haimes that he brought Mr. Posner here to restage it with a New York cast. The energetic direction gives the play the aura of a high comedy in the Shavian mold, but eventually the serious stuff must intrude on the good spirits, although the comic tone is never far behind. Melodrama is present, too, when Mr. Nivola does his cross-examination of Ronnie. Suddenly, Mr. Nivola, dressed in a barrister’s formal black clothing, becomes Perry Mason on steroids, circling in for the kill, with dramatically swooping vocal intonations and grandstanding gestures that suggest we’re somewhere back in the days of Sir Johnston Forbes-Robertson.


Mr. Rattigan mingles historical accuracy with dramatic license, but does his best to  consider issues of justice and right; still, he never forgets that he’s writing for a West End (or Broadway) audience and is unable to abandon his romantic subplot. While he emphasizes the toll that the lawsuit takes on the Winslows, all of whom make great sacrifices on its behalf, there is too much conventional concern with Catherine’s love life and her liberal positions on women’s rights; this material is of historical interest but slows the play down. Sir Robert, a Conservative, is opposed to Catherine's ideology, but, since he is also a handsome bachelor, it is, of course, impossible for the dramatist to ignore the gleam of a potential romance between him and this woman he now finds remarkably articulate and capable of a law career of her own. So we have long scenes picturing Catherine and John’s love affair, John’s feckless abandonment of Catherine, Catherine’s being proposed to by Desmond, and Sir Robert’s expression of interest, most of the latter coming after the lawsuit is settled and therefore being truly anticlimactic. Since the play runs over two and a half hours, the dramaturgy begins to seem tiresomely longwinded.


There is also a dramaturgic elephant in the room during a long second-act scene when all sorts of discussions and arguments are going on while poor Ronnie falls asleep on the couch, placed at dead center. He may be 15 but he’s talked about as if he’s an infant, with his mother carrying on about putting him to bed in his room. Meanwhile, despite all the hullabaloo around him, he sleeps like a baby, defying plausibility and forcing me to keep pressing my suspension of disbelief button. Perhaps if there had been a separate couch for him to sleep on in an upstage corner, or if the actors had been directed to speak as if they cared about his sleeping presence the playwright's choice might not be so distracting.


The acting is generally fine, if sometimes too broad, but I most appreciated Michael Cumpsty’s friendly, shy, and gently comical Desmond, with his self-deprecating honesty and amusing facial expressions. Ms. Mastrantonio is splendid as Ronnie’s warm and lively mother, and Mr. Rees conveys excellently Arthur’s pride, resilience, and stiff upper-lip Englishness, as well as the pain of his physical ailments; he does, however, tend to mug just a wee bit too much. Mr. Nivola is too actorish to be convincing, but Ms. Parry brings sincerity and intelligence to Catherine, without descending into smugness. As Ronnie, Spencer Milford Davis is suitably juvenile and angelic, although in that namby-pamby way so typical of British boys in movies from the 1930s through the 1950s.


THE WINSLOW BOY is solid, if conventional, Broadway fare in its middlebrow combination of high-minded liberalism, drawing-room comedy, romantic relationships, and suspenseful legal drama. It is handsomely presented and, for the most part, engagingly performed. Its contrivances are apparent and its reliance on a messenger to describe the courtroom theatrics at its heart may be artistic drawbacks, but Rattigan was a talented playwright who knew how to hold an audience with a well-made mix of comedy and drama. My theatre companion thought it was the best thing she’d seen with me, which either speaks very poorly of the other plays she's attended or speaks very highly of this one.
Posted by Samuel L. Leiter at 8:04 PM