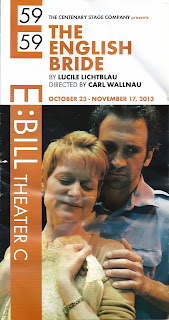 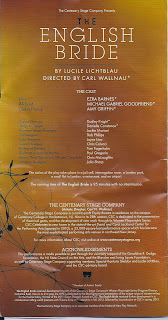 THE ENGLISH BRIDE, playing in the tiny Theatre C at 59E59, could as easily be called BETRAYAL as the Pinter play now on Broadway. Its story, of course, is completely different but it similarly deals in lies and deception, and in a betrayal that goes way beyond the philandering shenanigans of Pinter’s people. Based on an actual incident that occurred in London in 1986, this award-winning work tells of Eileen Finney (Amy Griffin), a homely, 40ish, working-class British woman from Leeds who is falls in love with a nice-looking young Palestinian refugee named Ali Said (Michael Gabriel Goodfriend). Ali promises to marry the considerably older, love-starved Eileen, whom he prepares to accompany to Israel where he will introduce her to his parents prior to their marriage. But Ali is actually an incipient terrorist: an El Al plane with 300 people on board and a suitcase carrying explosives will soon enter the picture.


Seventy-eight-year-old playwright Lucile Lichtblau examines the background to Ali's potentially horrendous plot by having him and Eileen interrogated by Dov (Ezra Barnes), an Israeli agent of Mossad. We watch as Dov questions both Ali and Eileen, although never together, and also see the relationship between the lovers enacted as physical expressions of the testimony they provide. The dramaturgy mixes straightforward dramatic scenes with considerable direct address. As the interrogation proceeds, the web of truths, half-truths, and outright lies revealed, not only by the suspects but by the agent, grows increasingly complex, and at the end, while we think we know precisely what happened, and who these people are, we cannot be completely sure of anything. At the end, Dov wraps everything up, saying that, in his business, he’s used to never knowing exactly what transpired. “Truth mixed in with lies, love with hate. Fear and shame often conquering our noblest ideals. Nothing is plain and simple. Everything is ambiguous. . . . I must remember that most of what people say is untrue.” At this point, he closes out the play with a salient piece of information that reveals how something crucial we may have accepted in the play as true is not.


As Dov, Ezra Barnes has the difficult task of playing the friendly questioner who casually gains his detainees’ trust while simultaneously keeping them off balance by toying with veracity. No matter how honest or sincere the answers he gets seem to be, there’s always some lurking falsity in them, and he must use all his skills to dig out the truth by combining acceptance with suspicion; almost always, however, his inquiry is supported by his knowledge of much more than he lets on. My theatre companion didn’t think he pulled it off, but I was more approving. I liked Mr. Barnes's soft-voiced ability to seem friendly and caring while always maintaining an undercurrent of the power at his disposal.


I wish Mr. Barnes had a more convincing Hebrew accent, just as I wish Mr. Goodfriend’s Arabic accent as Ali Said was better. Despite a name that seems anything but Middle Eastern, this actor looks passably enough like the character he plays, and gives a reasonably acceptable performance of this Arab terrorist, whom Ms. Lichtblau is at pains to humanize in an effort to clarify what drove him not only to attempt the bombing but to behave in such a Machiavellian way toward Eileen. His ultimate motives for becoming a terrorist, however, are left vague.


As Eileen, Ms. Griffin gives what is the most conspicuous performance in this three-person drama. Even though she’s ostensibly been duped,  Eileen is deft at hiding behind a wall of deceit. While not really homely, as called for by the stage directions, Ms. Griffin’s face has a certain comical aspect that allows us to imagine her being more plain than pretty, and she uses every weapon in her arsenal to play the role with a kind of girlish, even childlike, quality; sometimes impish, sometimes snide, sometimes clownish, and always vulnerable, she uses her pliable features to create a panoply of eye-rolling, head shaking expressions that create a convincing image of someone naïve and desperate enough to bite at Ali’s bait. Eventually, the character, with her physical and facial tics, and her sometimes overly thick (but credible) working-class accent, grows a bit tiresome, but we do feel a pang of regret when she ultimately realizes what a fool she’s been.


Carl Wallnau, who originally staged this play at Hackettstown, New Jersey’s Centenary Stage Company, capably handles the limited space in Theatre C, placing the action in one corner of the black box room, with the audience facing the stage in two sections set at right angles. Set designer Bob Phillips has covered the stage floor, with its one and two step platforming, in marbled black tile, and the action is surrounded throughout by a modest, translucent drape that allows backlight to glow through it. Chairs and a bench suffice for furniture.


Most compelling of the episodic play’s multiple scenes are those of the interrogation, while the flashback scenes that examine the budding relationship of the lovers, while absolutely necessary to our understanding of who these people are, gradually lose interest, possibly because there’s a bit too much dependence on expository narrative later in the play. Still, this is a thoughtful and well-executed work and its truths (and falsehoods) make for an interesting dramatic event.