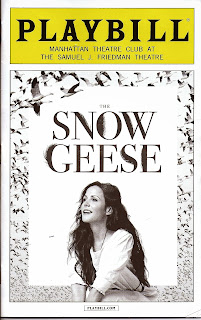 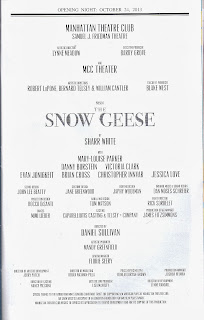 This month’s PLAYBILL carries a piece on Mary-Louise Parker, who is back on Broadway in Sharr White’s THE SNOW GEESE at the Samuel J. Friedman Theatre. It concludes with her saying, “THE SNOW GEESE feels kinda like [a] lost Chekhov play, but not in the way that it is derivative. Sharr has his own style—but it truly, truly is reminiscent of Chekhov.” The play, which Mr. White freely admits is influenced by Chekhov, is set at a hunting lodge in rural upstate New York and deals with the declining fortunes of a once wealthy family at a time when America was on the brink of a major historical event (its entry into World War I); it's named after a bird that assumes symbolic value; it features a leading lady wearing black because she is in mourning, if not for her life, than for her husband, felled by a heart attack two months earlier; it raises issues of class consciousness; a laudanum-prescribing doctor plays a central role, as does a pistol; it tells a story of a self-centered matriarch who refuses to face her family’s financial losses; and it reveals that a solution is available if only the estate is sold. If one were to go even closer into Mr. White’s Chekhovian world, other, less obvious derivations could be cited, but these should be enough to hint at the proximity of what happens within Mr. White’s Gaesling family and those in THE THREE SISTERS, THE CHERRY ORCHARD, THE SEAGULL, and UNCLE VANYA. The title, while reminiscent of THE SEAGULL, has a different meaning. According to the playwright, it refers to the family: "The way that the snow geese migrate is that they all come over in one flock and they all disappear." 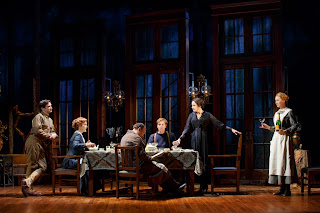 From left. Evan Jonigkeit, Victoria Clark, Danny Burstein, Brian Cross, Mary-Louise Parker, Jessica Love. Photo: Joan Marcus.
Of course, this isn’t necessarily a bad thing, as great drama has often inspired great spinoffs, but it’s risky because the effort automatically creates grounds for comparison. In the present case, Mr. White’s play falls short, not only as an homage to the Russian master, if such it might be considered, but as a play independent of any influence from a specific playwright. Unlike Mr. White's excellent THE OTHER PLACE, of last season, which provided Laurie Metcalf with an opportunity to display her remarkable gifts, it fails to give the 49-year-old Ms. Parker a role of comparable breadth and interest. (The Playbill cover has absolutely nothing to do with the play or her role.) As Elizabeth Gaesling, an attractive, youthful-looking mother of two diametrically opposed sons, whose husband died of a heart attack, she is not that far removed from Nancy Botwin, the attractive, youthful-looking mother of two diametrically opposed sons on her long-running TV series, “Weeds.” Of course, the circumstances and characters are completely different, but her performance and appearance do nothing to dispel Nancy’s image; Briar, my young adult granddaughter, who has watched all eight seasons of the now ended show (I watched only the first two), felt that, as performed, the characters were practically interchangeable. 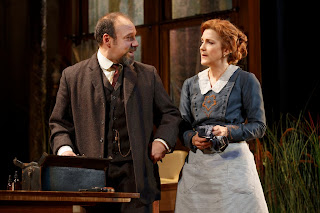 
In brief, THE SNOW GEESE, set on November 1, 1917, half a year after America entered World War I, takes place on the day the Gaesling family carries out its annual shooting party at its hunting lodge, with each type of fowl given a quota as to how many can be killed. Present are Elizabeth, the lovely but seemingly irresponsible matriarch still grieving over her husband’s death; her Exeter and Princeton-educated son, Duncan (Evan Jonigkeit), who is about to be sent off to fight in France; Arnold (Brian Cross), her 18-year-old son, deprived of Duncan’s educational privileges for reasons the play eventually discloses; Clarissa Hohmann (Victoria Clark), Elizabeth’s down-to-earth, older sister; Max Hohmann (Danny Burstein), Clarissa’s husband, a German immigrant doctor who has been subjected to anti-German xenophobia at home in Syracuse, New York; and Viktorya Grainy (Jessica Love), the once wealthy and cultured but now impoverished Ukrainian maidservant who is subject to the arrogant Duncan’s class snobbery, and is the object of Arnold’s carefully muted affections. 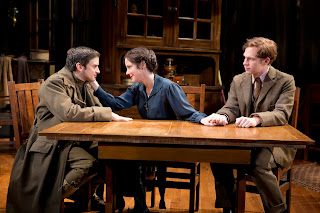 
The play takes place over the course of a single day and night, with not much happening other than the kinds of conversations and small events that serve to reveal time, place, and character. Duncan, the golden boy of Elizabeth’s affections (he is Hamlet to her Gertrude), is supposedly so charming that his personal drawbacks fade into insignificance, while Arnold, the earnest, serious-minded son, gains only his mother’s grudging approval. The sibling rivalry is the play’s strongest axle. Duncan haughtily dismisses the danger he'll be facing as a soldier when told by Max and Arnold of the slaughter going on in Europe; as a member of the silk-stocking 7th Regiment, he's so filled with a belief in American exceptionalism he can’t believe he may soon be little more than cannon fodder. As depicted in the writing and Mr. Jonigkeit’s performance, Duncan, who has been raised to marry a rich girl, has about as much appeal as Iran’s president on a charm offensive, creating an uncomfortable breach between the playwright's vision and the audience's perception.
Arnold, the practical-minded son, nearly tears his hair out trying to convince his mother and brother that the family is broke, broke, broke because of their father’s financial ineptitude and the chicanery of a trusted family employee, but they dismiss him as an alarmist, a reaction that, while possible, is simply too artificially established to ring true. When Duncan realizes that his spoiled existence may partly be responsible for the family’s situation, Mr. White’s foreshadowing with the gun is resolved, if not necessarily in true Chekhovian fashion.  Alone with his rational Aunt Clarissa, Arnold offers a convenient explanation of how the situation can be fixed, but whether his ideas will be followed is anybody’s guess. Mr. White has said he was influenced by the 1985 movie, THE SHOOTING PARTY, about the end of Britain's Gilded Age. In his play, America's Gilded Age is coming to an end, and an uncertain new age will soon begin. 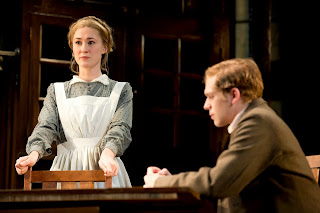 Jessica Love and Brian Cross. Photo: Joan Marcus.
Ms. Parker has a few scenes that seem designed to underscore her star presence, one being a dream fantasy that begins act two, when she is alone outside with a handsome man on a romantically starlit night; it seems a bit odd until we slowly realize he is her late husband, Theodore (Christopher Innvar). As they playfully dance and begin to make love, she removes her pretty white dress, revealing stunning period lingerie that shows off Ms. Parker’s stylishly slender figure; the man, saying he has to pee ("piss," I think he said), exits and, after enough time for him to water the forest, Elizabeth wakes up when Clarissa finds her there. The scene seems devised purely for its opportunity to show off Ms. Parker’s still radiant beauty in pre-Victoria’s Secret undies; nothing much is made of a middle-aged woman’s having been so obsessed with her erotic fantasies that she took off her clothes while lying on the ground on a November evening. (The device of having Theodore exit for a bodily function brings to mind a comment young Samuel Beckett once made to a friend: “It’s funny when you think of all the trouble that a playwright takes to get his characters off and on the stage. It’s so simple, you see: when you think this man might want to pee, you simply make him leave for that!”) 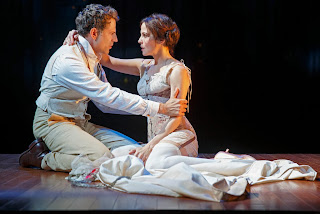 
Mr. White, in trying to snare the language and manners of well-educated people in 1917 falls into the trap of making everyone sound bookish and artificial. Elizabeth faults Arnold for not making “foible room” when criticizing others, and Arnold repeatedly calls his father “a financial maladroit.” Among the positive qualities Elizabeth lists for Arnold are his “pugilism.” The actors strive to behave naturally, but neither the occasional vulgarity (jarringly out of place in this environment), strained humor (some of it instigated by the pious Clarissa's Methodism), old-time dances choreographed by Mimi Lieber, nor Daniel Sullivan’s direction can dispel the mustiness that blankets these wax figures. While there are momentary gleams of life, mainly from Ms. Clark and Mr. Burstein, their batteries soon die out and theatrical fustian creeps in like the fog encircling the house.


Despite all those birds that seem to fly across the stage, THE SNOW GEESE has too much ballast to get off the ground.
Posted by Samuel L. Leiter at 8:35 PM