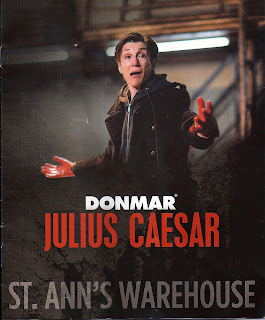 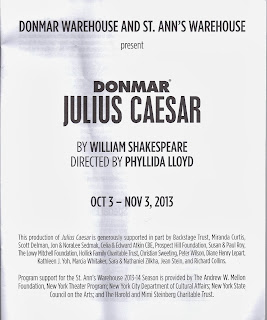 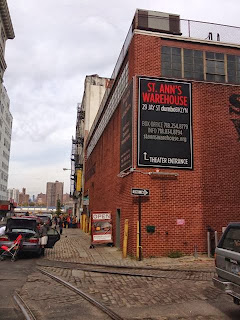 
Although Orson Welles staged a remarkable modern dress production of JULIUS CAESAR in 1937, illuminating the play by setting it in the world of 1930s European Fascism, the vast majority of later productions have kept the play in some version of ancient Rome. None of the 15 influential productions described in my 1986 book, Shakespeare around the Globe: a Guide to Notable Postwar Revivals, has an idiosyncratic background, which is not to say that other productions have not had them. Just last season, the Brooklyn Academy of Music presented the Royal Shakespeare Company’s all-black staging, set in a an unnamed African country, and employed modern dress with hints of Roman togas.


Now an even more powerful British production has hit these shores, also in Brooklyn, with the Donmar Warehouse’s version, on view at St. Ann’s Warehouse in Dumbo. This one has an entirely female cast and is conceived as a rehearsal of the play inside a women’s prison. (A similar idea, but with a male company, is behind the acclaimed 2012 Italian film, Caesar Must Die.) The racially mixed company of 14 actors, whose best-known artist is the outstanding Dame Harriet Walter, playing Brutus, thrusts every bit of human energy into its relentless performance, staged by Phyllida Lloyd, with crystal-clear diction and consistently enlightening readings that make the play sizzle with life throughout its two intermissionless hours.


St. Ann’s, with its loading docks, rolling gates, and oversized, metal double doors, is the perfect venue for creating a prison-like environment. The audience is forced to wait on line outside and is admitted to an enclosed loading dock in batches of about 50 each, where uniformed guards oversee them as one of them issues a stern warning that cell phones will be confiscated if they aren’t turned off. When you do go in you are faced by banks of seats occupied by those who entered earlier. The same loading dock later becomes an important entryway during the play. The wall into which the dock’s rolling metal gate is set is lined with a catwalk and also has a guardroom behind glass windows, where the prison officials can keep watch over the proceedings.


Designer Bunny Christie deserves high marks for her imaginative use of the space, just as does Neil Austin for his exceptional lighting, which manages to create effects that seem appropriate to the instruments potentially available in a women’s prison. Ms. Christie has dressed the inmates’ in  sweatpants and hooded sweatshirts, accented here and there by individual touches, including Caesar’s beret and Brutus' long coat, make suitable substitutes for the togas and robes that usually encase the actors of this play. The camouflage gear and ski masks worn during the battle scenes, however, are now de rigueur for modern-dress Shakespeare.


This is a rapidly paced, high-energy, textually trimmed-down production, that wrings every bit of nuance out of the power politics that inform both the play and the world of prison life, with its shifting allegiances and cliques. Rubber knives and toy pistols and rifles stand in for swords and daggers as drum beats mark the shootings that occur; prison spotlights, manipulated by guards, illuminate some of the action; Caesar’s followers wear paper masks with his face on them; heavy metal electric guitar and percussion music (by Garry Yerson), played by inmates, highlights certain moments; red rubber gloves suggest hands steeped in blood; an actor portrays a vicious dog; the petite soothsayer (Carrie Rock) rides through the play on a tricycle, wearing a tutu; and video cameras portray the way in which politics exploits the media and vice versa.  Aiding immeasurably in the assured staging is the choreographed movement created by Ann Yee.


There are many inventive theatrical touches. For example, I was seated in the second row, center, and noticed that the center seat in the first row and the one behind it, next to me, were empty, which made me wonder why they were unoccupied for a sold-out show. That question was dispelled during the murder of Caesar (Florence Barber) in the Senate, when he was forced into the first row seat by the assassins; one of them came into my row and throttled him from behind as he was forced to drink something horrible from a blue plastic bottle and then stabbed multiple times. After the trusted Brutus pierced him, Caesar, lying on the floor, burst into hysterical laughter. It was as if the irony of Brutus’ action struck a cosmic funny bone in the dying leader; only then did he say, “Et tu, Brute?”


Dame Harriet, her figure slim and boyish at 63, wears her hair mannishly short, allowing her face, with its fascinating angles, to seem more expressive than ever; for all her macho qualities when playing Brutus, her natural sensitivity consistently informs her magnetic performance. She is matched by the much younger Cush Jumbo’s Mark Antony; Antony's clever manipulation of the mob in his funeral oration is sensational; later, Antony's command over them is magnificently staged as if he were a choral conductor, using physical gestures to raise and lower their emotional temperature as musical cues accompany his movements. There is also a remarkably potent Cassius in the person of Jenny Jules, whose vocal and emotional power never flags, while Frances Barber’s brutishly sinister Caesar is equally compelling and strong, belying Ms. Barber’s porcelain features; a scene when Caesar picks on Cassius for being suspiciously “lean and hungry” turns startlingly ugly when the ruler stuffs a donut into Cassius’ mouth and then bites down on it himself in a sadistically brutal kiss. Later, in a casually silent moment, when we eventually learn who in the prison’s population has been playing Caesar, we get an interesting insight in the way JULIUS CAESAR expresses the uses and abuses of power. Even smaller roles, like Clare Dunne’s Portia, are played to perfection in this exceptional revival. (Ms. Dunne, who also plays Octavius, wears a padded belly to suggest that the prisoner is pregnant.)


Regardless of its unusual theatrical gimmickry, this production remains steadfastly faithful to the play while both deepening and subverting its traditional meanings. All-male productions of Shakespeare—which, after all is how he was originally done—are no longer unusual (two are opening soon on Broadway), but all-female revivals are. Other recent ones, of HAMLET and TITUS ANDRONICUS, have been reported; such ventures can be done as well as this JULIUS CAESAR, I look forward to even more.
Posted by Samuel L. Leiter at 9:25 AM