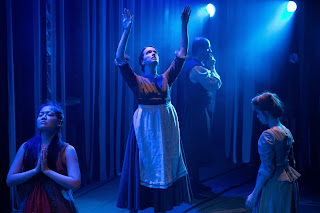 
The Bats, that feisty band of enthusiastic young thespians doing their offbeat thing, is at it again down at the Flea on White Street, with Adriano Shaplin’s SARAH FLOOD IN SALEM, MASS. This is one of those exercises where an ensemble of fledgling actors thirsting to test their mettle is thrust into a play requiring them to throw caution to the winds and put their hearts and souls into a plot and characters that may not make much sense, but, by God (or godly, as the play would have it), they’re going to give it everything they’ve got. Regardless, it doesn’t take long before you’re squirming in your seat, looking at your watch, and checking the program to see if it’s in more than one act (it’s in one intermissionless act, but you have to sit through it to find that out). And since there are 18 performers involved, all of them probably in their 20s, you begin to suspect that the occasional titters at the ploddingly unfunny lines must be coming from good friends and family members, some of the latter perhaps wondering whether--if this is what a career in theatre involves--there’s still time left to sell their kids on dental school or software design. 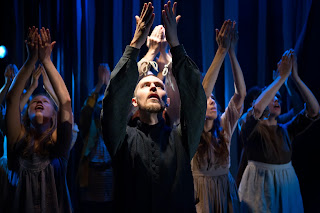 
Before the play proper begins, the actors engage in about 10 minutes of choreographic prologue, miming things like planting, chopping wood, and preparing food, on a bare, foggy stage backed by a curtain of thin cloth strips (set design by Caitlin Lainoff, lighting by Dante Olivia Smith), while also engaged in multiple other mimic and verbal activities that must make sense to the performers, if not to those watching. Most are wearing costumes (designed by Nikki Delhomme) mildly suggestive of pioneer--if not Puritan--life, but there are two young women in flesh-toned bras and skirts as well. A number of characters are speaking rapidly but it's difficult to make out what they're saying, especially with all the distracting business going on. The two women in bras often talk about chewing one piece of gum for the rest of your life (I learned only when looking at the script that this refers to the source of all nutrition in the future). Their actions are timed to a constant musical background, and grow wearisome very quickly, so you needn’t be in a hurry to take your seat. It is, of course, strongly reminiscent of the avant garde of the 1960s, but far less interesting. 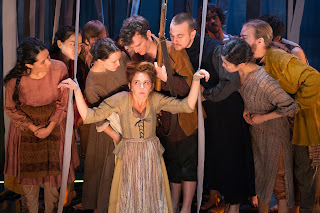 
Then the play begins. As the title indicates, it’s set in Salem, Massachusetts, known for its witchcraft history, most famously dramatized in Arthur Miller’s THE CRUCIBLE. Almost all the pseudo-poetic dialogue, written in a contemporary tone with modern slang and (mild) profanity, is delivered in full (often annoyingly full) voice directly to the audience in the Flea's compact upstairs theatre, even when characters are speaking to each other. The action is almost entirely presented in dance-like patterns (music backs most of the action), not unlike the momentary bits of terpsichorean behavior in the current revival of THE GLASS MENAGERIE. Pretension is writ large across every moment, a confusing and totally uninvolving mishmash of exaggerated plots and subplots too tiresome, vague, and poorly integrated to care about. The characters, when acted in the overstated stylization created by director Rebecca Wright, have no reality that brings you into their world. Nonrealistic theatrical style cannot be established for its own sake; it must have a grounding in human truth, but this production is so aggressively fond of the banal style it has adopted it seems to care not a whit about affecting you emotionally or clearly communicating a story. There's so much going on I won't bother trying to summarize the plot(s), if that even were possible. Suffice it to say the play touches on witchcraft, black magic, romance, power, death, war, the Devil, Indians, the Book, female agency, community, capitalism, property ownership, executions, religion, beavers, woodland rituals, and probably a half dozen other things; oh yes, there also are those two young women I mentioned before who are actually time travelers from the future who visit the townspeople of Salem, Mass. Don’t ask 'cause I won’t try to tell.


Glenna Grant, Michelle Silvani, Bradley Anderson. Photo: Hunter Canning.
The Bats should be praised for their willingness to take risks; last season they struck gold with the nuttily flamboyant RESTORATION COMEDY, but risks entail the strong possibility of failure. Nothing ventured, nothing gained. I don't believe much was gained with SARAH FLOOD IN SALEM, MASS, but am certainly looking forth to their next venture.