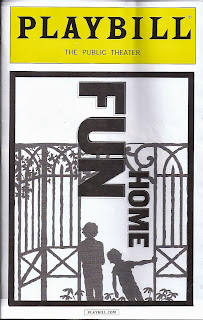 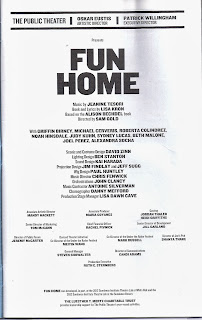 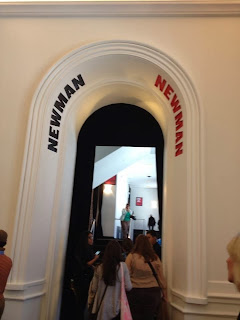 Entrance to the Newman Theatre.
As I watched FUN HOME at the Newman Theatre, within the Public Theatre complex, I could sense the emotional connection between many members of the audience and the musical on stage. My theatre companion, who has a gay daughter, nudged me at one point and told me he’d been crying almost since the show began; the gay young man on the left of me whooped and slapped his knee at every joke and dabbed his eyes at the more touching moments; and I noted a gay acquaintance brushing a tear from his cheek as he moved up the aisle at the end. The subject matter, adapted from a best-selling, award-winning, 2006 graphic novel of the same name by lesbian cartoonist Alison Bechdel, was apparently very familiar to a large number of spectators (the friend who went with me had once tried to write a play based on it), but to ignorant me it was unexplored territory. (After doing some post-show research, I learned that FUN HOME is a very controversial book and that attempts have been made to remove it from certain public libraries and college course curriculums on the grounds that it is pornographic.) 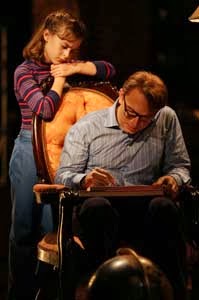 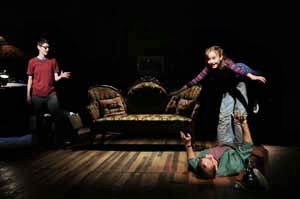 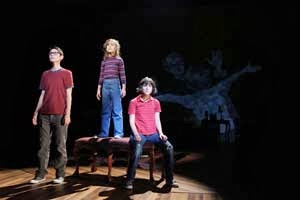 
What I saw during the show’s 100 or so intermissionless minutes was the talented young director Sam Gold’s lovely staging of a show that uses considerable charm to relate a painful story of a sweet young lesbian's sexual coming of age, from the time of her childhood in a small, rural Pennsylvania town, to her college years at Oberlin, where she comes out of the closet, to her maturity as a successful writer-artist. In the latter guise, as the mature Alison (Beth Malone), she serves as an omnipresent narrator, watching the experiences of her younger selves (played, in a stroke of conceptual creativity, by two other actresses, called Small Alison and Medium Alison). Plays and musicals with gay coming-of-age themes are far from unique, of course, but in this case Ms. Bechdel’s autobiographical tale takes on a much darker and deeper hue than usual because it involves the story of her father, Bruce (Michael Cerveris), a closeted gay mortician and high school English teacher who is more obsessed with restoring his historic Gothic Revival home than with being a father or a husband, despite outwardly seeming ideal at the latter responsibilities. Fun Home refers not to his house, but to Bruce's funeral parlor, where the three Bechdel kids, Alison, Christian (Griffin Birney), and little John (Noah Hinsdale), freely enjoy themselves, including by hiding in the caskets, which they take for granted.


Bruce's gayness is intimated fairly early by his flirtatious behavior with a nice-looking student named Roy (Joel Perez, who plays all of Bruce's liaisons) during Small Alison’s childhood (the adorable Sydney Lucas). His struggles with his sexual passions lead this tortured soul to express his self-loathing by sometimes behaving nastily to his long-suffering wife, Helen (Judy Kuhn), or by occasionally tyrannizing his children, but never to the point where we forget his love for them. In college, Medium Alison (Alexandra Socha), who has only recently accepted her own gayness and begun a relationship with a college friend, Joan (Roberta Colindrez), learns of her father’s sexual interests from her fed-up mother, and it is only a short time afterward that Bruce—who, unlike his daughter, remains reluctant to accept his sexual orientation—steps in front of a truck and is killed in what Alison is certain was a suicide. She had never been able to break through Bruce’s reserve about his sexuality; when he gives her a book about Colette, the lesbian writer, and she wonders if it means he is somehow trying to reach out to her, he remains noncommittal. Through her illustrated memoir, Alison seeks to come to terms with his death and their complex relationship, partly indicated by small things like Bruce’s constant attempts to feminize Small Alison by demanding that she wear a barrette.
From left: Joel Perez, Michael Cerveris, Beth Malone. Photo: Public Theatre.


The libretto, which begins during Alison's childhood, moves around freely in time and space, exploring its issues in the form of anecdotal memories and feelings; since important information is telegraphed early on, there is no strong dramatic arc or suspense, but book and lyric writer Lisa Kron has managed to craft a continually engrossing narrative that expertly mingles comedy and drama. Although Jeanine Tesori has contributed many quality songs (not, unfortunately, listed in the program), this is not a sung-through musical; the dialogue sequences, however, are accompanied by a constant musical background that provides a rhythmic and melodic propulsion to the performance. Much of Ms. Tesori's score, like so many nowadays, has that Sondheimesque quality of emphasizing narrative progression, so that the music serves to advance the story rather than being something to be enjoyed on its own. She nonetheless is gifted enough to allow some numbers to stand out for both their narrative and musical artistry. One of these concerns Alison's being turned on by the sight of a butch lesbian delivery woman and her heavy set of keys. Another is a parody TV commercial for the family funeral home. And Ms. Kuhn sings a wonderful song to Medium Alison about living one's life for happiness.


David Zinn’s set is an open environment showing the brick rear wall of the stage (or a simulacrum of it) with furnishings spread out across the expansive, polished wood floor, to be brought into focus as necessary by the use of a turntable built into the deck. Later in the show, the entire rear wall is covered with wallpaper and wainscoting, an allusion to Bruce’s home restoration project. Mr. Zinn’s costumes vary appropriately with the periods presented, and Ben Stanton’s lighting does a superb job of capturing mood and atmosphere in the way it highlights various areas of the stage. There are a number of projections, designed by Jim Findlay and Jeff Sugg, but for some reason, the designers and director chose not to use images from Ms. Bechdel's book, except for one shown toward the end. Since the show alludes to her cartoons, and she always carries a drawing pad, a few more would have been welcome, such as the one in the book where Bruce supports Small Alison on his feet as she poses with arms spread like an airplane, a moment memorably recaptured in the play.
The three children who play the young Bechdels are all terrific, with special kudos earned by little Sydney Lucas in a demanding role that calls on her singing, dancing, and acting skills. Alexandra Socha’s Medium Alison is always honest and grounded, as is Beth Malone as the brooding, observant mature Alison, a slim, bespectacled, wraith-like figure with short-cropped hair, standing in the shadows dressed in jeans and maroon polo shirt, holding her large drawing pad, and choosing how to caption the moment she is remembering; judging by online photos, she presents a rather good likeness of Ms. Bechdel. Michael Cerveris, wearing a red wig, is an ideal embodiment of Bruce, singing beautifully and acting truthfully. Judy Kuhn, as Helen, is in excellent voice, while Roberta Colindrez is perfectly believable as Joan.


Despite the considerable talents of all concerned, and the meaningfulness of the material, with its sensitive handling of a subject rare in musical theatre, something about the show kept me from becoming as emotionally invested in it as so many others. Except perhaps, for the big, powerful number sung by Bruce (in a marvelous moment for Mr. Cerveris) toward the end before he steps in front of that truck, I struggled to go beyond objective appreciation into subjective involvement. This is surely my own limitation (an unconscious hetero bias, perhaps?), and not the show's, and I'm sure the reviews will all note how moved the critics were; I really wish, though, that I too were dabbing my tears when FUN HOME ended.
Posted by Samuel L. Leiter at 8:46 PM