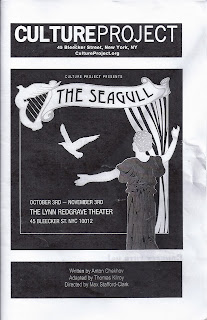 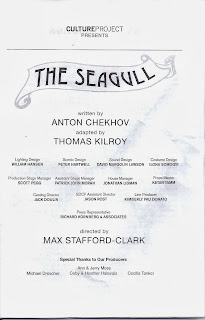 In 1981 Max Stafford-Clark, then artistic director of London’s prestigious Royal Court Theatre, commissioned Irish playwright Thomas Kilroy to adapt Chekhov’s THE SEAGULL, written in 1895 and produced a year later, by shifting its native Russian setting to West Ireland in the 1880s. The production proved a success and now, 32 years later, Mr. Stafford-Clark has returned to the play, staging it with a mixed British, Irish, and American cast at the Culture Project’s Lynn Redgrave Theatre on Bleecker Street.  Mr. Kilroy found many social and political parallels that justified the geographic transformation from a Slavic to an Anglo-Irish provincial environment, and also took into account the particular accents the new version would employ to suggest the class and educational differences among the characters. The attitudes of the provincial Irish toward England and the opposite also had parallels between provincial Russians and Moscow. This can be seen, for example, in the relationship between Constantine (Slate Holmgren), the aspiring Irish playwright, and his mother, Isobel Desmond (Trudie Styler)—Chekhov’s Mme. Irina Nicolayevna Arkadina—the sophisticated London theatre star who condescends to visit her aging, ailing brother Peter’s estate and engages in a volatile love-hate relationship with her son. 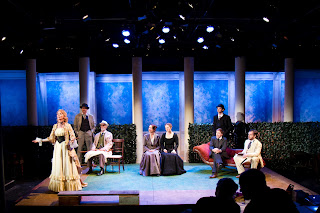 Only the names Constantine [Gavrilovich Trepleff], Peter [Nicolayevitch Sorin] (Kenneth Ryan), and Pauline [Andreyevna] (Stella Feehily), by the way, remain from Chekhov, although without the additional names shown here in brackets; Mr. Stafford-Clark, whom I met at the theatre, said this is because they are the only ones common in both Russia and Ireland. Thus we have Lily (Rachel Spencer Hewitt) for Nina Mikhailovna Zaryetchny, Cousin Gregory (Tim Ruddy) for Ilya Afanasyevitch Shamreyeff, Mary (Amanda Quaid) for Masha Marya Ilyinishna, Mr. Aston (Alan Cox) for Boris Alexeyevitch Trigorin, Dr. Hickey (Rufus Collins) for Dr. Eugene Sergeyetich Dorn, and James (Ryan David O’Byrne) for Semyon Semyonovitch Medvedenko.


Mr. Kilroy, as has become common in such adaptations, didn’t translate the play himself but worked from a literal version that he skillfully transposed into a believable variety of Anglo-British verbal patterns that, I assume, are much easier for English-speaking actors to feel comfortable with than the sometimes stiff-sounding translations that attempt to capture the essence of Russian-speaking characters. Everything sounded quite natural, and—despite the playwright’s lengthy program note rationale—I appreciated the territorial shift more because of this linguistic transposition than for any of the presumed new insights afforded into late 19th-century social and political issues, such as the deleterious effect the Land Acts are having on the landed gentry. The name Parnell flies by, but I doubt many Americans will pick up on it, or even on the references to Isobel’s great West End rivals, Madge Kennedy and Ellen Terry. Then again, those familiar with translations of the play may be disturbed by alterations such as that given the play’s opening lines. In Stark Young’s version, they go: “Medvedenko (Semyon): Why do you always wear black?” Masha: I am in mourning for my life. I’m unhappy.” Kilroy changes this to: “James: And why is it you're always wearing black?” Mary: “It's because I'm so sad. Black is for sadness.”


The Irish atmosphere offers the opportunity for Constantine’s pretentiously symbolist play to be inspired by Celtic myth in what is clearly a reference to the poetic plays of Yeats. It's staged in an aisle, forcing some audience members, including me, to crane their necks to see it. Lily appears there resembling a pre-Raphaelite Ellen Terry in Sargent’s painting of her as Lady Macbeth. Irish songs, beautifully sung acapella by Stella Feehily, cover the scene changes. Jocular Irish humor bubbles up throughout to maintain the proper spirit.


This is a low-budget production, so Peter Hartwell’s design uses a single set of blue walls and white pillars for each scene, with the furniture rearranged to suit the dramatic needs. For the opening scene, a green hedge tells us that we are outdoors. It is not the most appealing way to produce THE SEAGULL, but it is efficient enough to establish a basic environment that allows us to concentrate on the play and its performance. Ilona Somogyi’s costumes nicely convey the period and style.


For me, the foremost performance is that of British actor Alan Cox, so brilliant earlier in the season in the title role of Priestley’s CORNELIUS, and here a surprisingly amusing and likably charming Trigorin (whoops, Aston). He brings out all the self-deprecating insecurities of this outwardly successful English middlebrow writer, the way he constantly belittles and questions his own fame, when faced by the awestruck idealization he elicits from the innocent young Lily/Nina of Rachel Spencer Hewitt. When we realize later his eventual cruelty toward Nina, the seagull he destroys, his apparent niceness takes on a hue of unexpected evil. Ms. Hewitt, an American actress with a warm, radiant beauty, brings a rich voice and deep intelligence to the role, but she seems too sophisticated in her early scenes to be so easy a victim of Aston’s charms; her later scenes, after she’s suffered rejection as an actress and the loss of a child, are better but still not thoroughly convincing. Mr. Holmgren’s Constantine is far too overwrought and unpleasant. Bald and bearded, he’s not your conventional Constantine, and with his constant whining and temper tantrums, fails to evoke much sympathy. Mr. Stafford-Clark stresses Constantine’s Oedipal relationship to Isobel, including a scene when he vainly attempts to kiss her on the lips. (Their bond closely approximates that of Hamlet and Gertrude.) British veteran Trudie Styler (best known, perhaps, as the wife of Sting) gives the diva Isobel/Arkadina a satisfying aura of self-involvement and theatrical grand manners, but has difficulty engaging with her subtextual vulnerability. The other company members are mostly vibrant and colorful (especially Tim Ruddy as Cousin Gregory, with his boorish stories of famous actors he’s seen), and offer helpful support.


This SEAGULL avoids the gloominess often associated with Chekhov and seeks to hit the play’s comic buttons (Chekhov insisted that the play was a comedy), but this sometimes leads to excessive shouting among a group of temperamental hotheads, especially in the early scenes. There are a number of choices that seem odd, including having the dead seagull shot by Constantine hidden in a burlap bag. But, imperfect as it is, I found the production more spirited and enjoyable than the star-powered Broadway revival of 2008 starring Kristin Scott Thomas as Arkadina, Carey Mulligan as Nina, and Peter Sarsgaard as Constantine. Chekhov in Ireland may seem odd, but the fellow turns out have been a broth of a boy.