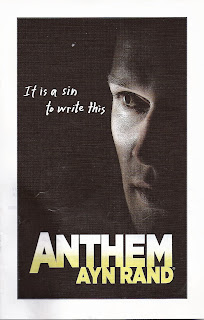 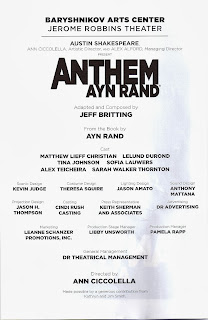 Ayn Rand has been much in the news of late, as witness those Tea Party enthusiasts and conservative Republicans who are considered fans of her, like Rep. Paul Ryan. It comes as no surprise, then, that Jeff Britting, the curator of the Ayn Rand Archives at the Ayn Rand Institute, has taken one of her novels, the dystopian ANTHEM (1938), and made a play out of it. Not a good play, but a play nonetheless.


As directed by Ann Ciccolela for Austin Shakespeare, “the only professional classical theater company in Central Texas,” and now brought to New York at the Baryshnikov Arts Center, ANTHEM comes across as a simplistic work about the dangers of collectivism and its fears of any sort of individualism, even if it means living in a darkness lit only by candles should some freethinking person invent something as practical as electricity. In this futuristic, post-electric world (which brings to mind that envisioned in the currently running, MR. BURNS, A POST-ELECTRIC PLAY), everyone is assigned a number for a name, the hero being called Equality 7-2621 (Matthew Lieff Christian) and the girl he falls in love with (God—who doesn’t exist here—forbid), Liberty 5-3000 (Sofia Lauwers); everyone wears their number/name on a bracelet. I guess I’d be Dickens 5-7491, which was my home phone number when I grew up. (Just don’t call me Dick.) 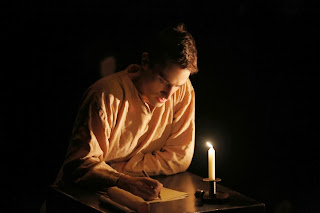 Love is forbidden, free thought is a no-no, the word “I” is banned in favor of “we” and “us” (you are subject to burning at the stake for speaking otherwise), everyone is assigned to a career regardless of ability. Equality 7-2621, a  21-year-old genius who--like a modern Prometheus--reinvents electricity--is assigned to be a street sweeper. The World Council, dressed in hooded robes like medieval monks (costumes are by Theresa Squire), rules, and, when Equality 7-2671, who is cursed by the need to think, shows his new invention--created in an ancient subway tunnel--to the Council of Scholars and explains its potential for relieving man from unnecessary toil, he is excoriated and told not only that it is man’s nature to toil and that his creation will be too serious a blow to the Department of Candles, but that candles took 50 years to develop, so new ideas are not wanted. Not even North Korea, probably the closest thing to the world Rand envisages, would be so stupid. 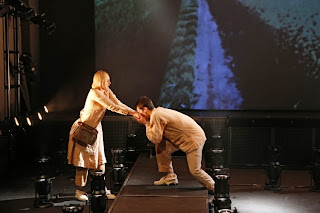 Of course, humans being humans, someone is bound to rebel in such a world, which is Equality 7-2671’s role. He even falls in love with the pretty blonde Liberty 5-3000 (whose perfectly cut hair and use of makeup belie her society’s emphasis on denying all individuality), whom he calls "the Golden One." Imprisoned in the Palace of Corrective Detention, he escapes into the Uncharted Forest, where Liberty 5-3000 joins him. Enjoying the rapture of freedom, they live easily off the land and even find a beautiful, well-preserved, castle-like home. Soon other likeminded people join them and the future of individualism looks bright, especially when Equality 7-2671 discovers through his reading the one true god—I (as in the first person). 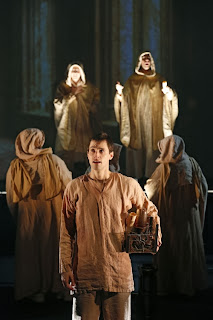 
It's easy to understand how Rand, born in Russia and forced to endure a totalitarian government that took her family's business away, could arrive at such a vision of the dangers of collectivism and write a book that, as the The Jewish Week describes it, "glorifies individualism and capitalism over governmental power and collective responsibility." But, as dramatized, nothing rings true, neither the text nor the acting. The script includes many monologue-like passages I’m told are taken directly from the original novel, and these are mostly delivered straight to the audience at full volume; the robotic actors don’t so much speak as speechify, even to one another. It’s not that the five-member cast is untalented that makes sitting through this bleak and monotonous work unbearable, it’s that they’ve been directed to behave in such a dehumanized way that listening to them begins to make North Korea seem inviting. The matinee I attended began at 2:10 and ended at around 4:40. The program says the show runs 75 minutes without an intermission. If only.


All this is played on an open stage that designer Kevin Judge has equipped with a raised platform running across the upstage area; a large projection screen is set against the rear wall. Projections, both still and video, of disasters, conflagrations, and interior and exterior locales, are constantly used, and there is an extensive sound score by Anthony Mattana to highlight the feeling of doom and gloom. The stage floor proper is a minefield of lighting instruments pointing upwards (lots of ghostly effects when actors stand over them), and the side walls are exposed so even more lighting instruments can be employed. For a play about a world in which only candlelight is available, lighting designer Jason Amato makes a hell of a lot of use of precisely what is verboten in Ayn Rand’s dystopia.


ANTHEM, inspired by Rand's support of the philosophy of Objectivism, surely addresses crucial issues, but it does so in such absolute terms that nuance has no place. In essence, it suggests that you're either a collectivist or an individualist. If you're the former you act only if it benefits the collective, if you're the latter self-interest trumps all other concerns. Many on the political right believe anything that requires people to act for the good of society as a whole is bad, like Obamacare. Playwright Britting has said because we are being forced to sacrifice our individualism for the collective good, we are heading for a world that will be very much like that in ANTHEM.

A different adaptation of ANTHEM, by Jennifer Sandella, who also directed, ran at the Dorothy Streisin Theatre in February of this year in a production given by the Random Access Theatre. I found a very positive review of it online, and, not realizing right away that it wasn't about the current production, wondered how the reviewer's perceptions and mine could be at such opposite poles. Perhaps the material might not have proved so questionable in a more trustworthy production. Its politics aside, whatever dramatic values this material may have are not being worthily served in this production. And I'm delighted to have the freedom to say that in the interests of the common good.