113. A NIGHT WITH JANIS JOPLIN 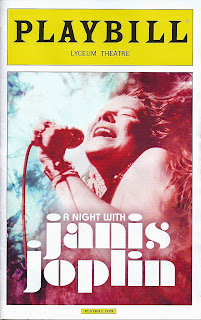 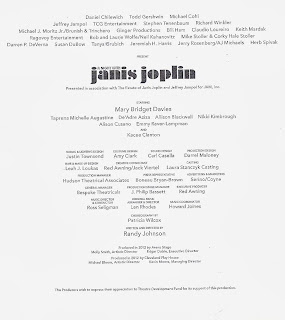 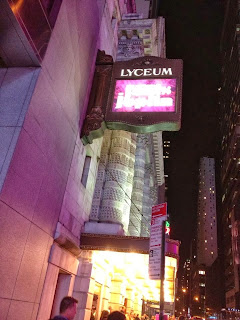 Outside the Lyceum Theatre.
To get to the Lyceum Theatre on Tuesday night one had to navigate through a crowd of young people waiting with bated breath for the pop idol du jour, Myley Cyrus, who was scheduled to appear at Planet Hollywood for a record signing for her new album. A huge electronic sign on W. 45th Street near Broadway announced the event, while right next door, at the Lyceum, a much more demure sign signaled the presence of A NIGHT WITH JANIS JOPLIN, the new Broadway concert musical cum revue about the iconic, white blues singer of the 1960s. Inside the theatre there was nothing demure about the electric energy generated by the remarkable Mary Bridget Davies, who incarnates Janis Joplin with an ear-blasting force and deeply felt intensity of which the original would have been proud. A star is born. 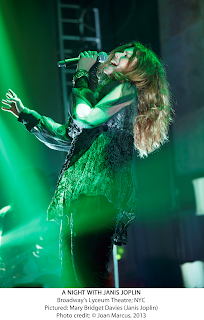 This aggressively upbeat tribute show imagines that we are at a road show Joplin concert, but in no specific time or place. Designer Justin Townsend, responsible for both the set and lights, has surrounded the proscenium with thin slivers of light that burst outwards with excitement, while every conceivable, computer-operated, rock concert lighting instrument is brought into play to  turn the sedate old Lyceum, Broadway’s oldest playhouse, into a pulsating arena of flashing and rotating spots, wall-to-wall sound, and seat-shaking rhythm. The stage itself is a simple concert platform, with an orchestra of rock musicians upstage, including bass, keyboard, drums, sax, trumpet, trombone, and two guitars; they form a sensational musical ensemble that rocks the rafters on every number. There’s a spiral staircase upstage right leading to a catwalk overhead, and a large multi-paneled projection screen at the rear. 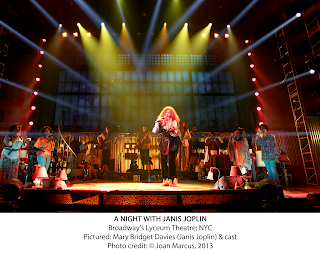 Unlike another current tribute show to a vanished pop legend, LADY DAY (reviewed here recently), A NIGHT WITH JANIS JOPLIN makes no attempt to rehash the star’s biography. Janis and Billie Holiday both died tragically young from similar causes (Janis of a heroin overdose in 1969 when she was only 27), but, in keeping with the show’s good-times spirit—meant to celebrate, not mourn—no mention is made of her problems with forbidden substances. An article on the show in the Playbill declares that the show deliberately doesn’t “exploit the more lurid aspects of” Janis’s life, presumably in keeping with the wishes of her sister and brother, who oversee her legacy.


Janis, who hosts the evening with down-home appeal (and occasional profanity), and has the only speaking part, chats affectionately with the audience between songs about her early life as a middle-class girl in Port Arthur, Texas, of the influences (blues, rock, soul, and Broadway) that shaped her musical style, and offers warm generalities about the meaning of the blues and her love of performing. She talks about the importance of agency in a woman’s life, and there are hints of her unhappiness in love (she prefers her audiences to any man), but the only suggestion of substance abuse is her occasionally taking a slug from a bottle of Southern Comfort. My ears caught little about the milestones in her career—like Monterey and Woodstock; aside from a few major rock groups, the people she references are mainly from her family; it was interesting to know that her mother was a singer who loved Broadway musicals, and Janis grew up listening to the cast recordings. And, even though Janis’s brief career was smack dab in the 60s, and she first rocketed to fame with the psychedelic acid-rock band, Big Brother and the Holding Company, the extensive visuals—most notably in Darrel Maloney’s projections—barely reflect the period’s hallucinogenic imagery, although Amy Clark's costumes reference the period pretty well.


Janis’s singing was famous for TNT-detonations of sound that came at you in astonishing, raspy shouts of emotional power. Mary Bridget Davies is as close to the real thing as you could want. She even resembles Janis Joplin, although a slightly chubbier version. The Janis she presents in her speaking scenes is someone you feel comfortable with because of her surprisingly sweet and direct personality. When singing, her vocal cords explode in 20 numbers, some of them shared with other artists. My sole cavil, and it would apply to Janis herself, is that her soul-style singing often obliterates the lyrics, even with the volume going through the roof. If you don't know the words, you may find yourself appreciating the singer's vocal instrument and emotional force, but it does weaken the experience. During intermission, a friend seated in the third row shared her similar experience of this, so at least I know I'm not alone.


Randy Johnson, who wrote and staged the show, made a classy decision in allowing these singers to share some of the stage time with Janis, both because Ms. Davies (who is replaced by Kacee Clanton at certain performances) deserves a rest now and then, and because Janis’s power belting can become too much of a good thing. When the others sing, even when they belt, the show gets essential infusions of variety. Making things even better is that each of the other singers, all of them African-American women, is incredibly gifted, whether performing as part of Janis’s backup group, the Joplinaires, or as the singers whose talents influenced the budding young star. This allows us to hear the Chantels singing “Maybe,” Odetta (De’Adre Aziza) offering “Down on Me,” and Bessie Smith (Taprena Michelle Augustine) knocking out “Nobody Knows You When You’re Down and Out.” There’s a foot-stomping, show-stopping “Spirit in the Dark,” rocked by Aretha Franklin (Allison Blackwell), Janis, and the Joplinaires. There are also songs by Nina Simone (De’Adre Aziza), who shares “Little Girl Blue” with Janis, and Etta James (Nikki Kimbrough). One interesting number is the Gershwin’s  “Summertime,” first performed in classic style on the catwalk by an anonymous Blues Singer (Taprena Michelle Augustine) with startling beauty and authority, and then by Janis in her growly roar that digs deep down into the song's bluesy heart.


When Janis sings her anthems, the mostly middle-aged (and older) audience jumps out of their seats, clapping. and waving their hands to such Janis classics as “Piece of My Heart,” “Try (Just a Little Bit Harder,” “Cry Baby,” “Me and Bobby McGee,” “I’m Gonna Rock My Way to Heaven,” and “Mercedes Benz.” The last, by the way, is done during the curtain calls, so don’t leave too early. It’s also the first time we see Janis in her famous hippie gear of purple feather boa in her hair and big, round, blue sunglasses.


Afterward, as we passed the now quiet Planet Hollywood, my wife, who is very skeptical about most shows she sees, took me by surprise when she said, “This is going to be a hit.” I had been doubtful, I admit. I wondered if a show about a singer who died nearly half a century ago, and of whom most of those people waiting to see Miley Cyrus probably never heard, could possibly succeed in today’s Broadway atmosphere. But if my wife, who never was a particular fan of Janis Joplin’s, was entertained enough to predict success, there just may be enough of us geezers and near-geezers out there willing to spend AN EVENING WITH JANIS JOPLIN.
Posted by Samuel L. Leiter at 9:19 PM