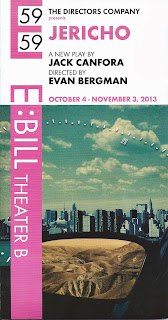 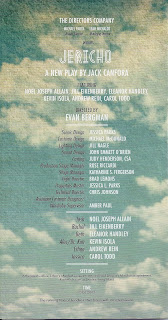 Jack Canfora’s JERICHO joins a small handful of 9/11 plays, among them Sam Shepard’s THE GOD OF HELL (2004), Anne Nelson’s THE GUYS (2001), and Neil LaBute’s THE MERCY SEAT (2005).  Like most other plays in the genre, it doesn’t actually explore the event itself but uses that horrific day as a springboard to study its effect on people who survived it. This two-act, two-hour play, which takes place in 2005, four years after the tragedy, blends romantic love, family angst, marital collapse, Jewish identity, and ethnic distrust in a dramatic structure that has some promising elements but whose walls have a few too many cracks in them.


Despite this being a relatively straightforward domestic dramedy (albeit with a character seen only in someone’s imagination), Jessica Parks’s smartly designed set avoids the typical physical elements of the office, two Manhattan apartments, bar, and suburban house in which the action transpires; instead, she creates a metaphorical background composed of household detritus, as if the living spaces of the characters had been demolished and all their furniture and appliances shoveled into two large heaps. (According to online photographs, at least one earlier production opted for familiar walls and windows.) When the minimal furniture to set a scene is required, the actors--moving to mostly folksy music selected by sound designer John Emmett O'Brien--carefully remove the necessary pieces from the piles, and return them when the scene is over. Since much of the play revolves around a 9/11 survivor named Josh (Noel Joseph Allain), and a good portion of the action is set in the middle-class Jewish home in which Josh grew up in Jericho, Long Island, it seems that the vista before us conflates the idea of the literal destruction of the Twin Towers with the tumbling walls among Josh’s loved ones.


Since 9/11, Josh, who seems to be in his late 30s, has responded to the tragedy with survivor’s guilt. He has become bitterly dissatisfied with life in this country, and his secular Judaism has turned Orthodox (he wears a yarmulke), leading him to insist on moving to Israel, where he believes he will experience the sense of a community he is unable to find in America. Josh, despite being highly articulate, as is everyone else on stage, never satisfactorily explains his malaise, which seems too vague to drive him to leave his wife and family. He seems unhappy that Americans simply moved on with their lives with what he distastefully calls "American optimism," instead of continuing to wallow in the tragedy, as the Israelis do with theirs. His deeply disillusioned wife, Jessica (Carol Todd), is totally opposed to these developments (she says she's more scared of the Jews in Israel than of the Arabs and that Josh has made her wish she weren't Jewish), and the marriage heads swiftly for the rocks. In addition to Josh and Jessica, four other people are involved. Rachel (Jill Eikenberry) is Josh’s clichéd suburban Jewish mother, who plans to move to Florida and--before she learns about their discord--wants to sell her home to Manhattanites Josh and Jessica. Josh’s bachelor brother, Ethan (Andrew Rein), who also has no truck with Josh’s beliefs, is in a relationship with Beth (Eleanor Handley), the pretty daughter of an Irish mother and a Palestinian-born father who came to America as a baby. Because her husband, Alec, died on 9/11, the day after she told him she was leaving him, her guilt prevents her from having intercourse with Ethan. (Like the central figure in BIKE AMERICA, she's fond of calling herself a "fuck-up.") This brings her to Dr. Kim (Kevin Isola), Beth’s shrink, a 47-year-old Korean-American woman played by a young, white, male actor. The reason for this odd casting is that she sees in Dr. Kim a resemblance to Alec, a reaction attributed to the phenomenon of transference. Moreover, because Beth has not been taking her meds, she engages in hallucinatory conversations with Alec (Kevin Isola, again).

Regardless of its motivation, the trope of a leading character having an imaginary confidant as a way of exploring what can't be expressed to others or as a way of thinking out one's problems is becoming as worn-out a conventional device as the aside and soliloquy (still with us, of course, including in this play). Mr. Canfora does ameliorate the convention to a degree by contrasting Beth's being haunted by someone only she can see with Jessica's concern about grieving for by the pre-9/11 Josh, which she calls the opposite of being haunted: "Everyone can see you, but I'm the only one who knows you're not there," and "you might as well be dead."


The central themes converge at a Thanksgiving dinner (when else?) when all the characters (apart from Dr. Kim) are present, and Beth, annoyed at what she later calls Josh's bullying, drops the P bomb on him about her father's heritage, even though Beth has practically no interest in or connection to her roots (apart from her taste for hummus: cue the laugh). Josh and Beth, however, begin to find some common humanity after he makes his big reveal to her about how his behavior on 9/11 established the reason for his own guilt. There follows a sort of epilogue scene when the lonely Josh calls Beth from Israel and the rapprochement continues. (We never do learn just what Josh does for a living that enables him to simply leave the USA behind and move to Israel, where he seems to be having no financial problems.)


The play’s dark subject matter is leavened throughout with humor, some of it expressed in the sex talk between the frustrated Ethan and the unwillingly resistant Beth; in the repartee between Beth and her late spouse, who spoofs his own nonexistence; and in the wisecracks at the expense of Rachel’s Jewish motherhood, such as her laying guilt trips on her children and leaving phone messages that go on forever ("She filibusters into the machine," complains Jessica). All the characters are expert at firing sarcastic zingers, which come fast and furious, but only occasionally strike the "laughter" bull's-eye. There are, as well, several sharply angry scenes, such as when Jessica and Josh go at each other over his recent religiosity and desire to move to the Promised Land.


The most touching moments arrive toward the end when Beth and Josh, communicating over the phone when he calls from Israel, talk about the multiple meanings of the Hebrew word “shalom.” As on many other occasions in the play, Beth soliloquizes to the audience, and the effect of her words comes not from their organic relation to the give and take of dialogue, but from the narrative expression of ideas. The words may be moving but they’re related to what has been happening only in the abstract; they tell us, in essence, how to feel, when the best drama should show, not tell.


JERICHO, which premiered at the New Jersey Repertory Company, and has had other showings elsewhere, has a good cast that does its best with the sometimes compelling, sometimes self-conscious writing. Ms. Eikenberry, the best-known player, is warm and attractive but doesn’t do anything especially novel with the stereotypical Rachel; it is a bit of a stretch, though, to buy her as a Jewish mother (ironically, Ms. Eikenberry's husband, actor Michael Tucker, stems from an Orthodox background). Making a more vivid impression are the younger women. Ms. Handley, with her good looks, excellent voice, and sharp intelligence, holds the stage when she's on but seems much too well put together to be the "fuck-up" she calls herself. Ms. Todd's Jessica, who has some of the most biting lines, brings the right touch of drunken rancor to her spousal unhappiness. Mr. Alain’s Josh sometimes seems stumped by the lack of things given him to say in scenes where his beliefs are challenged; the character needs to be more fully fleshed out. Mr. Rein, who in no way appears to be Mr. Allain's brother, has a lightly comic manner that works well for Ethan's moderate temperament. The notion of having Mr. Isola play both a Korean-American woman and Beth’s late husband does not come off as cleverly as the playwright may have imagined; both characters behave in much the same way and nothing is done to physically differentiate them, so it takes a bit of time before the idea of who is whom sinks in.


While I did not feel as negative about JERICHO as the friend who accompanied me, neither did I think it of more than passing interest. The subject matter is of great interest but the play seems a tad too formulaic to ring true. Whether 9/11 will ever inspire a truly memorable play is unknown. I do know that JERICHO shows how hard it is to write one. The walls of JERICHO don't quite tumble but there's often a sense that, with a little push, they just might.