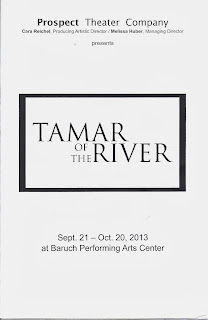 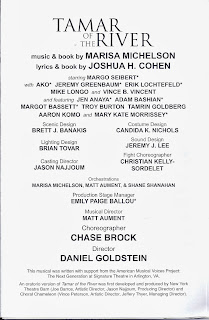 War and peace. Those two cornerstones of man’s existence that have been examined in countless dramas since the Greeks are now the theme of TAMAR OF THE RIVER, a new musical offered at the Baruch Performing Arts Center by the adventurous Prospect Theatre Company. Abundant theatrical riches are offered for your eyes and ears, and for many that will be sufficient; Joshua H. Cohen’s slim “book,” if one can call it that, seems merely a dramaturgic hook onto which the show can hang its musical and production values. 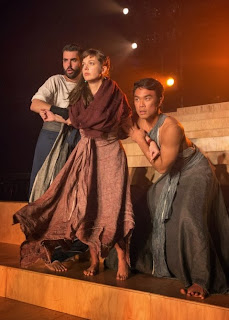 
Taking its cue from the Biblical story of Judah and Tamar in Genesis 38, but using only a few of its details, TAMAR OF THE RIVER imagines that the East and the West have been at war for ages and that the beautiful Eastern girl Tamar (Margo Siebert) hears the river dividing the people tell her (through the River Angel [Margot Bassett]) to seek peace among the Westerners. She says farewell to her Mama (Ako), and makes her way on the river to the West, where, deemed a prophet, she meets the king, Judah (Eric Lochtefeld), and his sons, Onan (Mike Longo) and Er (Vince B. Vincent), with each of whom she has relations; ironically, both die violently during her quest for peace. She has relations with the king, but that doesn’t work out too well either, although he lives. A third son, Shelah (Jeremy Greenbaum), is introduced, but nothing happens between him and Tamar, since Judah won’t allow it. Each encounter furthers or hinders Tamar’s search for peace. Finally, the river, with which she’d lost her prophesying connection, offers a promise of peace again, if not right now.


The Bible story does not talk of war and peace, or of a river, and, in fact, might best be recalled because it introduces the story of Onan, who, after Er’s death, is ordered to sleep with his brother’s wife, Tamar, so that she can have children and Onan can do his duty by raising them on behalf of Er. But Onan, not wishing to have children that he cannot truly call his own (the story is tricky here about the parentage issue), spills his seed on the ground instead, which of course gives us our first masturbator and the word onanism to describe such acts. None of this is in the show. 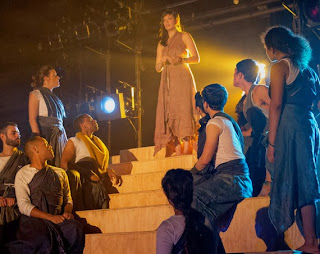 
Regardless of the liberties the show takes with its source, its essential problem is that its story is an abstraction, as are its characters. Everything is seen in absolutes, the characters exist only to establish a premise, and the issue of war and peace is reduced to a black and white essentialism without context.


Nevertheless, TAMAR AND THE RIVER is written and produced in a manner that exploits its reductionist script in favor of fascinating musical and theatrical values. Set designer Brett J. Banakis has  radically reconfigured the space so that the audience sits four rows deep on either side of a raised hanamichi-like runway about 12 feet wide running straight through the auditorium. It serves both as the river and terra firma, and leads at one end, where the audience is usually seated, to an ascending row of risers where much of the action occurs, and at the other, where the stage would normally be, to an array of lighting instruments aimed at the acting space. (Brian Tovar’s lighting adds greatly to the production’s moody atmospherics.)


Of the 13 cast members, only Tamar is not listed in the program as “River,” since the ensemble, including those who play the few speaking (as opposed to singing only) parts, enacts the watery body that speaks to Tamar. Aside from the actors of Judah and Mama, who seem to be in early middle age, everyone else is youthful and attractive. While there are few opportunities for conventional acting, each performer sings exceptionally well, most notably, the lovely Ms. Siebert (soon to be Adrian in the Broadway musical ROCKY) in her extremely demanding leading role; this is a star quality performer. They wear outstandingly imaginative costumes, designed by Candida K. Nichols, that allow the actors to wrap swathes of thin cotton cloth over simple undergarments to create robes, tunics, and togas, which lend impressive images of mass and form to their choreographed movements.


Director Daniel Goldstein and choreographer Chase Brock have molded this uniformly talented band of singer-actor-dancers into a remarkably cohesive band of voices and bodies, making brilliant use of long poles, like those used in stick fighting, to embody multiple images of fluidly dynamic bodies in motion, some of it in perfectly synchronized lock-step formations. There's a pretty moment when the actors manipulate long ribbons of paper, and another when the ribbons are of cloth and wound around Tamar, in her undergarments, to form a dress. Much of the movement, especially when the bodies are mingled in close proximity, brings to mind the work of the Open Theatre, especially THE SERPENT, back in the 1960s, something my theatre guest and I recalled independently of one another. The company makes full use of the space, appearing on either side of the runway, inches away from the feet of first row spectators, on the risers, on the ramp itself, and on overhead catwalks at either side of the auditorium. A memorable image is of tiny, paper pyramids placed by the actors on the risers, lit from beneath, to suggest the buildings Tamar persuades Judah to construct as a peace village. (This effect is reminiscent ot the effect created by Lear DeBessonet’s use of risers with tiny houses in her production of THE GOOD PERSON OF SZECHUAN).


TAMAR AND THE RIVER is not completely sung through, but despite occasional snatches of straight dialogue (barely any of it humorous), the music, composed by Marisa Michelson, practically never stops. It has truly haunting melodies and original harmonies, and quite a lot is sung acapella; it is not, however, anything like traditional theatre music. Much of it is practically operatic, and, while I know very little about music, it did remind me of Benjamin Britten’s chamber operas. My guest thought the score reflected Stephen Sondheim’s influence, but, then again, what contemporary musical theatre doesn’t? The fascinating music alone is reason to visit TAMAR AND THE RIVER; the excellence of its performance by the cast and the gifted musicians, under the musical direction of Matt Aument, make it even more compelling.


This type of experimental theatre can easily tip over into preciousness and pretentiousness, and, perhaps, that does happen here now and then, but the integrity of the choices and their execution always win out. Also, the intermissionless show runs at least 10 minutes longer than its material warrants. Still, it’s impossible to ignore that, despite a book and lyrics (many of them unusual sound effects sung by the ensemble) lacking depth and dimension, TAMAR AND THE RIVER manages to remain on the side of the angels, and, like a diamond in the rough, has enough glowing qualities to offset its intrinsic flaws. If you’re looking for something different in musical theatre, here’s something you should find worth your while.
Posted by Samuel L. Leiter at 8:44 AM