131. GRASSES OF A THOUSAND COLORS 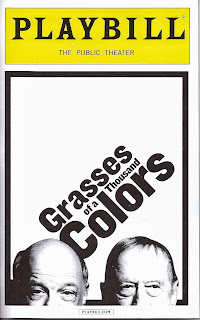 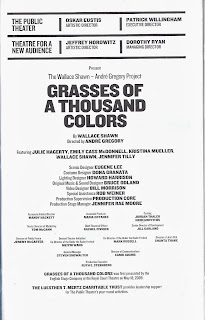 Going to the theatre in Greenwich Village on Halloween can be a bizarre experience. The streets near the Public Theatre last night were creeping and crawling with every variety of human and not-so-human critter, dead, alive, and somewhere in between. As I ate my slices outdoors at Ray’s Pizza, a scraggly guy I took for a homeless man spotted a mirror in the window of the hairdressing salon next door, knelt, and began applying white and black ghoulish makeup to his already ghoulish features. Takes one to know one, they say. I then walked over to the Public, passing a long line of candle-bearing screamers snaking past Cooper Union, and entered the intimate Shiva Theatre to see Wallace Shawn’s GRASSES OF A THOUSAND COLORS, a 3-hour and 10-minute logorrheic exercise directed by Andre Gregory that nearly matched in oddness the weirdness in the street outside. The play is part of a mini-celebration of the 40-year-collaboration between Messrs. Shawn and Gregory, and is being co-presented with the Theatre for a New Audience company. 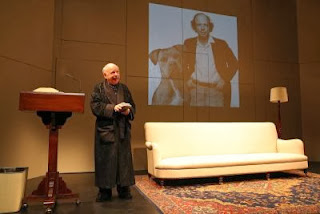 Wallace Shawn. Photo: Joan Marcus.
At the intermission, the woman seated in front of me, said, “This is the most bizarre play I’ve ever seen.” Since Mr. Shawn’s play is nothing if not digressive, let me say a word about this woman, with her air of a stylish, aging socialite. We began to chat when she was concerned about not getting a program. I told her that, as with Shawn’s recent THE DESIGNATED MOURNER in this same venue, programs would probably not be given out until we left. This is simply an oddball quirk of the Shawn-Gregory collaborations; the official, if somewhat dubious reason offered by the theatre’s staff is that they don’t want the noise of fluttering programs to be a distraction. Anyway, the woman was rather friendly, and we yakked about the latest plays, she being an avid theatergoer and even a board member of a well-known New York theatre company. When GRASSES finally ended, she offered her name and we parted, she to the Upper East Side, me to South Queens. On a hunch, I Googled her at home, and found a 1988 interview with her in the New York Times describing her as a Renaissance woman, one of Wall Street’s leading investment bankers, who had lived in Japan and spoke Japanese! Given my own background, this too was a tad bizarre.


I can recommend GRASSES OF A THOUSAND COLORS only for dyed-in-the-wool fans of Wallace Shawn, who not only wrote but stars in this four-character play; they will have more than their fair share of his uniquely avuncular presence to appreciate. They will also have the very special appeal of the voluptuous, throaty Jennifer Tilly; the spirited Julie Hagerty, thin as a rail; and the less well-known and considerably younger Emily Cass McDonnell. Mr. Shawn plays Ben, a doctor/scientist; Ms. Hagerty his wife, Cerise; and both Ms. Tilly and Ms. McDonnell his lovers, Robin and Rose. Another sexual partner, much spoken of, but never seen is Blanche, a furry, white cat. Also important and practically a character in its own right, is Ben’s penis, sometimes referred to simply by that word, and at others as Ben’s dick or member. None of that Sgt. Johnson stuff (see my review of THE BANANA MONOLOGUES) here. Ben says, admiringly: "It's so simple, no eyes, no nose, just a simple mouth." If this keeps up, male genitals will have to become “members” of Actors Equity if they want to work on the New York stage.


The play, first seen at London’s Royal Court Theatre in 2009, consists of numerous monologues, with only a few conventional dramatic scenes. Often, the narrative is shared by two characters, always using direct address, and with only a minimum of stage movement. Mr. Shawn sometimes speaks from a lectern, but, for the most part, the meandering story is told from a long, white couch on an otherwise empty stage, designed by Eugene Lee; there’s a set of closet-like folding doors up center for entrances and exits. The rear wall also serves as a screen for Bill Morrison’s video projections of fields of high grass, for slides (including one of Mr. Shawn as a young man), or for strangely photographed and touched up black and white close-up speeches given by Ms. Hagerty. Most effective in maintaining visual interest in what might otherwise become a sterile landscape is the unusually beautiful lighting of Howard Harrison, which constantly bathes the stage in delicately changing colors (like the names of the female characters), while always keeping the actors highlighted just enough to separate them from the wash of color around them. Bruce Odland’s music and sound design also offer valuable support.


GRASSES, set in the not-too-distant future, begins with Ben, the doctor/scientist, greeting us at a lectern with his doorstopper of a book representing his memoirs. Short and bald, and dressed in slippers and silk dressing gown, he resembles a wannabe Hugh Hefner. He sometimes reads to us from the book, but mostly moves away from it to share with us the story of how he became very wealthy by solving the world's food problems as the inventor of Number One Grain, a product that altered the digestive systems of animals by allowing them to devour others of the same species and thereby greatly multiply while decreasing the need for a dependence on vegetation; not only did herbivores thus become carnivores, the animals also experienced the side effects of a vastly increased sex drive, so pigs, for example, began having sex 15 or 16 times a day, and trying out sexual experiments previously unknown to animals. In this dystopian world, masturbation has become something not to be ashamed of doing in public, just as it’s now okay to have sex with your parents or in front of them.


Soon we’re involved in Ben’s sexual experiences, which include a love affair with Blanche the cat, and with his various orgasmic achievements, with both bestial and human partners. Fantasy and reality collide as we meet his wife and mistresses, one of whom (Rose) first introduces herself with a business card on which there’s a picture of her vagina. Much talk of genitals, especially Ben’s own “best friend,” is aired, usually in matter-of-fact, non-erotic, chatty discourse despite the pornographic content. We also listen to descriptions of violent bloodletting suffered by our offstage feline costar, and to information about the negative impact Ben’s ecological meddling eventually has on people’s lives. The word “vomit,” in fact, is something of a leitmotif.


Perhaps Mr. Shawn wishes to warn us of the dangers of scientific experiment, perhaps not, but whatever his point(s), some casual theatergoers are likely to be more concerned with keeping their eyes open than attending closely to the seemingly never-ending monologues, no matter how charming and affable Mr. Shawn and his able compeers may be. Mr. Shawn being Mr. Shawn, there's a full complement of clever, witty, and even brilliant material spread throughout his maddeningly overblown play. There's only one regular intermission, but some relief arrives at 9:20 when the audience is gifted with snacks (I had a hardboiled egg and a tiny cup of sweet red liquid).  At 10:20 P.M., however, audiences will be glad that his shaggy dog or shaggy cat story has concluded. Actually, I prefer to think of it as a shaggy pussy story, one that could stand a substantial bit of shaving.
Posted by Samuel L. Leiter at 11:40 AM