164. THE PATRON SAINT OF SEA MONSTERS 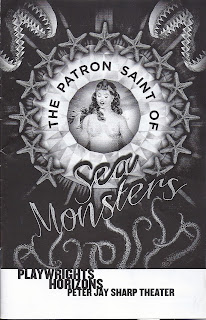 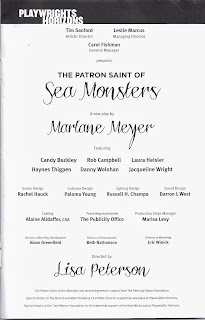 Marlane Meyer’s THE PATRON SAINT OF SEA MONSTERS, at Playwrights Horizons, takes us on yet another journey into the heart of American trailer trash country, this time, as the program informs us, to “a small western town, and the forests that surround it.” This backwoods place is jumping with wife killers (real and suspected), alcoholics, prostitutes with STDs, and various other sorts of human detritus. As expected, the men here—like those in SMALL ENGINE REPAIR—find an endless source of humor in jokes about dick size. Rachel Hauck’s odd, unattractive set is dominated by a clapboard façade that looks like a trailer and serves for various locales; there are bare trees in front of and to the rear of the façade, and whatever other elements are needed are brought on and off by the actors. Stuffed animals, including a fox and a deer, stand about and watch the proceedings. These, combined with the wearing of animal masks by the cast when they move scenery about, are possibly intended to reflect the play’s notion that everybody in the town is enslaved by their irrepressible animal natures. 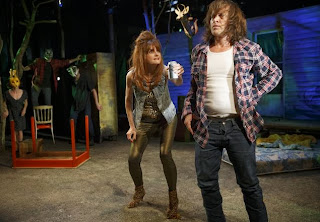 Candy Buckley and Rob Campbell. Photo: Joan Marcus.
It’s in this somewhat nightmarish place that Dr. Aubrey Lincoln (Laura Heisler), a local girl who has become an obstetrician, has chosen to set up a clinic and look for love. (Earlier in the season, the show NOBODY LOVES YOU thought it was funny for the word “ontology” to be confused with “optometry.” In THE PATRON SAINT Meyers tries to have someone similarly thick confuse “obstetrician” with “optician.” This should give you an idea of the writer’s sense of humor.) The altruistic Aubrey is damaged as well, forcing her to clump around with one leg shorter than the other (she calls it “a leg length discrepancy”); she also has a peculiar infatuation for the imaginary Saint Martyrbride, “patron saint of spinsters, childhood infirmity, and sea monsters.”  The bespectacled Aubrey, who normally wears one of those goofy, wool animal hats you see around these days, has an inexplicable thing for the out-of-work, boozing, semiliterate, socially awkward Calvin Little (Rob Campbell), who offed his wife in the prologue. Over the course of the play’s painfully bumpy two hours, Calvin and Aubrey will come together promisingly at a bus stop in New Mexico; he, having served time in prison, where he had time to read, will have morphed from someone who didn’t know the meaning of the words “notice” and “timeline” into something of a philosopher. Books, he claims, have changed his “inner monologue.”
Meyers’s surrealistically bizarre black comedy mingles exaggeratedly farcical acting with realistic performances. Fantasy elements, such as the frequent appearance of Saint Martyrbride (Jacqueline Wright) fake-swimming across the stage along with a stuffed whale held by an actor, or all those actors wearing animal masks, coexist uncomfortably with straightforward realism. Under Lisa Peterson’s energetic direction, six actors play seventeen parts, some of them so over the top you have to appreciate the actors for their lack of inhibition. Candy Buckley stands out for her three roles, especially as Calvin’s big-haired mother in leopard-spotted tights. Jacqueline Wright, in four roles, can be pretty nutty too, but the show itself never coheres and, for all its occasional insights and commentary on a wide number of subjects, including the current state of the American economy (“NAFTA my ass!”), it’s more of a turn-off than a turn-on. I suggest an intercession by the patron saint of playwrights.