195. Review of LE JAZZ HOT: HOW THE FRENCH SAVED JAZZ 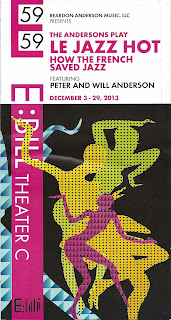 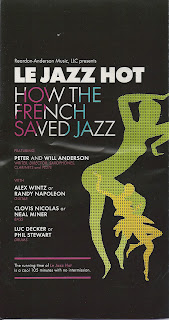 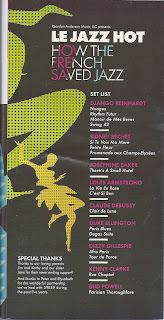 Peter and Will Anderson, the exceptionally talented, identical twin musicians who have been appearing at 59E59 for the past five years and who last season created a show about Tommy and Jimmy Dorsey, are at it again. This time it's LE JAZZ HOT, a concert-like revue featuring the music of Django Reinhardt, Sidney Bechet, Louis Armstrong, Duke Ellington, Dizzy Gillespie, Kenny Clarke, and Bud Powell, with a jazz version of Claude Debussy’s “Claire de Lune” and a highlight segment on Josephine Baker. 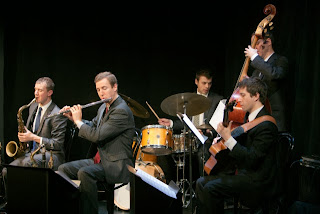 LE JAZZ HOT. Photo:Eileen O'Donnell.
The musicians are crammed onto a tiny stage in one corner of Theatre C, the smallest venue at 59E59, and the room itself is arranged like a cabaret, with many tiny tables, each covered in a red over a white tablecloth; each also comes with a single candle and a flower. Around the space, the walls are adorned with musical instruments and photos of the great jazz stars honored by the show. 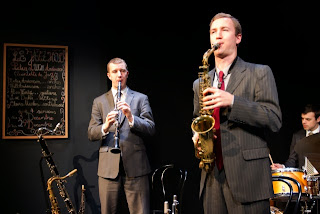 Although the Andersons—clarinet and saxophone players (Will also plays the flute)—are featured at each performance, alternate musicians are listed for the rest of the band. When I saw the show, Clovis Nicholas was on bass and Luc Decker was on drums, but neither of the guitarists in the program was present; instead, Vinnie Raniolo was sitting in, and doing a terrific job. All the musicians dress soberly in conventional suits and ties (the Andersons are in gray pin-stripes), and all have serious demeanors, although I did detect just the vaguest of smiles from Mr. Raniolo. There is no showboating here, just business, the business of playing great jazz greatly. One of the Anderson twins, Will, I believe (telling them apart’s not easy), does most of the narrating, with his brother occasionally jumping in. Mr. Raniolo got to tell an anecdote, but that was about it on the speaking side. The Andersons are pleasantly bland (or blandly pleasant) personalities; charisma, at least when speaking, is not their strong suit.


During the interstices between musical numbers in the 105-minute, intermissionless show, projected videos and stills showing Reinhardt, Bechet, et al., are shown, with a recorded voiceover by Will Anderson (my guess) that sounds much like a high school student reading a report in front of his class. He earlier apologized for his poor French pronunciation (“dieu” sounds like “do”), which is excusable, but there’s no excuse for pronouncing “Ziegfeld” as “Ziegfield.” The point of all this is to teach us how important France was to the maintenance of the jazz tradition, since it was there that the art survived when it seemed on the verge of extinction in America, especially after World War II, when a number of major African-American musicians found a warm welcome from French audiences and aficionados. Many will find the overview and anecdotes fascinating; jazz fans are likely to find much of it old hat.


It's not long before the show takes on the format of a lecture interrupted by musical selections, but those selections are superbly played, so there’s an artistic payoff for having to sit through clips and stills that may already be familiar to you. Glum as they may seem individually, the band members render the 17 songs on the bill with superb musicianship. There are no vocals at all. Most of the songs have a French theme or even title, and include “Nuages,” “Rhythm Futur,” “Petite Fleur,” “La Vie en Rose,” “C’est Si Bon,” “Paris Blues,” “Afro Paris,” “Rue Chaptal,” and “Parisian Thoroughfare.” Among the video clips is one from the Paul Newman-Sidney Poitier film, PARIS BLUES, about American musicians in Paris. Closing out the program is an extended sequence from the great French film, THE RED BALLOON, accompanied by a jazzed-up arrangement of “Clair de Lune.”
Conceptually, LE JAZZ HOT is not so hot, but musically, as Cole Porter said of Paris in the summer, it sizzles.
Posted by Samuel L. Leiter at 8:30 AM