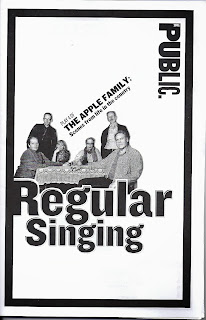 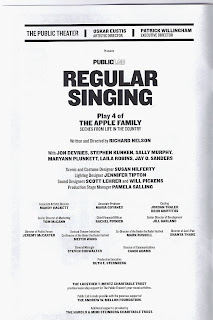 There are few theatergoing pleasures in the Big Apple like sitting through the plays in Richard Nelson’s series, The Apple Family: Scenes from Life in the Country. The final installment in the four-play series, REGULAR SINGING, is now playing at the Public Theatre’s Anspacher Theatre in repertory with the earlier entries, THAT HOPEY CHANGEY THING, set on midterm election night, 2010; SWEET AND SAD, set on the 10th anniversary of 9/11; SORRY, set on election night 2012; and REGULAR SINGING, set on the 50th anniversary of JFK’s assassination. In each of these plays, the Apple family of Rhinebeck, New York, come together to deal with some issue and, as families do, drift conversationally from one subject to another while also now and then commenting on the current political situation. The Apples are liberals with an aversion to the term “progressives,” but even if you don’t agree with their politics, being in their intelligent but never aggressively argumentative company is worth the trip. 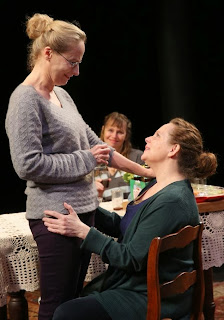 
Prior to seeing REGULAR SINGING, I’d seen only SORRY (twice), and will catch up with the other two soon, but from what I’ve read I expect they will be in the same vein. In the elegiac REGULAR SINGING, the occasion that draws the family to the Rhinebeck homestead late at night on November 22, 2013, is the imminent death from cancer of Marian Apple’s (Laila Robins) former husband, Adam (not seen), who is being taken care of here by his ex-wife and her sister, Barbara (Maryann Plunkett), a high school English teacher. Death, in fact, becomes the subtle through line of the play. Present as well are Barbara and Marian’s brother, Richard Apple (Jay O. Sanders), a successful lawyer who works for Gov. Cuomo, lives in Albany, and is in the process of a divorce from his wife, Pamela; another sister, Jane Apple (Sally Murphy), is a nonfiction writer who lives locally with her actor boyfriend, Tim Andrews (Stephen Kunken), who waits on tables at a Rhinebeck restaurant; and there is the gentle old Uncle Benjamin Apple (Jon DeVries), a formerly well-known actor who suffered amnesia after a heart attack and had to move into assisted living.


Everybody is very well-read and the evening is essentially an ongoing conversation in which each character tells one or more stories, either anecdotes from their personal experience or a recounting (or reading) of something they’ve found in a book, but always during the flow of normal-seeming talk; something someone says sparks a new line of talk, or a pause in the conversation forces someone to fill in the blank space. We learn about the Rhinecliff train station’s connection to Lincoln’s funeral train, as well as other historical facts about the area. There is talk about the reality of acting, about “speech acts” by which what one says can be considered a physical activity, about Samuel Beckett’s directing of KRAPP’S LAST TAPE, about Scheherazade and the Arabian Nights, about how “Washington Crossing the Delaware” came to be painted, about the permanence of Facebook postings, about how people cope with disabilities, about the process of evaluating the financial value of a life, and so on. The mentioning of the  news and names of the day easily catches our ears; it would seem that the writing continued right up to the time of the opening as there were references to events in Dallas on November 22. We hear the names not only of the current governor of New York (Richard’s job allows him to throw soft barbs at “Andrew”), but references to Bill de Blasio, Kirsten Gillibrand, and Obamacare.


Most of the chatter has no specific plot-driven purpose, although it is often interrupted by personal discussions, such as the sisters’ concern for Richard’s living alone in Albany and their wish for him to come live with them in Rhinebeck. Barbara’s work as a teacher inspires a segment where she reads student comments on the meaning of death, with comments from her family. Barbara also offers a close parsing of Tom Wicker’s New York Times essay on Kennedy’s killing. There is considerable converse about preparations for Adam’s funeral, with some beautiful singing of the hymns (with religious references removed) planned for the occasion. Laughs and tears are shared, no one quarrels angrily, even when they disagree, and a sense of family love, caring, and respect touches all that these people say and do.


Much less than in the plays of Chekhov, which are clearly Mr. Nelson’s inspiration, does anything dramatic happen. Thus the play, which runs an intermissionless 90 minutes, could probably be shortened by at least 10 minutes, as even listening to the Apple family can eventually lose some steam. Happily, the ensemble performing REGULAR SINGING, which also appears, more or less, in the other Apple plays, is one of the finest on the New York stage, and previously has been awarded for its artistic excellence. Stephen Kunken and Sally Murphy are new (replacing Shuler Hensley and J. Smith Cameron) but the others have been with the plays from the start. Under the playwright’s direction, we get three-dimensional characterizations and witness people who actually seem to be talking to and listening to one another; the performances have that overheard, naturalistic quality we associate with the best TV and film acting, where we become intimate with the people on the screen in a way that the theatre, because of its need for size and scope and projection, often loses. Rather than selecting any single actor for commendation, I prefer to applaud the company for its nearly seamless unity.


As with the other plays, the minimalist set is simply a couple of old Persian carpets, a dining room table, and chairs. The audience sits on three sides of the space and the lighting sensitively captures the quiet warmth of a family gathering. As the play progresses, scenes fade out and restart several minutes later, the transitions suggested by casting low intensity lighting on areas of the audience itself before the stage lights come up again. The actors themselves take off and bring on props as needed, just as they’d do if they were at home.


If what you seek in the theatre is strong dramatic action, surprising revelations, fiery confrontations, and pointedly polemical ideas, this will not be what you’re after. But if you want an evening with some nice folks, the kind you might already know, who won’t challenge you but through whose ordinary lives you may learn something of what being part of a cohesive and loving family means, REGULAR SINGING may be the music you wish to hear.
Posted by Samuel L. Leiter at 11:32 AM