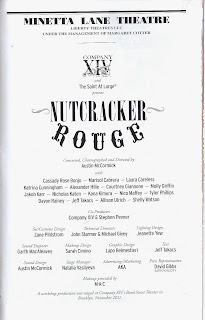 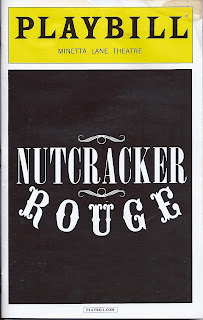 If the first things that come to mind when you think of THE NUTCRACKER are tits and ass, g-strings and pasties, boy, do I have show for you.


THE NUTCRACKER, with its familiar score by Tchaikovsky, is undoubtedly one of the most popular pieces in the American ballet repertory, if not the most popular. Based on a story by E.T.A. Hoffman, itself adapted from a work by Alexandre Dumas père, it premiered in St. Petersburg, Russia, in 1892. Although originally not successful, over time it became internationally famous and received many stagings; in the U.S.A. its enormous popularity began in the 1960s when it started to appear as a regular feature of Christmas programming. Although there are several mainstream versions by famous choreographers, there are also revisionist, eccentric, offbeat, satiric, and parodistic renderings, both those by important choreographers such as Matthew Bourne and Mark Morris and those by others who see opportunities in the material of which Tchaikovsky couldn’t even have dreamed. Last season, for example, New York saw CHRIS MARCH’S THE BUTT-CRACKER SUITE: A TRAILER PARK BALLET, with its dancing beer cans and Wonderbread ballet, while this year we have NUTCRACKER ROUGE, in which boobs and butts vie for your discerning attention. 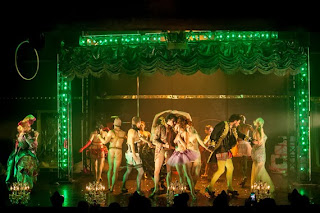 
As shows like Off-Broadway’s recent, well-received EAGER TO LOSE, can attest, burlesque continues to appeal to audiences when done with the right mixture of naughty and nice, while shows like LA SOIREE, MOTHER AFRICA, and CIRKOPOLIS reveal an ongoing taste for intimate circus acts requiring beautiful bodies combined with outstanding physical skills. In NUTCRACKER ROUGE, a baroque-burlesque-circus adaptation of THE NUTCRACKER is pretty much what has been conceived, choreographed, and directed by the inventive Austin McCormick, working under the aegis of Company IV and The Saint at Large, at the Minetta Lane Theatre in Greenwich Village.


When you enter the theatre you're struck by the hazy, red-lit ambience, with small crystal chandeliers lining the lip of the stage like elaborate footlights. A false metal proscenium is a bit upstage, its frame filled in with a silver festoon curtain that rises and falls with each new scene. Mr. Drosselmeyer (Jeff Takacs) and Mrs. Drosselmeyer (Shelly Watson) are the evening’s hosts, he wearing a bushy gray wig, and a black period costume with gold trim,  and she being a campy soprano of very ample proportions—sort of a combination of Divine and Mae West—dressed in an assortment of extravagant gowns, hairdos, and other furbelows as the evening proceeds. Only the Drosselmeyers speak actual lines, while everyone else confines themselves to looking hot and dancing, singing, or doing some specialty act. The wordless heroine is here called Marie-Claire (Laura Careless), seen as a figure from the time of Marie Antoinette (the French Revolution is referenced), who appears throughout wearing a low-cut gown with wide panniers. By the time of the final pas de deux, danced with Alexander Hille as the Nutcracker Prince, she evolves from innocence to sexual pleasure, as marked by the radical elimination of her clothing. 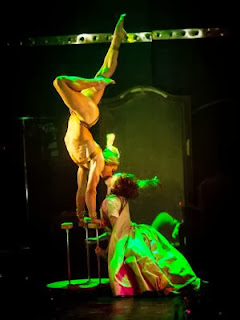 
Only vestiges of THE NUTCRACKER story remain, but fans will recognize those that do. Essentially, though, the famous ballet is used to provide a context for a series of musical numbers combining song, dance, and acrobatics, with a company of buff young men and women who generally walk around in skimpy costumes, the men in a variety of g-strings with ornate codpieces and exposed tushes, the women with varicolored bra and panty outfits, also with lots of derriere flesh exposed and, in some cases, exposed breasts covered with sequined pasties. Some often spectacular and colorful costumes reach the stratosphere of high camp, and there is a definite throughline of homoeroticism in the haze, especially with all the routines using men wearing tutus and partial bustiers. Some material delves into themes of domination and submission, and some into farcical sex acts, including a man wearing a giant phallus half his size. Despite the attitude of “anything goes” sexuality, too much is overdone and the emphasis on tastefulness makes the eroticism more subtle, perhaps too subtle. I can say that the men’s well-toned bodies are mostly what you’d expect from professional dancers and acrobats, but feminist friends will call me a sexist pig if I describe my reactions to the women’s bodies, so I’ll hold my peace (that’s p-e-a-c-e, if you don’t mind!) about them. Also, while there’s a valiant attempt to make NUTCRACKER ROUGE a comic romp, much of the would-be bawdy humor falls flat.


What the show has going for it are its energetic and talented performers, Zane Pihlstrom’s vivid costumes and settings (much of the latter evoking the backstage world of a theatre troupe), Jeanette Yew’s creative, if sometimes too dark, lighting, Sarah Cimino’s stylized makeup designs, and Mr. McCormick’s eye-catching choreography. The music is both from Tchaikovsky’s well-known score and from modernized arrangements of it, as well as from a repertory of familiar standards. Thus, when the theme of a Candyland world is invoked, Ms. Watson, hand-held mike at the ready, launches into a rendition of “Candy,” the one that goes, “Candy, I call my sugar Candy, Because I'm sweet on Candy and Candy's sweet on me.” Ms. Watson's other songs include an operatic selection and "I've Got My Love to Keep Me Warm." Bouncy prerecorded songs include Charles Trenet’s once-popular French ditty, “Boum.” In keeping with the theme of a Kingdom of Sweets, choreographed routines with sexual underpinnings involve cherries, candy canes, Turkish delight, and licorice boys.


Some numbers are straight from the circus-act world, including the cyr wheel, with which one or two performers do an acrobatic dance routine using a large single hoop that rolls about the stage in different patterns. Courtney Giannone’s performance differs from a similar act in CIRKOPOLIS, covered in my next review, in that she does it with her breasts exposed. There’s also contortionist Cassady Rose Bonjo; hoop aerialist Nico Maffey; voluptuous singer Katrina Cunningham; a hand-to-hand male balancing act; a flamenco strip-tease; a pole dancer; a silly bit in which a flamboyant male dancer emerges from a cake and camps it up as the music blares, “If I Knew You Were Coming I’d Have Baked a Cake” (which I sang in a hotel show when I was 10); an all-male, Matthew Bourne-type ballet; a topless pas de seul Sugar Plum Fairy dance, and so on. The cast is made up of highly trained pros who provide polished dance and acrobatic performances.


My companion, who saw Alexey Ratmansky's NUTCRACKER at BAM only last week, called this one “THE NUTCRACKER on steroids,” which is about as fair a description as it deserves. I would have liked its wide variety of numbers to have been better integrated, for them to have made more sense in THE NUTCRACKER context, and for the show to have been funnier and sexier than it is. The audience, however, seemed to be having a good enough time so there’s no need for me to keep cracking its nuts before I move along to CIRKOPOLIS, the last show I’ll be seeing in 2013.
Posted by Samuel L. Leiter at 7:24 AM