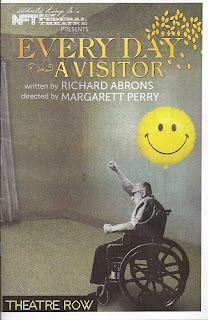 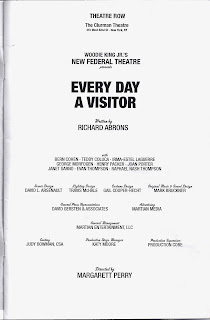 This sketchy comedy, by 86-year-old philanthropist Richard Abrons, whose name is closely associated with the Henry Street Settlement, was originally done at the McGinn/Cazale Theatre in 2001; a dozen years later, when most of the characters in its old age home would presumably have passed away, it’s being revived at Theatre Row’s Acorn, and none of the references that would have been plausible in the context of its characters in 2001 appear to have changed. Still, if we stretch our imaginations a bit, we can perhaps accept that a mostly Jewish group of alter cockers spending their last days in a decaying Bronx nursing home would still, even in 2013, be dancing to Glenn Miller records, commenting on Neville Chamberlain, and singing 1930s  union protest songs about Joe Hill. 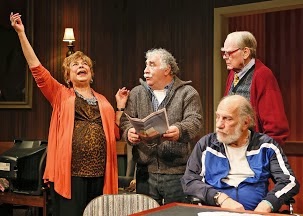 From left: Janet Sarno, Teddy Coluca, Bern Cohen, Evan Thompson. Photo: Ronald L. Glassman.
Mr. Abrons’s only sporadically amusing two-act play, directed by Margarett Perry and
produced by Woodie King, Jr.’s New Federal Theatre, takes place in the home’s commons room, designed by David L. Arsenault. The place is supposed to be shabby but the impression is of a rather spiffy place. When needed, one wall revolves to bring a sickroom on. Travis McHale’s lighting, Gail Cooper-Hecht’s costumes, and Mark Bruckner’s music and sound design round out the other creative components.


The plot brings together seven elderly characters who will be recognizable to anyone who grew up in New York in the last half of the 20th century. Six are Jews and one is Italian-American, the sole goy. There’s the wheelchair-bound Feltenstein (Bern Cohen), a blaring kvetch who’s constantly starting fights with Figliozzo (Teddy Coluca), a bantam-sized guy, with one guy calling the other a wop and being called a kike in return. Mrs. Levy (Joan Porter), a delicate blonde, can’t help farting (blame it on the bean-heavy meals), while the pleasingly plump Mrs. Marcus (Joan Sarno) can’t help flirting. Among the other residents is Stoopak (George Morfogen), a former lawyer, who stays to himself while the others busy themselves mostly by playing bridge. A kindly black caretaker, Bob (Raphael Nash Thompson), and a friendly Hispanic nurse, Maria (Irma-Estel LaGuerre), keep loving watch over the guests.

There are no villains here other than old age and boredom. As someone says, "Time is the enemy, not death." Cards, bickering, off-color cracks, and threadbare reminiscences occupy people's time. Everyone complains about the poor food and the lack of attention they get from their families until Figliozo gets the idea that they can wake up their sleepy lives by each of them pretending to be some important political figure, mainly from the past. Figliozzo chooses to be Mayor LaGuardia, Mrs. Sarno becomes Bella Abzug (and, later, Golda Meier), Mrs. Levy becomes head of the EPA (which someone else keeps calling the WPA), Feltenstein becomes Henry Kissinger, and others become Alan Greenspan and John D. Rockefeller. Stoopak is drawn out of his funk when the group names him president, and suddenly everyone, including Stoopak, has found a new lease on life.

Stoopak’s presidency establishes two rules: 1) enjoy yourself, 2) if anyone gets sick, be sure they have a visitor every day, ensuring that no one ever feels alone. When Stoopak becomes mortally ill, rule #2 kicks in. Meanwhile he laments his misdeeds: "I should have gone to temple." Near the end of the play, Mrs. Lowenstein (Ms. LaGuerre), arrives to take Stoopak’s place; thinking she’s entered a nut house, she’s ready to run but the others quickly draw her into their fantasy and soon it’s party time again, with Glenn Miller, at the swinging old folks home.


EVERY DAY A VISITOR, originally published as a short story, is a corny, schmaltzy, and barely funny exercise intended to demonstrate the importance and dignity of our geriatric citizens. Its actual effect, however, is to show its seniors as ditzy, quarrelsome, and childish. The best thing that could be said for it is that it provides work for a sizable group of vividly enthusiastic senior actors , and offers the always estimable Mr. Morfogen a juicy role into which to sink his dentures.

Although attendance was low when I saw it, and even lower after intermission. I suspect there's an audience out there for EVERY DAY A VISITOR. It might be easier, however, if the play visited them instead of vice-versa.